The ACC, one of the Instruments of the Anglican Communion, consists of representatives from the Provinces of the Communion, and meets approximately every three years. The meeting in Hong Kong brought together more than 100 members from the 40 provinces of the Communion. Archbishop Kay Goldsworthy (Perth), Archdeacon Arthur Copeman (Newcastle) and Mr Garth Blake (Sydney) are the current Australian members of the Council.

The Council’s role is to facilitate the cooperative work of the churches of the Anglican Communion, exchange information between the provinces and churches, and to help coordinate common action. It advises on the organisation and structures of the Communion and seeks to develop common policies with respect to the world mission of the Church, including ecumenical matters.

The theme of ACC-17 was ‘Equipping God’s People – Going Deeper in Intentional Discipleship’. The Council received reports on different topics and issues, including intentional discipleship, ACC work at the United Nations, women in church and society, ecumenical initiatives, Anglican Communion networks and theological education. Presentations were given by the Directors of program areas at the Anglican Communion Office on their work over the past three years.

As well as receiving these reports, the program of the meeting included daily Bible studies and worship, presentations, framing and agreeing to resolutions and briefings on a wide range of ministries. There were also opportunities for members to visit local parishes and see their social ministry work.

Resolutions arising from the reports and presentations covered areas such as the Marks of Mission, Unity, Faith and Order, and Governance. These resolutions can be found on the Anglican Communion website.

During the Eucharist held in Hong Kong’s St John’s Cathedral to mark the end of the Council’s meeting, the Chair of the ACC, Archbishop Paul Kwong, Primate of the Anglican Church in Hong Kong, said in his sermon that hospitality was central to the conversations during ACC-17. He affirmed “how important the simple actions of giving and receiving, of taking care of one another, of loving one another, are in our Christian lives together.”

He also spoke about what it is to be a practical Christian. He challenged the congregation to love each other even when they disagree. 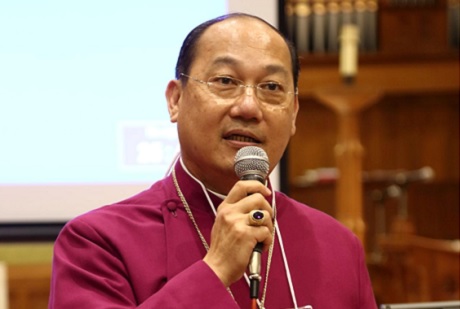 Towards the end of the Eucharist, the Archbishop of Canterbury, Archbishop Justin Welby, commissioned the Council members, the Standing Committee and the staff of the Anglican Consultative Council to work together to advance God’s mission worldwide.