Friday 9 August was the International Day of the World’s Indigenous Peoples. To mark it, the Anglican Communion News Service spoke with a youth representative on the Anglican Consultative Council, Canon Isaac Beach, from the Anglican Church of Aotearoa, New Zealand and Polynesia. Canon Isaac, a Maori of Ngāti Porou, Ngāti Kahungunu and Ngāti Rangitihi descent, is Kaikarakia (prayer leader) at Saint Luke’s in Paki Paki, a village on Aotearoa / New Zealand’s North Island.

“Kia Ora to you all my fantastic Anglican brothers and sisters and greetings to you in the name of our Lord and Saviour Jesus Christ,” he said.

“I would like to share with you some news about our youth ministry in Te Pihopatanga o Te Tairāwhiti (the Diocese of Te Tairāwhiti).

“Recently, six indigenous youth from my diocese visited Pine Ridge Reservation in the [US-based Episcopal Church’s] Diocese of South Dakota, where we spent two weeks in cultural exchange and indigenous mission with the Red Shirt community of Lakota/Oglala nation.

“I strongly believe exposing our young people to international experiences through indigenous exchange is critical to informing how they can live a Christ-centred life. It is a wonderful tool for intentional discipleship.” 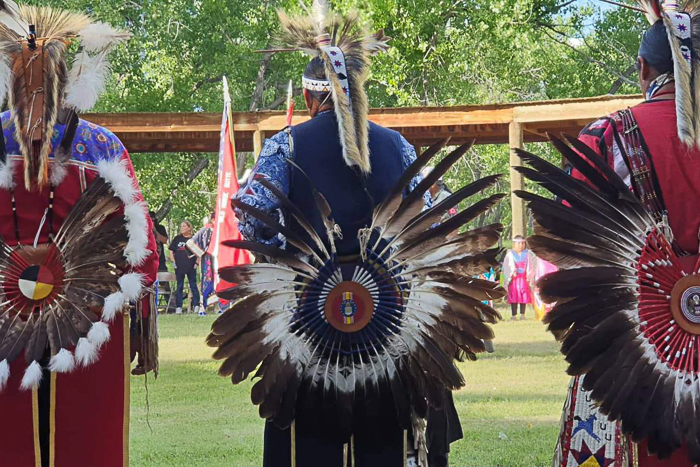 Isaac described some of the challenges facing the Lakota youth – and community generally – writing “Pine Ridge Reservation has the highest level of youth suicide in the US. It also has the lowest level of socioeconomic indicators across the US proportional to the average. Like most indigenous peoples, they are over-represented in prisons on a per capita basis and have the lowest life expectancy.

“Māori youth find common ground when they hear these stories from our Lakota brothers and sisters as we suffer from the same realities in our community in Te Tairāwhiti – the direct result of systematic oppression afforded to our people through colonisation of our ancestral lands.

“The local water supply is not potable, so they source their water via a pipeline from the Missouri River. However, the Trump administration allowed an oil pipeline to be constructed underneath the Missouri River (you may have seen the protests of Standing Rock), which places the water source (and the climate) at risk.

“Please pray the oil doesn’t leach from the pipeline, contaminating the Missouri water. Contamination will severely impact water security and commercial agricultural activities for both Lakota/Oglala nations but also many other indigenous reservations”.

Isaac described how, during the exchange, Māori youth from Aotearoa appreciate the opportunity to enter into relationship with Lakota/Oglala youth, “contributing to their aspirations of reaching self-determination, within the confinement of what their political and economic realities permit.”

And throughout the visit, the two communities shared some of the richness of their respective indigenous cultures, as illustrated in the photographs below.

The Māori group is aiming to host Lakota participants in 2020 in Aotearoa/New Zealand. Isaac asks for prayer support for this, saying: “as is the problem most times in indigenous mission, we are short on financial resources, so to make this happen we have to raise the funds. Prayers in this area would be helpful.” 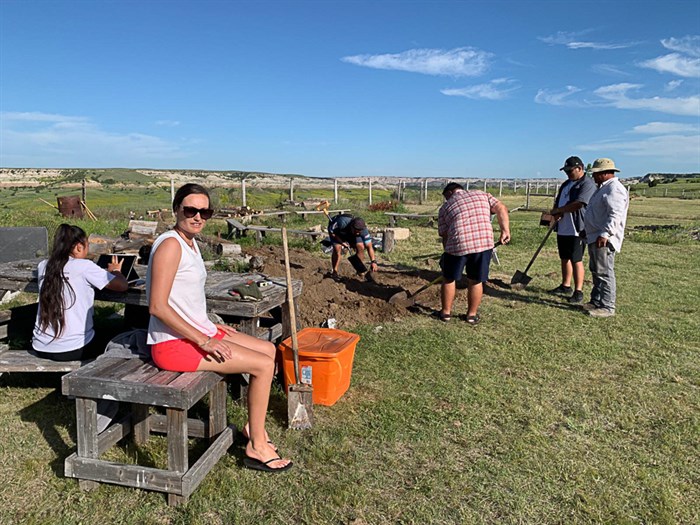 Māori hāngi (traditional form of cooking in the earth using heated volcanic stones). As part of the exchange we taught the Lakota people how to cook our traditional staple foods: tatanka (buffalo) and timpsila (wild native turnips) using māori hāngi. The picture above shows the men beginning to unearth the food. 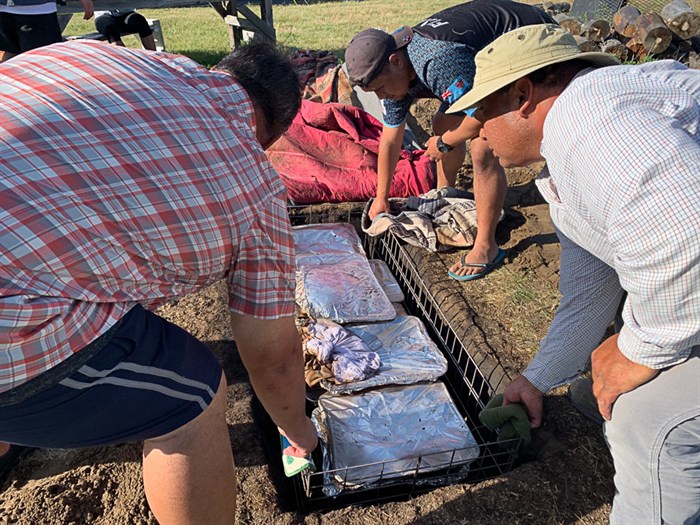 The men removing the food from the earth. The food sits atop hot volcanic stones that were heated with fire and wood prior to placing the food in the ground. 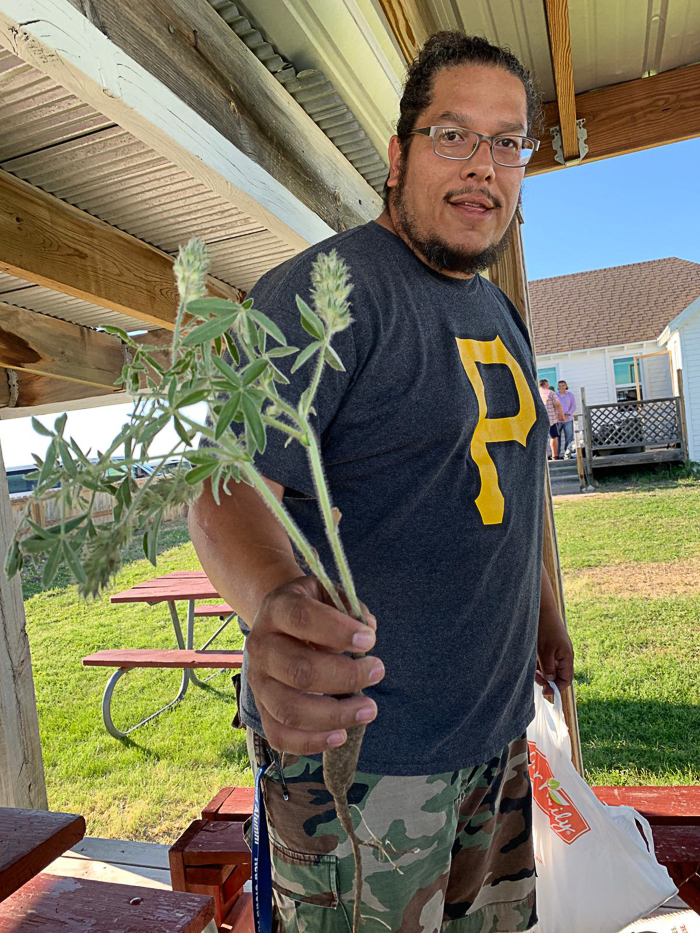 Lance Fast-Wolf (real name translated into English), holds in his hand a timpsila (native turnip) that grows wild on the reservation. He had just gathered a bunch for the hāngi. 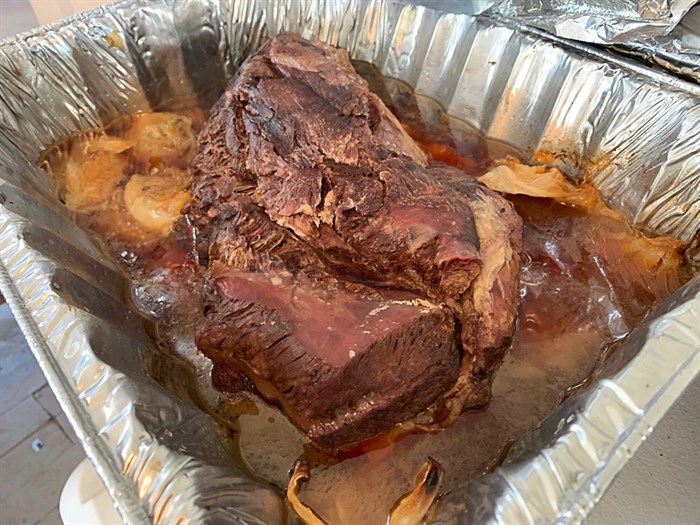 A portion of tatanka (buffalo) prepared in the hāngi (traditional earth oven). It tastes incredible cooked in the earth. 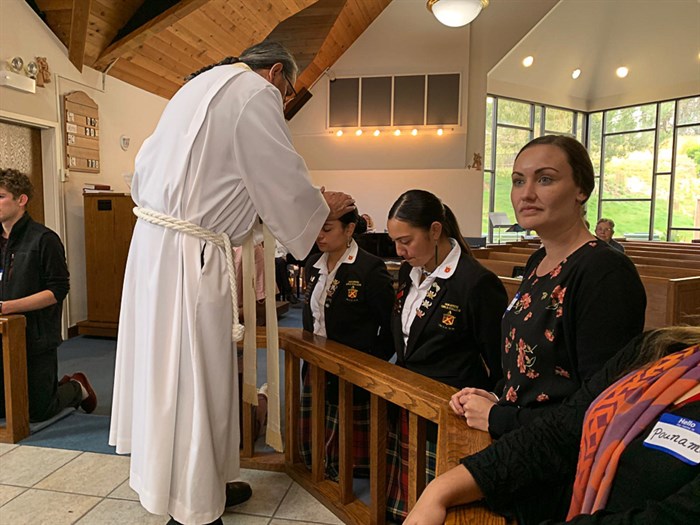 The Rev’d Canon Robert Two-Bulls in the laying of hands, commissioned our youth participants at St Mary’s Episcopal Church in Lompoc California prior to us making the long journey to PineRidge Reservation in South Dakota. Here we meet with participants from the Diocese of Los Angeles, our Companion Diocese.

In his final words Isaac challenges the member churches of the Anglican Communion by stating: “What this form of ministry has taught me is that the Anglican Communion and all of its member churches must seek to indigenise their political systems and various political institutions in a way that enables self–determination for indigenous Christian peoples.

A reading in Māori (indigenous language of Aotearoa / New Zealand)

You are the salt of the earth; but if salt has lost its taste, how can its saltiness be restored? It is no longer good for anything, but is thrown out and trampled under foot. You are the light of the world. A city built on a hill cannot be hid. No one after lighting a lamp puts it under the bushel basket, but on the lampstand, and it gives light to all in the house. In the same way, let your light shine before others, so that they may see your good works and give glory to your Father in heaven.