St George’s College, an Anglican “centre for pilgrimage, hospitality, study and reconciliation” in Jerusalem, has celebrated its 100th anniversary with a special service in the neighbouring St George’s Cathedral. The Bishop of London, Sarah Mullally, preached at the service, which was presided over by the Anglican Archbishop in Jerusalem Suheil Dawani.

In a post on its Facebook Page, the College said that “for the first decades of its life it was more of an idea than a reality although in the 1930s summer schools were run for Church of England clergy. College buildings were first constructed in 1962 and then year-round courses started to be run. Today we are a thriving centre for pilgrimage, study, hospitality and reconciliation.”

Speaking to ACNS, the Dean of St George’s College, Canon Richard Sewell, said: “we receive pilgrims from all over the world who come for a period of a week or two weeks to see the holy sites and to learn about the issues – contemporary and historical – in this incredible country.”

The college was founded in 1920 by the then-Bishop of Jerusalem, Rennie MacInnes, “who had a vision of training local people to be priests in the newly formed Diocese of Jerusalem; and so originally it was going to be a seminary”, Richard Sewell said. “But that never quite came to fruition . . . although plans were being put in place and the foundation of the name was 1920.”

Today, the college runs pilgrimages and short courses for Anglicans from across the Anglican Communion – a ministry which dates back, Richard Sewell said, to those 1930s summer schools. Local Ordinands receive their training at the Near East School of Theology in Beirut, Lebanon; and the Virginia Theological Seminary in the United States.

“Our most popular study pilgrimages are The Footsteps of Jesus – that would be a very traditional [way to] see the main holy sites here in Jerusalem [and] up in the Galilee. We also do one called the Palestine of Jesus, and that looks a little bit more widely at the archaeology. We also do specialist courses like Women in the Bible. We do a very important interfaith course once a year for Christians, Jews and Muslims to come and visit each other’s holy sites and then dialogue about that experience.” 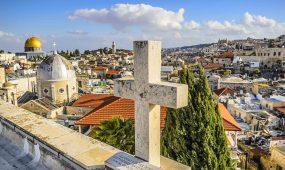 Many of the course participants come from the Church of England and the US-based Episcopal Church. One of Richard Sewell’s priorities is to expand the take-up from Churches in Africa, Asia and South America in particular. “That’s one of the big challenges”, he said, “how to attract people coming from countries who have no tradition of coming to St George’s: that will make us a resource for the whole Anglican Communion.”