More than three million people have listened to a hastily arranged service for Mothering Sunday led by the Archbishop of Canterbury, Justin Welby. The service was recorded in the crypt chapel at Lambeth Palace in a room which contained just five people – including those taking part. The music was recorded by four singers at the nearby Church of St Martin in the Fields in Trafalgar Square. The service, which was broadcast in audio across BBC Radio in the UK and in video on the Archbishop of Canterbury’s Facebook page, was one of a many online services staged across the world in response to the COVID-19 pandemic. 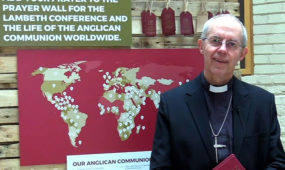 “The Archbishops [of Canterbury and York] said earlier this week that church would have to be reimagined”, a spokesperson for the Church of England said.

“Across the country today, local congregations did just that, meeting via video conferencing.

“People from around the world joined the service in the crypt chapel on social media and by radio. Thousands of church-run social projects are responding to the newly created needs via foodbanks, homeless outreach and informal networks at a parish level. We’ll continue to look at innovative ways of being Church.”

The communications team at the Anglican Communion Office will seek to highlight online resource material to help Christians find broadcast acts of worship near them. Details will be published on the official website: anglicancommunion.org.