Christians from the Diocese of Daejeon in the Anglican Church of Korea are sending a package of aid to the Episcopal Church’s Diocese of New York. Members of the diocese collected 5,000 face masks, 3,000 bottles of hand sanitiser, and 3,000 sets of protective clothing.

They were collected in Holy Week, as preparations were underway to turn the Cathedral Church of St John the Divine in New York into a field hospital. Those plans have been put on hold as health officials in the city of New York say that the extra emergency beds are no longer needed.

On Easter Monday (13 April) the aid package was blessed during a service at Wonseongdong Cathedral in Cheonan before being shipped to the United States.

“The living Jesus Christ keeps telling us to love each other regardless of size, race or any differences among us”, the Primate of the Anglican Church of Korea, Archbishop Moses Nagjun Yoo, said. “This is the moment that the Word works out through the two connected Churches in Korea and the US…Warmest hearts and lots of prayers go together with the hope of resurrected life of Jesus Christ to overcome COVID-19 for all in the package of aid”.

Archbishop Moses said that it was a reversal of the usual pattern of aid being sent to Korea from the United States. In the service of blessing on Easter Monday, he told the congregation that “through this blessing prayer, we are going to dedicate this world to God. It is God’s, and it is a place to serve God. In the meantime, it is a place to remember and repent of turning away from God, and to re-establish a relationship with God.

“It’s amazing that our smallest diocese sends the aid to the largest diocese of New York”, he said. “This is like Saint Paul, the smallest of the apostles, working with God’s favour – see 1 Corinthians 15:10. Today, God uses Daejeon Diocese as a tool of grace to give the same role as the apostle Paul.”

Elsewhere, the Internal Province of Ghana in the Church of the Province of West Africa has donated 60,000 Ghanaian Cedi (GHS, approximately £8,500 GBP) to a national COVID-19 Trust Fund established by Ghanaian President Nana Addo Dankwa Akufo-Addo.

The funds were presented to the President’s Chief of Staff, Frema Opare, by the Bishop of Accra, Daniel Torto, alongside a delegation which included Archdeacons Dr Joseph Lankwei Lamptey of Accra East and John Antonio Tello Nelson of Accra West; and Dr George Kotei Neequaye, the Dean of the Cathedral Church of the Most Holy Trinity. 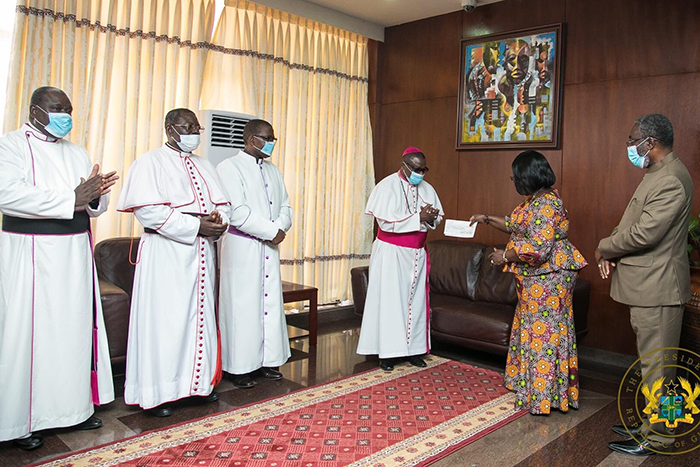 At the handover ceremony, Bishop Daniel offered prayers for the nation.

In England, a church in the Somerset city of Bath has been temporarily converted into a production line making face shields for use within the UK’s National Health Service (NHS). In the first three weeks of operation, more than 16,000 face masks have been sent to NHS hospitals across the country; and thousands more are on order.

The scheme was established by Edward Chudleigh, a former engineer with the firm Dyson, to deal with the increased need for personal protective equipment (PPE).

He began by producing them in small numbers in his basement, but the new assembly line at St Michael’s Without the Walls in the centre of Bath is churning out one mask every minute.