As I am a cradle Anglican, I have been aware of Mission To Seafarers’ (MTS) wonderful work all my life. It was while attending a key Diocesan event in the early 2000s, Synod I think, that I first met The Rev’d Bill Pearson who was the then Chaplain of MTS Brisbane. I was struck by his complete dedication to seafarers and his enthusiasm was absolutely contagious.

I am also connected to MTS internationally through my brother, Michael, who is a retired Anglican priest and former MTS chaplain of the Ports of Schiedam (in the Netherlands) and Mombasa (in Kenya), where I visited him in the 2000s. While observing his ministry in Kenya, I was moved by some of the heart-wrenching stories I heard about seafarers, especially those who worked on ships that became bankrupt on the journey leaving them unpaid after months of work or left stranded and forced to return home requiring them to pay for their own airfares. My brother also had to minister to seafarers who were traumatised following high-sea piracy attacks.

In the late 1990s when my husband Allan died, I arranged for his ashes to be released into the ocean at his request given he had worked on tankers as a young man and always felt connected to the sea. In order to arrange this, I needed to find someone to assist, so my first point of contact was MTS Brisbane.

I then moved from the Parish of Lowood to the Parish of Goodna in 2000 when I started actively promoting the work of MTS and began knitting beanies for seafarers myself. The beanies are made with love by all those involved, so for us it is very much about warming both heads and hearts.

In St Luke’s, Collingwood Park there is a basket inside the church where people can donate beanies and throw rugs, as well as toiletries. I collect these periodically and take them into MTS. Meeting the seafarers and volunteers on these visits and seeing the MTS set-up with the books, pool table, outdoor area, coffee and tea station, chapel, and computers and phones for contacting loved ones, as well as the hand-knitted beanies which they can access for free, prompted me to get more involved. 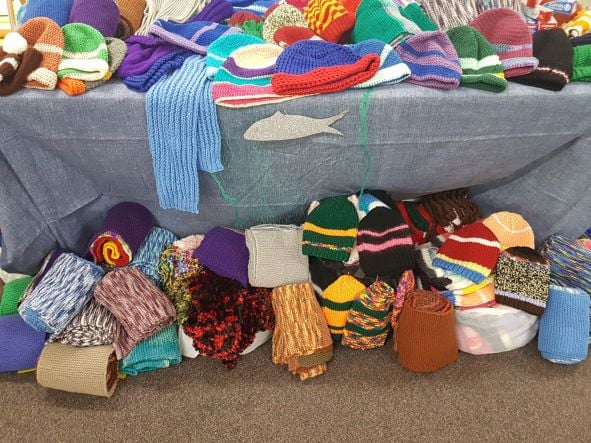 “Meeting the seafarers and volunteers on these visits and seeing the MTS set-up with the books, pool table, outdoor area, coffee and tea station, chapel, and computers and phones for contacting loved ones, as well as the hand-knitted beanies which they can access for free, prompted me to get more involved” (Eve Pengilley from the Parish of Goodna)

Recently, The Rev’d Dr Gemma Dashwood, our parish’s Honorary Deacon, worked with our parish and Mothers Union at the Parishes of Ipswich, Boonah Harrisville and Kingaroy to source beanie, scarf and toiletry donations. Simultaneously, Andy Brodersen from our parish sourced additional donations from the local Lions Club.

Through the work of all involved in this informal alliance between MTS, various parishes, Mothers Union and the Lions Club, over 460 beanies, 59 scarves, a throw rug, toiletries and other personal items were donated for seafarers who are confined to their ships due to COVID-19. The items are put into care packages by MTS Volunteer Coordinator Heather Turner and her team before being hoisted on to the ships via a small motor boat.

These comforts are even more important during the pandemic because seafarers are at sea much longer than usual due to being unable to disembark as they normally would when arriving into ports.

“No shipping, no shopping” has become a mantra of mine since COVID-19 started. Without our seafarers continuing to work on cargo vessels and tankers, we would not have petrol, air conditioners, cars, fridges, clothing, shoes, mattresses and so on.

I encourage all people across our Diocesan community to help MTS Brisbane in whatever way they can, including by partnering with other parishes, Anglican ministries and community groups to support this vital mission.

Editor’s note: If you are interested in donating to the seafarers ‘care package’ initiative, please email tfa@mtsbrisbane.org.au or message MTS Brisbane on Facebook.