There was a festival atmosphere as the bishops and their spouses gathered in Canterbury Cathedral for the closing eucharist of the Lambeth Conference on Sunday. Cassocks rather than choir dress were the order of the day, and there was no formal procession: people sat where they chose, and the place was rocking at least half an hour before the 4 p.m. start.

That half-hour set the tone: the big worship-band sound yielded at one point to Celtic influence, as a single, muted electric violin resonated in the cathedral’s acoustics. The video of the service captures just the end of this, with singing in Filipino.

The opening hymn, “Christ is made the sure foundation”, had been chosen weeks ago in all likelihood, when the unity of the Communion was something hoped for but not assured. The line “binding all the Church in one” was now sung with what appeared to be relief and jubilation.

Fitting, too, were the words of the reply to the opening “charge”: “Who are you and whom do you seek?” The answer: “We are servants of Jesus Christ, and we come seeking the grace of God, to travel on in his service together.”

In the Gloria, the congregation caught on to the rhythms of the repeated “Alleluia, Amen”. A solo trumpet soared above the voices.

The cathedral choir had greater prominence than in the opening service of the Conference, singing the Kyries and Sanctus in a setting by Josef Rheinberger, and, in place of a read epistle, Samuel Sebastian Wesley’s famous Eastertide anthem from 1 Peter 1, “Blessed be the God and Father of our Lord Jesus Christ”. 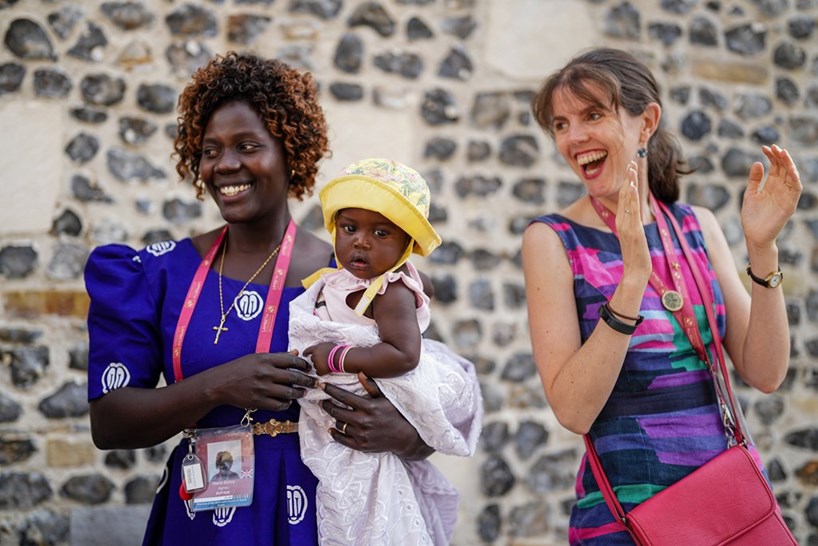 When the Archbishop of Canterbury was virged to the pulpit for his sermon, a trick of the light meant that the virger with the virge resembled a protective angel with a flaming sword. This impression reinforced the Archbishop’s theme: courage in the face of fear.

He began by warning against clinging to the familiar: “Our assumptions, our possessions, become a comfort blanket which ultimately smothers us. For they forbid us to engage with each other and with Christ. We make our worlds and our ambitions smaller because it feels safer, and they come to define and to constrain us.

“So the institutions, the power, the status, positions that we hold on to out of fear — personal fear for ourselves, fear for the future of the Church — end up fulfilling our fears.”

Meanwhile, there were real reasons to fear. “There are people here who will know the uncertainty of food supplies, the precarious nature of poverty, the insecurity of life in places of conflict and flux and natural disaster. People around the world live with the reality of these fears every day. For so many, it is very real indeed.”

There was, however, God’s command: “Do not fear.”

“We are continually being invited to begin a journey from fear to faith,” the Archbishop said. And when we slip from faith to fear, then Christ comes to us as he did to the fearful disciples in the upper room. He appears to us and says: ‘Do not fear.’”

During the sermon, Archbishop Welby related how he had discovered in 2016 that his biological father was not the man whom he thought of as his father (News, 8 April 2016). He described how news of his illegitimacy was received in the corridors of Church House, Westminster. 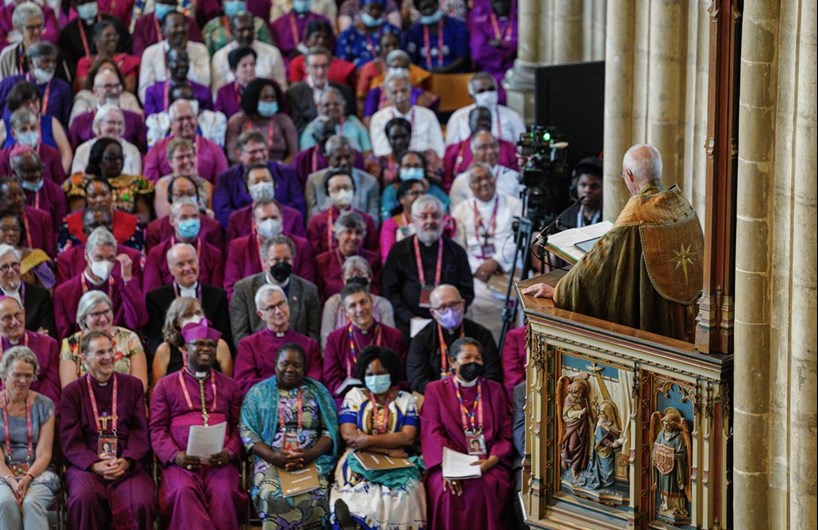 “I am told it was the only point at [which] the head legal adviser of the Church of England at that time was seen to run. The secretary-general had said to him: ‘The Archbishop’s just rung up to say he’s illegitimate,’ and he said: ‘That’s no problem — we changed the canon that said you could not be a bishop if you were illegitimate some years ago. At least, I’m sure we changed the canon. Excuse me, I’m going to check!’

The lesson that the Archbishop drew was that his identity was known to God at a far deeper level than any DNA test.

Having addressed the bishops directly in three keynote addresses during the Lambeth Conference, the Archbishop spoke more generally during his sermon. None the less, it was clear that he was talking about the central purpose of the gathering when he said: “We have met, over the past weeks and days, with people from all the corners of the globe, from contexts and experiences that are totally alien to us. And in these meetings we have found the antidote to fear. We find in John: perfect love casts out fear.”

And taking up the theme of his final address, that Christianity was a revolutionary movement, he praised the courage of bishops and their spouses, clergy and laity, who made the Good News known to those who lived in fear; who met to worship after bomb attacks; who walked across mountains to baptise and confirm; who protested against civil-rights abuses, gerrymandering, and “the shooting of unarmed people of colour in a routine traffic stop”.

As God’s people grew in love, their fear shrank, and the Kingdom of God found space and its rule in their hearts and lives, he said. “As you, as I, go home,” he concluded, “do not fear. Take heart, take courage — because it is the Father’s good pleasure to give you his kingdom.”

As in the opening service, the Lord’s Prayer was recited in every language of the 165 countries represented.

The global presence was expanded by the offertory hymn, Athelstan Riley’s “Ye watchers and ye holy ones”. And the music during the distribution reflected the Anglican Communion’s international character, with texts in Spanish, Arabic, and Xhosa.

After the communion, Archbishop Welby paid tribute to the cathedral’s Precentor, Canon Max Kramer, whose last service this was before his departure for Keble College, Oxford. The Archbishop reeled off some of Canon Kramer’s achievements since 2017, not least the opening and closing Lambeth Conference services.

If anyone was in any doubt about whether the Communion could still walk together, the Archbishop of Cape Town, Dr Thabo Makgoba — after he had thanked Archbishop Welby and his wife, Caroline, for their ministry to the bishops and spouses during the Conference — invited the congregation “to walk together, singing and rejoicing, out of this holy and ancient cathedral as a sign of our calling into the world that Jesus Christ came to save”. They not only walked: captivated by a jaunty Zulu song, they danced.