Thousands of poppies are being handmade in the lead up to a St Mary’s Anglican Church, Kangaroo Point Remembrance Day service to mark the Centenary of the First World War Armistice, and particularly honouring the Royal Australian Navy.

Naval Association of Australia (Sandgate Sub-Section) member and poppy-making coordinator Kaye Ross said that thousands of poppies were being created across South-East Queensland for the historical event.

“Poppies are being made by locals from many different community groups and areas, including nursing home residents, the St Mary’s congregation, the Kangaroo Point and Districts Historical Society and local library craft groups,” Ms Ross said.

The Flanders Poppy has long been a part of Remembrance Day commemorations and the history of the First World War when red poppies were among the first plants to spring up in the devastated battlefields of northern France and Belgium.

The Flanders Poppy’s vivid red colour has also come to symbolise the sacrifice of shed blood, and is immortalised in John McCrae’s 1915 poem, In Flanders Fields.

Official figures state that from a population of fewer than five million Australians, 416,809 men enlisted, with more than 60,000 killed and 156,000 wounded, gassed or taken prisoner; and these figures do not take into account the blood shed by other Allied troops, German soldiers or civilians. 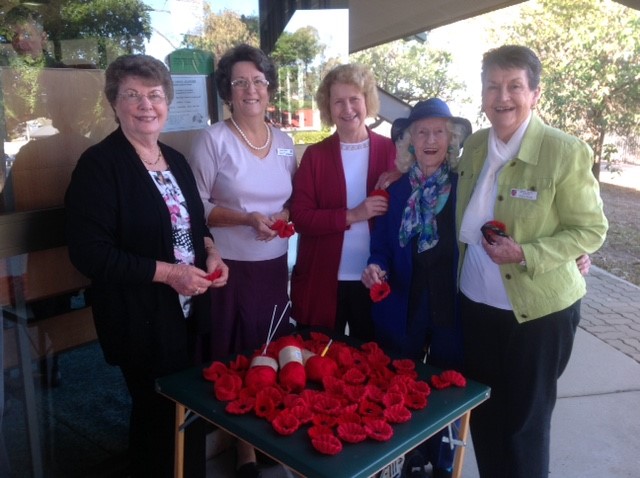 Priest-in-charge of St Mary’s Anglican Church The Rev’d Canon Gary Harch said that St Mary’s has strong historical ties to the Royal Australian Navy and encourages all community members to get involved.

“St Mary’s was the chapel to the Queensland Naval Brigade from 1873 onwards and we were here when the Royal Australian Navy itself commenced in 1911,” Canon Harch said.

“We have a proud connection of supporting the Navy, and will be honouring its vital role in bringing about the end of hostilities in World War I, with a special focus on its submariners.

“Many people, including those not in the church, have seen this event as something they want to participate in.”

St Mary’s has received over $5,500 in funding by the Department of Veterans’ Affairs to host the event.

St Mary’s will conduct its usual Sunday services on Remembrance Day, with a commemorative service of thanksgiving and placement of poppies in the wall of poppies at 12.30pm, concerts in the afternoon, and the turning on of two large illuminated poppies overlooking the Brisbane River and Kangaroo Point Cliffs Park from 6pm.