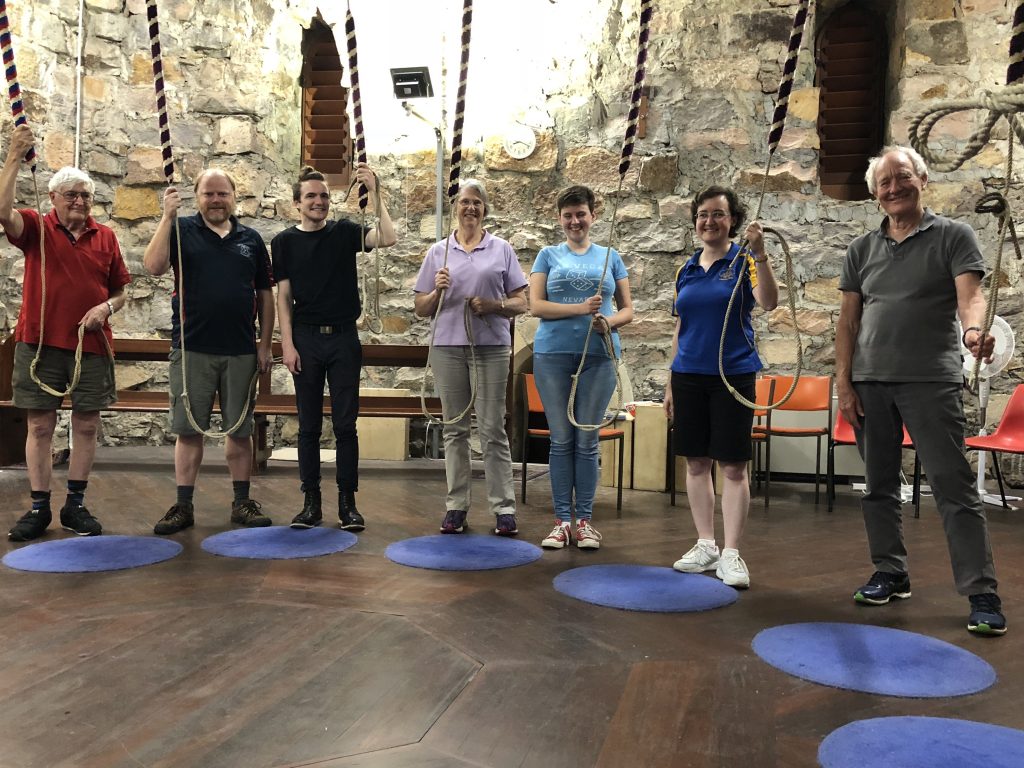 Wanted: People with rhythm and some knack for patterns to pull on ropes. No experience necessary. Basic musical ability is an asset. Remuneration is modest, but training is free!!

If this sounds like you, then St John’s Cathedral has a job for you – joining its ranks of bell ringers who peal the 12 bells from the tower high above Ann Street in Brisbane.

The Cathedral is on the hunt for up to five new bell ringers after the departure of several colleagues for different reasons. The ringers are on duty in the bell tower every Sunday morning and for weddings and other special services throughout the year, pulling on the bell ropes with a well-honed synchronicity.

Tower captain Dr Ian McCulloch is a third generation bell ringer who started playing when he was 15. It has been a lifelong passion for the University of Queensland quantum mechanics lecturer and researcher who had a ‘hobby highlight’ in 2015 when he travelled to London and rang the bells at Westminster Abbey for the 100th Anzac Day anniversary celebrations.

“You meet people from all walks of life in this hobby, which can be quite physical especially with some of the bells here at St John’s weighing up to 835kg,” Dr McCulloch said.

“We’re looking for four or five bell ringers. If they have played before, that would be fantastic (I play the trombone), but no prior bell ringing experience is necessary.

“The bell is a musical instrument – a percussion instrument – and while some music knowledge and ability are helpful, it’s not a pre-requisite to become a bell ringer. You need a good sense of rhythm and it helps if you’re good at patterns, as a lot of the playing involves learning and performing to a pattern and as part of a team of up to eight or 10 bell ringers.”

Channel Nine News, Brisbane featured a story on the bell ringers on Sunday 21 October and the story ‘resonated’ with over 250,000 viewers who watched the story. Dr McCulloch is hopeful his phone will start ringing soon from wannabe bell ringers!

Lisa Doyle embarked on the holiday of a lifetime last year, leaving Dublin and travelling to Australia via New Zealand. By her admission she’s not greatly proficient with musical instruments, but became a bell ringer back home after seeing a news story when she was 24 about the local church which was looking for recruits.

She joined the St John’s Cathedral troupe in May this year not long after arriving in Brisbane and has quickly become a valued team member.

“I just thought it would be fun and a cool thing to do especially as part of a group. I’ve made new friends here in Brisbane and the bells here at St John’s are amazing. I’m told they’re among some of the best in the world,” Ms Doyle said.

Also part of the St John’s bell ringing troupe is 80-year-old Mike Toze, who started ringing bells in Dorset when he was just 11 years old.

St John’s Cathedral is home to 12 bells, housed in the central tower for traditional English-style change ringing. The bells, which weigh between 245kg and 835kg, are rung for services every Sunday and on special occasions such as weddings. St John’s is only one of two towers in Brisbane to have bells arranged for change ringing, and only one of three in Queensland.

The bells have a long and interesting history, having first been purchased by public subscription back in 1876 by the oldest bell founder in the world, the Whitechapel Company.

On Sunday 11 November, the Cathedral bell ringers will join with colleagues at cathedrals and churches around the world as part of the Ringing Remembers campaign for Armistice Day – 100 years after the end of World War 1.

The event will also serve as an act of remembrance of the 1,400 bell ringers who died in WWI.

The bells toll for new ringers at St John’s Cathedral