The recent National Apology to victims and survivors of institutional child sexual abuse by Prime Minister Scott Morrison in Parliament House, Canberra was attended by over 800 survivors and family members from around Australia. More than 100 Queenslanders travelled to Canberra to participate in the historic event, including an Anglican Church parishioner, a mother, whose son was sexually abused in the Scouts. She shares her story with some advice for those unsure about what to say to those who have been affected by child sexual abuse.

**SUSAN** was conflicted about whether to make the journey to Canberra for the 22 October National Apology, despite being granted a seat at the event from the national ballot, which was conducted to decide which survivors and their relatives would be invited to attend.

While it had been many years since her son was sexually abused when he was in the Scouts, she still bears the emotional and psychological scars and trauma of decades of contending with the aftermath of the abuse – anxiety, panic attacks, a deep mistrust towards institutions and a family with fractured and fragile relationships.

But as a parishioner at an Anglican Church within the Diocese of Brisbane, Susan’s faith has underpinned her resilience and has been a constant source of strength and solace for her.

She weighed up the risk-reward equation of attending the National Apology, knowing it would be very emotional and stressful, while feeling uncertain about how she was going to react when she was immersed in such an environment.

“But I decided to go to Canberra because I thought it would be helpful to see and hear the apology first hand along with ‘my tribe’ – to be with others who had been on a similar journey to me,” Susan said.

“Many survivors thought they were the only ones who were abused and discovered that they were not. We have created our own support community among people who have common experiences and emotions and we draw strength from each other as we all try to move forward individually and collectively to a better space.

“On the flight from Brisbane, the day before the National Apology, half of the aircraft was filled with survivors, family members or support people and when we arrived at our Canberra hotel on Sunday afternoon, there would have been 200 people there for the National Apology, all staying at the same hotel.

“You could sense the high emotion before the event and on the day as we filed into the gallery of the House of Representatives and/or the Great Hall in Parliament, where the main event was held (Prime Minister Scott Morrison offered the formal National Apology on the floor of Parliament and spoke again later in the Great Hall, with Opposition Leader Bill Shorten also speaking in both venues).

It was historic and it was important and meaningful for many survivors and families – and for me.

“The day was a roller coaster of emotion for everyone. At some stages, people stood and clapped; other times they wailed, cried and screamed out loudly about their experiences and were just angry.

“But it was historic and it was important and meaningful for many survivors and families – and for me. A survivor who was with me for the event said: ‘That’s the first time anyone has ever said sorry to me.’

“Before it, some wondered whether it was all just a political stunt. But, after the speeches by Mr Morrison and Mr Shorten, many of us looked at each other and there was a general feeling of ‘Yeah, it was okay, they said the right things and I think they got it.’

“I felt we were treated with respect and care. There was empathy and the media who attended the Great Hall event were respectful and not intrusive.”

For Susan, it’s the things that might seem insignificant to others that have had deeply traumatic emotional significance over the years for the mother of a son who was sexually abused when he was a young boy in the Scouts.

The sight of the Scout uniform is a trigger for Susan. “It’s like a Tyrannosaurus Rex rises inside her,” she says. “But strangely, it’s also hearing the old children’s song We’re Going on a Bear Hunt – a song the Scout master would apparently sing to those children in his care when playing games.”

“Certain memories trigger emotions and memories for me. I think of the innocent child my boy was before he was abused and it’s distressing when I know how much it has damaged him and us and our lives,” said Susan.

“The triggers are quite an individual thing, although for many it is the uniforms and symbols associated with the institution. You never know when and where the triggers are going to come from and how you’re going to cope with them on a certain day, although it’s important to have coping strategies which can be learned in counselling, such as removing yourself from a situation, by breathing or grounding yourself with your feet on the floor.

“I understand that a lot of people are still uncomfortable in speaking with survivors or their family members who were impacted by it. It’s hard for them to deal with – the horror of it – and they want to recoil from confronting situations and pretend it didn’t happen.

I’m very mistrustful of institutions. I don’t know if I could have walked back into a church if the abuser was a member of the clergy.

“It is such an emotional roller coaster. I have been very angry – many, many times over the years. In fact it felt like a murderous rage at times.

“How do you deal with that? What do you do with those emotions? My son who was abused doesn’t really speak about his trauma.

“I’m very mistrustful of institutions. I don’t know if I could have walked back into a church if the abuser was a member of the clergy.

“I was able to move past the anger by taking the view, ‘This has happened, I can’t change the past but I want to change the future and ensure that all of our children are safer.’

“With the Royal Commission, it was a difficult decision for most people to go and testify because you knew it was probably going to re-traumatise you. But overall it was a positive experience to be listened to with respect and to be believed by the commissioners and their staff, especially for those who had disclosed abuse to institutions in the past and not been believed.

“But many of us were motivated by a burning sense of responsibility to ensure that changes needed to occur, so that children in the future would be believed and protected and also to ensure that controls were placed on institutions whose natural tendency is to self-protect at the expense of natural justice. So the National Apology was not an ending for us – it is just another chapter in a fight for justice for children. “

But Susan says she is pleased with the way the Brisbane Diocese and especially Archbishop Phillip Aspinall have dealt with the issue and the implementation of recommendations of the Royal Commission and says church services to acknowledge survivors and those who have lost their lives have been a real step forward.

Susan says she is also sensitive to, and empathetic with, members of the clergy and the pain they have experienced with the betrayal of trust in the church.

She says some people in her parish are aware of her family’s story and while they are sensitive in their response and empathy, many people still don’t know what to say or how to respond to Susan’s trauma. Different people have different and individual triggers and react to situations and comments in different ways, which she appreciates can sometimes have other parishioners and friends feeling as if they’re “walking on egg shells”.

“I know some people are fearful of saying the wrong thing, but if people are just prepared to listen and hear you – that can make a big difference,” said Susan.

“Just to hear people say: ‘I’m really sorry this happened to you’ is important. For people to say: ‘If you want to talk at any time, I’m here for you.’ That really helps.”

“By the same token, don’t expect all of us to be able to forgive the perpetrator or the institution. That takes a long time to work through and we need to do that in our own time and when we have control because we didn’t have control when our kids were abused.”

Gary Foster founded the Living Well program, which has been providing counselling and support services for 10 years for people who have been sexually abused (and their families) and has assisted thousands of people who have been impacted. He travelled to Canberra as a support person for several people, including Susan.

“The National Apology was an important day. Having said this, in going to Canberra many of us were apprehensive and uncertain what to expect, in terms of what would be said and what our emotional reaction might be,” Gary said.

“The day at Parliament House had been carefully planned and the invited survivors I spoke with felt that it was a genuine apology for failing to protect and properly care for them.

“An abiding message from the survivors present on the day was that any words of apology, must be followed up by tangible steps to ensure children are safe and people are properly supported to address the ongoing impacts on their lives and relationships. 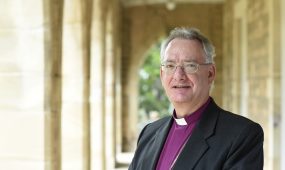 Statement by Archbishop Phillip Aspinall ahead of PM’s national apology

“Unless, these words are backed up with actions, the apology will be seen as hollow and meaningless. Part of the hope for an improved future was that people would be better informed about how to respond to allegations of sexual abuse and survivors’ distress and disclosures.

“Following the Royal Commission there is an expectation that members of the community and in particular those connected to the Anglican Church, should have an awareness of child sexual abuse and have taken time to think through and learn how best to respond to someone with compassion and care.”

**Susan’s name has been changed to respect her privacy**

Some Living Well advice on how to assist someone who has been sexually abused, or a family member of an abuse survivor:

Become informed about how to respond to someone who has experienced child sexual abuse or sexual assault.

Respect their trust in you.

Understand some of the pressures and difficulties they may face.

Encourage them to access support. Be prepared to act to ensure someone is safe.

Check in with them and enquire how you can be the best friend/support person for them.