Four years to the day after a thumping, catastrophic storm ripped through Brisbane, Dean of St John’s Cathedral The Very Rev’d Dr Peter Catt and Precinct Manager Gerard Finn can be forgiven for looking anxiously to the skies any time dark and ominous clouds loom over the city skyline this summer.

On 27 November 2014, the ferocious hailstorm caused chaos and carnage to the Cathedral and church precinct – as well as to large parts of Brisbane in what was the worst natural disaster to befall the city since the 2011 floods.

Fast forward four years and the Cathedral is finally having the last repair work done, in what has been a mammoth test of patience, skill, resources, relationship management and good old-fashioned hard work.

Dr Catt said that he and Mr Finn watched in shock and awe from their office as hail stones the size of oranges smashed into the entire precinct and torrential rain poured into the Cathedral and other buildings – gutters and building spitters clogging with ice, leaving the water no other escape route.

“I stood in my office watching the massive, jagged hail stones pounding the building and the Bishops’ cars. The hailstones shattered into smaller projectiles, each doing more damage,” Dr Catt said.

“The cars were deeply dented and the windows of the Cathedral were smashed. Huge volumes of water accompanied the hail stones. The building was awash inside, as the hail stones had clogged the gutters and the water just flooded in.

“Water was pouring through the stone vaulting and flowing out of the pipe organ inside the Cathedral. I noticed that a few of the stained glass windows had sustained damage and I was grateful that somehow there had not been more damage to the windows.

“The poor pipe organ received a fair bit of water damage, which affected its reliability and it limited its dynamic range for a long while there until it was fully repaired.”

On that fateful afternoon, it was all hands to the pumps, rubbish bins and wheelie bins as water was captured from leaking rooves and scooped up from flooded floors by every staff member available in the Cathedral, St Martin’s House and Webber House.

The damage to all of the precinct buildings was extraordinary – especially the 130-year-old church. Across the Anglican Diocese of Brisbane, 38 buildings were damaged, with many Anglican Church Southern Queensland cars receiving hail damage and broken windows.

In the Cathedral, roof tiles were destroyed as were 100 individual leadlights, along with damage to the copper sheeting on the front spires and the southern and eastern sides of the bell tower. 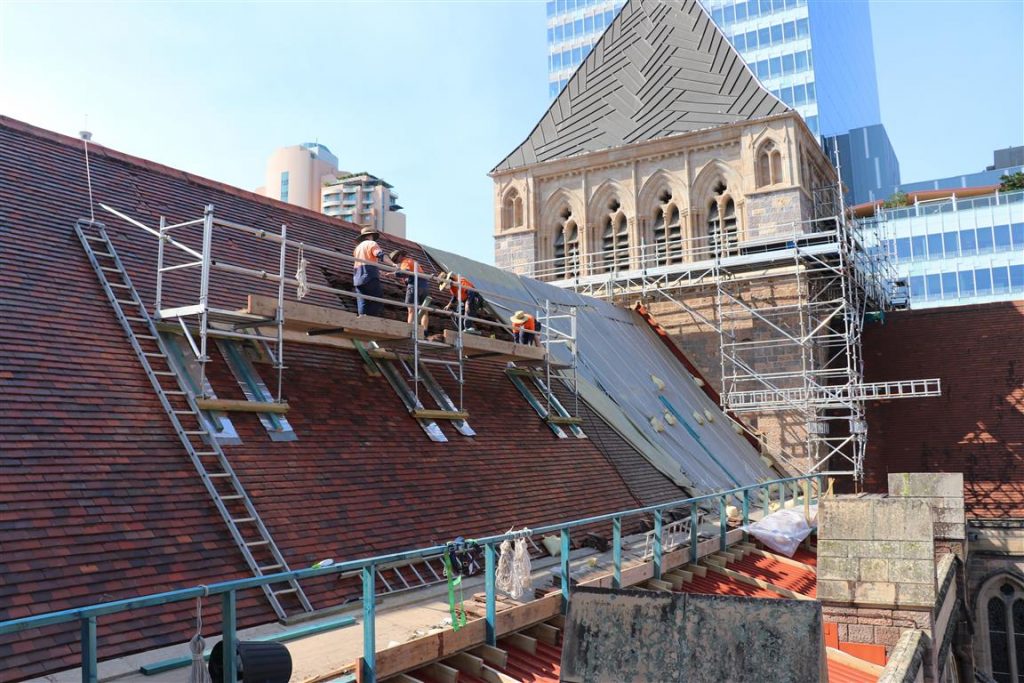 Restoration repairs commenced in early June 2015 with a methodology plan agreed to and materials sourced. The problems were multiple and complex, with replacement material difficult to source.

More than 100 individual leadlight window sections were damaged in the storm event, all of which were repaired individually by hand. Insurance covered all of the damage, with the repair bill in the end topping $7.5 million.

NPS Managing Director, Mark Paterson sourced approximately 37,500 tiles from France for St John’s Cathedral and 22,000 tiles were sourced from Belgium for St Martin’s House and Church House (using 80,000 copper nails which all had to be hand-nailed).

The massive scope of repair works had to be done in stages, with the Cathedral, which had only been finally completed in 2009, taking priority in the precinct.

It took all of Mr Finn’s decades of organisational and project management skills to coordinate and oversee the team of around 50 tradespeople who occupied the site at varying levels, for the best part of the following four years.

Mr Finn worked seven days a week for almost three years, juggling the project management role with his ‘day job’ of managing everyday precinct and Cathedral matters, including managing the momentum and logistics of the Cathedral’s weekly schedule of services, weddings and other functions.

Dr Catt said Mr Finn showed extraordinary dedication and commitment to the project and the heritage values of the church.

“Gerard was an excellent project manager and has a broad skill set with a great passion for the integrity, history and sacred status of the Cathedral,” he said.

“He has deep respect and appreciation for the building per se, as well as what it represents and he has been fiercely determined to safeguard it especially through that challenging repair period where we had to closely supervise vast numbers of tradespeople.”

The final piece of repair work has been signed off by the insurers and final restoration to the ceiling vestals will soon be done, marking the end of an extraordinary and challenging period in the history of the Cathedral.

Mr Finn regards his role as manager and ‘custodian’ of its heritage as a privilege.

“It was a massive challenge to keep the Cathedral and the entire precinct fully operational for the last four years, especially in the first 18 months after the storm when we had cranes, scaffolding and workers everywhere,” Mr Finn said.

“We had tarpaulins on the Cathedral roof for 18 months, but it was still business as usual for church services although the number of weddings was diminished, as many couples weren’t keen to have a church covered by tarps as the backdrop for the photos of their special day. 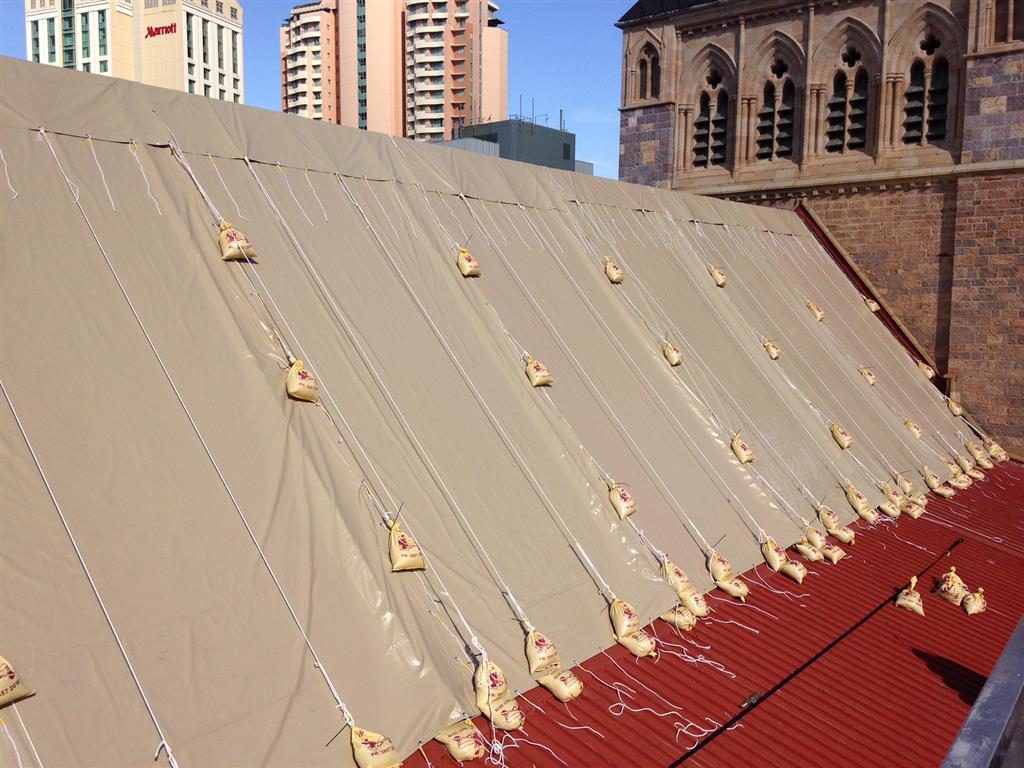 “It’s only in the past year when we’ve started to get the wedding business back to pre-storm numbers.

“It’s satisfying and rewarding to see the Cathedral back to its full glory – although now that we’ve entered summer and storm season again, the Dean and I get a bit nervous on those days when you can feel a storm building and you receive the text warnings from the Bureau of Meteorology.

“People don’t realise how busy the Cathedral is on a daily and weekly basis – and not only as a place of worship. We have to promote and get the word out there that it’s also available as a venue for events, functions and performances to keep paying the maintenance and compliance bills and upkeep.

“Aside from organ recitals and our annual Loaves and Fishes event, it is a multi-purpose creative space and has been used for everything from a Missy Higgins concert to the Mercedes Benz Fashion festival this year.” 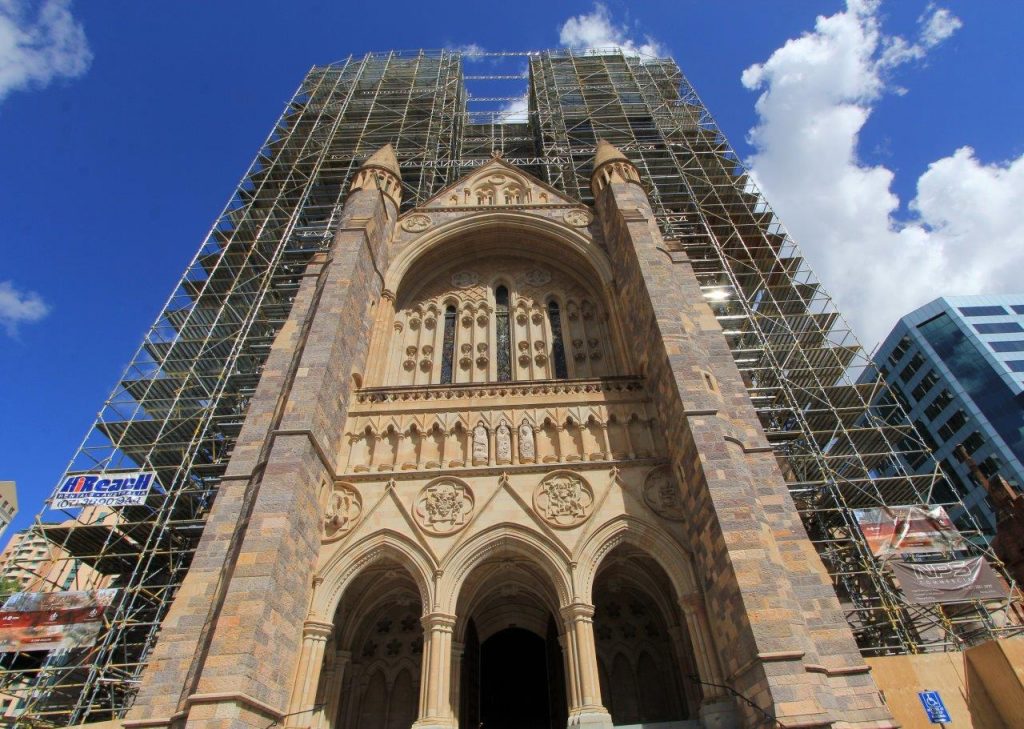 Scaffolding during the Cathedral repairs 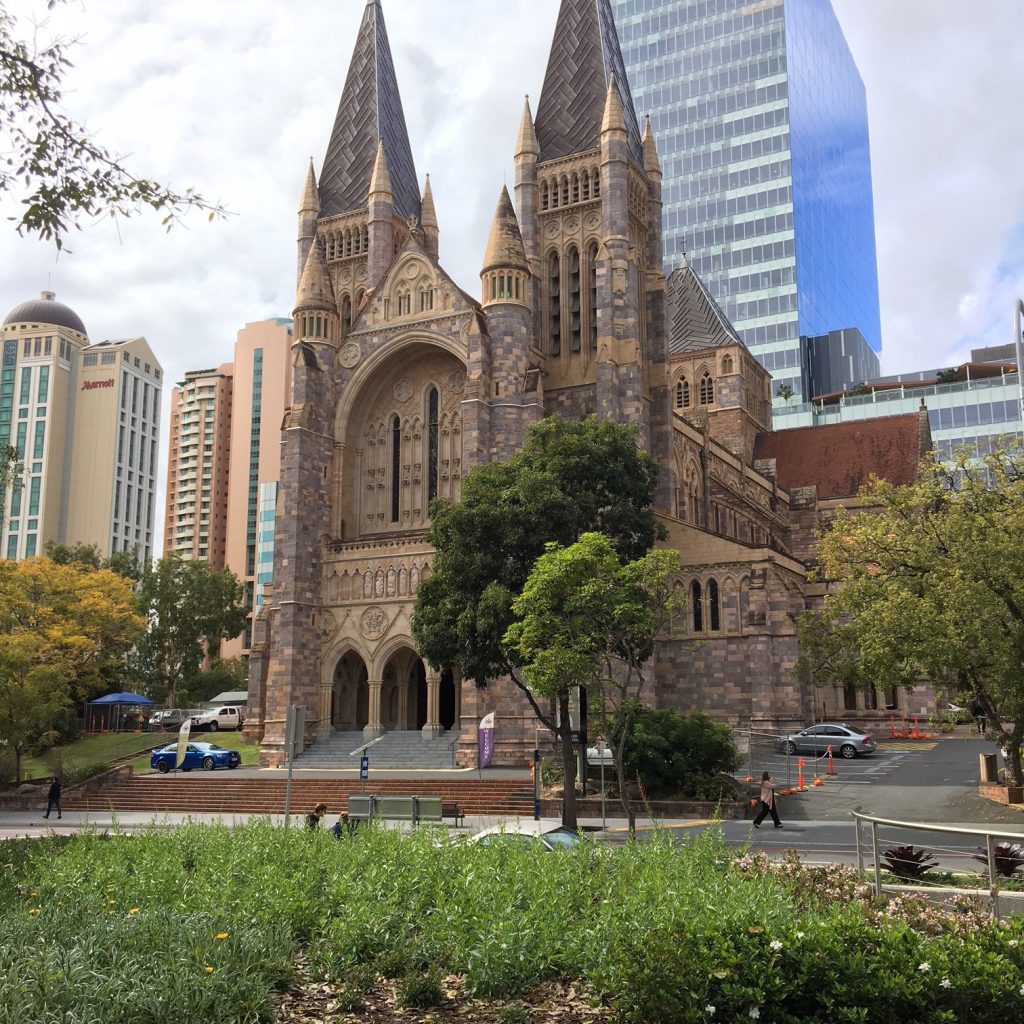 The restored Cathedral fours years after the November 2014 storm hit