Whether at the end of an Easter egg hunt or a Lenten fast, for many Australians, Easter has become synonymous with a delicious chocolate binge.

But, before you are tempted by the sparkling array of eggs, rabbits and assorted chocolate treats, handily placed near the checkout of your local supermarket, pause for a moment to consider: how might we buy chocolate that not only tastes good, but does good for everybody?

World cocoa production has been a long-known source of human trafficking and child labour. As the main ingredient in chocolate, this cocoa has long been used in some of our most loved and well-known chocolate.

What a sobering thought.

That the joy of an annual Easter egg hunt on the faces of our own children, might be bought, literally, at the expense of other children, forced to labour in dangerous and sometimes slave-like working conditions on the other side of the world.

According to the Cocoa Barometer, in 2018 there were over 2.2 million child labourers in West Africa alone. To put that in perspective, that is roughly the same as the entire population of children in Australia aged between six and 18.

And, in recent years great inroads have been made both with farmer and manufacturers to try and tackle this terrible scourge of trafficking and child labour.

Transparency of supply chains has been one key, working more collaboratively with famers to try and identify than ameliorate these conditions. By some reports, this approach appears to be paying greater dividends than simple compliance, which tended to force such practices underground, or cause them to be hidden for fear of loss of income.

This is because poverty is the greatest driver of human trafficking and child labour.

So, ultimately great responsibility still rests with the major chocolate producers (yes, all those brands we love), and with us, the chocolate loving consumers. Along with transparency of supply chains, manufacturers need to pay fair prices to farmers for their cocoa.

There are a range of anti-slavery groups internationally that have been running campaigns to clean up the chocolate trade. In Australia, Stop The Traffik, co-directed by Carolyn and Fuzz Kitto, has been instrumental. The Australian arm of Stop the Traffik was founded around 2013 (the Anglican Church of Southern Queensland was an early sign up and remains a member). Since then, working collaboratively with others in the sector and with industry, it has had much success in pressuring some of our biggest producers, including Nestle, Cadburys and Mars to make commitments to working towards a slave-free industry.

But there are also a few simple actions you can do this Easter to help!

This is the number one thing! Look for chocolate eggs and products that are certified. And tell your friends and family to buy good eggs too! It is as simple as looking for the certification logos, such as these: 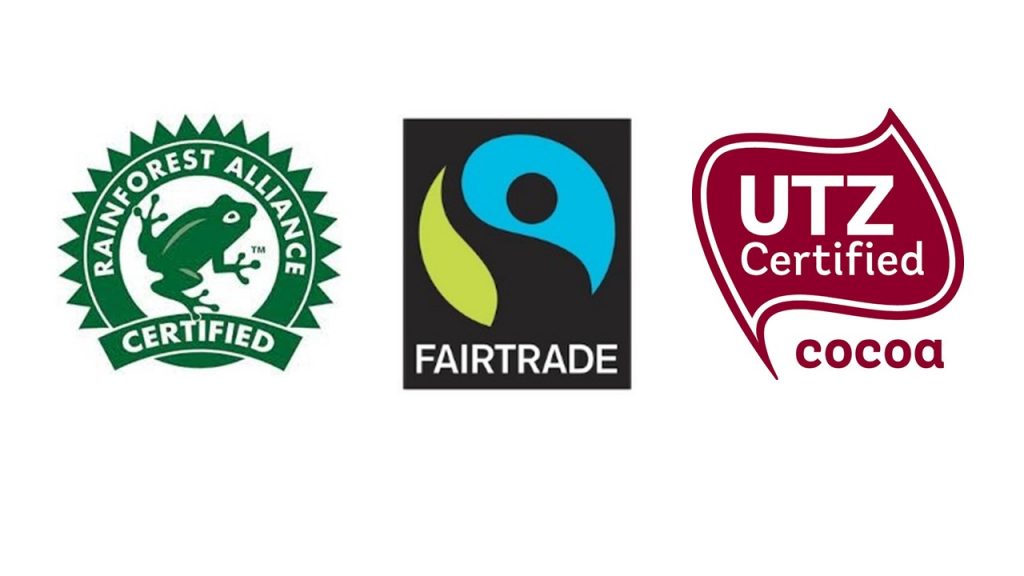 Thank your local shop if they stock good eggs, or tell them you are taking your business elsewhere if they don’t.

Send a postcard (or write an email, or send a message on social media) to a chocolate company. This is such a simple step, but it is incredibly powerful for companies to get this kind of personal, heartfelt feedback from their customers.

Postcards can be ordered off Stop the Traffik’s online shop or email the ACSQ’s Justice Unit and they can send you postcards to share with your church or community.