I am sometimes asked how and when I first became concerned about the safety of refugees and people seeking asylum. My answer always stems back to conversations I had with my folks when I was a teenager growing up in the 70s. My parents intentionally raised my siblings and me to respect the values of kindness and a fair go for all and would often point out when they observed systematic injustice. They would usually unpack the causes and implications, whether the injustice impacted people overseas or locally, including racism toward the Biripi people in Taree where I grew up. Of course, my parents were just as quick to point out when a given people or situation was treated in a fair, reasonable and kind manner.

Following the Vietnam War, my parents frequently commented on how impressed they were with Liberal Party Prime Minister Malcolm Fraser’s compassion, as he welcomed many Vietnamese people who fled to our country for safety. In the decade following the war, his choice to be compassionate led to more than 50,000 Vietnamese people rebuilding their lives in peace, freedom and safety here, where they have collectively made a remarkable contribution to our nation.

At a time when the racist ‘White Australia Policy’ legacy was still pervasive in many parts of our communities, Fraser’s decision was groundbreaking, brave, kind and effective. Later, he went on to courageously take a stand and openly challenge the asylum policies of future Coalition and Labor leaders. Fraser’s compassion, courage and commitment to a fair go for all show that principles can indeed transcend politics.

In October I spoke at a gathering of local people who are very worried about the more than 100 men who are being indefinitely held in Kangaroo Point Central Hotel, most of who were medevacked to Brisbane following nearly seven years of detainment on Manus or Nauru. Over 80 per cent of the men held in this so-called ‘alternative place of detention’ (or ‘APOD’) had their refugee status confirmed many years ago, which means that they have passed the necessary security and safety checks. 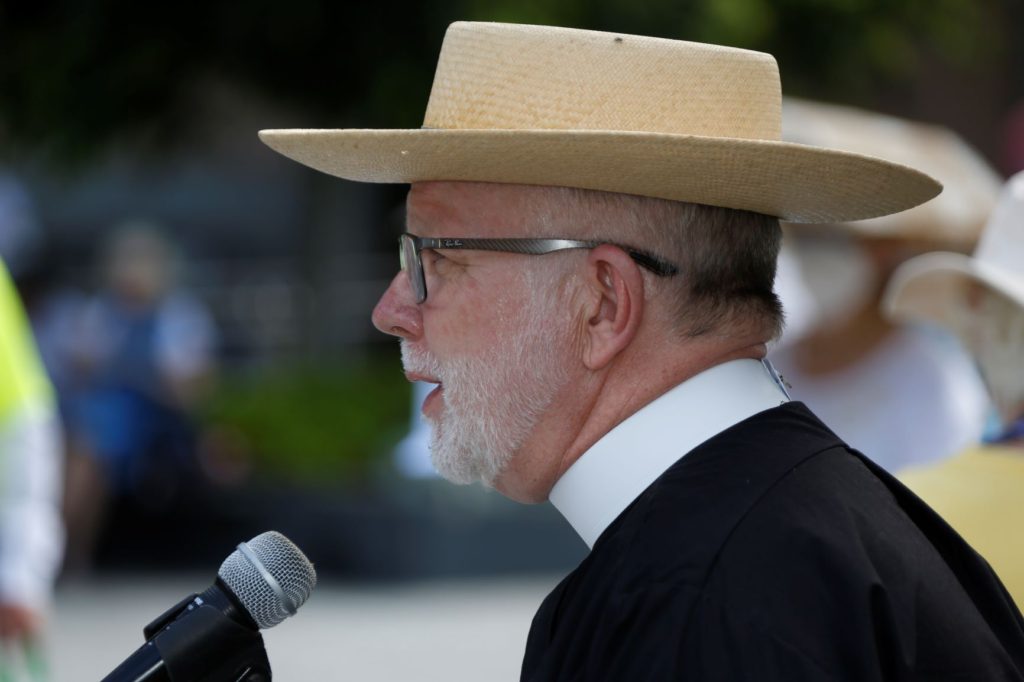 “In October I spoke at a gathering of local people who are very worried about the more than 100 men who are being indefinitely held in Kangaroo Point Central Hotel” (The Very Rev’d Dr Peter Catt, image courtesy of A. Bainbridge)

Within a fortnight of this gathering being held, a young father named Saif tried to hang himself in the hotel. Saif’s wife Sabbah, who has also been found to be a refugee, came to Brisbane from Nauru months after giving birth because their baby son Sammi needed medical treatment. Consequently, she and Sammi have been living locally in community detention for three years. Saif was not permitted to leave Nauru and accompany his wife and child here, hence they were geographically separated for several years.

Last year Saif was medevacked to Brisbane, where he was detained in the hotel APOD. Sabbah and Sammi have been living 20 minutes away from the hotel, but were forbidden from hugging their husband and father, despite Sabbah being unwell herself and needing a number of surgical procedures in the last year. After years of detention, this ongoing and completely unnecessary and cruel situation brought Saif to attempt suicide at 3.30 am one Saturday in late October. Since attempting to take his life, he has been held in the even more isolated Brisbane Immigration Transit Accommodation (BITA) facility.

Of all the current Federal Government policies impacting the safety and wellbeing of refugees, none is more abhorrent to me than that of arbitrarily detaining people indefinitely. The mental health effects of leaving people in this long-term limbo are well documented and include depression, severe anxiety, hopelessness, resignation syndrome and self-harm, as well as the huge toll on the loved ones of those detained.

I have heard stories of good Christian folk visiting their Federal Members of Parliament to express concern about the indefinite detention of refugees and asking their representatives to advocate for the release of people into our community, only to be turned away with, “In principle I agree with you, but there are no votes in it.”

This mind-boggling response reminds me of something that the late Malcolm Fraser once said when he criticised Federal Government leaders for using refugees as political footballs, instead calling for humane treatment:

“This is a demeaning debate, it’s a miserable one. It also shows that the politicians who participated in this debate have contempt for all of us, for the majority of the Australian people. They believe that despite all the evidence to the contrary, that if they appeal to the fearful and mean sides of our nature, they will win support.”

As Christians, we want our political leaders, many of who purport to be Christian, to treat refugees and people seeking asylum with compassion, kindness and fairness. As Christians we want to see people living in peace, freedom and safety with their families.

Thus, we want to see young families like husband and father Saif and wife and mother Sabbah and their toddler son Sammi thriving in our communities.

The only way that we can shift our political leaders is for more good folk to keep appealing to their elected representatives in order to show that there are indeed “votes in it” – to call upon their elected representatives to release those who are being indefinitely detained into our communities and/or to take up New Zealand’s’ long-standing offer.

At the October gathering of worried locals, I spoke about how heartened I was that 96 per cent of Australians asked Senator Jacqui Lambie to vote in the Senate for refugees in our detention centers be able to maintain access to their mobile phones. Phones are a lifeline for refugees who are held in detention, as they enable access to family members and loved ones, legal representation and health support.

In early September Senator Lambie surveyed our nation asking, ‘How do you think I should vote on the Mobile Phone Ban bill?’ The bill to ban phones failed to pass in the Senate solely because Senator Lambie, who had the deciding vote, chose to vote in favour of detained refugees keeping their mobiles – she did do because the overwhelming majority of Australians asked her to vote this way.

This example clearly shows what we can achieve together if each individual speaks up for what is right, fair, reasonable and compassionate.

Let’s start by advocating for Saif to be reunited with wife Sabbah and toddler son Sammi, so they can live in our local community together.

Here are four practical things we can each do to help make this happen: