A slice of Queensland entertainment history will be recreated in St John’s Cathedral next month with a performance tribute to the 60th anniversary of the first television drama ever produced in Brisbane.

A Sleep of Prisoners, the verse play by legendary English dramatist Christopher Fry, is being staged at St John’s Cathedral on the evening of Thursday 4 March.

This is almost 60 years to the day after the same play was filmed live by ABC Television in St John’s, becoming the first small-screen drama made and broadcast in Brisbane.

The 1961 production ran for 75 minutes and featured a cast of four, headed by leading Australian actor Ron Haddrick.

Brisbane TV drama writer and historian Stephen Vagg approached St John’s Cathedral and the Queensland Shakespeare Ensemble (QSE) last year with the idea of staging a one-night only revival of the play to commemorate the anniversary of the original broadcast.

“Television drama production in Australia is traditionally associated with the cities of Sydney and Melbourne,” Mr Vagg said.

“Yet Brisbane has its own rich history of making TV drama – from recent efforts such as Harrow and Secrets and Lies, back to the 1980s revival of Mission Impossible and the 1960s live plays from the ABC at Toowong.

“Before any of this, there was A Sleep of Prisoners, broadcast from St John’s Cathedral on 2 March 1961, only a few years after television was introduced to Australia.

“It is thrilling that St John’s and the Queensland Shakespeare Ensemble agreed to put on this performance in the exact same location it was first recorded here.”

Mr Vagg, a former story producer for Neighbours and Home and Away, said the play’s original author, Christopher Fry, was a towering figure of English post-war entertainment, including working on the screenplay of the legendary 1959 Hollywood movie epic Ben Hur.

A Sleep of Prisoners, Fry’s lyrical reflection on life, death, violence and purgatory was originally commissioned as part of the Festival of Britain, and opened at St Thomas’ Church in Regent Street, London in May 1951.

The play is set in a bombed-out church during WWII and focuses on four soldiers and their dreams of Biblical stories.

Mr Vagg said the play was originally selected for filming by the ABC in part because it could be performed in a church.

“However, one of the ABC’s leading TV directors, Ray Menmuir, had worked here and knew St John’s Cathedral would make an ideal filming location for A Sleep of Prisoners.”

Dean of St John’s Cathedral The Very Rev’d Dr Peter Catt said they were delighted to revive the play (with a local cast) in the Cathedral, which has proved to be a popular and versatile venue for the performing arts over the years.

“Aside from being used for services and musical performances, we have staged various theatrical performances over the years – including one by the Queensland Shakespeare Ensemble – as well as a few fashion shows,” Dr Catt said. 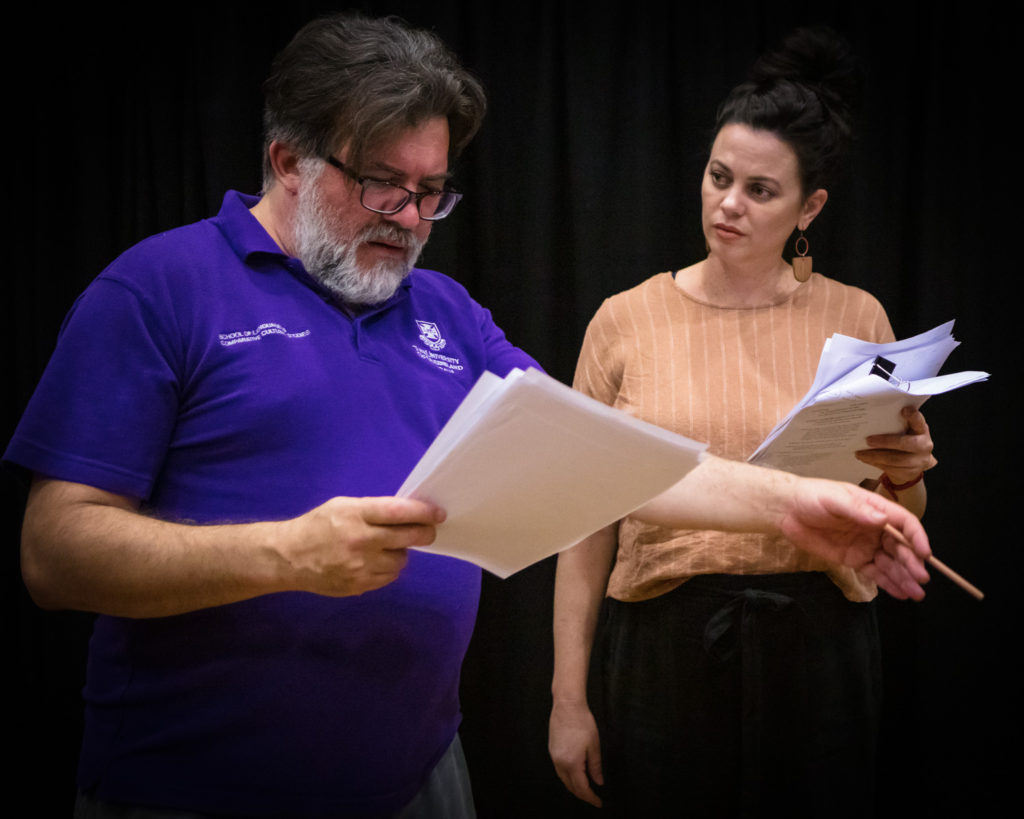 The 2021 performance of A Sleep of Prisoners will be directed by Rob Pensalfini, one of Queensland Shakespeare Ensemble’s founders and its artistic director since 2001.

He said QSE had a long track record of performing both verse drama and contemporary local stories.

“Over the years, we have worked extensively with prisoners, returned military personnel with PTSD, and wartime stories,” Dr Pensalfini said.

“Our mission at QSE is to bring classical stories to life for a contemporary local audience and in particular through the lens of the marginalised, which is exactly what Fry did with A Sleep of Prisoners, juxtaposing key Biblical texts with modern characters in extremis.

“The key components of this play – dramatic verse, liminal and subliminal states, deprivation, and moral complexity – resonate strongly with the themes which QSE explores in its work both on stage and in our communities.

“The important place of this text in Australian performance history, which led to one of the first televised Australian-produced dramas, demonstrates the importance of classical stories and verse drama to the development of new and vibrant forms of performance.”

In a symbolic reaching of hands across the nation, A Sleep of Prisoners will be concurrently performed on 4 March at St George’s Cathedral in Perth – which similarly broadcast its own version of the same play just a few weeks before Brisbane in 1961.

Tickets for the Brisbane show, which starts at 7.30pm on Thursday 4 March, are just $15. Bookings may be made online.

A Sleep of Prisoners cast: