St John’s College within the University of Queensland students took to the streets in their chocolate and gold Hawaiian shirts, joining the Mud Army for a week to assist flood-impacted community members, including two Brisbane priests.

Mick Crossman said that his parents were thrilled with the assistance of current St John’s College students, also known as “Jabbas”.

“Mum and Dad were delighted when a group of friendly Jabbas turned up to start the clean-up,” Mr Crossman said.

“Being in Darwin, I couldn’t help them myself, but it was a relief to know the extended John’s family was taking care of my parents.”

At the garden centre and bistro, students scrubbed mud off walls, collected and disposed of debris, and threw out products and supplies that were unsalvageable. 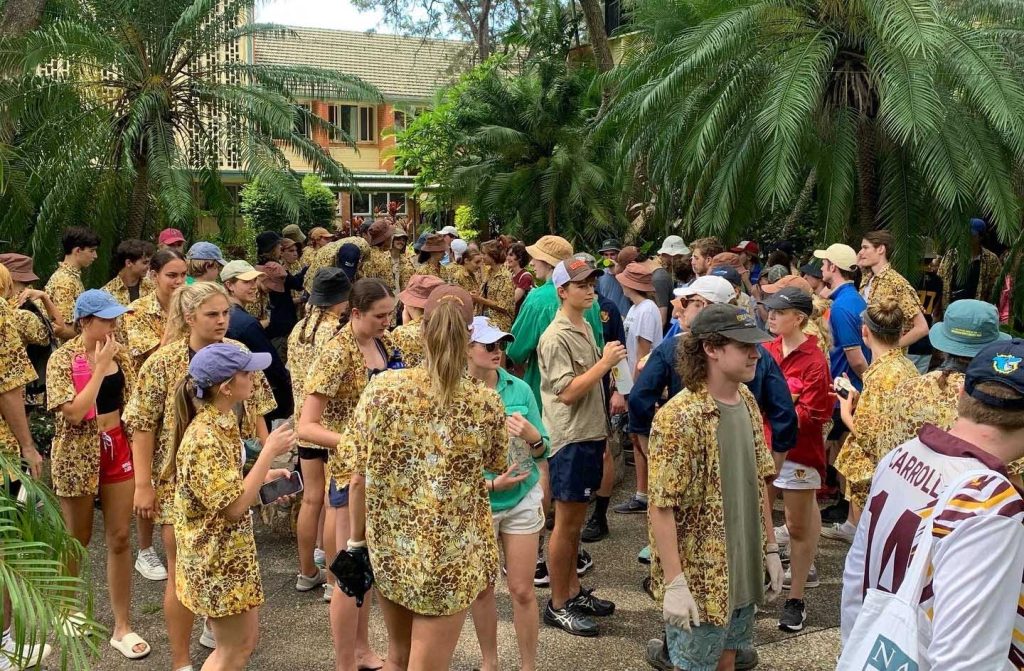 Resident advisor Archie Steele said that it was important for students to assist the community with flood recovery, even though it was emotionally challenging at times.

“We are fortunate and thankful not to have been impacted by the flood here at St John’s,” Mr Steele said.

“But it was important to us to help in the community because we know so many others who were.

“At one home nearby, we helped a family take years of photos out to the rubbish bin because they were covered in mud.

“It was hard to see material possessions destroyed that were sentimental to that couple.”

Alumni, known as “Old Johnians”, were also involved in the recovery, helping to put smiles on locals’ faces during a difficult time.

Jamie Rother, a 2010-2012 resident at the College, is now a farmer based in the Darling Downs.

Unable to sell his crop of sunflowers due to the Brisbane Markets in Rocklea being closed because of flooding, he decided the next best thing to do was to donate them.

Instead of letting six weeks’ stock go to waste, he donated more than 2,000 blooms to St Vincent’s Private Hospital and several charities.

Mr Rother said that he enjoyed bringing some unexpected cheer to doctors and nurses and charity staff and volunteers.

“They [staff and first responders] went through a lot of rough times recently –most of them are overworked and there are a lot of tragic stories out there,” Mr Rother said.

“This is a small act, but I think it really brightened things up for a lot of people.”