The Rev’d John (Jack) Hammer, who served with the 3rd Royal Australian Regiment, was recently awarded the Citation for Gallantry for participation in the Battle of Coral-Balmoral in Vietnam in 1968.

Occurring 50 years ago, this was the longest battle fought by Australian troops since WWII.

26 Australians died in the three and a half weeks of fighting, almost 100 were wounded and at least 270 Vietnamese people lost their lives.

The Australian troops were outnumbered three to one.

The battles of Fire Support Bases Coral and Balmoral are not widely known in Australia, yet they are among the most significant conflicts involving Australian Defence Force personnel in the Vietnam War.

Following these battles, the American President Lyndon B. Johnson wished to award the Australian units involved a Presidential Unit Citation, but this offer was refused by the Australian Government due to the political controversy surrounding the war. 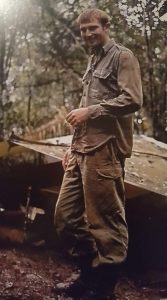 Jack Hammer in Vietnam in 1968, serving in the 3rd Royal Australian Regiment

Members of the Battalion gathered from all over Australia to receive the recognition, first in Canberra, then a fortnight later in Townsville.

It was an extremely emotional moment when these men marched together after 50 years from The Australian War Memorial towards Parliament House.

They marched in front of family, friends, serving personnel and community members, as they were finally acknowledged for their bravery.

In Townsville, close to 1000 serving men and women from 3rd Battalion, Royal Australian Regiment (3RAR) lined the streets in a guard of honour.

It was powerful to see young men and women of 3RAR acknowledging these now elderly Diggers for their bravery so long ago.

The Rev’d Hammer served for almost 1000 days in-country during the war, also fighting in the Tet Offensive and the Battle of Andersen.

He remained in the infantry until 1987, after serving for 22 years.

In 1997 he was ordained an Anglican priest in the Diocese of Brisbane.

His ministry saw him in Warwick, Allora-Clifton and Leichhardt and The Rev’d Hammer is now licensed to St Paul’s Anglican Church, Ashgrove serving in various parishes as a locum.