Australia’s first federal Modern Slavery Act was passed on Thursday, establishing requirements for businesses with an annual consolidated revenue of $100 million or more to report on slavery risks in their supply chains.

The Act, which is estimated to affect more than 40 million people trapped in modern slavery world-wide, is the result of years of advocacy by organisations, including the Anglican Church Southern Queensland, which is part of the Stop The Traffik coalition.

With Australians predicted to spend more than $50 billion this Christmas period, ACSQ Justice Enabler Peter Branjerdporn said that our consumer choices can have a big impact on the lives of the people who grow the food and make the gifts we buy this Christmas.

“As Christians, we are called to love our neighbour,” Mr Branjerdporn said.

“Christmas is a good time to reflect on who grows the food and makes the gifts we buy, as hospitality and gift-giving should come from a place of love.

“By buying fairly-traded or otherwise ethically-certified food and gifts, we are caring for the people we are buying for, but more importantly for the people who work in supply chains, many of who are at risk of modern slavery or other forms of labour exploitation.”

Chocolate is a popular food stuff to serve and gift to give at Christmas; however, the international chocolate industry is notorious for slavery and labour exploitation, including that of children. 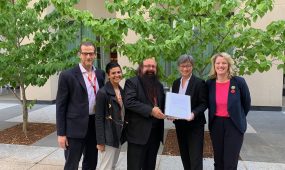 Stop The Traffik encourages consumers to purchase Fairtrade and other certified slavery-free chocolate to help eradicate child trafficking in the chocolate industry.

It is estimated that over 2.1 million children labour on West African cocoa plantations, where 70% of the world’s cocoa is produced before being sold to well-known confectionary brands found on the shelves of local supermarkets.

Many of these children are trafficked and trapped in debt bondage, as they carry out hazardous work in hot climates using chain saws and machetes while exposed to toxic agricultural chemicals.

Mr Branjerdporn said that there are a number of ways we can ensure that our food and gift purchases are ethically minded this Christmas.

“My top three tips for ethical shopping this Christmas are to donate to a charity in lieu of a gift, buy locally produced goods that are made from ingredients or materials that are locally sourced, or to buy fairly-traded or otherwise ethically-certified items, including prawns, coffee, tea, chocolate, sugar, fashion, sports balls, cosmetics, and jewellery,” he said.