Rosemary Gardiner was never certain she wanted to follow in her mother’s footsteps as a priest in the Anglican Diocese of Brisbane – but her recent ordination completes a journey that was 30 years in the making.

The Rev’d Gillian Moses, who was ordained herself almost 10 years to the day, was beaming with a slightly wider smile and a more ebullient glow of pride and joy than most others in attendance at the Ordination of Priests and Deacons for the Brisbane Diocese at St John’s Cathedral on Saturday, 1 December.

The Rev’d Gardiner, who appeared on ABC TV News with The Rev’d Moses, was one of four women and three men ordained by the Archbishop of Brisbane, The Most Rev’d Dr Phillip Aspinall, along with three women and three male deacons.

The Rev’d Gardiner said she first seriously considered a calling to ministry soon after she married her husband Lindsay in 2012 – verbalising for the first time some strong feelings that had been in her head and heart for many years.

“I first spoke to other Anglican priests whom I respected and listened to their insights and advice as I considered my suitability for a life as a priest,” she said.

“I spoke to my mother at various points during that year of reflection. She told me some of the realities of ministry, but she didn’t give me advice one way or the other.

“She was affirming, not discouraging and her main message to me was not to follow the same path as her just because she had become a priest – not to go into it blindly and not to rush it, but to take the vocation seriously and to arrive at a decision in my own time.” 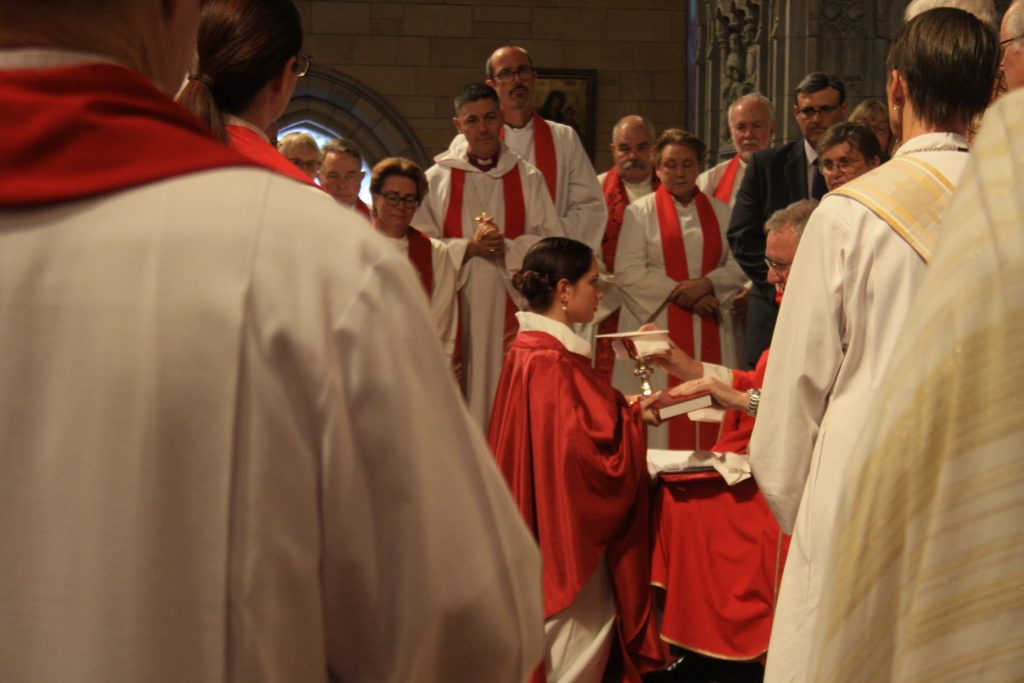 The Rev’d Moses was ordained in an era when women were making up for lost time: women were first ordained as priests in the Anglican Church of Australia in 1992 when the Archbishop of Perth, The Most Rev’d Dr Peter Carnley, ordained the first of 10 female priests, with five women following in the Brisbane Diocese in December of that year.

She was one of eight women ordained in 2008 and says women have always felt the call to ministry, but it has only been possible in recent years.

“More women have followed this path in the last few decades, especially as it is increasingly seen as normal and the generations for whom it was a novelty are decreasing,” she said.

“Women of Rosemary’s generation have not seen women excluded from ordination, so it is much easier to see themselves in that role without feeling they need to be pioneers or revolutionary.

“Rosemary has for a long time had this great love for the church and I’ve always recognised that her faith is important to her.

“I saw a lot of me in her, but I was very careful to let Rosemary be her own person and to create her own journey. She has an extraordinary gift.” 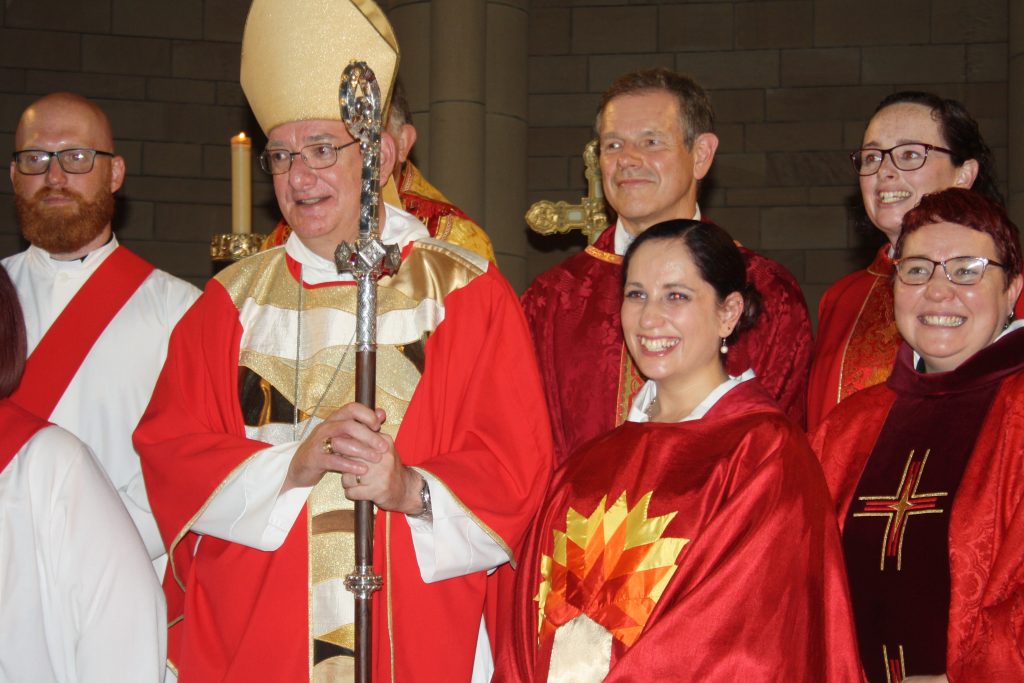 The Rev’d Gardiner, the eldest of four daughters, began studying at the Brisbane Diocese’s St Francis College at Milton in 2013. As a lifelong learner, she started a university Masters in English Literature, but put that on hold and embarked upon a Bachelor of Theology with a supportive and collaborative cohort of fellow students.

Halfway through her course, she became pregnant and following the birth of her son Edward, she decided to reduce her study load to allow her to spend more time with her “dream baby”.

“All of my family, especially my husband Lindsay who works in IT as a network engineer, have been incredibly supportive and have embraced every step of my journey with me on this rewarding and fulfilling path,” The Rev’d Gardiner said.

“It has been exciting to also share it with a wonderful cohort and with three other incredible women who were ordained with me. The Diocese and the Archbishop have been amazing in their encouragement and guidance and there are so many brave and committed women who have blazed a trail ahead of us.”

The increasing number of women ordained in the Brisbane Diocese continues a decade-long trend – since 2008, 43 women and 38 men have become priests. The vast majority of Anglican Dioceses ordain women as priests, with Sydney Diocese the only major city that doesn’t, along with several small regional dioceses.

The Rev’d Gardiner says she is happy that women, like herself and her fellow ordinands, feel like the Brisbane Anglican Diocese is a place where they can come forward and take up spiritual leadership positions.

“I was a jumble of emotions heading into our ordination with a mix of great joy, relief and satisfaction at having completed this stage of a special journey of love and devotion and it was lovely to head into a reflective silent retreat for three days before it to spend time preparing ourselves for the occasion,” she said.

The Rev’d Moses, who is currently school chaplain at St Aidan’s Anglican Girls School at Corinda, said she is most proud of the fact her daughter chose her own path and that she now shares a truly unique bond with her daughter.

“The bond between a mother and daughter is always special but there is something deeper and more profound in our situation – it’s a whole-of-life bond and we will be colleagues and get to do some wonderful community and liturgical work together,” she said.

Archbishop of Brisbane, The Most Rev’d Dr Phillip Aspinall said ordination was an amazingly profound threshold for those being ordained as priests and deacons.

“The Brisbane Diocese doesn’t set out to identify or encourage one gender or the other in terms of recruitment, but we do promote in the Church, the idea that God does call people to the ordained life, both men and women and we invite people to explore that calling,” Archbishop Aspinall said.

“But it might be that we are seeing a catch-up over the last decade. Women have only been able to be ordained for the last 25-30 years so it may be that women have felt the calling for a long time, but it hasn’t been possible for them to be ordained and now they’re coming forward which is truly wonderful.” 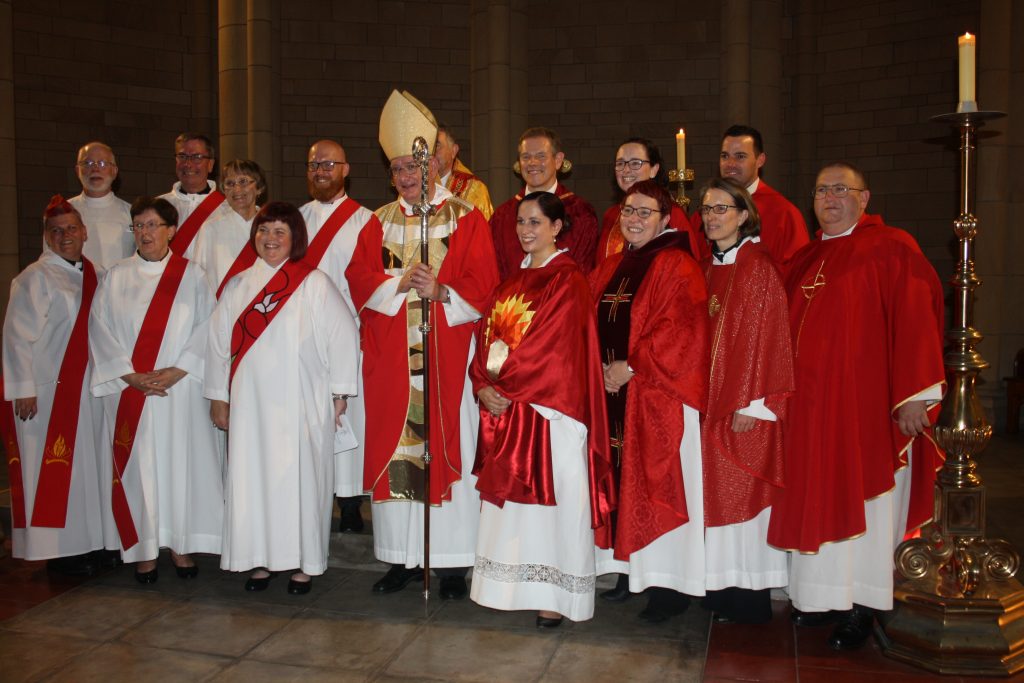 Following her ordination, The Rev’d Gardiner will continue her ministry for the month of December at St Augustine’s Parish, Hamilton under the watchful eye of one of her mentors, The Rev’d Dr Marian Free – before taking maternity leave. She is due to give birth to her second child in February.

When she returns later in 2019, The Rev’d Gardiner is eagerly looking forward to resuming the dual roles and joys of being a mother and a spiritual and community leader in her parish.

“I’m looking forward to celebrating my first mass in our parish and all of those other significant ‘firsts’ – such as the first baptism, the first wedding. I already have a close friend who has asked me to marry her next year,” she said.