In mid-2017, The Records and Archives Centre moved back to Church House, St John’s Cathedral Precinct, after five years in Bowen Hills. I started as Archivist in January the following year. Although I knew that the Archives had been in its current location in the 1990s (having worked as a volunteer for the first Archivist, Patricia Ramsey, in 1995), I have been curious as to how Church House was utilised before then. Little did I realise that there had been THREE different buildings named ‘Church House’, with predominantly the same role in the life of our Diocese.

The first ‘Church House’ was part of the Pro-Cathedral Precinct between George and William Streets. It opened in 1897 and was used as office space and as a book depot. In 1900 land adjacent to Church House was purchased for use by the Queensland Government. As the Government indicated it would need additional land, the Church decided to move the offices and the book depot to Adelaide House (then owned and leased by the Cathedral Chapter), which is of course now the residence of the Dean. From 1901, Adelaide House then became known (at least within the Diocese) as ‘Church House’. The previous offices became the headquarters for The Queensland Police Service – until it was demolished in 1963. 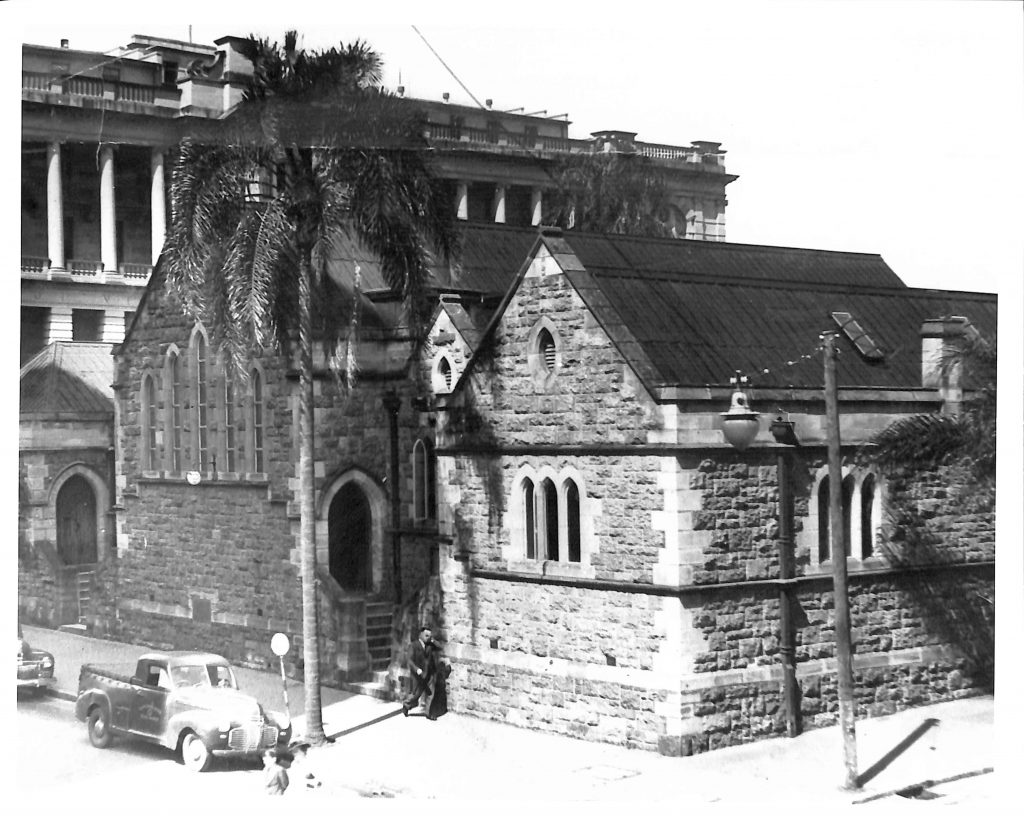 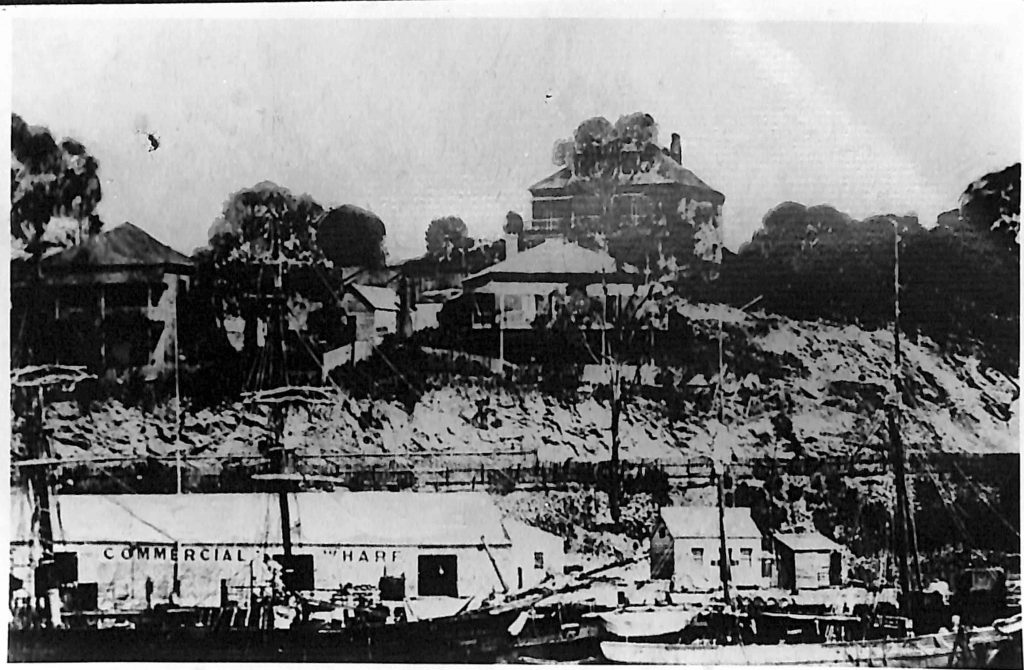 Adelaide House, built mid 1850s.: purchased by the Brisbane Diocese in 1899, and now the Deanery

In early 1909, the Cathedral Chapter decided to use money set aside from the sale of the Pro-Cathedral landsite. Part of this money was used for erection of St Luke’s Church on Charlotte Street (now the Pancake Manor) and St John’s Day School and Institute (now Webber House within the Cathedral Precinct). The rest of the money was to be used for the erection of a new office space and book depot.

This new building, designed by Robert Dods, was to include a Synod Hall and be similar in design to the St John’s Day School and Institute. Dods’ design would have had the Hall in between Webber House and Church House. An alternative design, drafted by noted Scottish architect Frank Loughborough Pearson, would have had the Hall built parallel to Ann Street and behind Church House (linked to the Cathedral by a cloister). The Hall of course never eventuated – and after six months construction, the new Church House was opened on the 15 October 1909. The British Architect, an architectural journal of the period, noted of the full design:

“It is seldom we are able to publish such eminently pleasing modern work. It would really seem that here at last someone is able to build up walls and roofs with some clear realisation of the values of outlines and relations of solids and voids”.

For much of its life, the third and current Church House continued as office space for the Diocese and Chapter on the upper floor (including offices for the Archbishop, the Registrar and the Home Mission Fund) and a large meeting room for Diocesan Council meetings, with the book depot taking up the ground floor. The book depot consisted of a large sales and storage area (taking up the full length of the building), a packing area, and office space for a manager and (in 1909) eight staff. Office space on the lower ground floor was also used at one point by Bishop George Browning where Adrian Gibb (Archives Researcher) now has his work desk. 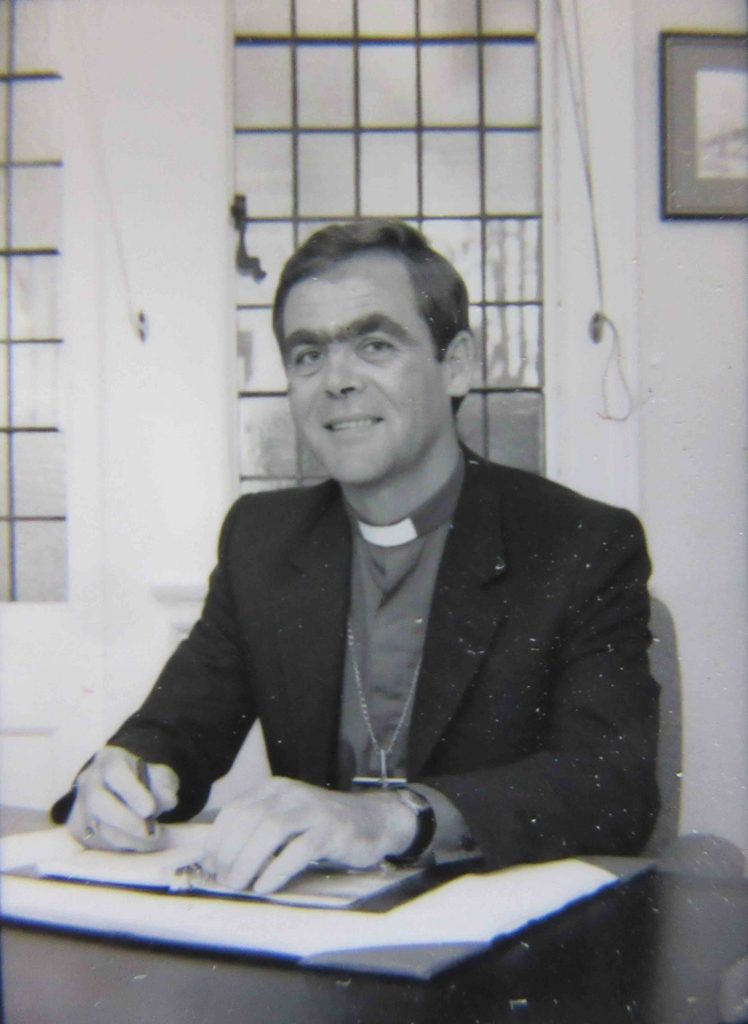 Bishop George Browning sitting at his desk on the ground floor of Church House, circa 1985

In 1991, St Martin’s House was refurbished and the Diocesan Offices vacated to their current premises and the Archives moved from its previous location in Webber House to Church House. For the most part, the Archives had the run of the ground floor and a part of the first floor (apart from small offices run by the Mothers Union, the Anglican Board of Mission, the Hospital Chaplain and the Diocesan Architect) up until 2012 – when white ants were discovered. The collection and reading room had to move to premises in Bowen Hills. After the Church House building was treated and refurbished, the Archives returned to the ground level with the Anglican Schools Commission taking the upper level.

The building is included in the Queensland Heritage Register, being “significant for its well resolved design and detail, forming an integral part of an ecclesiastical group of buildings”. Although it is often overlooked in favour of other grander buildings in the Cathedral Precinct, Church House still provides a vital role in helping to preserve and house the history of our Diocese. 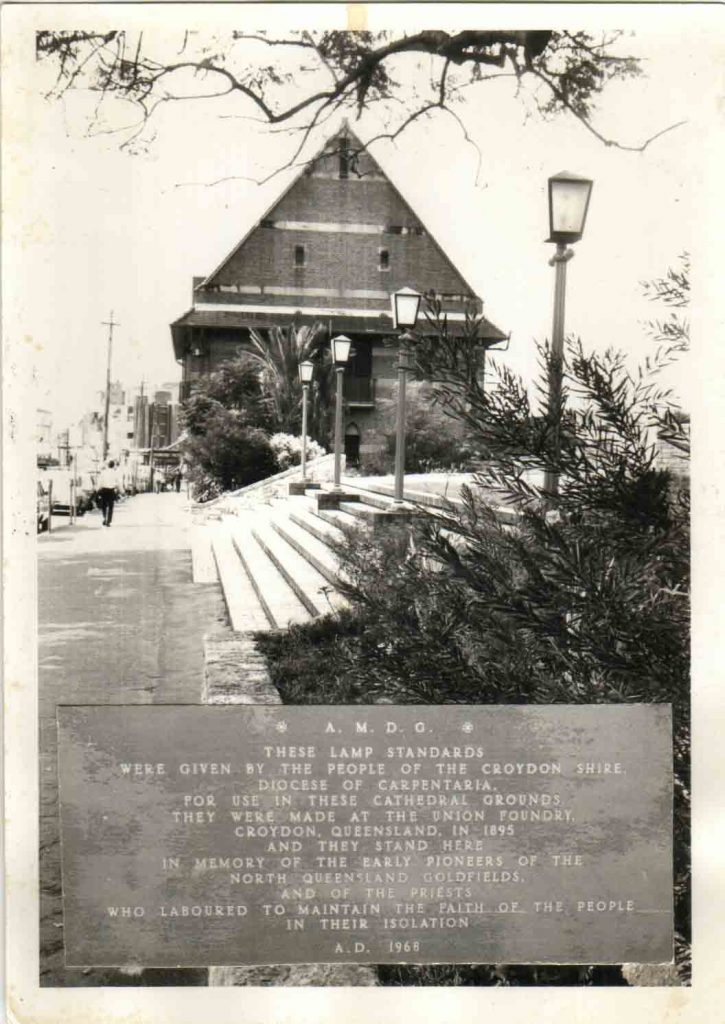 Church House and lampstands on the front steps of the Cathedral, circa 1968