Students from St Andrew’s Anglican College were announced the international champions in two divisions at the recent Future Problem Solving International Final in the US, putting Queensland and the Sunshine Coast on the map where students have the drive to be genuine problem solvers in the real world.

A contingent of students and teachers from St Andrew’s Anglican College represented Queensland and Australia on a global level recently at The University of Massachusetts while competing in the Future Problem Solving (FPS) International Final, alongside approximately 2,500 students from 14 countries around the world.

St Andrew’s teacher and Future Problem Solving coach Jillian Green said the results are a “substantial achievement” not just for St Andrew’s Anglican College, but also for Queensland and Australia.

“It illustrates the capacity our students have to be recognised for their efforts in problem solving, creative and critical thinking endeavours and the dedication of the staff to assist our students in realising their dreams, whilst making a real difference on a global level,” Mrs Green said.

The St Andrew’s contingent was made up of three team and individual competitors across three separate divisions.

During the FPS International Awards Ceremony, the Bully Buddies along with Mila were announced as first place International Champions in their respective divisions, while Will placed as an International Finalist.

“FPS is a dynamic international program involving tens of thousands of students annually from around the world,” Mrs Green said.

“It was developed in 1974 by creativity pioneer Dr E Paul Torrance to develop the ability of young people globally to design and achieve positive futures through problem solving using critical and creative thinking.”

This is the third time St Andrew’s students have made it through to the FPS International Final, with the College offering Future Problem Solving in a ‘competitive capacity’ to students in Years 6-10.

“As a teacher, this has been one of the most memorable moments of my career,” she said.

“To see these inspirational students become International Champions and an International Finalist has been such an honour. It takes a lot of hard work and dedication from all involved to help these students realise their passions and dreams, but as an educator, I wouldn’t have it any other way.”

For the four members of the ‘Bully Buddies’ – Luca, Lachy, Xavier and Charlie – becoming International Champions for a project they care deeply about is just the icing on the cake.

“Going to America to represent our country and present our ideas to the world has been such a great honour because the ‘Bully Buddies’ has been one of the greatest experiences of my life,” Luca said.

“It has been awesome to work with my friends to come up with ways to prevent bullying and knowing we have spread our message across our community and now the world,”  Lachy agreed.

“I have made more friends, become more confident in what I do, but importantly I have gotten the opportunity to make changes in my school, my community, and my country. I have loved every second of this opportunity,” he said.

“I will always remember this experience,” Xavier said.

“I was proud to show our project to the FPS International judges and overjoyed when they awarded us first place.”

Charlie said that he credits his teacher for setting him on this path.

“Before I became a ‘Bully Buddy’ I was just a regular kid who liked playing AFL and cricket. It wasn’t until Mrs Green asked me if I wanted to participate in a competition about solving modern day problems when I began to have an interest in this program.”

“The ’Bully Buddies’ have meant so much to me because I know that, bit by bit, I’m helping. And as Ghandi once said, ‘Be the change you wish to see in the world.’ And that is what we are doing.”

Nothing happens without a lot of behind-the-scenes work and Mrs Green thanked the “wonderful team” and the “excellent support from our College, parents and the Sunshine Coast Council” that made the long trip to Massachusetts possible. 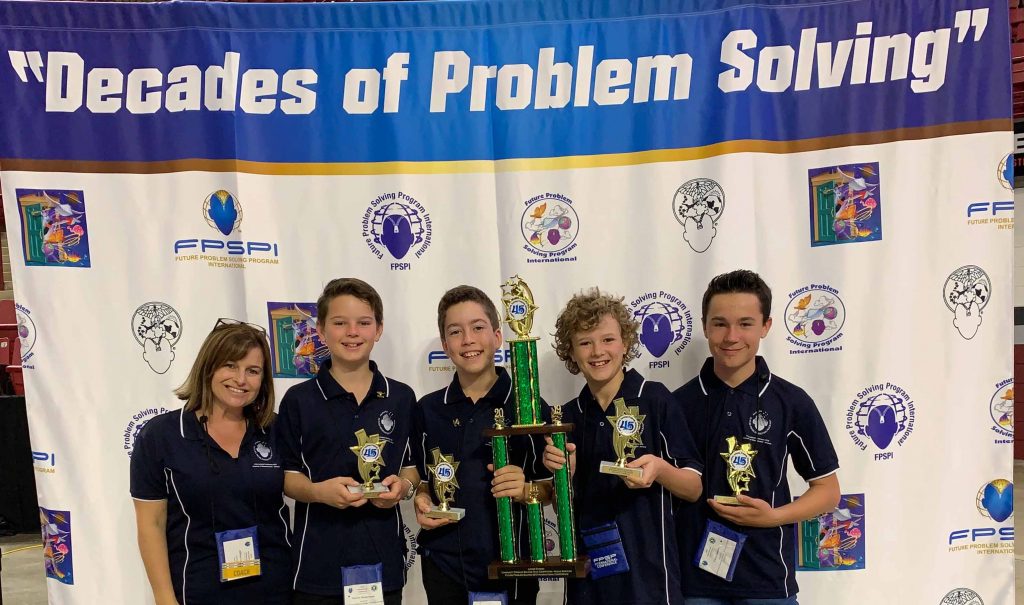