On the radio Elton John was belting out, “I guess that’s why they call it the blues”.

“Did you hear what’s on the radio?” Anna  asked me as she was mixing up a batch of blue hair dye and my wife  Helen (The Rev’d Helen Paget, Priest in Charge of Boonah – Harrisville Parish) and I were settling back to get ready for the 2019 Long Ride. “Yep,” I promptly responded.

Blue is the colour of the Prostate Cancer Foundation of Australia’s (PCFA) logo and the PCFA is the beneficiary of The Long Ride, hence the hair dye as we prepared for our ride to Darwin.

“Chris Dunne introduced the concept of The Long Ride as he was nearing compulsory retirement from the RAAF at age 55 in 2004. Since then he has run nine successful Long Rides across Australia involving countless people. The first Long Ride was introduced in 2007 in support of the Royal Flying Doctor Service, Australia. This event raised $50,000 and had approximately 300 riders involved at any one stage.”

The Long Ride takes place every 18 months and has travelled to Darwin (three times), Perth, Sydney, Cairns, Uluru and Margaret River, and we have completed a lap of Tasmania. Each ride consists of routes from all capital cities and groups meet up along the way. While we travel in small groups of no more than eight bikes, the highlight is the final leg into the destination with all bikes travelling together. 320 motorcycles travelled into Margaret River in 2016, with crowds waving from the sides of the road. This year’s run into Darwin included over 200 bikes and a police escort, with the officers taking point on the intersections in the city to ensure a clean run in. 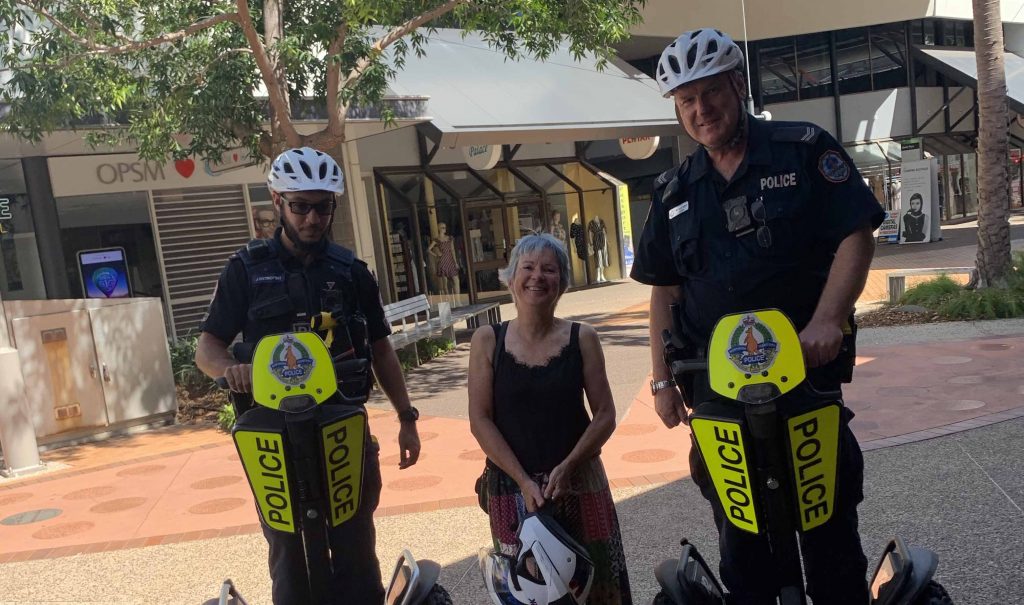 We left Boonah on Sunday 12 May, and rode into Darwin on the following Saturday afternoon. After taking a rest day on the Sunday to attend the Eucharist at Darwin Cathedral and catch up with a few friends, we hit the road again on the Monday, arriving back in Boonah on Saturday 25 May – two weeks and a day after leaving.

One of the aims of the ride is to raise awareness of men’s health issues, as well as raising funds for PCFA. Our routes take us through many isolated outback towns where some service groups help out by hosting functions.

This has been the sixth Long Ride that I have done, and Helen has participated in five, the first three as pillion and the next two as rider. After travelling across the Nullarbor seeing little but the back of my helmet, she figured it was time for a more hands-on experience.

The rides vary depending on the destination. In 2016 we took 10 days to get to Margaret River but then flew home, having the bike transported back home. The trip to Tasmania ended just as the Australian round of the MotoGP was being run. Following on from a little bit of lobbying, the PCFA was given the status of being the official charity of the Australian MotoGP. Those who were able, spent the weekend at the MotoGP proving educational material and rattling collection tins.

Since becoming involved with The Long Ride, we have chosen to use some of our holiday time to support the event. Firstly, we have enjoyed the travel and the comradeship of the motorcycling community engaged in a worthwhile cause. I doubt that there is anyone who has not been touched by prostate cancer, either personally or through the loss of a loved one. I have lost count of number of men I have known who have been touched by the disease. In a sense we carry their memory with us on the ride.

I have to admit I thoroughly enjoy spending the day covering hundreds of kilometres on the bike. Doing so with like-minded people adds to that enjoyment. Being there and being known to be clergy has an impact on those around us. They begin to see people of faith in a new light. On a couple of occasions I have been asked to lead a time of prayer ahead of our departure and I have happily accepted to invitation. To me, participation meets a couple of the Marks of Mission. We are responding to human need by supporting the work of the PCFA. And, we are proclaiming the Good News that God is intimately involved in the lives of all God’s people no matter who they are or where they are on life’s journey.

The success of the ride is easy to see. Hundreds of thousands of dollars were raised for PCFA to fund research, education and specialty nurses, but the impact on lives has also been tangible. On one ride a number of participants decided to have their prostates checked, prompted by the association with PCFA. Eight riders subsequently discovered they had early stage prostate cancer and were successfully treated. Who knows how many men along the way have also been prompted to have their prostate checked? The blue hair has been a real conversation starter, so I think it will be making a re-appearance each ride.

If you are an experienced rider craving a little adventure and an opportunity to make a difference in the lives of others, why not join us for the next Long Ride? It will be toward the end of 2020 and the destination will likely be announced later this year. Just keep an eye on the website for updates.