Slavery has not been abolished. In 2016, there were an estimated 40.3 million people in modern slavery, comprising 15.4 million in forced marriage, and 24.9 million in forced labour in industry, agriculture, and domestic settings. Women and girls are disproportionately affected by commercial exploitation, accounting for 99% of victims in the sex industry, and 58% in other sectors. In 2014, this dark enterprise generated US$150 billion in profits globally for traffickers, derived from forced labour. To put that figure in perspective, it exceeds 10% of Australia’s economic wealth (GDP). Human trafficking is built on what is believed to be the third-largest – and fastest-growing – organised transnational criminal enterprise.

Human trafficking, and the slavery it enables, rest on abuse of power over vulnerable people, manifested as coercion, abduction, fraud, deception, and ill-gotten consent. Human trafficking is “the action or practice of illegally transporting people from one country or area to another, typically for the purposes of forced labour or sexual exploitation.” This is a scourge that exists locally, with a Queensland couple convicted earlier this year for variously trafficking and forced labour offences over a period of eight years. Slavery and human trafficking are here in our midst. How this reported case scales up to actual numbers in our region alone is difficult to estimate. In countries where protections of the vulnerable are weaker, the scourge is certainly more widespread.

On Tuesday 30 July, we mark World Day Against Trafficking in Persons. It is the same day that we commemorate anti-slavery social reformer William Wilberforce (1759-1833) in the Lectionary. Wilberforce was a leading anti-slave-trade activist. His parliamentary campaigns brought about the Slave Trade Act of 1807 (abolishing state-sanctioned trafficking of slaves) and, days before he died, the Slavery Abolition Act of 1833. The efforts just to bring about the Slave Trade Act took over 20 years. 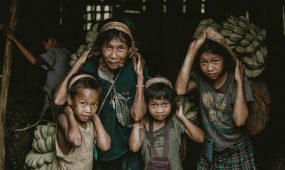 Where is the hope in the observances and commemoration of 30 July? The statistics are staggering. The lost lessons from history are appalling. The degrading denials of liberty and dignity are shocking. The injustice is overwhelming. Among the aggregation of these horrific data are precious human lives, all made in the image of God. If this injustice strikes us to the core – and how can it not? – perhaps we feel as Jesus did “when he saw the crowds … [who were] harassed and helpless” (Matthew 9.36). The “compassion” which Jesus felt was not a light benevolence. It was σπλαγχνίζομαι (‘splagchnizomai’), which means to be moved in a way which is utterly gut-wrenching.

It is easy to despair. The scale of the injustice seems insurmountable. Policy response seems to be ineffective. The sophistication and covertness of the crime seem to be impenetrable. How can we effectively activate our baptismal promise to renounce Satan and all evil, especially the evil writ large of human trafficking?

In Matthew’s gospel, it was Jesus’ gut-wrenching compassion for the helpless crowds which catalysed the commissioning of his disciples to proclaim the good news of the kingdom of heaven being near and to exercise restoration and healing (Matthew 10.5-8). Likewise, our launch-pad for action can be our visceral anguish over human trafficking in facing its formidable statistics; in contemplating its violation of God’s image in our fellow human beings; and in seeing its ugly reality on our doorstep. We can agitate for our parliamentary representatives to adopt the United Nations’ 2018 Global Compact for Safe, Orderly and Regular Migration (Australia abstained). We can agitate for our parliamentary representatives to engage with the complexity of border protection and its harsh legislative impact on refugees and human trafficking. We can encourage our parishes to bring awareness of human trafficking to our local communities in order to raise up voices to proclaim the good news of release of those enslaved in captivity (cf. Isaiah 61.1, Luke 4.18). Like William Wilberforce, we should be prepared to agitate and advocate over the long-haul.

And we can pray, gut-wrenchingly so.

The Anglican Church Southern Queensland is a member of StopTheTraffik, which has a useful website that you can use as a starting point to educate yourself about human trafficking, and associated labour exploitation and slavery. If you would like to assist the Anglican Church Southern Queensland with their initiatives in the anti-slavery space, please contact the ACSQ Justice Unit.