The first time I went ‘overseas’ I was a child of eleven years. None of my family had been abroad before. We were on a comfortable ‘family tour’ package. From the windows of our tour bus, and as we walked along footpaths and in the crowded markets, I saw many children my age and even younger working alongside their parents. There were children working in fields. There were children working in weaving shops; quick hands throwing shuttles or tying tiny knots. Twenty years later in Uganda, I saw children carrying water for miles, herding goats, and breaking rocks by hand to make gravel. On the news, we see kids picking waste at tips, working in mines, and doing delicate hand-work in manufacturing.

Children have been included in family activities since time immemorial. Participating in work that does not damage health or personal development, or interfere with education, can be valuable for growth and maturity. Children develop social, emotional and productive skills, and perhaps even contribute to their family’s welfare.

The problem of ‘child labour’ arises when children are forced to work in such a way that they are deprived of their childhood, potential and dignity, and their physical, intellectual and emotional development is harmed. Child labour can interfere with or deny the possibility of attending school. At worst, children are enslaved, separated from their families, exposed to serious hazards, or left to fend for themselves. The first director of the International Labour Organisation (ILO), Albert Thomas, said, “It is the exploitation of childhood which constitutes the evil…most unbearable to the human heart. Serious work in social legislation begins always with the protection of children.”

The ILO was founded in 1919, 100 years ago this year. The preamble mentions the protection of children; the same year the first of several conventions on minimum age was adopted (interestingly Australia did not ratify this or subsequent conventions on this topic1).

Wednesday 12 June is the UN World Day Against Child Labour. This specially demarcated day seeks to raise awareness of the exploitation of children, and to support the goal to end child labour in all its forms by 20252.

This is a big issue! It is estimated3 (2016) that some 152 million children are in child labour; about half are under age the age of 12, about a quarter are aged between 12-14, and about a quarter are 15- to 17-years-old. About 70% work in agriculture and livestock, 10% in industry, and 20% percent in services. Over half work in hazardous environments. Some 4.5 million children are in slavery or forced labour4, with 1 million in commercial sexual exploitation (prostitution and pornography), and the rest in various illegal or dangerous jobs, including in mining, the drug trade or other exploitative industries. Some children are forced to take part in armed conflict, working as combatants, porters, cooks or acting as ‘wives’ to soldiers.

Although much child labour takes place in the family unit, doing subsistence and commercial farming and herding, in some places this is in the added context of debt bondage or hereditary slavery. Other correlating factors include situations of conflict and disasters, climate change, migration, trafficking, inequality and urbanisation. Child labour is heavily weighted in developing countries, but there is clear evidence of child labour (including forced) in Western contexts as well.

Of course, we Western consumers ‘benefit’ from child labour when we purchase cheap items. Western corporations seeking to enhance profits often overlook the content or origins of their supply chains, thus risk importing products tainted with the exploitation of children. For example, many Australian fashion chains were caught in the fallout of the exposure of exploitative supply chains after the Rana Plaza (Bangladesh) collapse in 2013 (please see the Baptist World Aid Australia Ethical Fashion Guide to help you make ethical fashion choices). Another common item to place under scrutiny is chocolate, particularly at Easter and Christmas. A discerning buyer will learn that very little chocolate is certified child labour and slavery-free. To be sure, you will need to look for chocolate with certified labelling sold by participating Australian retailers, and likely pay a premium for ‘ethical’ chocolate.

A list of goods produced by child labour published by the US Department of Labor is eye-opening…the most prevalent consumables containing child labour in the supply chain that may come into Australia include gold, sugar, coffee, tobacco and cotton. Look deeper into the list and you find fashion/footwear, carpets and even Christmas decorations! And then there are the rare minerals needed to manufacture your mobile phone, fruit and vegetables for the dinner table, pumice stone to buff your feet, palm oil for (well…loads of items, as per page 20), mica for makeup, and bangles or gemstones for jewellery. So, we need to make a dedicated effort to inform ourselves about ethical buying, so we don’t (unintentionally) contribute to the problem of child labour. 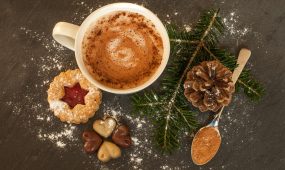 How to ensure your Christmas gifts and food are slavery-free

Given Jesus’ commands to cherish children and to love our neighbours, as Christians we should care deeply about the issue of child labour. Like many major problems in the world, it is a ‘wicked’ problem, with poverty, inadequate state governance, global supply chains, crime, climate change, structural inequalities in trade systems, capitalism, conflict and our desire to purchase the cheapest consumables possible all contributing.

However, I would encourage every Christian to seek out information about the issue, and to search out ethical buying guides and the like so we can influence change directly through our purchasing dollar. The Anglican Church Southern Queensland is a member of StopTheTraffik, which has a useful website that you can use as a starting point to educate yourself about child labour and other forms of labour exploitation and slavery. Another way is to lobby your local MP for robust laws requiring supply chains to be certified child-labour-free. And pray for the Spirit to bolster decision-makers in corporate organisations and governments with courage to effect positive change at the global level.

Only then will the end of child labour be possible.