As an Archivist, I am often asked by parishes as to what kind of records to send to our Diocese’s Records and Archives Centre. While certain records, such as church registers, have historical value to the Diocese and to the broader community in general, one type of record format that commonly causes confusion as to their value is photographs.

In today’s modern society multiple images can be taken almost instantaneously, particularly with mobile phones. When one takes an image, the technology can also capture other information – such as location, time, and faces (the latter with recognition software). Before digital cameras, this information had to be captured by the photographer. 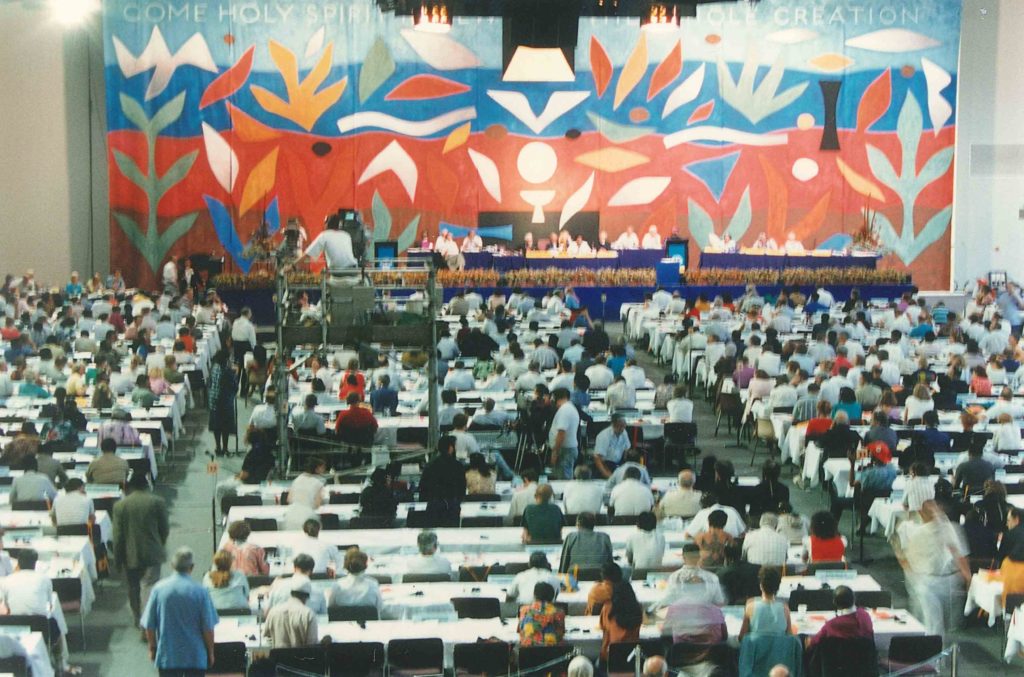 The above photo shows a religious conference – but where and when did this conference occur? The banner states “Come Holy Spirit…Holy Creation” – but no location, date or organisational names are obvious. What is obvious is the back of people’s heads. 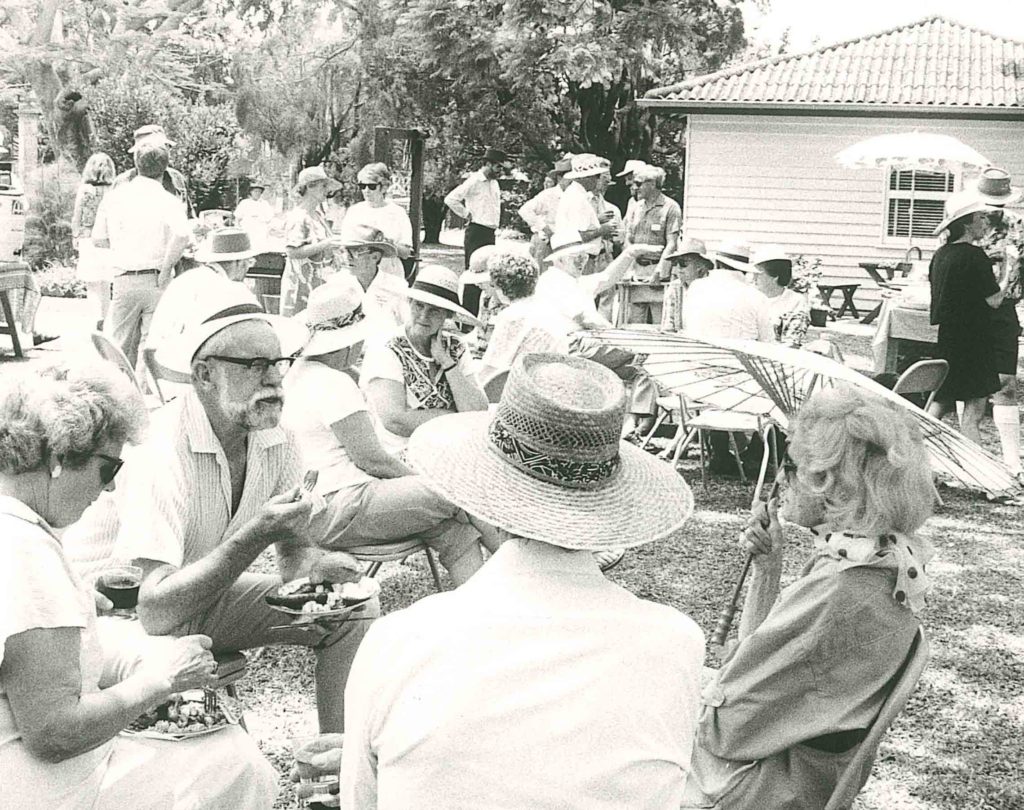 One of the most common photos in our collection is that of the ‘Parish Social Gathering’. In most cases, parish staff capture the context of the image. In this photo, apart from two persons, the backs of heads are primarily prevalent. Without additional context, this photo does not have any real value. 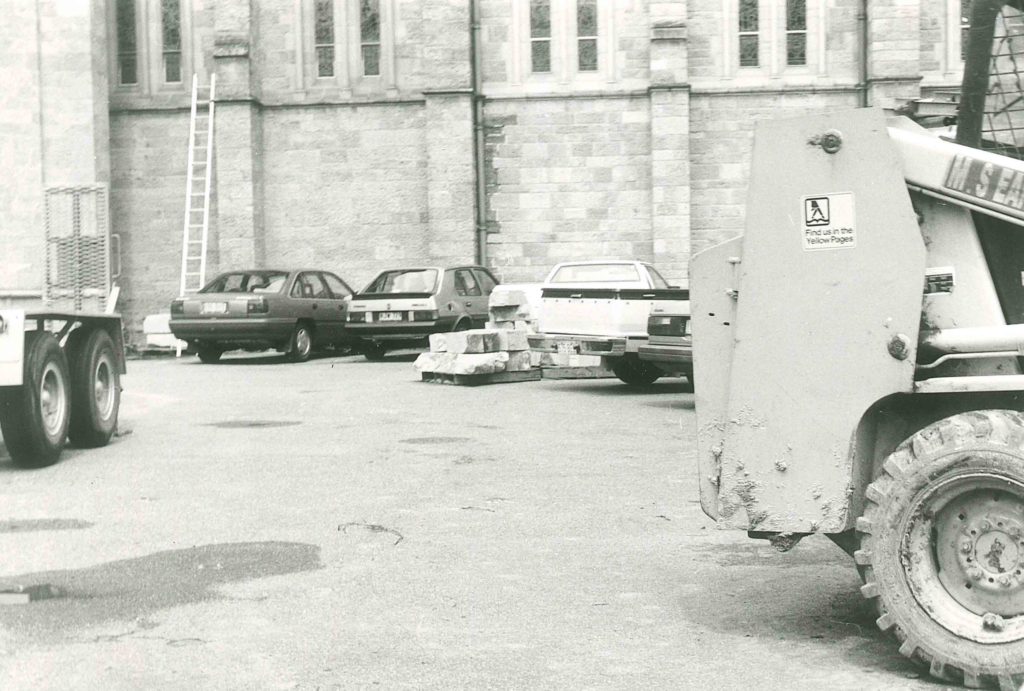 3. Image of Cathedral (stones in car park background) during third stage of construction (mid- to late-1990s)

The Archives has many photos of the Cathedral – the construction of the third stage in particular. While the importance of capturing the development is obvious, there are many shots where the context is so far in the background that its value is overshadowed by other photographs. One does not have to save everything – if you have multiple shots of the same thing, pick the best one. 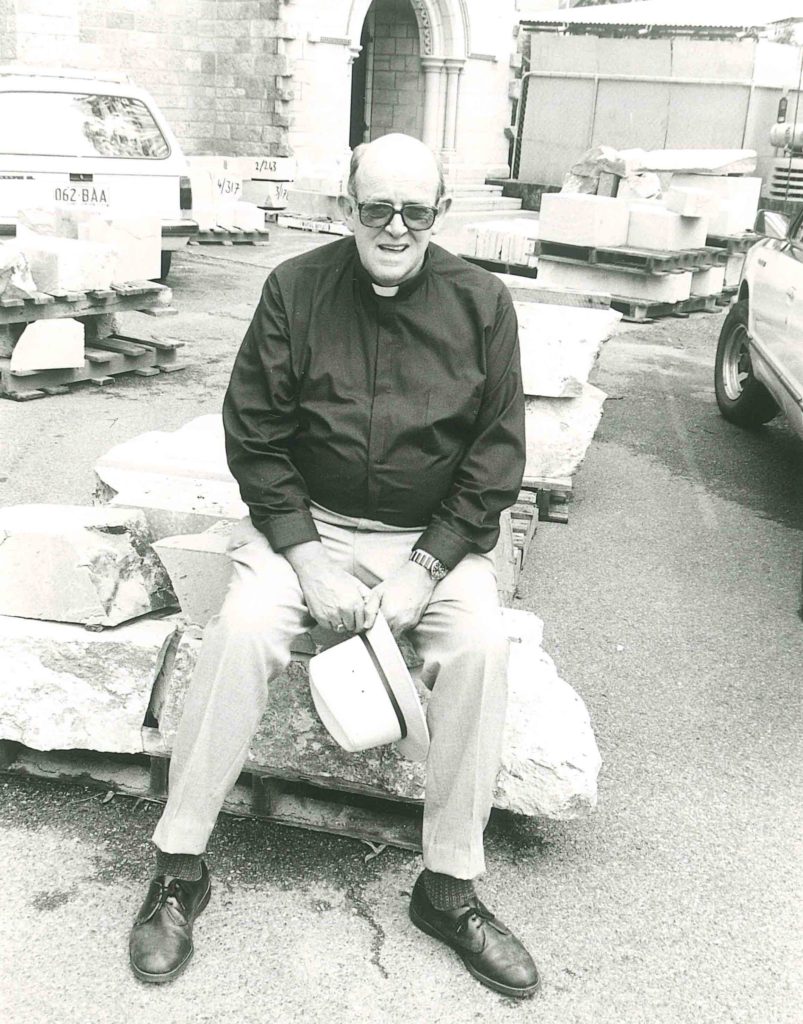 4. The Rev’d Harvey Dineen, taken during the third stage of construction of the Cathedral (mid- to late-1990s)

The second shot was also taken during the third stage of the Cathedral’s construction. It is valuable in respect of capturing an image of The Rev’d Harvey Dineen. The Archives has many shots of clergy, sisters and brothers; however, not all are identified. In this case, someone had the foresight to write Fr Harvey’s name on the back of the photograph. If possible, the context of the photo (particularly the identity of individuals and where and when the image was taken) should be captured using a soft-lead pencil on the back of the image. 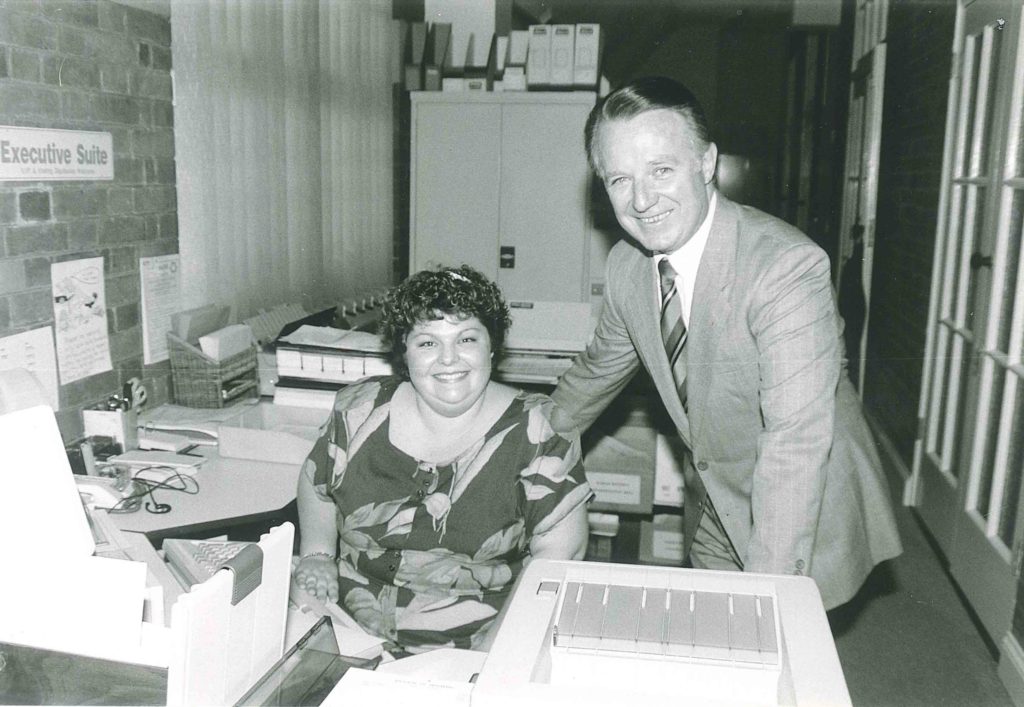 On occasion, there may be little context that is obvious – but the image is aesthetically pleasing. The above two images are of a Mothers Union branch meeting and two staff members working in St Martin’s House, respectively. The identities were not captured, but they do show the inner workings of parishes and work areas (including old technology), and their faces are clearly captured (making future identification possible).

In general, the most valuable photographs are those that exhibit the following criteria:

In terms of non-selection, any unwanted photos which are out of focus, faded, or do not capture Diocesan-related events should be securely disposed of.

I will look to publish this guidance in a factsheet for parishes next year.

Again, backs of heads are almost always a no-no – unless the event overshadows the heads or explains why no-one (apart from that one person at the front!) is not looking at the camera. 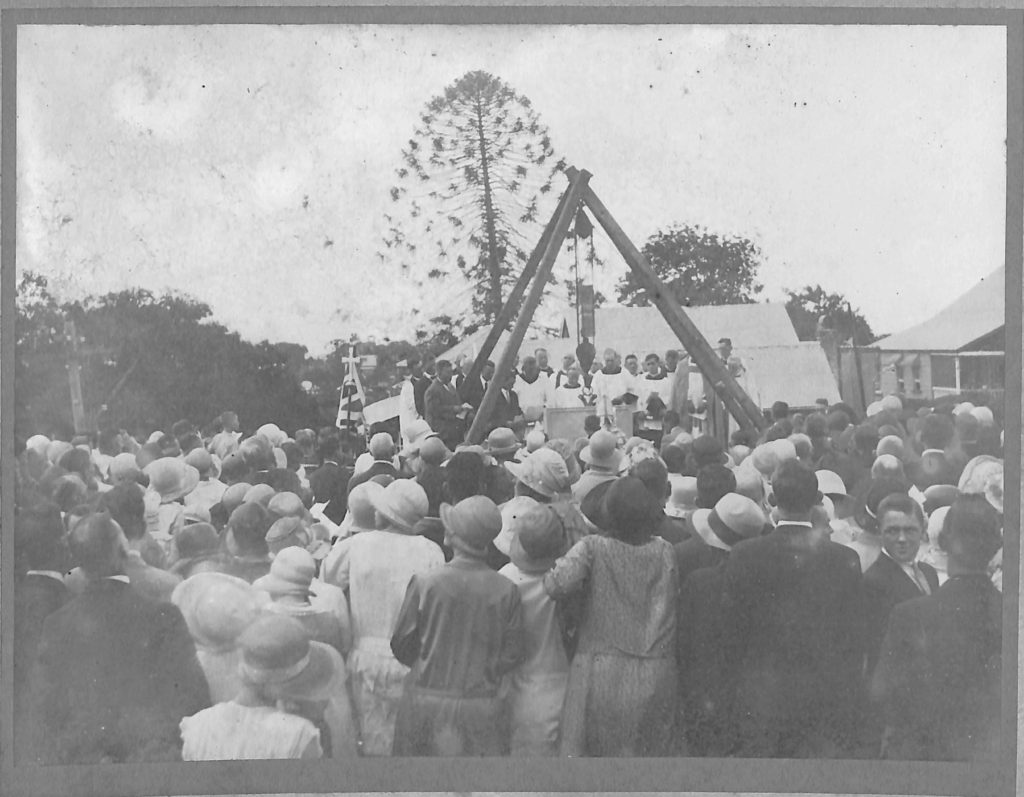 My last photo captures all the criteria for selection – an important location (St Francis College / Chapel of the Holy Spirit) where the person pictured (The Rev’d Kaye Pitman) is identified on the back. The photographer also took their time in setting this up, as it is also aesthetically pleasing. 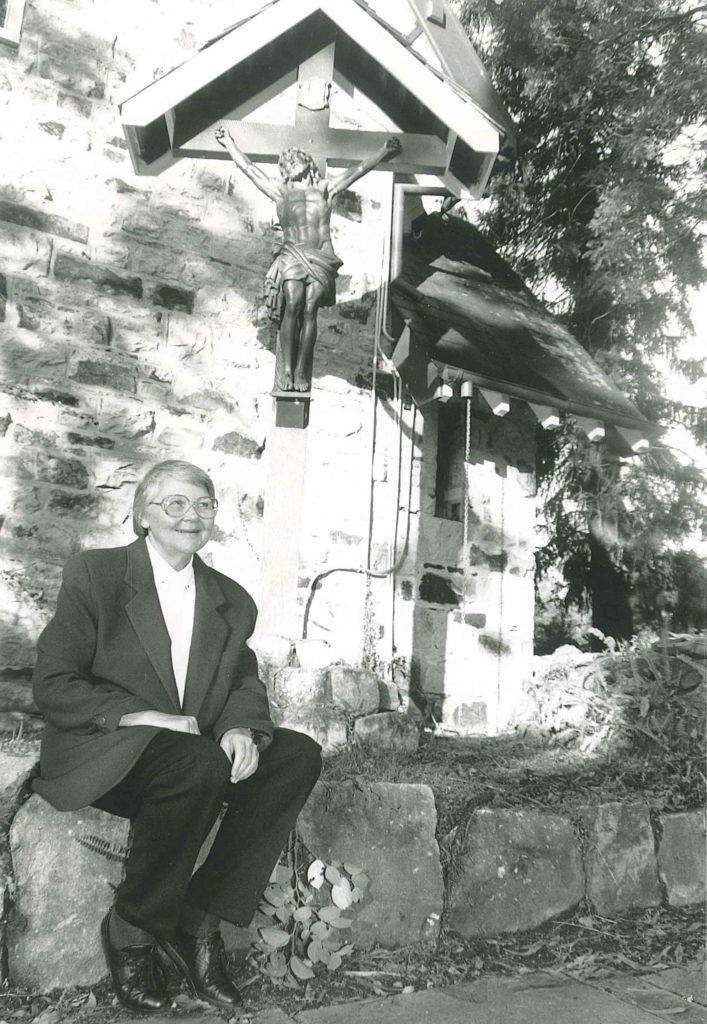 8. Image of The Rev’d Kay Pitman at St Francis College outside the Chapel of the Holy Spirit (early 1990s)

If you identify anyone in these photos (or if you took any of these photos), please contact me on 07 3835 2333 or at archives@anglicanchurchsq.org.au. I am always happy when the context of our history is improved or enhanced, as it makes researching much easier!

Re image #6, after publication of this feature, Chris Nelson (GM/Registrar for The Diocese of Grafton) emailed the Archives team to advise that: “I believe that the unlabelled photo within the St Martin’s House offices includes Mr Trevor Rigby who did some consulting work on the operation of the Diocesan administration. Trevor was a management consultant and a member of the Anglican Church. I believe that Trevor was regular at St Mark’s, Clayfield and moved to the Chermside Parish at one stage.”