“I ask not only on behalf of these, but also on behalf of those who will believe in me through their word, that they may all be one. As you, Father, are in me and I am in you, may they also be in us, so that the world may believe that you have sent me.” (John 17.20-21)

This annual get-together of local churches in obedience to the prayer of Christ and to celebrate what we have in common, has faded somewhat in the past few decades. What used to be a vibrant gathering in the 1960s and 70s has become a shadow of what it used to be since I was ordained 40 years ago. What then is the Week of Prayer for Christian Unity and why do we pray for Christian unity?

Churches, for a variety of reasons over the past 1000 years, erected very high fences separating themselves from others whom they believed had turned away from the truth or seemed too different from themselves. The one Church became a plethora of churches, and most of this division happened while Asia and Africa were being colonised by European countries from the 16th century onwards. The various large churches of Europe went with the traders and settlers and transported their divided Christian faith to new locations. Towards the end of the 19th century young church leaders in Asia saw that the multitude of different churches were confusing the local people and proving a stumbling block to evangelisation. They challenged the heads of their churches in Europe and America to take seriously the command and prayer of Jesus for his disciples to stay united. In 1910 a conference was held in Edinburgh in response to their plea and 38 years later their visionary work saw the World Council Churches formed.

The decade following the 1910 conference saw Europe transformed. World War I and the rise of communism in Russia caused hundreds of thousands of people to flee from their home countries to seek refuge in safer places. Many of these folk found their way to France, and in Paris a young Roman Catholic priest named Paul Couturier came face to face with Russian Orthodox people. He was fascinated to find a Christian tradition that was very culturally different to his own and yet so similar. These two great churches had fallen out of fellowship nearly 1000 years earlier but now he was making friends with those who had been regarded almost as enemies.

Couturier, who became known as the ‘Apostle of Unity’, closely examined the scriptures and theology that highlighted the importance of Christian unity and met regularly with like-minded priests to discuss such topics. They formed a dialogue group in Les Dombe that met regularly with the group of Protestant theologians who had carried on the 1910 energy for reconciliation. He also maintained close contact with another visionary Catholic priest, Pierre Teilhard de Chardin, a scientist who saw that all humanity shared its unity in and through Christ, the eternal creative Word of God (John 1). Couturier and de Chardin believed that the more we seek reconciliation and unity in Christ, the more we are able to understand the being and mind of God.

During this time, Couturier believed fervently that any move to overcome hundreds of years of separated Church life, could only succeed through prayer and personal action. Thus in 1934 he established a three-day prayer commitment for Christian unity and in 1939 that developed into a Week of Prayer for “unity as Christ wills it”.

Continued dialogue between these keen proponents for unity in The Roman Catholic Church and the World Council of Churches, saw the creation of the present Week of Prayer for Christian Unity in 1968. The time set for the week in Australia was the seven days between Ascension and Pentecost. This is the time of the year when the Church maintained a focus upon the dynamic life of God and God’s activity in the world through the Holy Spirit.

When local churches came together in Australia in 1968 it was a new experience, especially for older members of our churches. They had grown up in a culture of ignorance and at times, antagonism, between the Catholic and Protestant churches. In many ways the Week of Prayer for Christian Unity has helped to achieve one important thing – the breakdown of fear and suspicion that churches and Christians had lived with in Australia through the 19th and much of the 20th centuries. Consequently, younger members of our churches today have grown up in a healthier atmosphere and, thus, do not understand why Christians of alternative denominations once did not fellowship with one another.

Because much of the old fear and suspicion has been removed from church life, the Week of Prayer for Christian Unity has declined in its observance in recent decades. The unity of God’s Church, however, is more than merely overcoming fear and suspicion of difference. Relations between the separated parts of the body of Christ have certainly improved but we cannot be content with this. Acceptance of ongoing separation within the Body of Christ is disobedience to the will of Christ. Continuing separation means that our ministry in the Kingdom of God is far less effective than it should be. We must never ask why there is a need for prayer and action for reconciliation; we must ask how continued separation can be justified.

The theme and material for the Week of Prayer for Christian Unity each year is produced by the local churches of a particular country. This enables local churches throughout the world to learn something more of the rich human diversity worked by the Holy Spirit. The international material is disseminated in Australia by the National Council of Churches in Australia (NCCA). We in Queensland have a personal involvement in this because the NCCA engages closely with Queensland Churches Together so the latter can help ‘Australianise’ the former.

The theme for 2020 calls us to move from shared prayer to shared action. The international resources have been prepared by the churches in Malta. The 2020 theme, ‘They showed us unusual kindness’ (Acts 28.2), remembers the historic shipwreck of Paul on the island of Malta and calls us to a greater generosity to those in need.

The Week of Prayer for Christian Unity in 2020 extends from Sunday 24 May to Sunday 31 May. Please encourage your church to celebrate this with your fellow local churches as much as possible given some of the limitations of COVID-19. Please remember that the unity of his followers is where Jesus’ heart and mind were focussed on the night he was betrayed.

The National Council of Churches in Australia website has a range of resources available for use during the Week of Prayer for Christian Unity.

Editor’s note: Join the leaders of Christian churches in Brisbane to pray for Christian unity through a live-streamed Ecumenical Service at St Stephen’s Catholic Cathedral on Wednesday 27 May at 7 pm or watch later on demand. 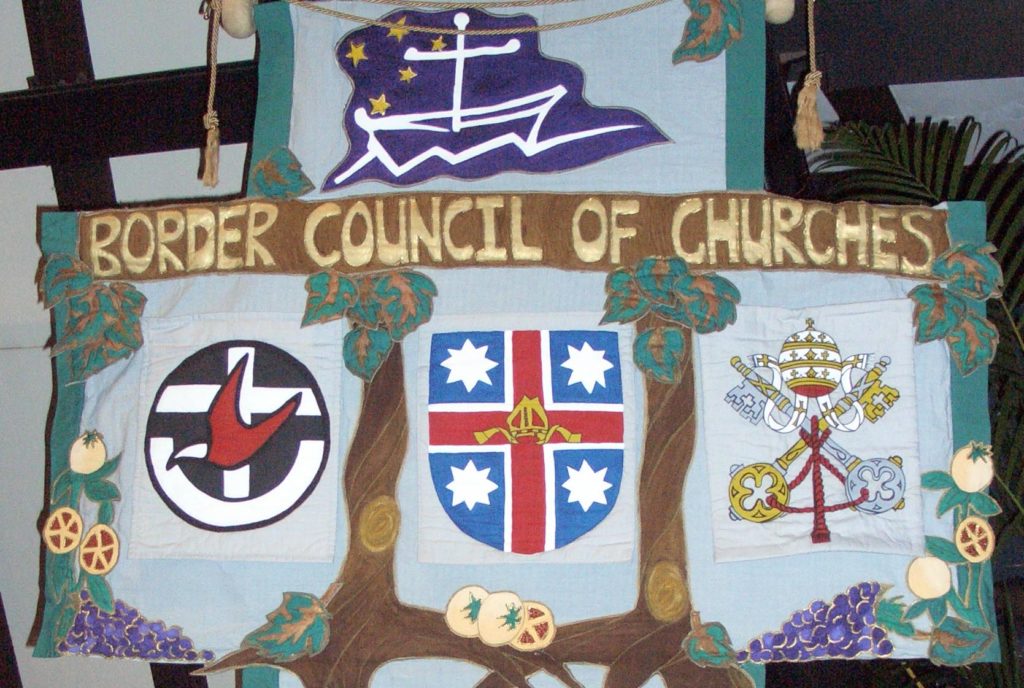 “The banner that was created for the inauguration of the Border Council Of Churches in Tweed Heads/Coolangatta, featuring the Uniting, Anglican and Catholic Churches in 2000”