Eighteen Secondary School students and eight staff got hair shaved, waxed or chopped at Canterbury College recently – all in the name of two great causes.

As a feature event during the College’s Interhouse Athletics Carnival, the male students and staff had either their heads shaved or legs waxed for the World’s Greatest Shave, in support of the Leukemia Foundation, while the female students and staff supported the Queensland Cancer Council by chopping off their long hair in the Ponytail Project.

The students, from Years 8-12, all had very personal reasons for participating, many with close family, neighbours or friends being affected by, even dying, from cancer.

Year 12 students and Ponytail Project leaders Kyarna Bousen and Emily Meek did not hesitate to participate.

“It is only hair, it will grow back. As Social Justice Captain this year I felt it was a great initiative to lead and not much of a sacrifice for us to make at all,” Waterford student Kyarna said.

“I have a family history of cancer, I felt I had to do something,” Boronia Heights student Emily Meek said.

Emmerson Manning from Waterford will miss her very long hair, but for her, finding out a close friend’s mum received a final stage cancer diagnosis recently was her drive to cut her hair.

“I raised almost $1000 by asking my family and neighbours to donate,” the Year 9 student said.

College Captain Christian Almario jumped at the chance to get involved in the World’s Greatest Shave.

“Shaving my head was daunting, but it is nothing to what cancer patients go through,” Eagleby student Christian said.

“We can each of us change the world, one little action at a time,” said Year 11 student Anderson Som, from Jimboomba.

Director of Student Development Mr Chris Nield was the staff coordinator of the event, and he also volunteered to lose his trademark beard for the cause. He said initial discussions with the students saw them decide they would be able to raise $5000-$6000.

“Then we raised the goal to what we thought was a challenging $10,000, and now to have more than $17,000 raised, is just a fantastic outcome for our first major fundraiser event for the school,” Mr Nield said.

The chopped-off ponytails are also not destined for the rubbish bin, with the College donating the hair to make wigs for cancer patients. 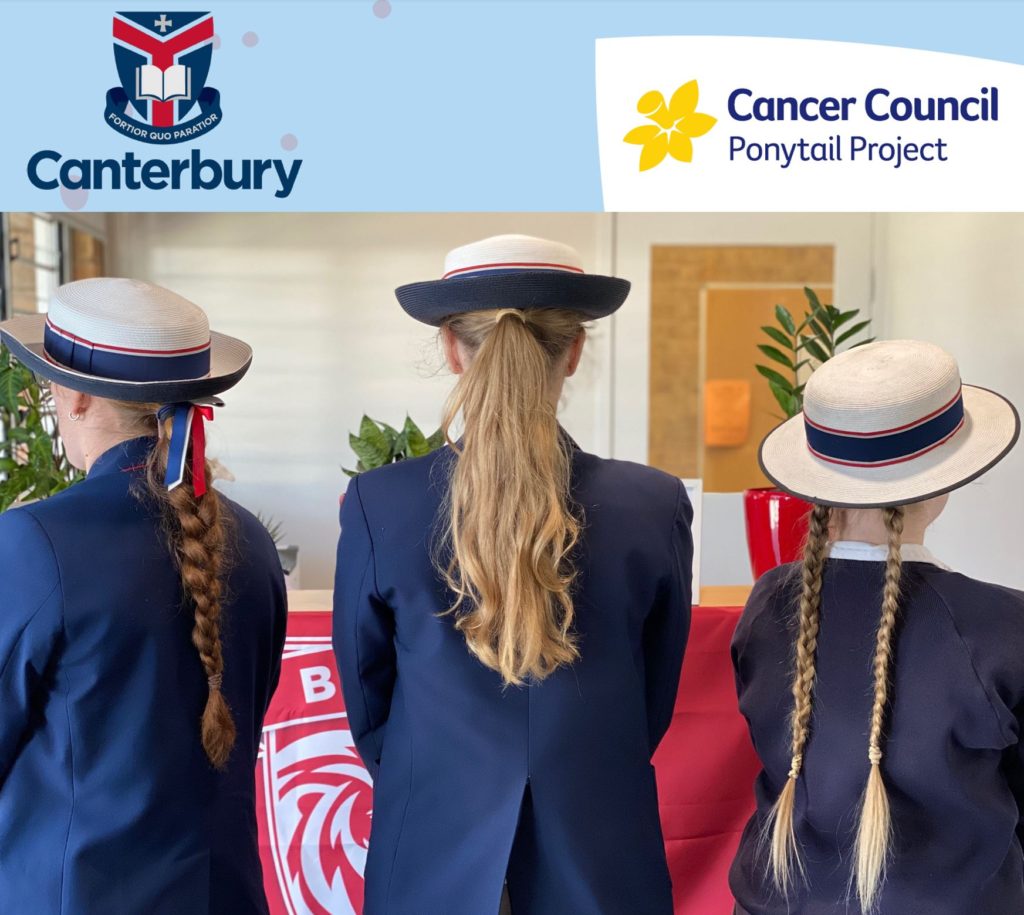 A before pic of (L-R) Kyarna Bousen, Emily Wilson and Emily Meek before they cut their ponytails off as part of the Queensland Cancer Council’s Ponytail Project