Many Queenslanders would be aware of the impact that Frederick Tritton and his furniture company had on businesses and family life throughout Queensland. There would be many homes, hotels and public houses still containing fine examples of the ornate and practical furnishings that F. Tritton produced in factories and sold in various stores – the main one being in George Street in the Brisbane CBD. 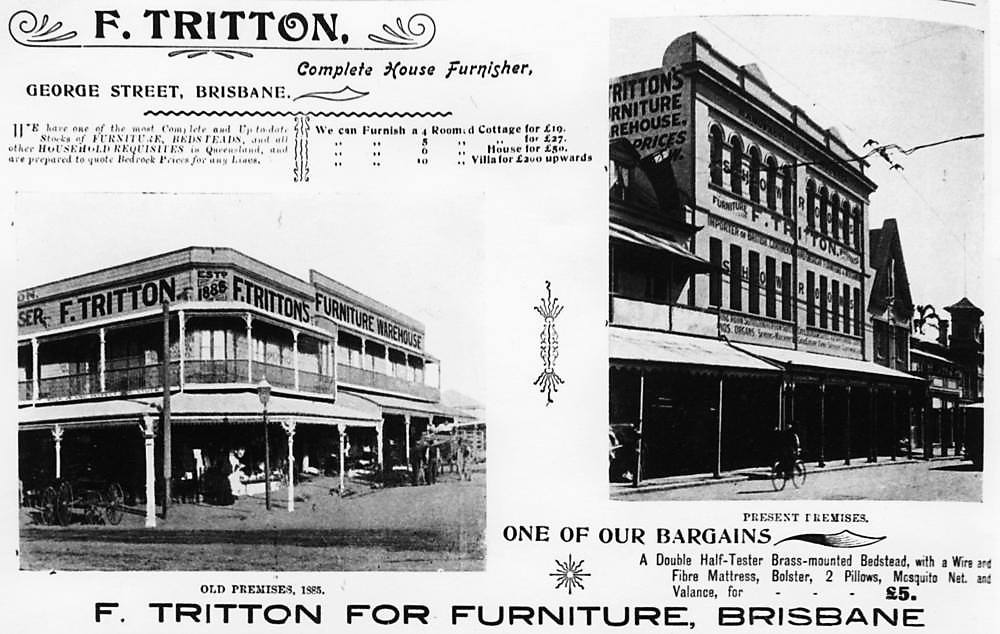 What many people may be unaware of is the impact that Frederick’s wife, Eliza Tritton, had on the life of the Church and on the health and wellbeing of thousands of fellow Queenslanders.

Both Frederick and Eliza were born in the United Kingdom, on Jersey and in Bradford respectively. Frederick travelled to Australia with his parents and three brothers in 1884. He and his brother Charles opened a small furniture business in South Brisbane, having both been involved in the furniture and manufacturing trade in England. Frederick married Eliza Worrell in Holy Trinity Church, Woolloongabba in October 1889, with their eldest child, Charles, born a year later. Prior to the marriage, both brothers decided to dissolve their partnership and set up separate furniture businesses – Frederick eventually securing land and premises in George Street immediately after the 1893 floods. The business prospered and eventually the family moved to Clayfield, where they joined St Colomb’s Anglican Church.

Between 1908 and 1910 Frederick was one of the wardens for St Colomb’s, and during this period he also provided the pews for St John’s Cathedral. Eliza established the parish branch of the Girls’ Friendly Society (GFS) where she encouraged the learning and development of the young members through social events and lending them books from her own library. The indefatigable Eliza regularly organised fetes and dances with the other ladies of St Colomb’s, Clayfield and other members of the GFS, which, according to the GFS Australia Inc website, was formed in Australia “to give maids and domestic staff spiritual guidance and social activities for their days off”, “run hostels” and run “camps and leadership courses.”  Eliza was also the branch president for an undetermined period – as was noted when Frederick and Eliza left Brisbane to go on one of their many overseas trips. 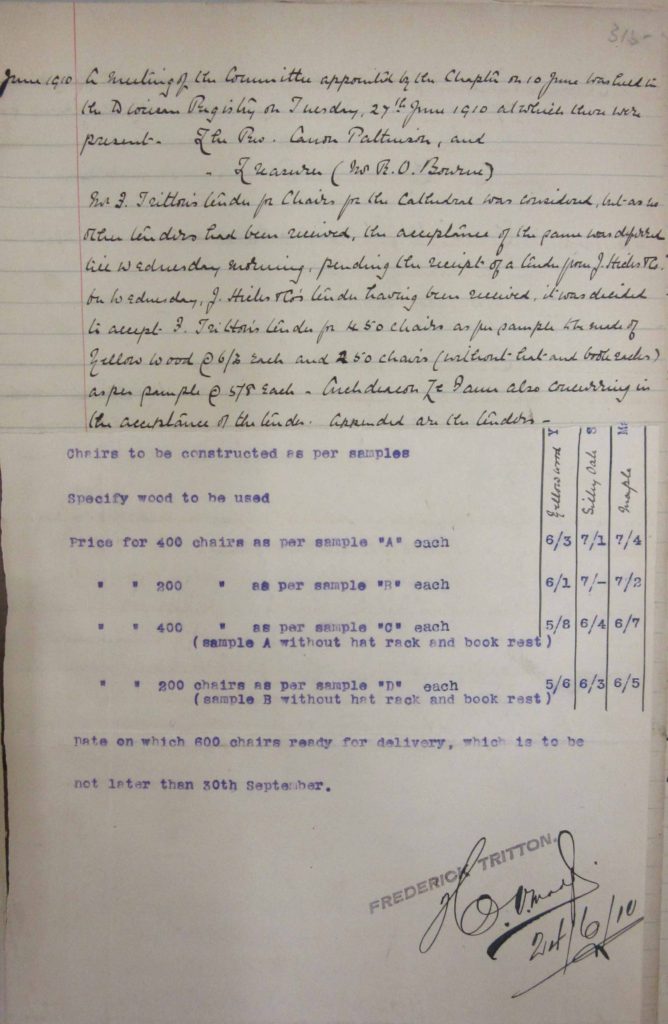 St John’s Cathedral Chapter Minutes of 27 June 1910, noting the acceptance of tender for pews and chairs 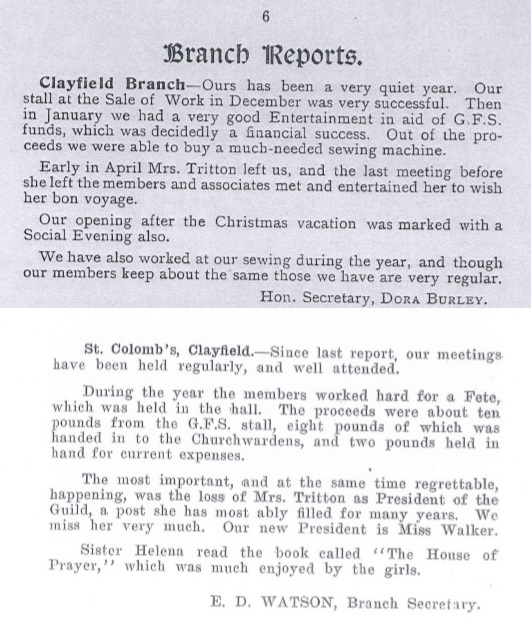 “ ‘A most delightful and instructive tour from every point of view’ was the way in which Mrs. F. Tritton summed up her tour through the United States of America and Canada. ’’Nevertheless’, she added, ‘I am glad to be back again, for although the trip has been wonderful there is no place like Queensland.’ ”

After one trip through Asia in 1934, she curiously noted that in Sourabaya (Java):

“…a drive through the town would indicate that the householders vied with each other in the matter of lamp shades.”

Along with Canon David Garland, Eliza was one of the founding members of the Soldiers’ Help Society in 1916, although Eliza seems to have taken a more behind-the-scenes contribution to the Society, such as fundraising and organising social events. Eliza continued to arrange and promote social events throughout the 1920s and 30s as part of the parish’s activities and with the Brisbane Women’s Club. In 1933 the Brisbane Courier noted that:

“…Mrs Tritton is a supporter of a number of philanthropic movements, and though she is ‘in recess’ from some of the committees to which she belongs she maintains a keen interest in the District Nursing Association, the Clayfield branch of the Country Women’s Association, and the Queen Alexandra and Margaret Mair Homes of all of which she is either an office bearer or a committee member.” It was through the District Nursing Association that Eliza possibly made her greatest contribution. She joined not long after the establishment of the Association in 1910 and made a lasting contribution through fundraising events and committees. Eliza was appointed association president in 1937, serving in this position until 1954.

During her time as president (and with the assistance of the secretary, Maud Olive) the Association saw significant financial improvement and became more independent of the Church, with a new constitution enacted in 1955. Visits to hospitals increased, and each Friday Eliza provided her own car and chauffeur to assist with visits to hospitals and those in need of assistance and care in their own homes.

As noted in Fuelled by Passion: A history of St Luke’s Nursing Service 1904-2004, Eliza “was unsparing in her devotion to the cause, and her palatial home often hosted fundraising events such as fetes and bridge parties.” 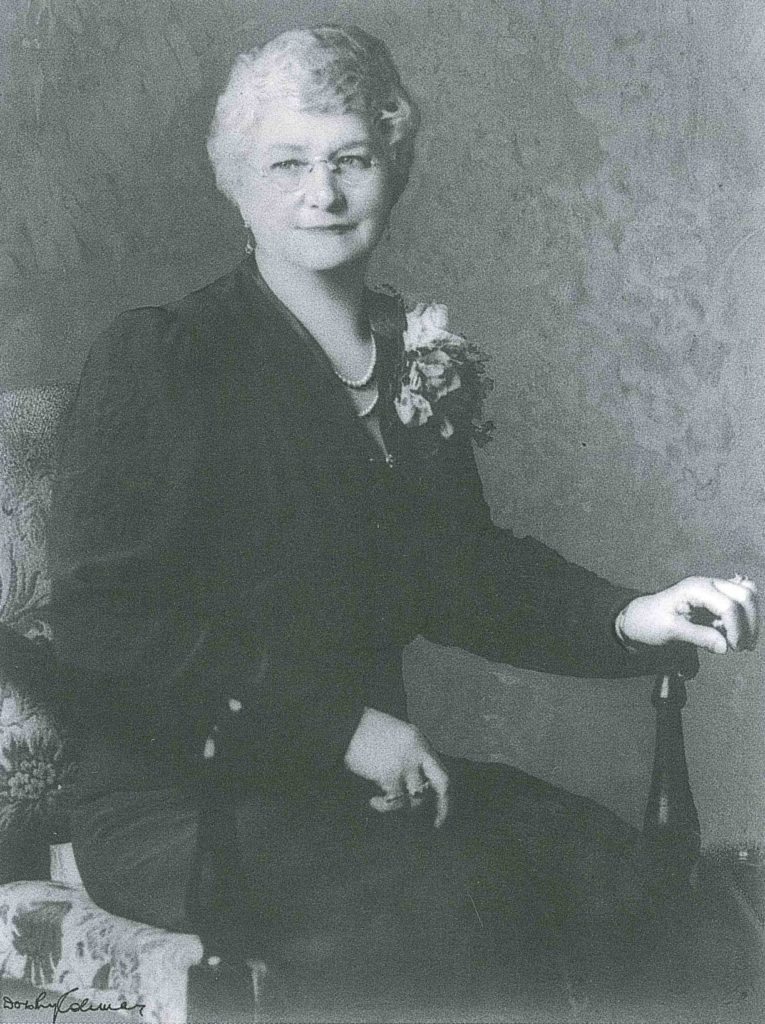 Just after her retirement as president she was presented to the Queen in 1954 during her visit to Brisbane the year following her coronation. Then in 1963 Eliza was awarded an OBE for services to the Church and the community.

On her passing in 1968, the Rector of St Colomb’s, Clayfield, Fr Albert Loxton, noted:

“It is very difficult for me to pay an adequate tribute to the late Mrs Eliza Tritton… [but she] had always been a generous member of the Church…[she] was a very gracious lady who had built up over the years a very noble character. Oh Lord once said that the true test of greatness was that of service – ‘I am among you as He that serveth – and I have given you an example that you should do as I have done to you.’ ”

An unidentified church leader was recorded as saying, “St Colomb’s will never know how much it owes to Mrs Tritton.”

As Father Albert also noted, “Eliza Tritton (in her wonderful service to the church and community) can justly be considered great.” 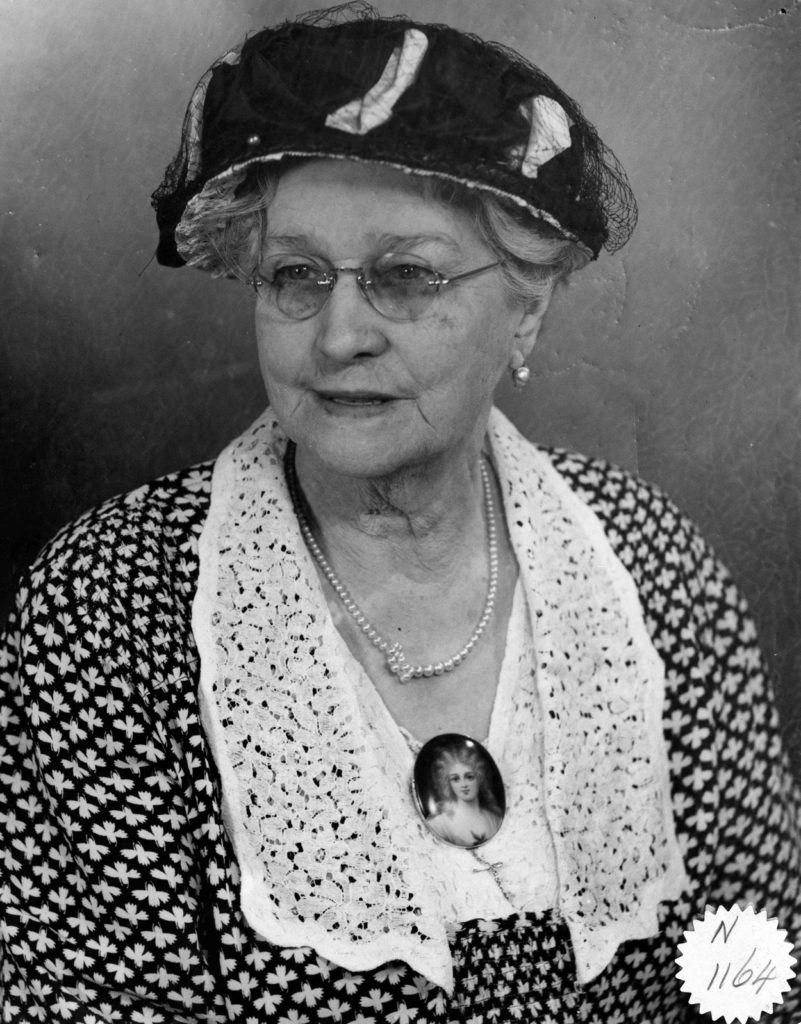