I first met Priya, Nades and toddler Kopika at the Biloela Hospital in 2017. Priya and Nades love being involved in our community, meeting people and attending events and playgroups, including Mainly Music sessions at the Anglican church where I was a Parish Council member. I, like the wider Bilo community, were struck by Priya and Nades’ generosity, kindness and sincerity and how much they adore their girls.

To support Priya, I flew to Perth in June during Tharnicca’s hospitalisation with a blood infection and untreated pneumonia, which she acquired on Christmas Island following poor treatment of her health while in detention. Shocked by this impact of detention on one so young, millions of people across the country rallied behind the family leading to their release from Christmas Island after more than three years of being arbitrarily detained.

While the family is keen to return home to Bilo, at present only three of the four family members are able to do so because only three have been granted Bridging Visas. The government is choosing to keep Tharnicaa in ‘community detention’, which of course cunningly forces the family to remain in Perth, as the parents obviously can’t return to our Bilo community without their youngest child.

Around the time that Tharnicaa was in hospital, 30 Anglican Bishops signed an open letter to the Minister for Immigration Alex Hawke and the Prime Minister Scott Morrison calling for Nades, Priya and their two girls to be returned to Bilo in Queensland:

“As Christian leaders, we echo the call for a compassionate, fair, safe, common sense and permanent solution. We stand in solidarity with this young family seeking peace, safety and stability, and with the Biloela community who are waiting to welcome them back home,” the letter read.

I am writing to thank Bishop Jeremy for coordinating the letter and to all the Bishops who signed it. I found out about the open letter while I was in Perth, and immediately read it out loud to Priya, who was incredibly encouraged and uplifted that so many faith leaders cared about her young family. As a spiritual woman, it means so much to Priya that faith leaders care enough about her family to write to the Prime Minister and Minister for Immigration. It also gives her much relief and comfort knowing that she is in their prayers.

The support and prayers of community leaders and members across the country are not only keeping the family’s hope alive – they also help to bolster people like me who are helping the family day to day.

When I returned home to Bilo from Perth in June, which was an emotional trip leaving me feeling exhausted and deflated, my spirits were buoyed upon seeing a hand-written card from Bishop Jeremy Greaves which he had mailed to me while I was away. I want to thank him for his well-timed card and especially for these words:

Please be assured of my prayers for you in all that you are doing for and on behalf of the Murugappan family. This is incredibly important work…Please let me know if there is more that I can do. All the blessings!

I also wish to thank anglican focus readers and others in the Anglican Church Southern Queensland for their support. As a fellow Anglican in your Province, this really means a lot.

Knowing that there is so much support for this family and that thousands of people around the country are praying for a compassionate and common sense solution reminds me that I am not alone in this fight, which carries me when things get tough.

At the moment, the family’s priority is getting the bar lifted so four-year-old Tharnicaa can lodge a claim for asylum, as is her right. This decision simply requires ministerial discretion on the part of Immigration Minister Alex Hawke. We have a moral obligation to assess the risk of danger to Tharnni if her parents are to be forcibly returned to Sri Lanka where Tamils continue to be abducted, tortured, unlawfully detained and sexually assaulted by Sri Lankan security forces post conflict, as reported by the United Nations.

Thank you to all those people who have contacted their elected representatives calling for this ministerial discretion. Remarkably, this has resulted in six current Coalition Federal elected representatives speaking out publicly on behalf on the family, as well as people like Malcolm Turnbull, Julie Bishop and radio broadcaster Alan Jones.

Every phone call or email helps. At the request of our supporters, we have created webpages to make this easier so people know whom to contact and to provide helpful talking and writing points when they call or email. 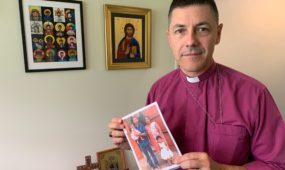 On 22 September, Nades’, Priya’s and Kopika’s Bridging Visas expire and thus consequently face being forced back into detention or deported to harm in Sri Lanka.

Every ‘Home to Bilo’ Facebook post that is shared, every phone call or email to an elected representative, every prayer that is prayed and every community conversation over coffee about this family help to keep them here and safe.

Editor’s note: You can read the open letter that was initiated by Bishop Jeremy and signed by more than two dozen Anglican Bishops on anglican focus.