In June 2009 I began work at St John’s Cathedral as Guide Coordinator. Being involved in sharing the Cathedral with visitors brought with it a vastly increased appreciation for the Cathedral, as well as its architecture and contents.

Whilst the stained-glass window collection seems to loudly chorus “Look at me!” to the visitor, the pews with their display of cushions could better be described as whispering “When you have a moment, look at us…”

I was not initially drawn to the array of cushions, as I felt they were lost amongst the carvings, military banners and sheer drama of the neo-Gothic architecture. Several of the more dramatic cushion sets drew the eye, but not until I took over the task of choosing cushions for the monthly display 10 years later did I truly began to appreciate the enormity of the scope of ‘The Tapestry Project’ undertaken by the volunteers who created and coordinated the initiative across the 1980s.

“I think my favourite cushion is probably the six-piece set named ‘Seascape’. It depicts the horizon over the sea, which brings back so many memories of family holidays just sitting on the beach looking out to sea. Designed by students from Seven Hills Art College and donated by the combined Toowoomba parishes it encapsulates memories of happy and relaxing times, which I appreciate especially in the time of COVID-19” (Jacki Scott)

The idea for the cushions was practical – the pews were uncomfortable to sit on! The solution gave a unique opportunity for parish and public participation, in both the design and stitching processes.

After a number of years’ consideration, the Cathedral decided to remove the pews and replace them with chairs. The reasons for this were twofold: the pews were beginning to show signs of significant deterioration and they were becoming a health and safety issue for the vergers whose responsibility it was to move the heavy timber pieces around to suit the growing number and diversity of events the Cathedral was hosting.

From 2014, the pews were replaced by chairs and the cushions were gathered up and moved into temporary storage in St Martin’s House on the Cathedral Precinct, where it was obvious that not only did they require repair and cleaning after having been sat on for 30 years, but also that their conservation and future preservation would become vital. 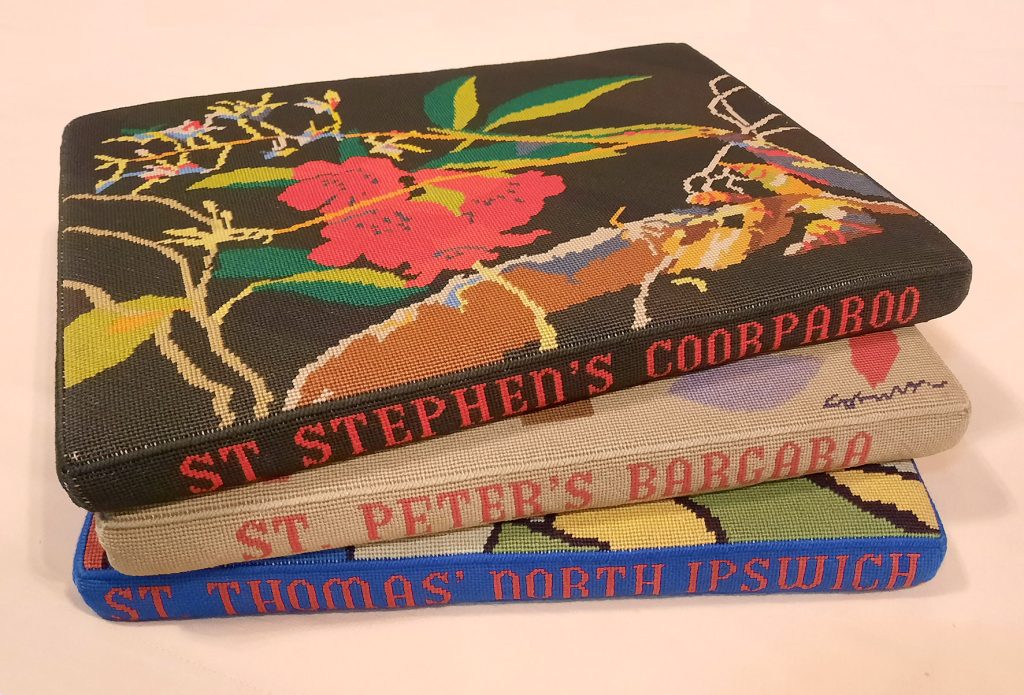 “There would be a likely mutiny if I admitted to having a favourite cushion — each one tells a unique story and is exquisitely crafted. I would like to thank the Cathedral community members who donated approximately $20,000 to make the stunning STITCHES IN TIME book possible. The generous couple wishes to remain anonymous; however, I would like to take this opportunity to express my sincere appreciation” (The Very Rev’d Dr Peter Catt, Dean of St John’s Cathedral)

When they were returned to the Cathedral they were photographed, documented and placed into appropriate archival boxes for storage – numerous electronic data files collected crucial information about each cushion.

Increasingly, though, repeated calls were being made to bring the cushions out and somehow once again put them on display in the Cathedral for everyone to enjoy. The sheer number of cushions – more than 400 – meant this would be a potentially mammoth venture.

A solution was finally found and the illuminated glass display cabinet next to the northern transept door of the Cathedral was chosen as a suitable option to enable viewing parts of the collection. 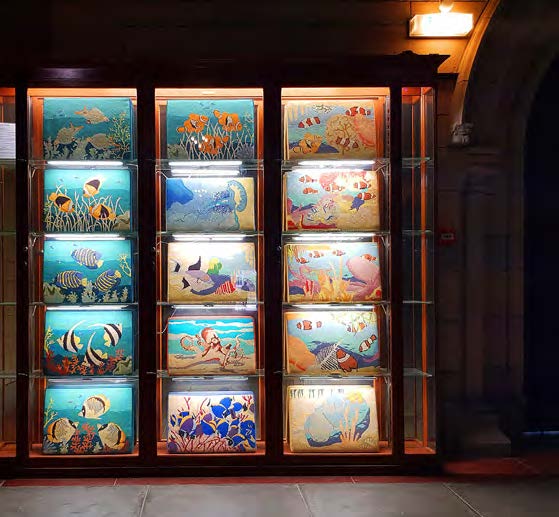 Initially, Mrs Katie Williams undertook this task, each month bringing out 15 cushions to display. Over several years, she cycled through the complete collection.

Since her retirement in April 2019, I have tried to choose cushions with a thematic connection to suit each month, with either religious (e.g. Easter, Christmas) or cultural (e.g. NAIDOC Week, Anzac or Remembrance Days) motifs as my guide. From that point, I began to really understand the beauty and craft exemplified by this lovely collection.

Editor’s note: Adapted with permission from the ‘Introduction’ of STITCHES IN TIME: The Cushions of St John’s Cathedral, Brisbane. This stunning commemorative hard-cover, full-colour book features images and historical information of more than 300 of the 415 locally hand-stitched tapestry cushions.

Join Cathedral Dean The Very Rev’d Dr Peter Catt, book editor Jacki Scott, Cathedral Precinct Manager Gerard Finn and members of the Cathedral community at the launch of STITCHES IN TIME: The Cushions of St John’s Cathedral, Brisbane on Friday 26 November at 6.30pm for a 7pm start at St John’s Cathedral. Wine/Juice and cheese will be served at this free event. 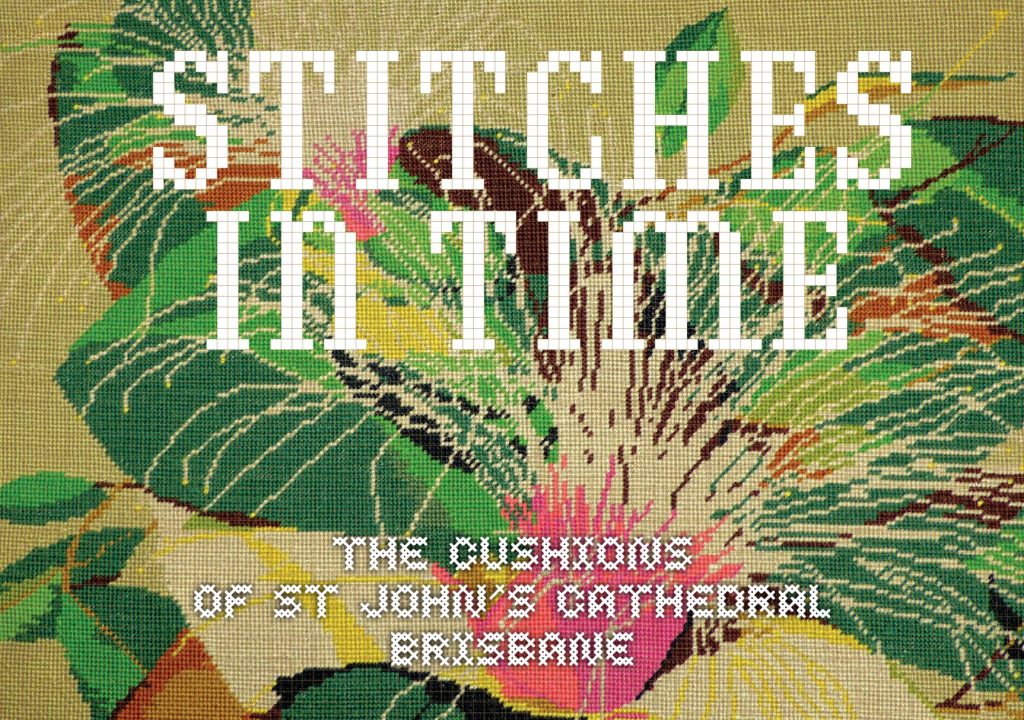 Cover of STITCHES IN TIME: The Cushions of St John’s Cathedral, Brisbane

Page opening to STITCHES IN TIME: The Cushions of St John’s Cathedral, Brisbane