Around 10 years ago­ while serving at The Parish of Waterloo Bay, I met former refugees at a kayaking day organised by SAILS, which is an outreach of Anglican bayside parishes. The 14-year-old lass who was paddling beside me said, “This is the water that took my mum.” She had fled her homeland with her parents as a young child, seeking safety and freedom. It is hard to describe the sadness that I felt at the time. I think of her often and wonder how she has settled into her new home since. This conversation was a turning point for me.

It is easy for us to ignore the reality of what it is like to be a person seeking asylum. The majority of us get on with our lives while thousands of people – all made in the image of God – are stuck in our immigration system, either onshore or offshore, waiting in limbo for a real solution of permanent protection. Even though we share a common humanity, fear of the other has been intentionally used to divide us by elected representatives and much of the mainstream media. As a Christian, loving my neighbour means doing what I can to be in solidarity with them.

Award-winning Kurdish-Iranian journalist Behrouz Boochani is one of the many people who suffered in our offshore processing regime. He was detained in the Manus Regional Processing Centre for more than four years before spending another two years stranded in the offshore processing system on Papua New Guinea. Since late 2019, Boochani has been residing in New Zealand where he has been granted refugee status and is currently employed as a Fellow at the University of Canterbury. His critically acclaimed masterpiece, No Friend But The Mountains: Writing From Manus Prison, written while detained on Manus, broke my heart. There, people seeking asylum were routinely called by their ID number, rather than by name. The physical hardship, humiliation and psychological trauma they endured led him to cry out, “Oh God, do something, take us to a nice place.”

I believe we are Jesus’ hands and feet, and that we can all do something to help our brothers and sisters seeking safety. After much prayer and in consultation with my health professionals, I have decided to keep a nine-day fast as a lament for the nine years of suffering experienced by people caught up in our offshore processing system. The nine-day fast will take place on the steps of St John’s Cathedral starting late on Saturday 3 September and continuing until Monday 12 September.

I will keep the fast conscious that many refugees and people seeking asylum still live in limbo with no permanent solution. My hope and prayer are that we as a community, along with our elected representatives, will urgently seek a real and lasting solution for the 1,380 people still stuck in our offshore processing system.

I will be praying for Christ-like compassion to be shown to the people who are simply looking for a place to rebuild their lives in peace and safety. We have acted humanely toward people seeking asylum before, and we can do it again. 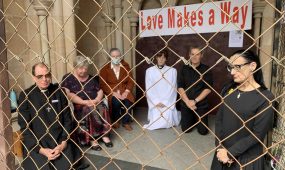 As part of the fast, I will also be asking supporters to sign a petition addressed to the Minister for Immigration, Andrew Giles, to grant Permanent Protection Visas as quickly as possible for the 19,000 refugees in limbo onshore who are on recurring three-year Temporary Protection Visas or five-year Safe Haven Enterprise Visas. They have a right to be able to rebuild their lives in stability and freedom.

I will also be calling for the Refugee and Humanitarian Program to be progressively expanded to 27,000 places per year and for the building of a community sponsorship program of 5,000 places, which the Australian Churches Refugee Taskforce is working on.

Australia continues to be enriched by the nearly 900,000 refugees who have integrated into our communities over the past 75 years. Let us continue to support policies that humanise people seeking asylum. As Christ welcomes us, let us welcome refugees so they can help us to build the vibrant and thriving multi-cultural community we hope to be.

Here are simple ways you can support my nine-day fast at the Cathedral: