The Rev’d Nicholas Whereat has commenced a nine-day Cathedral fast to pray for the more than 1,300 refugees left in limbo in the offshore processing system, and is inviting community members to join him.

During his nine-day “Hunger for Hope” vigil, Parish of Aspley-Albany Creek rector, The Rev’d Nicholas Whereat, will only be consuming tea, coffee, water and electrolyte drinks, while in the confines of a cage-like enclosure outside the front of St John’s Cathedral.

The Rev’d Nicholas said that he is calling for our nation’s leaders to implement a humane and common sense solution for the refugees who have been stuck on Papua New Guinea and on Nauru for nine years.

“This isn’t a hunger strike where I keep going until there is a specific outcome — it is prayer and fasting for nine days to help remind the nation that people have been stuck in limbo in the offshore processing system for over nine years on PNG and Nauru,” The Rev’d Nicholas said.

“I am also praying and fasting that the hearts of stone in our elected representatives, across different political parties, become hearts of compassion.

“One of the stories that shocked me when reading award-winning No Friend But The Mountains: Writing From Manus Prison, by former refugee detainee Behrouz Boochani, was that of a man detained on Manus who was unable to make a phone call to his dying father because it wasn’t his rostered day to make a call.

“By the time he called his father, it was too late.

“Successive governments have created a hideous mess with the inhumane policy of ‘warehousing’ people offshore, with people suffering needlessly as a result.

“They need to address the mess they have created by treating these people in a way that they would want to see their own family members treated.

“It is within their power to solve the problem they have created.

“After being detained on Manus for four years, before spending another two years stranded in the offshore processing system in Papua New Guinea, Kurdish-Iranian journalist Behrouz Boochani has been granted refugee status and is currently employed as a Fellow at the University of Canterbury.

“Boochani fled Iran in 2013 after 11 of his journalism colleagues were arrested by government authorities.

“He is now rebuilding his life in freedom, which shows that humane and common sense solutions are possible.

“I don’t think most people here know how safe and free it is here compared to much of the world.

“You don’t have to go far to realise that many nations don’t have the safety that we take for granted.

“People flee their homeland because they are frightened.

“On the whole our politicians are dedicated, yet their fear often inhibits them from implementing meaningful change, including for these vulnerable people.

“I am inviting community members to drop by the Cathedral to join me in prayer or for a conversation, as well as to attend a community vigil we are holding at St John’s Cathedral on the evening of Wednesday 7 September from 7pm.” 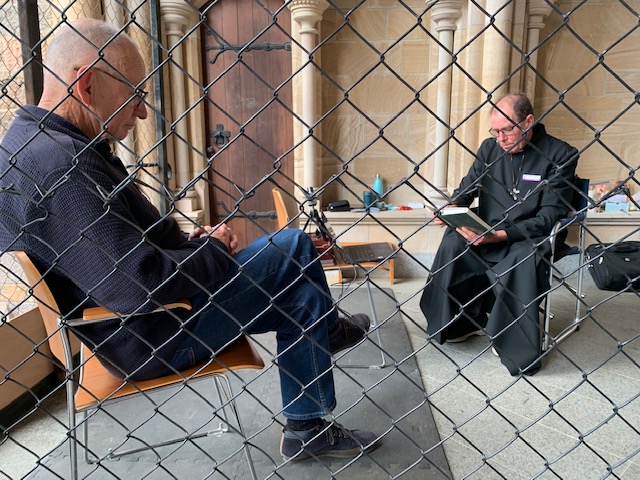 Since the end of World War II, Australia has welcomed nearly 900,000 displaced people who have rebuilt their lives and enriched our communities.

This is the largest number of non-British migrants in that timeframe in the history of our country’s migration.

The Rev’d Nicholas said that he is also fasting and praying for the people living onshore who have been given refugee status, but only temporary visas.

“I am also praying for the people here who are living in limbo in our capital cities and regions who are on temporary visas, including three-year Temporary Protection Visas and five-year Safe Haven Enterprise Visas,” he said.

“Safety and stability are the priorities for these people, so they can rebuild their lives in peace.

The Rev’d Nicholas is calling for people to sign a petition addressed to the Minister for Immigration, Andrew Giles, to promptly grant Permanent Protection Visas for the 19,000 refugees in limbo onshore.

He is also calling for the Refugee and Humanitarian Program to be progressively expanded to 27,000 places per year and for the building of a community sponsorship program of 5,000 places, which the Australian Churches Refugee Taskforce is working on.

“I will be assisting Nicholas pastorally with lots of prayer, popping past as frequently as I can to check in and see how he is going and ensuring that Communion is taken to him when a service is happening in the Cathedral,” The Rev’d Dr Gemma said. 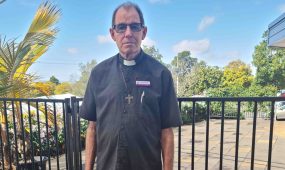 A hunger for hope: nine-day fast for refugees

“Nicholas and I are both Third Order Franciscans, so we pray for each other regularly.

“I have been sent messages of support from the Franciscan community throughout the Asia-Pacific, which I will give him throughout his nine days of fasting.

“From a medical perspective, I’m not his formal doctor, but I will be keeping an eye on things.”

Dr Gemma said that it is important for wider community members to support The Rev’d Nicholas during his Cathedral fast.

“Until you physically see what Nick is doing, I don’t think you truly appreciate what is involved,” she said.

“It’s actually very hard to watch someone sit in a confined space – let alone fast for nine days – because the instinct is to want to help them.

“There has been a very supportive response to Nick’s vigil, and he is highly admired for what he is doing.”