Over a period of six months in 2018, I worked as a community organiser in the refugee rights space. Community organising is the practice of listening to, mobilising and equipping volunteers with shared concerns and goals to create effective social change. Part of my role involved facilitating workshops for Queenslanders who wanted to see refugees being given a fairer go by teaching participants advocacy communication skills. From these workshops, I recruited 15 delegations of Queenslanders to meet with Federal elected representatives in calling for three specific policy reforms.

Organising constituents, such as members of a congregation or ministry, to lobby their elected representative can be a highly effective advocacy strategy. In order for community organising endeavours to be successful, a strategic, persistent, flexible and patient approach is needed.

The 15 delegations I organised were groups of inter-faith people, groups of medical professionals and groups of educators, with a former refugee also invited to join each delegation. I organised the groups in this way, rather than forming ad hoc delegations, because these people are trusted in the community and offer particular expertise and relevance in refugee rights conversations.

A number of local Anglicans joined these various delegations, who met with Labor representatives for strategic reasons. Some of these Anglicans included people who felt compelled to help, but preferred the option of speaking with their Member of Parliament or a Queensland Senator in a coordinated group, rather than attending protests or marches.

After using power mapping to decide which elected representatives the delegations would meet with, I set about forming and preparing the delegations. This included facilitating introductions between group members, answering questions and helping them with:

One of the three key policy reform “asks” of the delegations was about securing permanent protection for refugees on temporary visas.

At the time the delegations were formed, Labor’s National Platform stated that people on three-year Temporary Protection Visas (TPVs) would be granted Permanent Protection Visas if/when the Labor Party formed government. The TPV is one of two types of temporary protection visas available to those who arrive by boat to claim asylum and are given refugee status.

The five-year Safe Haven Enterprise Visa (SHEV) is the other temporary visa type for those given refugee status. Unlike people on TPVs, people on SHEVs are required to seek work or study in a regional area – this is the main difference between the two visa types.

Both visas were introduced as deterrents – by deliberately keeping vulnerable people in a state of perpetual limbo. This lack of stability is having severe mental health impacts, impedes people’s ability to secure employment (including in regional areas) and further their education, and is preventing people from rebuilding their lives.

Unlike TPV holders, the Labor National Platform in early 2018 did not state that those holding SHEVs would be granted the stability and assurance of safety that a Permanent Protection Visa provides. With 13,000 people granted SHEVs since 2014, this left many people at risk.

So one of the “asks” of the delegations I organised was for Labor’s National Platform to be amended so that those on SHEVs would also be granted Permanent Protection Visas in the case Labor formed government. 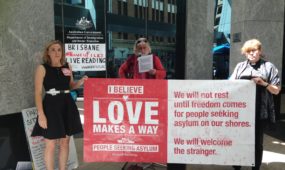 These 15 Queensland delegations, along with approximately 10 others organised in other parts of the country, played a significant role in shifting Labor’s National Platform regarding SHEV holders.

And, in an exciting development, earlier this month the Minister for Immigration Andrew Giles committed to transitioning those holding both TPVs and SHEVs to permanent protection.

So thank you to all those who joined these highly effective delegations, including a number of local Anglicans – your willingness to speak up for vulnerable people and against racism has made all the difference for 13,000 people.

Many people who participated in the workshops and/or joined the delegations often named racism as the underlying problem of successive governments’ punitive policies. Participants often commented that if people coming here seeking safety were “white” they would not face the same barriers that successive governments had legislated.

Committed to ending racism and fostering peace, these good folk put their moral courage, generous hearts and newly acquired advocacy and lobbying skills to effective use. Their efforts have contributed to a number of significant government decisions, including all refugee children being evacuated from Nauru to Australia by late 2018 and, more recently, Andrew Giles’ welcome announcement for SHEV holders.

First published on the faithful + effective website on 16 September 2022.