The great American hymn Mine eyes have seen the glory of the coming of the Lord, with words and music borne out of the struggle against slavery in the US in the middle of the nineteenth century, is also suitable for Advent with words which speak of the coming of Christ.

The author, Julia Ward Howe, was a poet and social worker who attempted to organise a worldwide campaign among women to end war and preparations for war, and in her church preached for the cause of abolition.

According to her account, this hymn was written after she and her husband and several friends, including their pastor James Freeman Clark, had visited the Union troops on review near Washington, DC. On their return to the city, they were caught in the congestion of troops, horses and battlewagons that were counterattacking the Southern forces. To spend the time, her group began to sing favourite war choruses, among them John Brown’s Body, about the militant abolitionist folk hero who was court martialled and hanged in 1859, including stanzas such as “We will hang Jeff Davis to a sour apple tree.” The tune they sang was called John Brown’s Tune.

Upon her return to Boston, the author shared the poem with James T. Fields, editor of the Atlantic Monthly, who added the title Battle Hymn of the Republic and published it in five stanzas on the front page of the February 1862 issue.

The hymn entered American hymnals in 1921. Its inclusion in some hymnals was met with opposition from some in the American South where tradition teaches that General Sherman’s army sang it as they razed Atlanta and pressed on to the Atlantic coast. 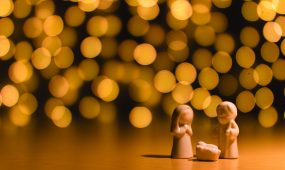 The tune John Brown’s Body in its rhythm and its simple repetitive structure resembles the ‘work songs’ or plantation airs invented by African-American workers engaged in monotonous labour such as cotton­picking, and is very probably one of them.

Howe’s words were first printed to the music as Glory, Hallelujah, and later appeared with the music in hymnals for the army. In January 1865, it was sung in the presence of President Lincoln, who loved the song and on the second occasion joined in the chorus.

The hymn has been associated with various nationalistic and political causes, including women’s suffrage, temperance, two world wars, the Vietnam War, the 1960’s USA civil rights movement and political gatherings at every level.

The people that walked in darkness have seen a great light: they that dwell in the land of the shadow of death, upon them hath the light shined. For unto us a child is born, unto us a son is given: and the government shall be upon his shoulder: and his name shall be called wonderful Counselor, mighty God, the everlasting Father, Prince of Peace.