Our theme for 2019 is ‘Generous Hospitality’

The word ‘hospitality’ is related to two other words that have the same first three letters ‘hos’ – ‘host’ and hosts’.

Let me start with ‘hosts’.

If you’ve been to church you’ve probably heard the words ‘Holy, holy, holy Lord, God of power and might’.

In older services it was ‘Holy, holy, holy, Lord God of hosts’.

‘Hosts’ has been replaced with ‘power and might’ and that gives you the clue about what it means.

Whether you’re talking about the ‘heavenly hosts’ or ‘the hosts of God’ on earth, the word really means ‘armies’. Hosts are the heavenly or earthly armies under God’s command who go into battle against God’s enemies.

Now, can you imagine yourself three thousand years ago as one of the ancient people of God, travelling through the desert, looking for food and water for your family and your animals.

There weren’t hotels and supermarkets to rely on. When you came to a place where there was water and food you relied on the people there treating you well, offering you and your animals something to eat and drink.  Your life absolutely depended on it.

In those ancient days hospitality was given more out of fear and for protection than from generosity. Everyone’s life depended on it.

And because everyone’s life depended on strangers in the same way, a culture developed around the fundamental importance of providing shelter, food and water, and protection for strangers who came your way. And of course you had the right to expect the same treatment from others. 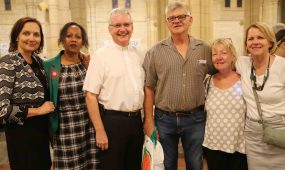 And what’s most fascinating of all about this desert culture is that these unwritten rules applied even if the person who came along was actually your enemy. That’s right, even your enemy had to be provided with food and water for his animals, a sumptuous feast and protection for three days and thirty six hours after eating with you.

Now notice how these three ideas of hosts, host and hospitality interact.

Being a true host and offering true hospitality meant a lot more than entertaining your friends. It actually meant turning strangers into honoured guests. It could even mean treating enemies as friends.

Hospitality involved reaching across all sorts of divisions, even the deepest, most bitter differences and barriers and honouring an enemy as a guest.

Today we tend to think of hospitality as having afternoon tea and cucumber sandwiches with your friends. But the ancient idea is much more powerful than a dinner party or a beer in the pub with people you know and like. It’s a quite radical, subversive idea that’s about turning enemies into friends.

When you stop and think about it that’s how God treats us. In all sorts of ways, we ignore or refuse to do what God wants us to do. We make ourselves God’s enemies, as it were. But God won’t have that. God is the ultimate host who reaches out to us, across whatever barriers we put up, to make us friends. He does that in the person of Jesus Christ.