Many people may be forgiven for thinking that, at the age of 67, Louisa Toogood was entitled to relax. Certainly, there were some who mistakenly thought that her most productive years were behind her. Yet it was at this age that Louisa Toogood acted on a calling she had felt deep within her for a long time as a member of the Cathedral congregation, a calling that led to her creating a charitable organisation that exists to this day, her being awarded an MBE, and the streets of Brisbane proclaiming their love for ‘Mumma Louisa’ and her Ecumenical Coffee Brigade. 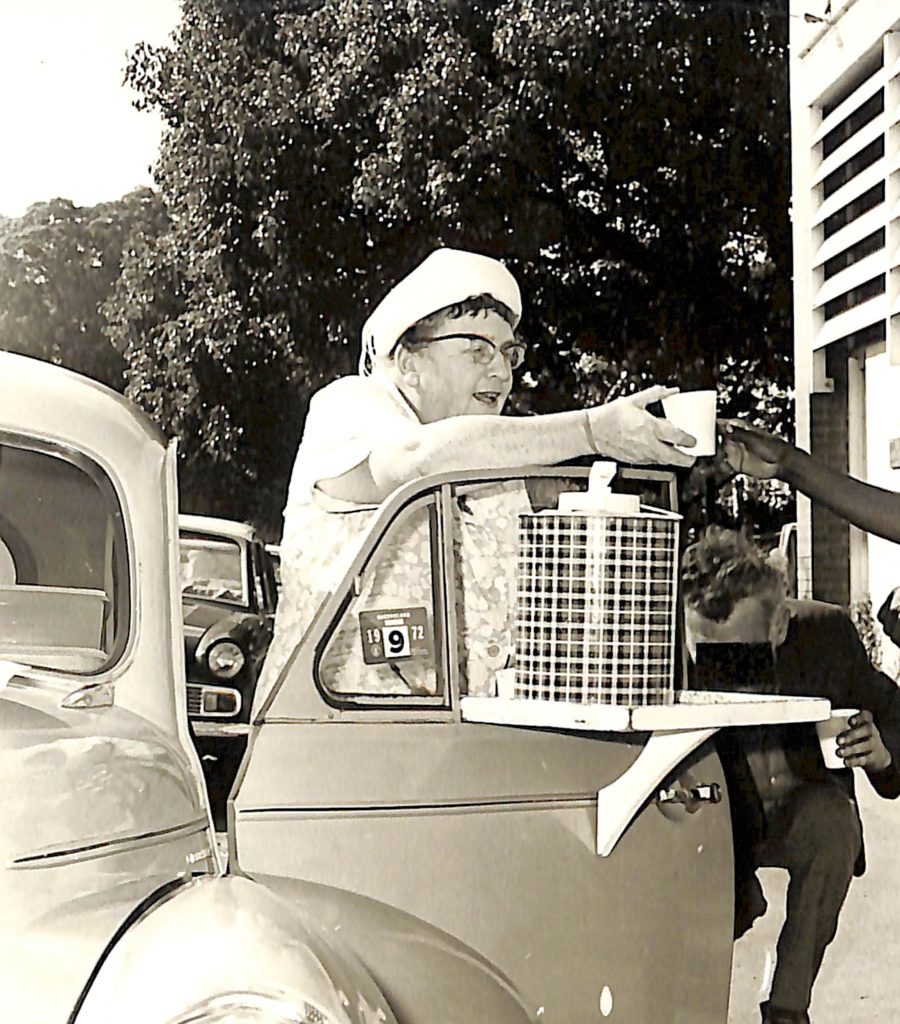 Louisa Toogood was born in 1903 in London and at 19 years of age became a postulant in the Anglican order of the Community of the Sacred Passion, spending some time in East Africa. She left in her 30s and eventually, after serving in the United Kingdom’s Women’s Royal Naval Service during the Second World War and in various capacities within the Church of England, found her way to Australia, and settled in Brisbane in the mid-1950s. She soon became a fixture at the Cathedral, attending 7 am Mass daily. Indeed, it was her early morning attendances that alerted Louisa to the plight of people who were homeless on the streets of Brisbane. She knew she wanted to help, and slowly began taking coffee and biscuits to people in city parks. Finally, in October 1970, Louisa Toogood decided to answer the ongoing call she was feeling in a more robust manner. With the support of the Cathedral congregation, at the age of 67, she began driving her 1954 Morris Minor around the streets of Brisbane in the early morning, handing out coffee and refreshments to as many as she could, always finishing in time to attend the 7 am Mass.

Very soon, volunteers from not only the Cathedral congregation, but people from other Anglican parishes and other denominations began to help. The ‘St John’s Coffee Brigade’ began to receive donations of food and money, and at dawn every day helpers prepared coffee and sandwiches. She became known by the locals as ‘Mum’ or ‘Mumma Louisa’, and between 4.30 am and 6.45 am, she dispensed coffee at established stops throughout the city, using a shelf attached to the door of her car, while her assistant handed out food. Her work did not stop there, however. She was known to drive people out to the Brookfield Friary so that the Brothers could assist them, she found clothes for those who needed them, and even attended the Brisbane City Watch House to minister to those who had found their way there overnight, usually due to the effects of alcohol.

Recipients enjoying their coffee at the makeshift shelf Mumma Louisa attached to her car, 1972 (Courtesy of the Records and Archives Centre, ACSQ)

As the Coffee Brigade grew in popularity and effectiveness, Louisa Toogood received a tremendous amount of help from other denominations around Brisbane. In a letter to the former Archbishop of Brisbane, Philip Strong, who was a great supporter of hers even in retirement down in Wangaratta, she speaks of the ecumenical side of the Brigade as being “delightful”, and remarks that many of her helpers, including Catholic priests, Methodists, Baptists, and Church of Christ members, all attended the daily Mass with her at her morning round’s end. The letter also shows how appreciative she was of the Cathedral Dean, The Very Rev’d Ian George, who “put a woman in the pulpit” and said that she “reminded folk that JESUS used both men and women to take His message.” By 1972 the Brigade was known as the ‘St John’s Ecumenical Coffee Brigade’ and then, a few years later, simply the ‘Ecumenical Coffee Brigade’, or ‘ECB’.

This December 1973 letter to Archbishop Philip Strong was one of many between Mumma Louisa and the former Archbishop of Brisbane, who was an avid supporter (Courtesy of the Records and Archives Centre, ACSQ)

The organisation quickly went from strength to strength, with 150 helpers eventually rostered to prepare food and drink, and the recipients of the Coffee Brigade’s work numbering into the hundreds each day. In 1972 the Church of England Men’s Society (CEMS), donated enough money for a van, which was subsequently blessed at the Cathedral. In 1974 Mumma Louisa was awarded an MBE for her work, which she received humbly, and as an acknowledgment for the Brigade more than for herself. This selflessness was evident again in 1977 when she gave up effective control of the organisation she had created. By handing over the running to an interfaith committee, she was able to secure some much-needed government funding. She remained as Life President and continued to visit the people she had become so close to, whether on the streets, in jail, or in hospital. She also remained a devoted church-goer, penning her own hymn, along with sheet music, to be used during the communion services she loved so well. 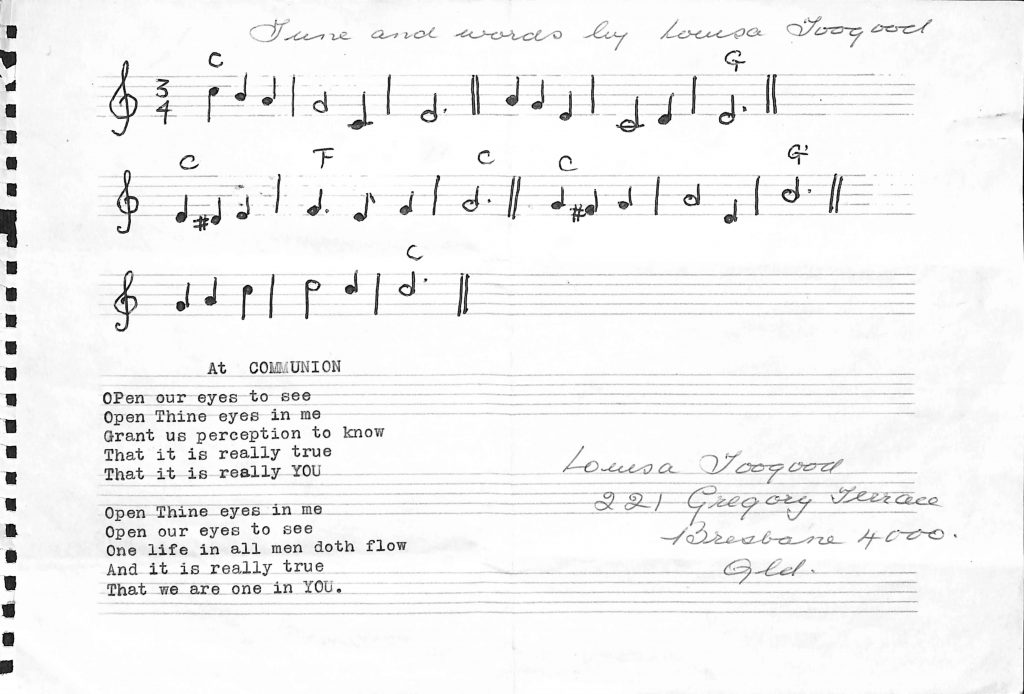 A hand-written hymn left to the Diocesan Archives by Louisa Toogood (Courtesy of the Records and Archives Centre, ACSQ)

Louisa Toogood died in January 1993. A memorial service was held for her at the Cathedral and she was laid to rest at the St Matthew’s Anglican Church cemetery at Grovely. The Ecumenical Coffee Brigade still exists, with its headquarters still in Spring Hill, as it was during Louisa’s time. On their website they pay tribute to her as their founder with her own words:

“We are committed to ensuring that every day of the year the ECB van goes out onto the streets of Brisbane to serve food and drink and offer a welcoming presence. We seek to offer those we meet respect and acceptance by treating all with dignity. We look for new ways of ensuring that the needs of the people we serve are respected and responded to whenever possible.” Louisa Toogood

Next year will be 50 years since the establishment of the Ecumenical Coffee Brigade and the physical manifestation of the call that Louisa Toogood felt as she walked to morning Mass at the Cathedral all those years ago. Her work is still going on to this day, and serves as a fitting tribute to a devoted, kind and innovative woman. 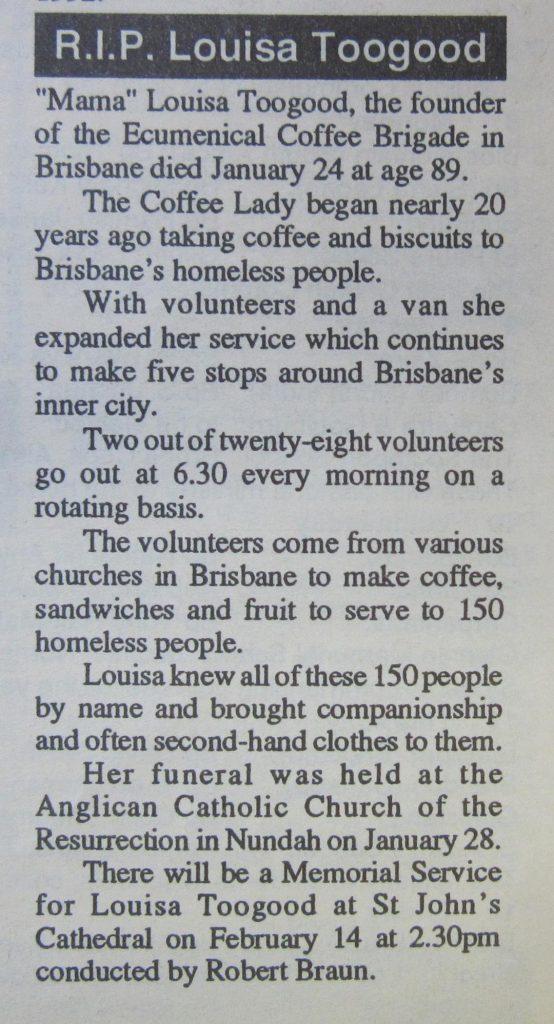 Notice of Louisa’s Toogood’s death in the February 1993 issue of Focus (Courtesy of the Records and Archives Centre, ACSQ) 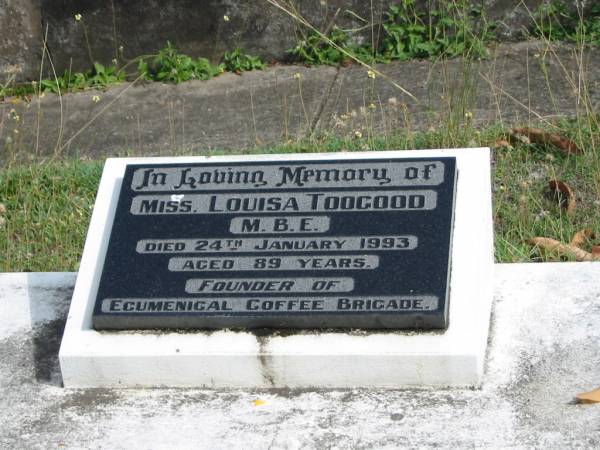