The revered Anglican clergyperson Canon David John Garland, the man often referred to as the ‘architect of Anzac Day’, was memorialised recently with the renaming of a commuter overpass and the visit to Brisbane of his grand-nephew with a very special relic.

Last week marked the 80th anniversary of the death of Canon Garland who spent the last 40 years of his richly lived and extraordinary life in Queensland. His most notable contribution was as a senior army chaplain, experiencing World War I both at home and abroad and his subsequent role in the first Anzac Day Committee, which sparked a century-old tradition – the creation of a special day to commemorate our servicemen and women on 25 April every year.

Canon Garland was laid to rest in Toowong Cemetery on 10 October 1939 alongside his beloved wife, Mary Garland, who had passed away in 1933.

The commuter overpass, renamed the Canon Garland Overpass, was opened in 2009 and physically links Toowong’s sprawling Anzac Park and adjacent Brisbane Botanic Gardens at Mt Coot-tha to the Western Freeway Bikeway – an important artery which also connects the city to the western suburbs via the Bicentennial Bikeway, along Coronation Drive. 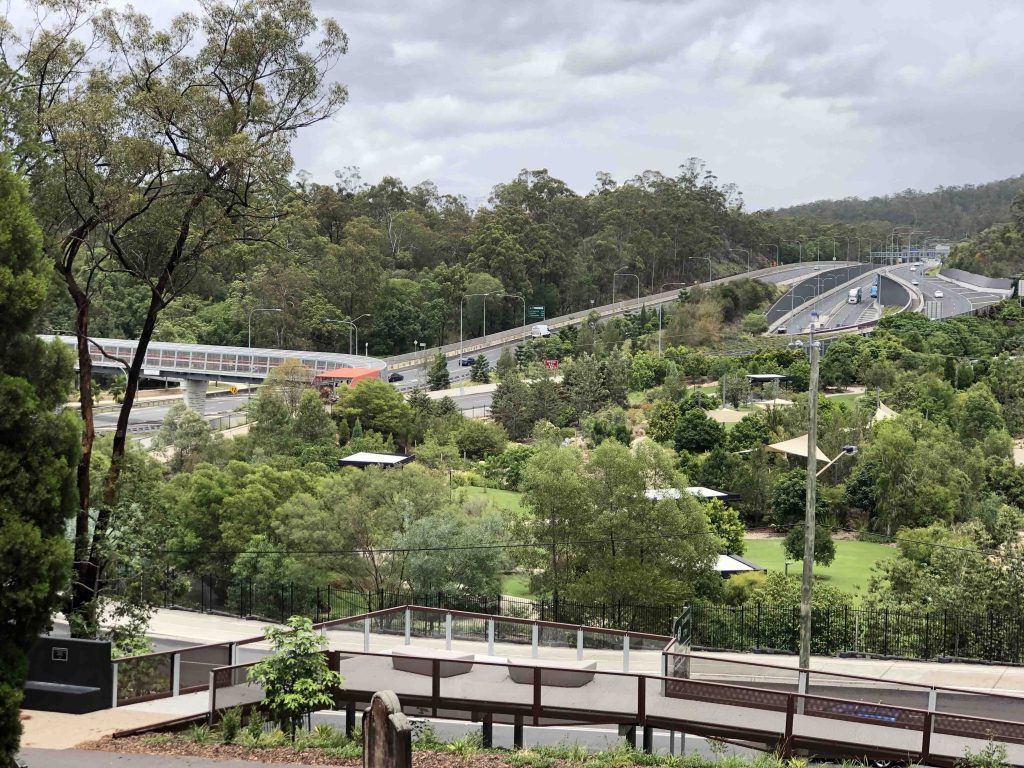 An elevated view of the Canon Garland Overpass

Last week’s ceremony and unveiling of a plaque (provided by the Queensland Department of Transport and Main Roads) was officiated by Ms Jessica Pugh, ALP Member for Mount Ommaney, who was deputising for the Queensland Transport Minister.

Archdeacon to the Australian Army, Padre, The Ven Robert Sutherland CSC (who is based in Canberra) offered a prayer in memory of the life and work of Canon Garland.

The event was especially significant with the attendance of Canon Garland’s grand-nephew David Ratcliff and his daughter, Mrs Elizabeth (‘Liz’) Binks who both flew from their homes in Hexham, England for their first Australian visit. 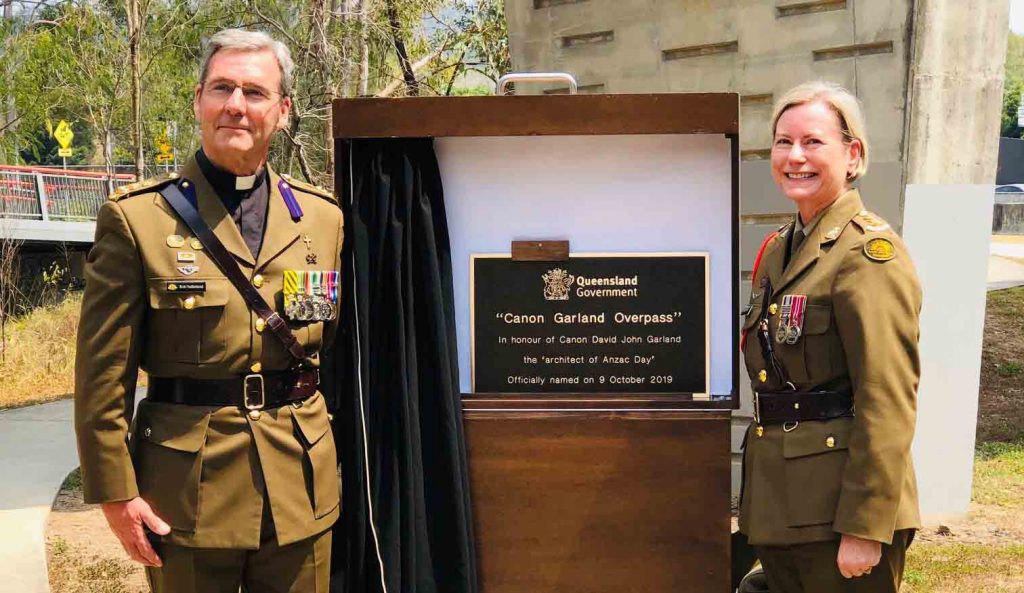 Archdeacon to the Australian Army, Padre, the Ven. Robert Sutherland CSC (left) offered a prayer in memory of the life and works of Canon Garland

Mr Ratcliff also brought with him Canon Garland’s ‘Pectoral Cross’, which was bequeathed to him by his father (Canon Garland’s nephew) who had been custodian of the cross since 1939.

Earlier in the week, David Ratcliff met with the Archbishop, The Most Rev’d Dr Phillip Aspinall at St Martin’s House. The Archbishop viewed the pectoral cross and invested David with the Canon Garland Memorial Medal during an impromptu ceremony in his office. 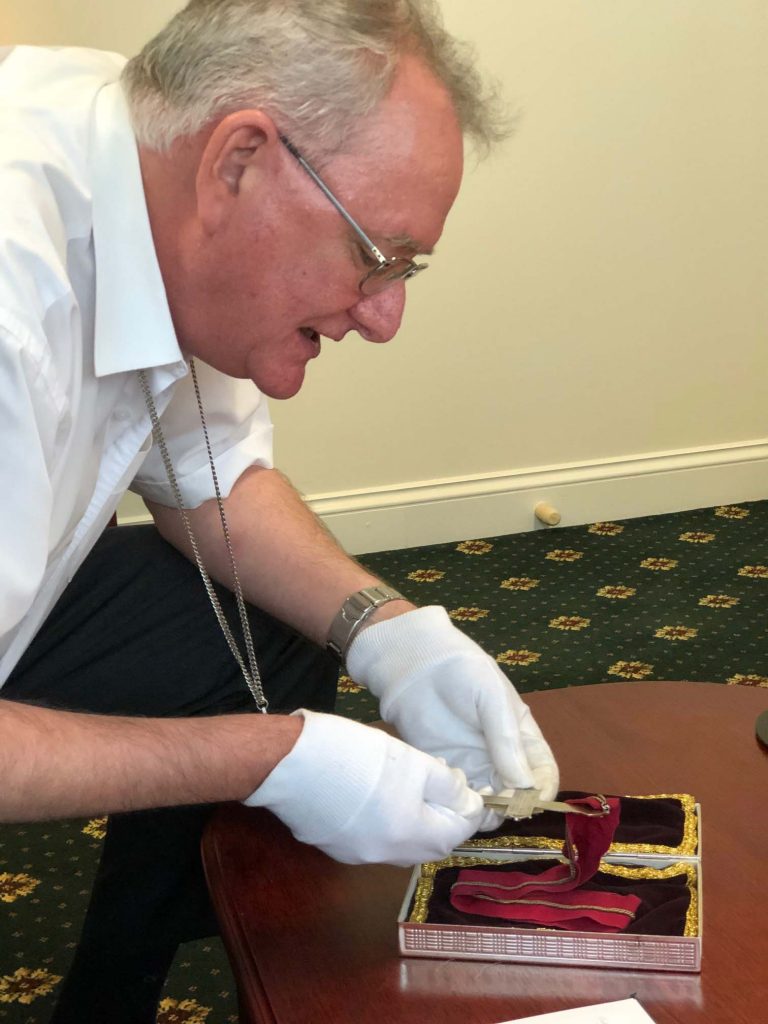 Archbishop Phillip Aspinall with the pectoral cross, which might be gifted to the Museum of Brisbane

The story of the Pectoral Cross is entwined with Canon Garland’s war service and community work.

As a result, in 1920, Canon Garland was conferred the Order of the Holy Sepulchre by the Patriarch of Jerusalem, of the Greek Orthodox Church. As part of his investiture, he received a small gold cross – believed to hold splinters of the cross upon which Jesus was crucified. At the time, the Patriarchate was only able to afford a small cross, so in 1924 the small cross was reset, with rubies, into a full-size pectoral cross, and presented back to Canon Garland. The resetting was funded by the Greek Orthodox Community of South Brisbane. The Church Chronicle (November 1, 1924, p.219) says that:

“The Order of the Holy Sepulchre is said to have been founded by Empress Helena in the early part of the fourth century, and for centuries it was bestowed only upon royalty…The gift of the cross carries with it little particles of the True Cross.”

Before he left for the war, Canon Garland had been rector at Holy Trinity Church, Woolloongabba.

Upon his return to Queensland in 1920, Garland became rector of Ithaca and continued a diverse and illustrious career of community involvement. From 1920 until 1930, Garland conducted Anzac Day ceremonies in Toowong. A Stone of Remembrance and Cross of Sacrifice were erected in 1924. In 2015, the site was renamed ‘Canon Garland Place’ in his honour. Canon Garland was also awarded an OBE in 1934.

David Ratcliff was full of praise and gratitude for the week’s celebrations, especially the ceremony with the Canon Garland Overpass.

“Yesterday was a fantastic day because it was the 80th anniversary of his death and it was in some ways fitting that we were able to celebrate it by the renaming of the commuter cycle way and overpass,” Mr Ratcliff said.

“But it’s wonderful for us to see that he’s also remembered at other places around Brisbane – such as Toowong Cemetery where we had a few quiet moments yesterday as well.

“Canon Garland wanted to be buried just on a slightly raised piece of ground at Toowong, overlooking the whole portion where the remains of hundreds of Anzac soldiers were buried so that he could continue to look after his boys who were buried there.

“He’s also recognised with a plaque at Kangaroo Point Cliffs lookout. He certainly was a very loved person in this community. I understand it’s unusual to have pieces of transport infrastructure named after long-deceased members of the community. And so it’s a great honour to him and to his work in Brisbane. The appreciation of love and respect for my great uncle in Brisbane has been truly moving.” 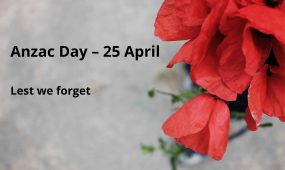 The Ratcliff and Garland families have been considering gifting the pectoral cross to the city of Brisbane. While in Brisbane, Mr Ratcliff met with officials from the Museum of Brisbane for more serious discussions about the potential gift, which is now almost certain to happen over the next two to four years.

“I will return to England and have further discussions with family members but I have a newfound – and profound – appreciation for the esteem and respect that the city of Brisbane and especially the Anglican Church and the Canon Garland Memorial Society have for my great uncle and his legacy,” Mr Ratcliff said.

“I feel the time is right for the family to consider this important decision, but things are being put in place for the cross to return to Brisbane to be reunited with the city which is the resting place of Canon Garland and his wife.” 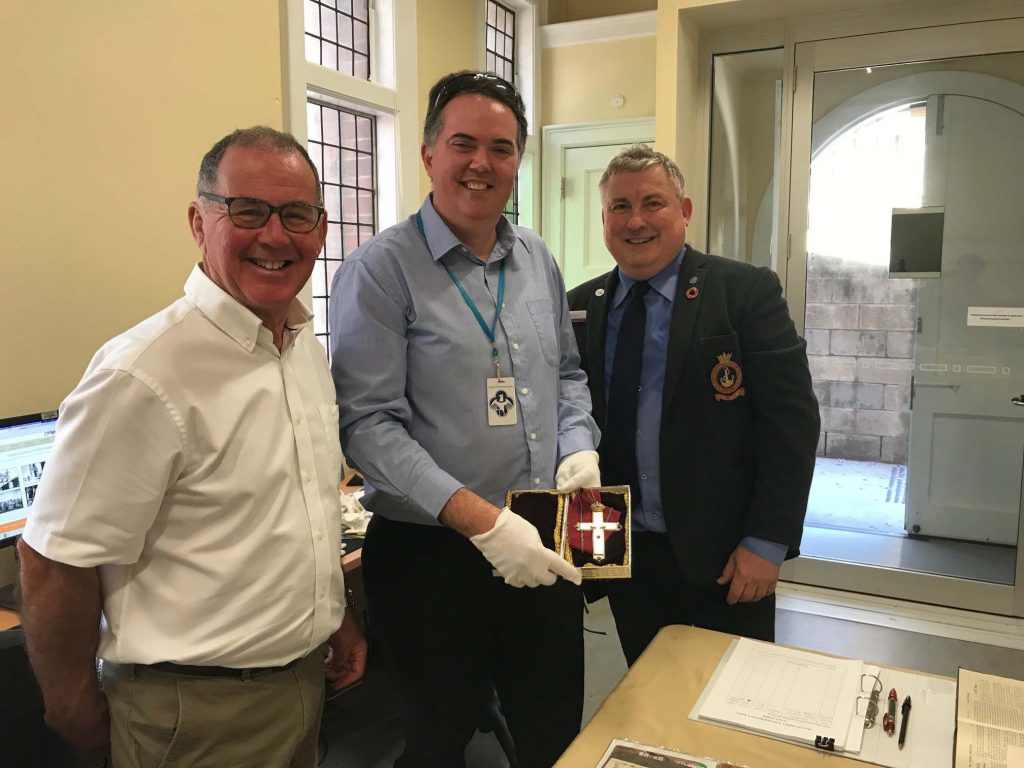 Mr Ratcliff spoke about Canon Garland in a lengthy interview with ABC Radio morning host Rebecca Levingston. The full interview can be heard here, and additional photos from the event also available.

The Canon Garland Memorial Society hopes the visit and renaming of the overpass will foster interest in the life and works of a man who, as a volunteer chaplain, dedicated almost 40 years of his 50 years in Holy Orders to the spiritual and material wellbeing of Australian Defence Force personnel in times of war and peace. 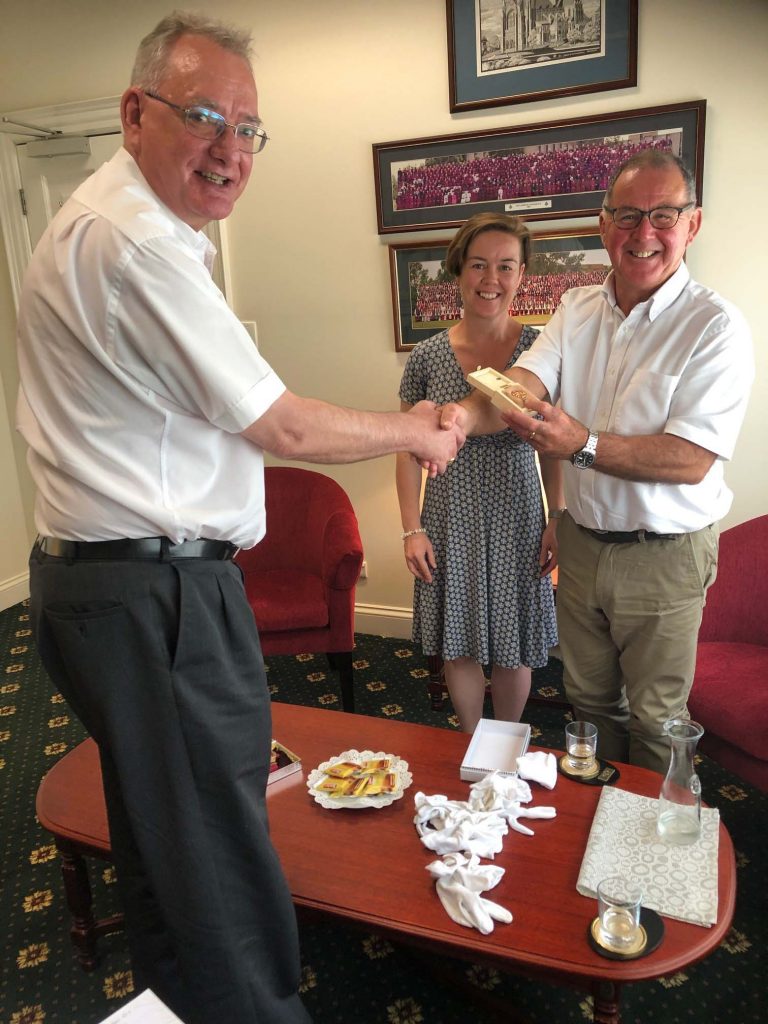