A memorial honouring the lifesaving efforts of servicemen and women of the 117th Australian General Hospital (AGH) and No. 1 Australian Orthopaedic Hospital during World War II now takes pride of place at The Glennie School.

The Australian Army requisitioned the Glennie Anglican Girls School in Toowoomba. It established the Surgical Division for its 117th Australian General Hospital (AGH) in January 1942, opening with two officers and 78 personnel from other ranks, including ten sisters.

A mess was opened, and the sisters and Voluntary Aid Detachments moved into Glennie. The first operation took place on 10 April 1942. It forced the movement of the Glennie Preparatory School and the boarders to Smithfield – an 80-acre property on the corner of Drayton Road and Alderley Street.

Hospital wards were built on the eastern end of the original Glennie Preparatory School grounds with other original Prep School buildings used as the hospital theatre, intensive care, x-ray and physio huts.

From May to July 1942, a total of 554 operations were performed, 55 of which were major ones. The walking wounded were allowed the freedom of the city, but were required to wear ‘hospital blues’. A bus ran from the city via Anzac Avenue to the Glennie Hospital and School allowing patients to move around the city.

The Headquarters and Surgical Division situated on the Glennie Preparatory School site later became the No. 1 Australian Orthopaedic Hospital. It opened with 200 beds, while the 117 AGH retained 150 beds at Glennie for the surgical wing.

Glennie Old Girls served with distinction on the staff of the hospital. Members of the Armed Forces who were able joined in the Chapel services at Glennie on Sundays and physiotherapists from the hospital gave special lectures to the girls. The Orthopaedic Hospital had the use of the Glennie sports fields and laid a concrete pitch, which the girls were able to use for cricket. Some of the hospital staff also played tennis on the school’s courts. 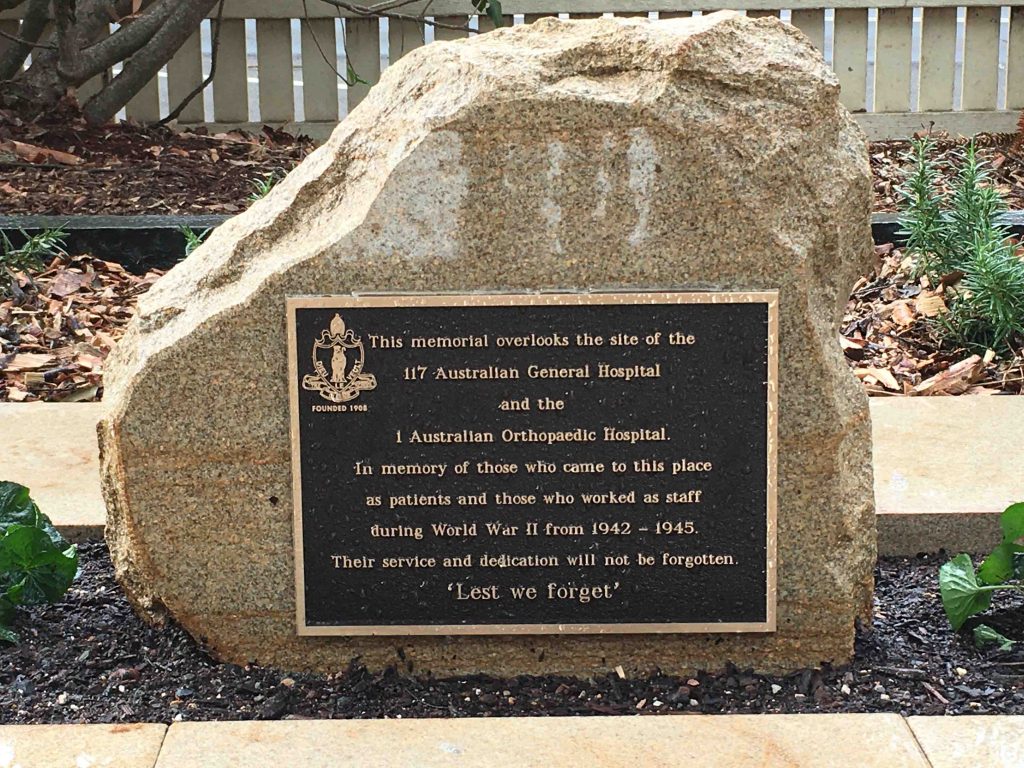 All products used to construct the memorial were sourced locally

When World War II ended in 1945, a two-day holiday was granted to all at the School. The girls visited the hospital, walking from ward to ward, singing and talking to those patients who were not able to get up and join in the celebrations.

In May 1946, Glennie regained possession of the former Preparatory School. In 1947, the hospital wards were purchased by the school and converted to a gymnasium and classrooms. The original Blue Dorm that was used by the hospitals, as the intensive care ward, was moved across the road becoming the main office building for the new Glennie Preparatory School, which reopened on its current site in 1992. Sutton House, the original Preparatory School building, was demolished in 1979, along with the music block which served as the hospital theatres during the war.

Hospital Ward 1 became the administration block of the relocated Glennie Preparatory School. Ward 2 is now known as Sutton House (after the first Principal of The Glennie Preparatory School) and houses the gymnasium. Ward 3 became the top level of the Performing Arts Centre and Ward 4 became the current Assembly Hall at the Junior Years Campus. The physio hut is the home for The Glennie Archive and Historical Collection.

Former Head of Junior Years, Mr Steve Warren, has long advocated for the memorial. After discussions with ex-soldier and Glennie parent, Mr Luke Myer, Steve successfully secured a grant through the Department of Veterans Affairs.

All products used to construct the memorial were sourced locally, including Helidon sandstone and Toowoomba Bluestone (basalt) and the plants include Gallipoli Roses, Gallipoli Rosemary and Toowoomba Violets, with each holding significance to the wars.

Steve Warren, the Ryan family, John Lees and Luke Myers kindly volunteered their time to construct this memorial. It is a stunning visual acknowledgement of the school’s rich history and a fitting way to remember the staff of both hospitals and their dedicated service to patients.

On Monday 11 November at 10.50 am, Glennie students and staff will assemble in the Centenary Gardens to listen to the ‘Last Post’ and observe a minute’s silence, culminating in ‘The Rouse’ being played. Afterwards, they will lay a floral tribute at the newly-installed memorial.