Climate change and sustainability became a priority for me in 2007 during the Brisbane drought when water levels reduced to under 20 percent of capacity.

We appreciate our fellow parishioners at St Andrew’s Anglican Church, South Brisbane who are helping the church and community become more sustainable, including a Youth Group leader making compost from church scraps, the Sunday School which built a garden, and parishioners riding their bikes to church and getting solar panels installed on the hall. We are also learning together, most recently in a ‘Living the Change’ workshop run by the Queensland team from Australian Religious Response to Climate Change (ARRCC).

At our home we have put in water tanks, changed light bulbs, installed insulation and Solar PV, composted, reduced our plastic and other waste, and continue to experiment with ways to improve sustainability.

In 2012 we purchased a Nissan LEAF EV (electric vehicle) – not a hybrid, but a car with just an electric motor and battery. The EV questions most commonly asked are “how far?” and “how much?” The car cost around $50,000, although now they can be purchased second hand for around $20,000.

Our LEAF has travelled almost 140,000km. We charge it mainly at home at night with 100 percent GreenPower from our electricity retailer or from Solar PV during the day. I have charged it at a public charger a handful of times when I have been a long way from home, which was a welcome change from visiting petrol stations.

The main problem with our 2012 LEAF was its range of around 130km, which limited how far we could travel by EV to mainly around town. The Tesla Model S and Model X, with much longer ranges, became available in the years since, but were priced at more than $100,000. The LEAF battery also degraded more quickly than the manufacture expected, but the warranty ensured it was replaced with a new one.

Today there are more EV options with longer range and hundreds more models planned. The new Nissan LEAF and the Hyundai Ioniq have about twice the range of our old LEAF and the Hyundai Kona has three times the range. The cost of these is between $50,000-$65,000 but there are no second-hand cars available yet. Other makes and models are also available, or soon will be, including the Renault Zoe and Kangoo, BMW i3, Jaguar I-Pace, Mercedes EQC and Audi e-tron. Tesla also recently brought out their cheapest car yet, the Model 3, which has a range of 360-380km and costs around $70,000.

I wondered whether the time of EVs had finally come? In September we purchased a Model 3, having been on the waiting list for three years, and decided to go on a long-distance road trip to places where many other people like us were likely to go. We decided to use just the public high-speed charging stations, which had recently been built. We ended up travelling 8372km in 14 days, with a total charging cost of $7.86. It sounds almost too good to be true, so let me tell you more about what we did.

First, we travelled from the Gold Coast to Cairns and back. The Queensland state government had built high-speed EV chargers on the route, roughly every 200km. High speed being 50kW, meaning it took 40-50 minutes to charge up around 200km of range. That length of time was good to have a drink, meal, stretch, rest and toilet break. It took us two long days of driving to get to Cairns, which is comparable to a petrol car. We drove back home in a more leisurely three days.

Apart from getting a tyre leak due to a screw in the last 50km of the trip, the journey was hassle free. The charging process was also easy and we only had to wait once for someone else to finish charging and this was only for 20 minutes. Using the charging network was surprisingly totally free.

Then after a short break at home, we travelled from Brisbane to Melbourne and back. This is a much busier road trip route and there were several more charging options. On this trip we mostly used the Tesla superchargers. They were around 100kW, meaning it took half the time to charge up compared to the Cairns trip, that is 20-25 minutes for around 200km of range. The shorter charging times were welcome, although sometimes we were a bit rushed to complete our break because the car was almost ready before we were. These charging stops did not cost us anything because we had some free supercharging credits from a Tesla referral program. 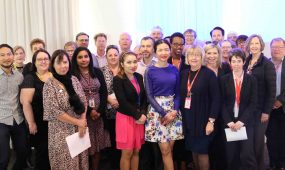 People of faith commit to living sustainably around the nation

It took us just two days of driving to get from Brisbane to Melbourne and the same time to drive home, which again is comparable to a petrol car. We also used a few NRMA chargers, which are the same type as the ones in Queensland, which were also free. The only cost we incurred was using a commercial charging network – a couple of new large networks are being built between major population centres by Chargefox and Evie. They are installing ultra-rapid chargers, which are capable of 350kW charging speed, although no cars can charge that fast yet. We tried one out, which had a 100kW charging speed, and spent a total of $7.86.

All up we travelled much further than most people would consider driving on a road trip, and we concluded that, at least on the east coast, it is now very possible to travel long distance in an electric vehicle. We also blogged short videos of how to charge, and had discussions about autonomous driving, how clean our electricity is for EVs, and how clean batteries are.

We have been given an amazing creation to enjoy and sustain us, but we have also been given the responsibility to be good stewards. There is much more we can do as individuals and faith communities to care for creation and prevent climate disruption. I am optimistic that together we can meet the climate and environmental challenges of the 21st century.