The Rev’d Danni Clark freely admits her journey to ordination has been an unconventional one and that she breaks the traditional mould of an Anglican priest.

But, that made her ordination last Saturday so much more memorable and emotional when she was joined by family and fellow ordinands at their special service at St John’s Cathedral.

The ordination service also reinforces and symbolises the broad church which is the Anglican Church of Southern Queensland.

The Rev’d Danni grew up in rural England as one of three children and describes her childhood as “chaotic”. Although drawn to music and prompted to join the local church choir at a young age by her piano teacher (“we weren’t a family of church-goers”) she was a self-confessed “teenage rebel” and dreamed of a music career while playing in garage bands.

“I think my parents did the best that they could…but there wasn’t an awful lot in the way of guidance,” The Rev’d Danni said.

“I left home when I was 16 – some time after my parents divorced, but I still stayed in school. I was working in a pub at night while attending school during the day and it was a case of just surviving for a few years there.

“I’m blessed because my life could have turned out very differently. I played hard, but I also worked hard to pay the rent and made sure I finished school.”

She attended theological college in the UK and became more involved with the church, while also working in theatre and with people who were homeless.

However, it was through her ‘church family’ that The Rev’d Danni said she found solace and direction.

“My Church of England parish family provided me with lots of friends and extra ‘aunts and uncles’,” she said.

“That’s where I found stability, although I became more deeply involved in my church after my first daughter was born when I was 24. My husband David and I had met when I was at school and started dating after school.

“When I had a new baby, I reflected on having survived the roller coaster of life, which I thought was all a bit of a miracle. I didn’t want my daughter to struggle to find where her family was and to feel connected to family, so in the months after the birth I went back to my old church in Essex.”

When her second daughter was born, The Rev’d Danni began to immerse herself in church and parish life and before too long she was being told by parishioners that she would make a good vicar. She enrolled in theological studies at Lincoln Theological College, despite her local vicar not being generally supportive of women priests.

“I had to do some soul-searching. I felt I was being called to faithfulness by God, but I thought: ‘They don’t make people like me vicars’,” she said.

“But the pull towards faith was strong. It’s an in-built, genuine calling inside of you. I tried several times over the years to run away from it, but kept getting pulled back.

“In England, it also got to the point where, despite attempts by my local vicar to suggest alternative pathways for me, my sense of calling to priesthood persisted. Eventually, David and I decided we were going to move to Australia in 2014 and by that time we had four daughters.”

Despite her English theological studies and having undergone discernment in England, The Rev’d Danni replicated the journey in Brisbane at St Francis College from 2016 to 2018.

In many ways, The Rev’d Danni breaks the mould of a typical Anglican priest with her brightly (and ever-changing) coloured hair, multiple piercings, along with a left arm filled with colourful tattooed artistic impressions of her four daughters and other personal artwork.

“People say ‘Crikey, she’s in there and the roof hasn’t blown off, so hopefully that might inspire others who are a bit different from the traditional Anglican priest,” she said. 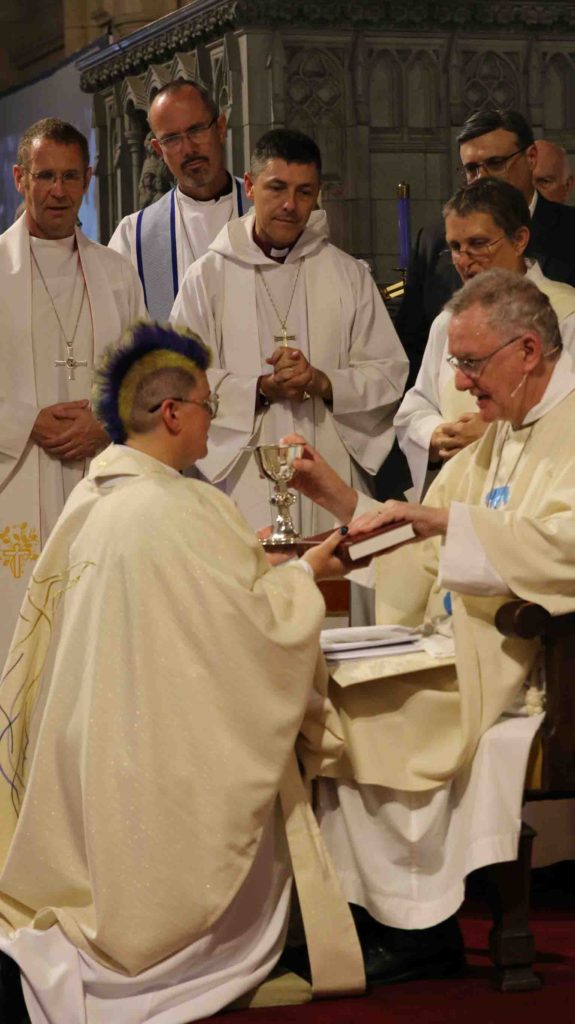 Archbishop Phillip Aspinall presenting The Rev’d Danni Clark with symbols (a Bible, chalice and paten) of a priest’s sacramental role to preach the word of God and to administer the holy sacraments

Like The Rev’d Danielle Clark, The Rev’d Juliana Bate did not come from a traditional church-going family and her parents also divorced when she was young while growing up in New Zealand.

She was always “spiritually and intellectually curious”, which led her to become an altar server at her Catholic School when she was 10 and served in churches in various roles until high school. She stopped attending church in high school and only resumed after she had met her now-husband The Rev’d Chris Bate when they moved to Australia in 2006.

They were married in 2008 and joined the Parish of Waterloo Bay (after the birth of their children in 2012). Both Juliana and Chris had a sense of calling around the same time, but agreed it was impractical for them both to study conjointly at St Francis College, especially with young children. The Rev’d Chris Bate was eventually ordained in 2017 and Juliana was ordained a deacon last Saturday. 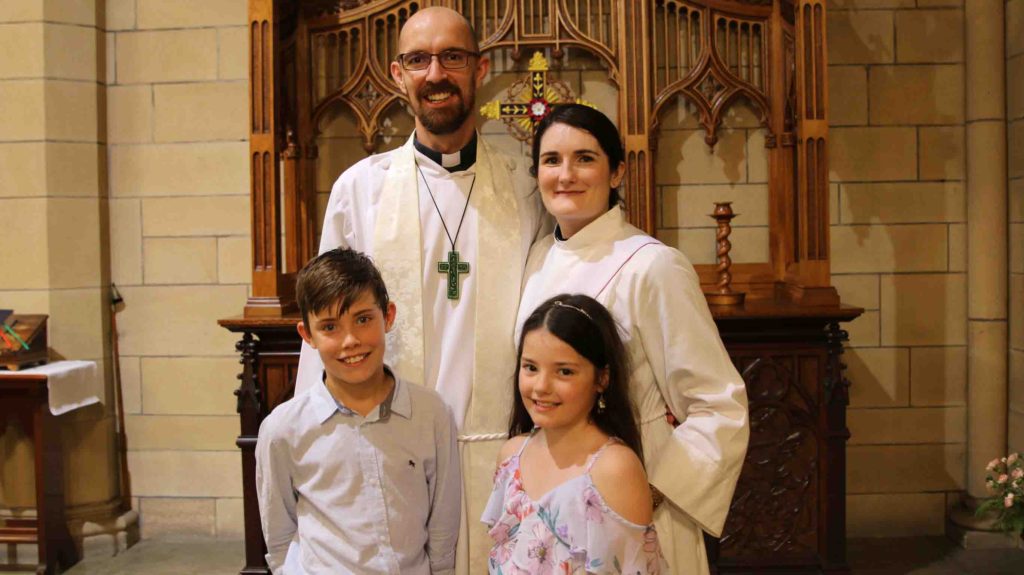 “There is a unique quality in being married clergy, especially with young children,” The Rev’d Juliana said, pictured here with husband The Rev’d Chris Bate and Connar, 10, and Victoria, eight

“Discerning the call on my life as a Christian has been one of the biggest challenges. Like a lot of people, my life has not been without its mistakes or regrets,” said The Rev’d Juliana.

“There have been poor decisions that affected the course of my life and the relationships that I have with others. There have been areas where reconciliation has occurred and other experiences where the damage and hurt cannot be undone. Yet each experience has brought me to where I am today. In each experience I have grown, learnt and become who I am.”

The Rev’d Bate has been working as a trainee chaplain across three schools – most recently at West Moreton Anglican College.

Juliana and Chris are among 23 ordained married couples in the Brisbane Diocese and The Rev’d Juliana says they have drawn strength and support from other ministry couples, including priests Zoe and David Browne.

“There is a unique quality in being married clergy, especially with young children (Connar is aged 10 and Victoria is aged eight),” she said.

“The family and the children make huge sacrifices for us to both go into ministry, especially when our study overlapped. The demands on our time are significant so we have to consciously allocate time with each other to just be a normal family and to strike a balance with our marriage and find some balance for our children.”

The Rev’d Juliana says she is called primarily to school chaplaincy, but also works collaboratively in a parish.

The 2019 ordinations continue the recent trend of women outnumbering men. Since 2008, there have been 47 women ordained as priests in our Diocese, compared to 37 men (women were first ordained in the Anglican Church in 1992). 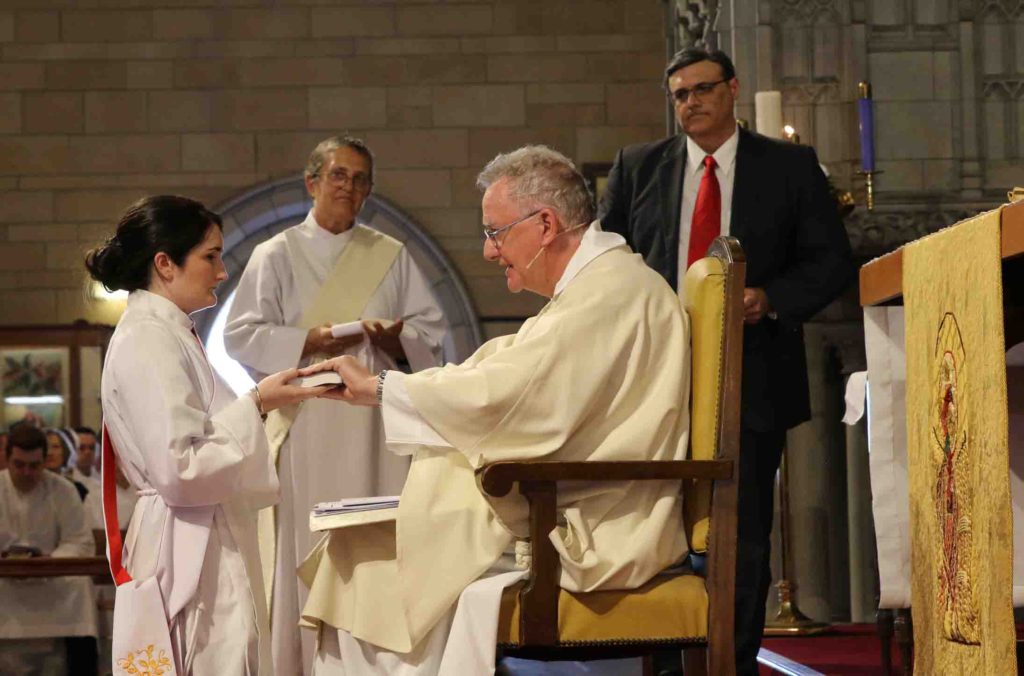 The Rev’d Michael Calder grew up in a Christian family and continues a long lineage of Anglican priests in his family. His grandfather on his mother’s side, The Rev’d Frank Copland, who regularly read him stories from the Bible as a child, served as curate at St Stephen’s, Coorparoo before serving in the parish of Old Guildford, Sydney for 30 years.

Aged 24, The Rev’d Michael is one of the youngest ordinands from St Francis College in recent years and says a journey to ministry has been on his mind since he was 14. It was his work in youth ministry on the Sunshine Coast where his father, The Right Rev’d Mark Calder (who was recently appointed Bishop of Bathurst) served as Rector of Noosa (2009-2019) and Priest-in-Charge of Cooroora (2016-2019).

“My faith was tested when I was reaching the final years of high school and I guess I was forced to take ownership of my faith. God has always been in my heart, but that has grown as I grew older,” The Rev’d Michael said.

“There was never any pressure by any of my family – only ever love and support and it was great to be able to have more spiritually meaningful conversations about faith as I grew older. I did consider other career options – teaching, chaplaincy and being a pilot with Mission Aviation Fellowship Australia. 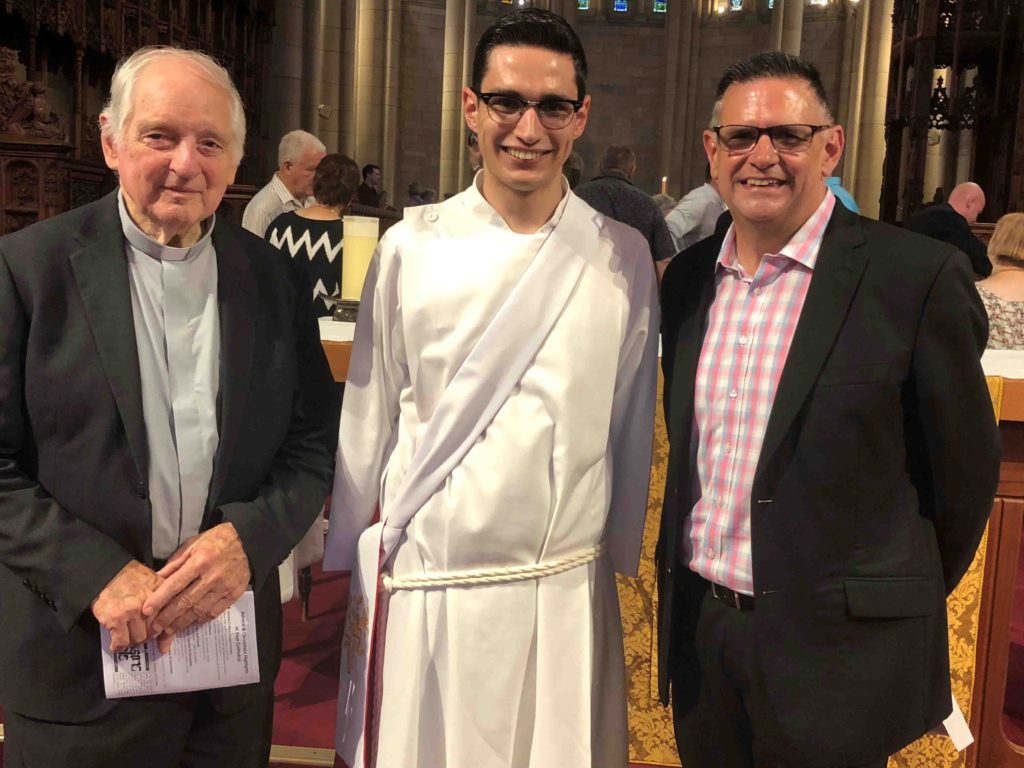 Three generations of one family in service (L-R): The Rev’d Frank Copland, The Rev’d Michael Calder and his father The Right Rev’d Mark Calder, Bishop of Bathurst

“I worked as a barista as well for a while after I left school, but that was only ever temporary while I undertook theological studies. Because of my conviction as an Anglican, I then decided to pursue the path to Anglican ordination in 2016 with my year of discernment and my conviction only growing stronger since then.”

The Rev’d Michael says with a big gap in parishes in our Diocese of people aged between 20 and 40, he wants to help to build a bridge between the generations. He believes that within people of faith, everyone’s greatest need is their relationship with Jesus under an umbrella of faith forgiveness and freedom.

“I know there are many challenges ahead for me. One of the greatest challenges is to stay on a true path and to keep the Gospel at the heart of what I do in my ministry,” he said.

“The world needs good news amid all the selfishness, greed and turbulence in everyday life. I’m passionate about doing whatever I can to help people know and understand God’s word through the Bible.” 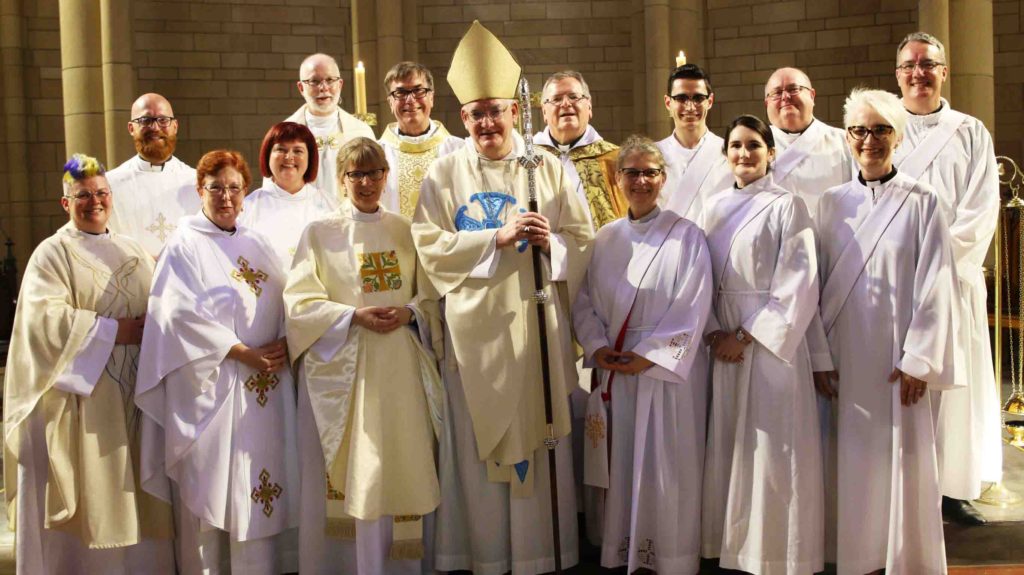 The Archbishop of Brisbane The Most Rev’d Dr Phillip Aspinall, The Very Rev’d Dr Peter Catt and The Ven. Mark Carlyon with the priests and deacons ordained on Saturday 7 December in St John’s Cathedral