My interest in the work of the Anglican Church overseas began from my early life in rural Victoria, where we had an Anglican Board of Mission money box on the kitchen mantelpiece and regular mission newsletters. After completing my general nurse and additional midwifery training, life presented various opportunities, including a short period training in breast cancer with Cancer Council of Victoria.

Years later, while attending a Bishop’s Spouses’ conference, I listened to a talk presented by Misha Coleman, the then CEO of Anglican Overseas Aid (AOA) — not to be confused with Anglican Aid Abroad. Misha described a new breast cancer partnership project with the Diocese of Jerusalem at the Ahli Arab Hospital in Gaza. The project ‘Women Die Waiting’ was raising funds to enable women to access breast screening, train local facilitators to educate men and families, and assist with the permit paperwork required to leave Gaza for breast cancer treatment.

I asked Misha to contact me if there was any way I could help. A few months later, at the Diocese of North Queensland’s Synod, I was commissioned as AOA’s first ambassador and Synod moved a motion to support the project financially and in prayer. Since that time, I have taken an active role in promoting the wider work of AOA across North Queensland, occasionally in other Dioceses, and through Mothers Union. Two years ago, I was appointed to the AOA Board and currently serve on their Development Committee.

Recently I had the opportunity to participate in a self-funded AOA Board trip to gain first-hand experience of two programs we support in the Occupied Palestinian Territories — the Spafford Children’s Centre in East Jerusalem and the ‘Women’s Health and Wellbeing’ project (breast cancer) at Ahli Arab Hospital (AAH) in Gaza. This trip enabled the CEO, The Rev’d Dr Bob Mitchell, a few other Board members and me, to acquire deeper insights into the work and dedication of our partners, to gain some appreciation for what has been achieved, and possibilities for future work.

Gaza is a small strip of land, only 40km long and 6-8 km wide, in the Occupied Palestinian Territories. It is home to about 2 million people, 800,000 of who live in refugee camps. People experience chronic shortages of supplies of every kind, including 12 to 16 hours of electricity outages per day. Around 65 per cent of the population is unemployed, with many more under-employed, resulting in 80 per cent living on food parcels supplied by non-government organisations.

After negotiating the Israeli checkpoint allowing us to move through the wall that surrounds Gaza, we then walked a kilometre through security fencing to the Gaza checkpoint to be processed again before boarding a bus to Gaza City. The bus journey took us through small farm lots to housing areas where poverty and some destruction from recent missile strikes was evident. Amidst this bustling, oppressive and sometime dangerous environment is the compound surrounding the Ahli Arab Hospital. It is an oasis of peace and hope. How do these amazing people continue to work here?  As one of the hospital staff members explained, “We the staff aren’t taking care of security, because God is taking care of that and this is how we function.”

We met the dedicated and energetic Director, Ms Suhaila Tarazi, the Medical Administrator, and several other staff, who outlined the work of the hospital, including the women’s health program. We visited the new breast screening facility, which enables culturally appropriate screening, diagnostics and consultation. We also visited other areas of the hospital and dropped in on a session where a group of women living with breast cancer were participating in an education and psychosocial support group aimed at rebuilding self-esteem and personal empowerment.

Suhaila Tarazi said that, “We are very happy to be in partnership with AOA. because of AOA, Ahli Arab Hospital is doing God’s work for the vulnerable and the poor. And, to all those who give to AOA for Ahli Arab Hospital, we say thank you!”

Breast cancer is the third highest cancer diagnosed in Gaza, with an expected 150 per cent rise in breast cancer mortality by 2040 (International Agency for Research on Cancer). When breast cancer is discovered early enough it not only saves the woman, but it also saves her family. In Gaza society, men hold the decision-making power, including attendance of breast screening. Women’s health, particularly aspects such as breast cancer, are commonly considered taboo topics. If a woman has breast cancer she may be ostracised by her husband. The associated stigma will affect other women in her family, reducing marriageability and security, thereby creating further poverty.

Once diagnosed, mastectomy is the only local option for most women. While limited private chemotherapy is available, it is largely unaffordable. Difficulty with referrals and health system fragmentation means that follow-up services are underutilised. After mastectomy, radiotherapy therapy is recommended, yet this is not obtainable for women in Gaza. Women have to go to Israel or Egypt to receive this treatment. As Gaza’s borders are controlled by Israel, women need a medical exit permit to leave Gaza. However, these permits are very difficult to obtain (requests are often rejected) in a timely manner. Therefore, survival rates for breast cancer in Gaza are only about 40 per cent, compared to 90 per cent in Australia.

In response to the health needs of the people of Gaza, the Diocese of Jerusalem established the Ahli Arab Hospital in Gaza City to provide affordable and/or free care locally and through outreach clinics. Apart from the usual workload of care needs found in any hospital, this hospital contends with military-induced trauma and the challenges of unpredictable or unattainable supplies. The hospital is also engaged in training and upskilling local people in social work, first aid and medical aid, as accessing training outside Gaza is not possible.

Financial support from Anglican Overseas Aid and other organisations is essential to enable the work of the Ahli Arab Hospital to continue. Funding is especially important for a health problem such as breast cancer with its wider implications for the survival of families. Yet, despite the high mortality rate, breast cancer is not funded by the local Ministry of Health. While we cannot prevent breast cancer, early detection and treatment is the key to increasing survival rates. Factors contributing to late detection, including lack of knowledge, fear and the common culturally-based responses of men, the challenges of accessing treatment, and the availability and affordability of treatment options, require a locally-driven, externally-supported and broad-based response.

The Women’s Health and Wellbeing program aims to increase survival rates by addressing the barriers to early detection and improving support for women. In the last three years the free breast cancer program at Ahli Arab Hospital has screened approximately 2,200 women. About 300 cases of breast cancer are diagnosed each year. The project is having a positive impact on women’s attitudes to breast cancer, improving health seeking behaviours, building trust and contributing to long-term change. A recent report from our partner indicated that the community intervention engaging about 600 men annually is showing some positive signs of attitudinal change. Community education and psychosocial support sessions equip women to tell other women and men to tell other men, as well as providing intergenerational teaching through their families.

Nemah, one of the breast cancer survivors (called ‘challengers’), said that she and other Gazan women want to live in dignity, with fair access to medical care.

“Seven years ago, I was diagnosed with breast cancer. Because of your project, I was able to have my disease diagnosed earlier and so was able to recover more successfully,” Nemah said.

“We are a people who just want to live with dignity.

“One of my friends who has breast cancer has requested to leave Gaza for treatment four times, but she has been denied all four times. When she was first diagnosed, she felt like her life was falling apart. They still have hope in God and in good people that they will get the treatment they need.”

Anglican Overseas Aid’s work is inspired by the gospel of Christ, for example, in the Gospel of John 10.10b “I came that they may have life, and have it abundantly.” Through our partnership with the Ahli Arab Hospital, this project aims to enable women in Gaza to have life; to have greater opportunities to survive breast cancer through education, early detection and treatment; to be supported by the largely male decision makers in their lives; and, to be change agents in their communities.

The project aligns with several of the Anglican Marks of Mission. To achieve the aims of the program, AOA partners with the Episcopal Diocese of Jerusalem, and the Ahli Arab Hospital (AAH). The AAH is a faith-based organisation, daily showing God’s love in action. It proclaims the Good News of the Kingdom through its work in bringing health care to the poorest people of Gaza. In an environment of poverty, violence, insecurity and constant destabilisation, the team at AAH address a range of human needs with compassion and care, enabling women to feel safe to come there for breast screening, education and psychosocial support.

The program’s emphasis on supportive services and education about the rights of women to health care and the importance of breast cancer recognition and treatment, together with the men-to-men program, work towards transforming the unjust structures in the lives of women and society in Gaza.

While the project has made useful progress, work needs to continue to reach more women and men across Gaza. Further work is needed using a strengths-based approach and local capacity building to achieve greater gains for women’s rights and to increase participation in men’s programs.

During our visit to the Ahli Arab Hospital, a new five-year Partnership Agreement was signed between the hospital and Anglican Overseas Aid, continuing the long-term partnership begun in 1988 and the women’s health programs begun in 2009.

Director of Ahli Arab Hospital Suhaila Tarazi describes their work in this way:

“Living day by day with hands of God above our hands. God is leading our way; he opens the way to enable us to meet the needs with the love of Jesus.”

All faith-based agencies are experiencing a decline in their donor base as the worshipping population ages. We are looking at new ways to continue to support our partners. Connections with the wider community and younger donors are new avenues to explore. Continuing to prayerfully and financially support the Women’s Health and Wellbeing, and other, programs across the world will enable us all to work for “a peaceful, just and sustainable world free from poverty.” 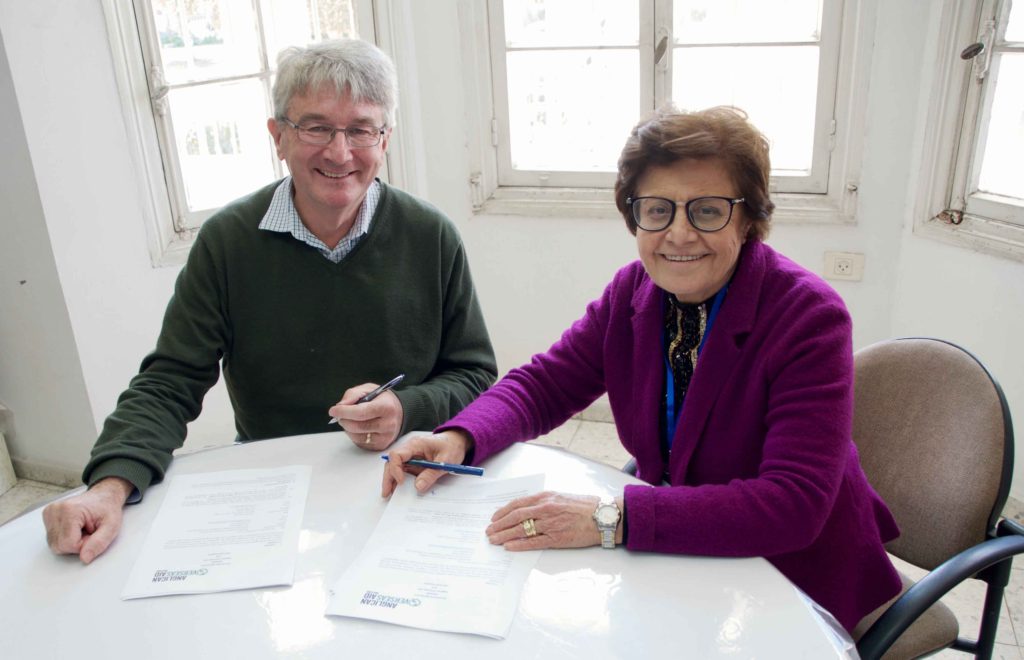 To enable this work to continue in God’s name, Ahli Arab Hospital through its partnership with Anglican Overseas Aid, requests your help. Previous support for the work of AOA has come from individual and parish monetary donations. In other Dioceses, some opportunity shops have periodically set aside takings for the work of AOA. A few years ago, I spoke at a Saturday breakfast meeting and Sunday services at St Andrew’s Church, Lutwyche. I would be willing to speak at other functions or services if your church community would like to invite me.

Anglican Overseas Aid acknowledges the faithful support of parishioners over the last 30 years. Individuals and parishes can begin, or continue, to support this work through prayer and monetary donations via the Anglican Overseas Aid website. To help individuals and parishes to focus their intercessions, a downloadable prayer diary (updated every three months) is available through the AOA website.

For further information about this project, visit the Anglican Overseas Aid website and read how Iman and Maria fought breast cancer in a conflict zone or read the Women’s Health, Women’s Rights Program Evaluation report 2018.