Beth Clewett once ran 100 yards (91.44 metres) in 12.3 seconds while in her sandshoes and stockings, but this wasn’t the only achievement she had in life having celebrated her 100th birthday on the weekend with her family.

The Symes Thorpe resident was over the moon with the surprise when staff bought a delicious cake and invited Beth’s daughter Sandy for the celebration on Friday.

Beth Clewett (née Walker) lived through the Great Depression as a teenager, the second World War as a young adult, and the death of her beloved husband, George in 1982 after 39 years of marriage. Her greatest joy, interest and achievement in life has been her family including their four children, 11 grandchildren, and 18 great-grandchildren with another one due in November this year.

Remarkably, she continued living in their family home in Toowoomba on her own for a further 32 years. A fall and increasing frailty at the age of 94, saw Beth make the decision to move into Symes Thorpe where she has been so well looked after for the last six years.

Beth was born in Sydney on 3 October 1920, the youngest of three daughters born to Sid and Elsie Walker (née Furner). Their young lives were greatly enriched by close connections and time spent with extended family including grandparents, aunts, uncles, and cousins. Both her sisters and their grandmother Alice Walker lived well into their 90s.

Beth loved sport and excelled in athletics, tennis, and netball during her school years in Sydney. She was fast in athletics and covered 100 yards in 12.3 secs from a standing start in her sandshoes and stockings. Now she has set another family record in reaching her 100th birthday.

Beth Clewett once ran 100 yards in 12.3 seconds while in sandshoes and stockings

Beth received a letter for her 100th birthday from Her Majesty The Queen, and letters from the Prime Minister of Australia Scott Morrison, the Governor of Queensland His Excellency the Hon Paul De Jersey AC, the Premier of Queensland Annastacia Palaszczuk, the Federal Member for Groom the Hon Dr John McVeigh MP, and the Member for South Toowoomba David Janetzki MP.

Beth’s secret to her long life comes from a determined mindset and heart to love, encourage, and support her family, enjoy her sport, grow a lovely garden, serve her community, entertain, travel, and love her friends.

Romance blossomed for Beth when she finally met the handsome brother of her close friend Peggy. They had both joined the Women’s Australian National Service (WANS) to help with the local war effort in Sydney. 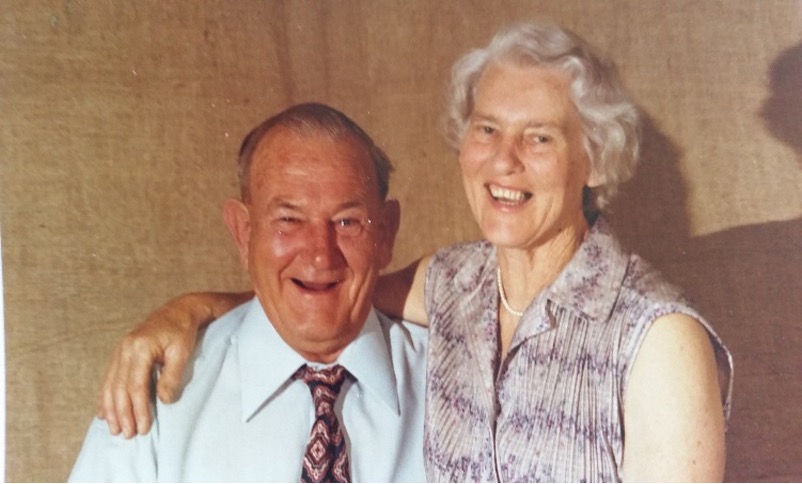 Beth with her late husband George

By the time they met in 1942, George, a civil engineer, had enlisted in the Australian Army. They were engaged in October 1942 and married on 25 May 1943 when George had unexpected leave. After he completed officer training down in Wagga Wagga, George was sent to Papua New Guinea with the Australian Forces and Beth returned home to live with her parents until the war ended. George secured a job with the CSIRO in Mildura and they were able to buy their first home close to the research station.

Sport has always been of great interest to Beth. She played tennis with a passion at school and then joined the Roseville Tennis Club in Sydney. She won the Hardcourt Victorian Ladies doubles in 1949 after moving to Mildura in 1946 with George and young son Murray. Beth continued to play tennis when the family moved to Scone in 1953 and on to Brisbane in 1959.

However, Beth was determined to see her own children benefit from completing their schooling and tertiary education. She knew how important that was for them, as she had to leave school after finishing her Intermediate Year because of the Great Depression. She completed a business course and began secretarial work.

When George and Beth moved to Toowoomba in 1973, Beth realised her lifelong dream to build her own tennis court. She enjoyed playing on her grass court with her family and friends until she was in her early 80s. Her grandchildren soon developed the greatest respect for her accurate serve and spinning backhand drive.

Beth has always taken a keen interest in her grandchildren’s activities, attending their sporting events, school speech nights, university graduations, and weddings. Many grandchildren spent time with her during school holidays and learned much about good table manners. She joyfully welcomed the arrival of great-grandchildren as the years went by.

Beth has been actively involved in community life over the 47 years she has lived in Toowoomba and found this a wonderful way to make new friends.

After settling into life at Symes Thorpe, Beth has enjoyed participating in the many activities offered. She loves talking about her family photos and albums and really values having her father’s artwork displayed on the walls of her room.

As a birthday gift her family have collaborated in producing a book about her father for her to enjoy, Paintings, Sketches and Etchings by F. Sidney Walker.

It has been a wonderful family project that we hope will become an ongoing legacy for the wider family as they too come to further appreciate her father’s talent as an artist and share Beth’s pride and joy in his work.