This year, Remembrance Day falls during NAIDOC week, which runs from Sunday 8 to Sunday 15 November. NAIDOC Week is a week of both remembrance and celebration for Aboriginal and Torres Strait Islander peoples. It is fitting, then, that the contributions of First Nations servicepeople to our country be honoured during this week. Specifically, a photograph in the collection of the Records and Archives Centre shines a spotlight on two Aboriginal men who, just before being shipped to the front in December of 1917, took the opportunity to marry their sweethearts at St Luke’s Mission Hall in Charlotte Street. Their names were John Geary and James Lingwoodock.

Sourced originally from the State Library of Queensland, a photograph of two First Australian Imperial Force (AIF) troopers standing outside St Luke’s Mission Hall, Charlotte Street on their wedding day has always been an image treasured by Archives staff. It shows what seems to be a very young Canon WPB Miles in the background, serving then as the superintendent of the Mission Hall. In World War I, St Luke’s on Charlotte Street served as an epicentre of assistance for soldiers both here and abroad. Miles assisted Canon David Garland, devoted Chaplain to the troops, to maintain the Soldiers Church of England Help Society. They communicated with hundreds of troops at the fronts, aided many in finding accommodation in Brisbane, and set up an Anzac Club at St Luke’s, open daily, and used for Sunday teas and dances. It also served as a place where many decided to ‘tie the knot’ before leaving for an uncertain future in the horrors of the First World War.

One such soldier was John Geary. In the wedding picture, he is the shorter of the two grooms, standing in front of Miles. Thanks to the State Library of Queensland, who has a profile on their website, a good deal is known about this young trooper. Geary was a stockman who was born and raised near Bundaberg on Wakka Wakka country. He, like so many of his trade, had superior horse skills, hence why he was placed with the famed Australian Light Horse Regiment. At the time, the Light Horse Regiment was in desperate need of reinforcements in Northern Africa and the Holy Land. A group of men were recruited for this purpose and called the 20th Reinforcements for the 11th Australian Light Horse Regiment. As many of these soldiers were First Nations peoples, the cohort later became known as the ‘Queensland Black Watch’. Indeed, the 11th Light Horse Regiment enlisted over 20 Aboriginal men, mostly from Western Queensland and Western NSW. 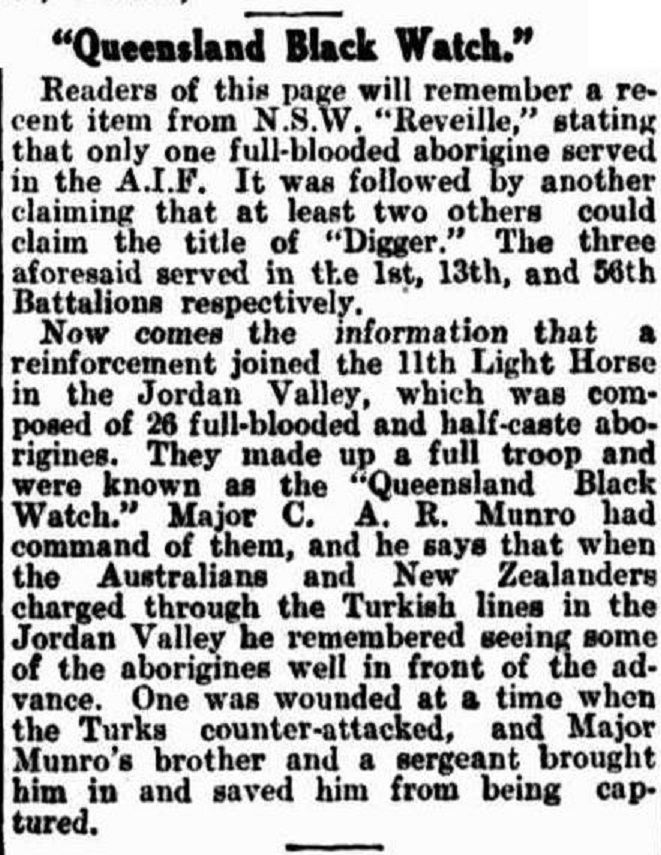 A news story about the ‘Queensland Black Watch’, from The Western Mail, 12 November 1931 (Image courtesy of TROVE) 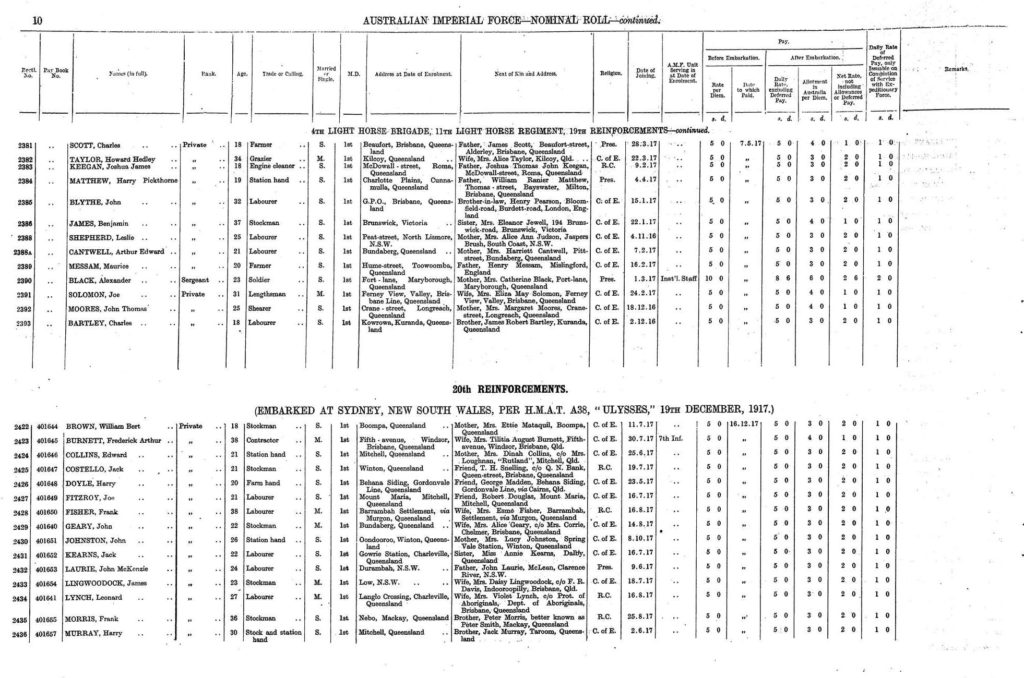 Embarkation Roll of 20th Reinforcements showing both John Geary and James Lingwoodock leaving on board the Ulysses, December 1918 (Image courtesy of the Australian War Memorial) 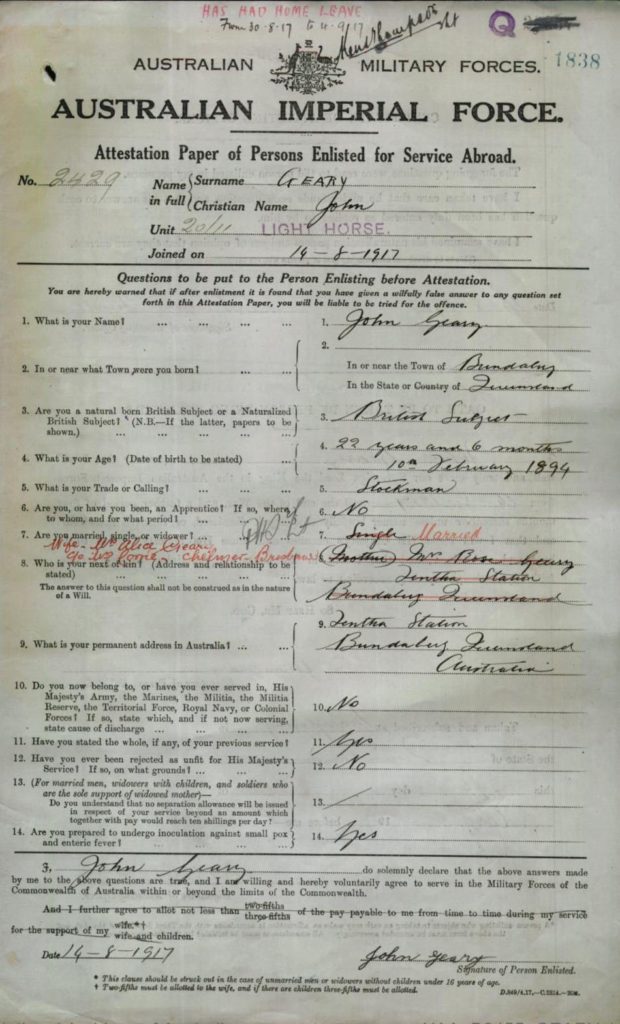 Knowing he was about to be deployed, John Geary married Alice Bond on 13 December 1917. A few weeks later, in January 1918, he and the rest of the reinforcements arrived in Cairo and commenced further training. However, his time there was to last only a few months. On 7 May, Trooper John Geary was injured after enemy aeroplanes bombed where he was camped in the Jordan Valley. He received a significant head wound and, after surgery and suffering from paralysis to his left side, was repatriated to Australia in July. At Tantitha Station, near Bundaberg, John reunited with his wife Alice. He recovered enough to start working again and he and Alice had a son a year later. Sadly, in 1921, another tragedy befell Geary, when both Alice and his son passed away. John Geary remarried in 1925 and moved to the Beaudesert area, where he passed away in 1953 at the age of 58. 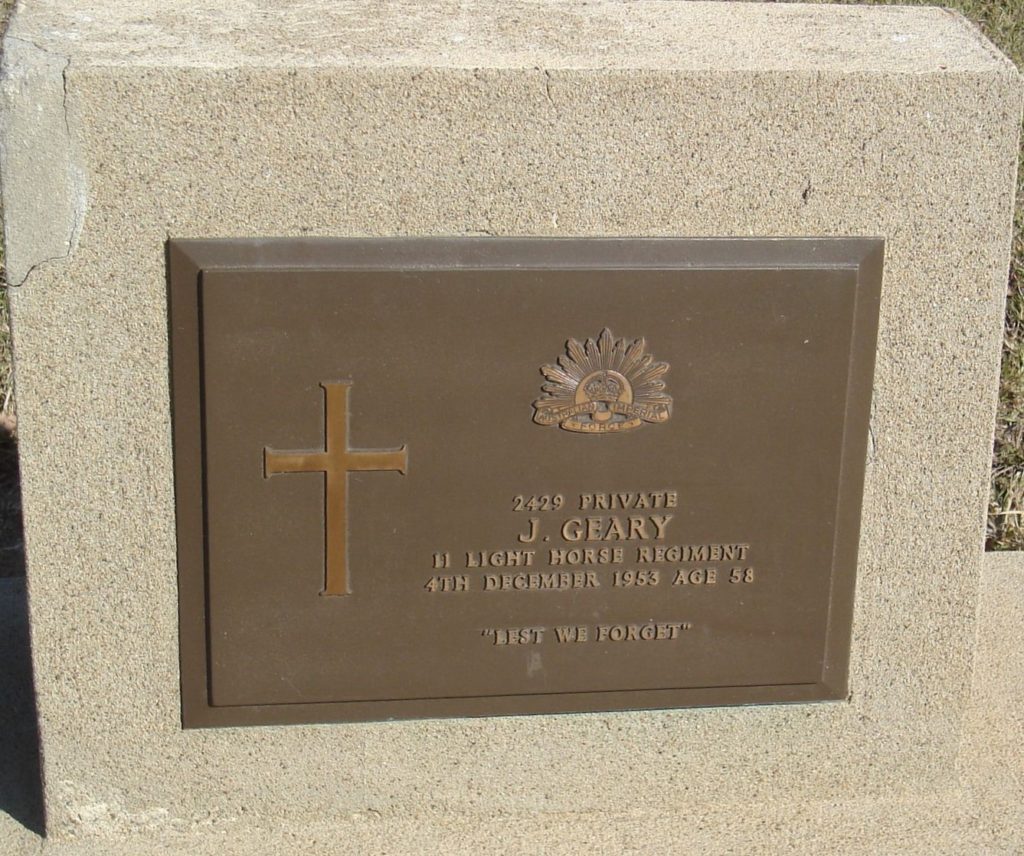 James Lingwoodock was a Gubbi Gubbi man from Gin Gin, approximately 50km south west of Bundaberg. His father had come from the South Sea Islands, and was ‘blackbirded’ and forced to labour on the Queensland sugar cane farms. He met James’ mother, Sarah, a Gubbi Gubbi woman in Queensland, representing one of many such couplings from that period.

Lingwoodock and Daisy Roberts are pictured in the wedding photo alongside John Geary and Alice Bond, and were married just before Lingwoodock was also sent as part of the reinforcements for the 11th Light Horse Regiment. Like Geary, Lingwoodock was a stockman, and his horse skills were said to be exemplary. As a part of the 11th Light Horse Regiment, James Lingwoodock was present at such battles as the Es Salt Raid, the battle in the Jordan Valley, and the Battle of Samakh. He eventually made it back to Australia in 1919 and went on to have many children with Daisy. He passed away on 7 May 1960 at the age of 65 and is buried at the Gympie Cemetery. 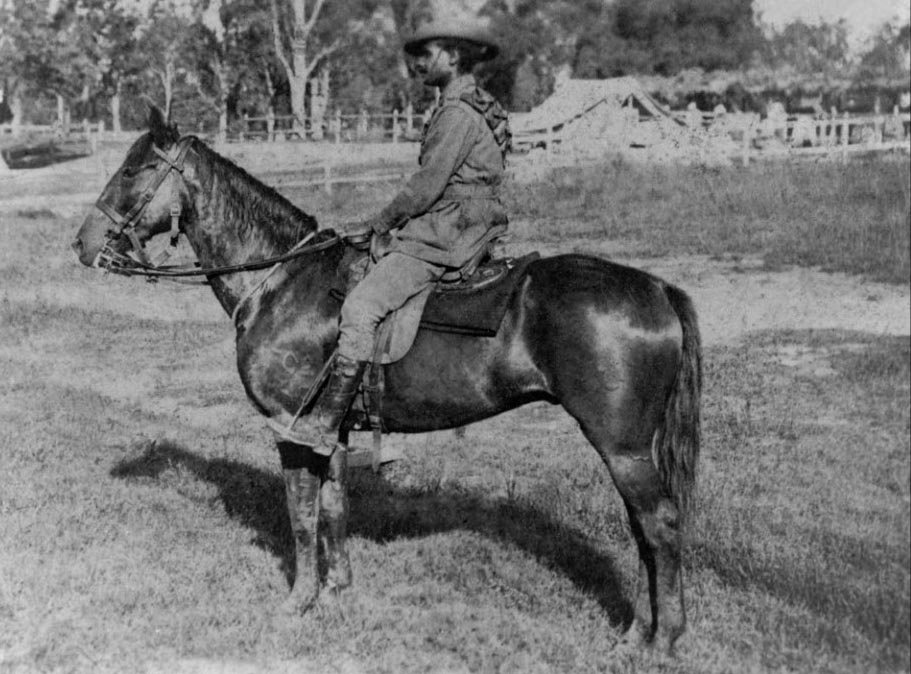 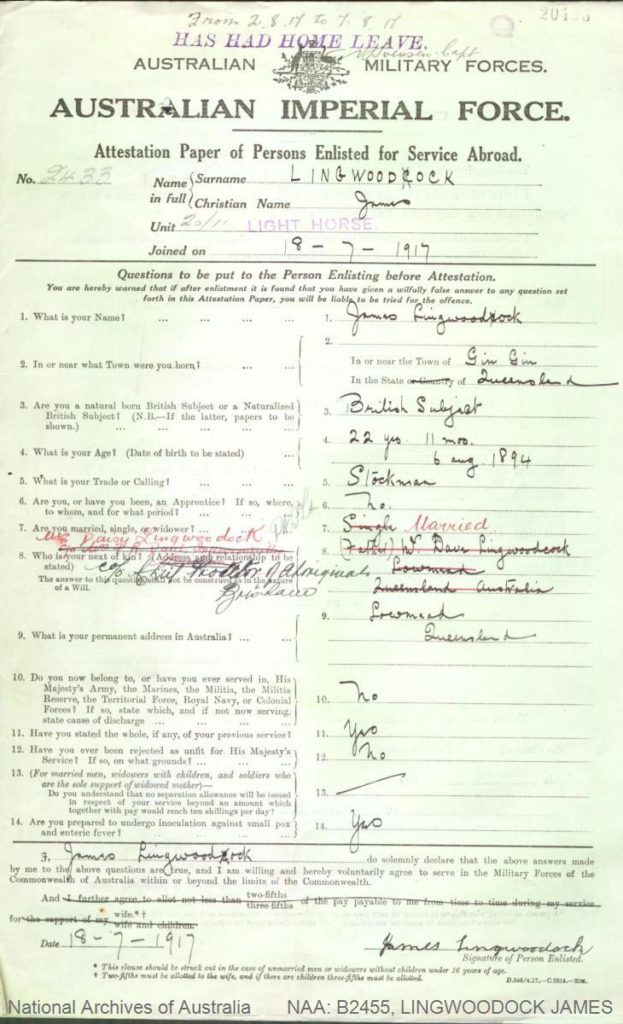 One of the many legacies of the wedding at St Luke’s Mission Hall that exist today can be found in the person of Anglican Ray Minniecon, Honorary Indigenous Minister at St John’s Church, Glebe, NSW. Minniecon is a Gubbi Gubbi, Goreng Goreng and Australian South Sea Islander man and co-founder of the ‘Coloured Diggers Project’ in Redfern, NSW. In December 2017, on the 100th anniversary of the Light Horse’s incredible charge at the Battle of Beersheba, he donned his grandfather James Lingwoodock’s uniform and travelled to the place of the Battle of Beersheba to participate in commemorations. Interviewed by SBS upon his return, Minniecon said, “We know that our people kept the memory alive of all of these people here, we just want to make sure that Australia keeps that memory alive too.” 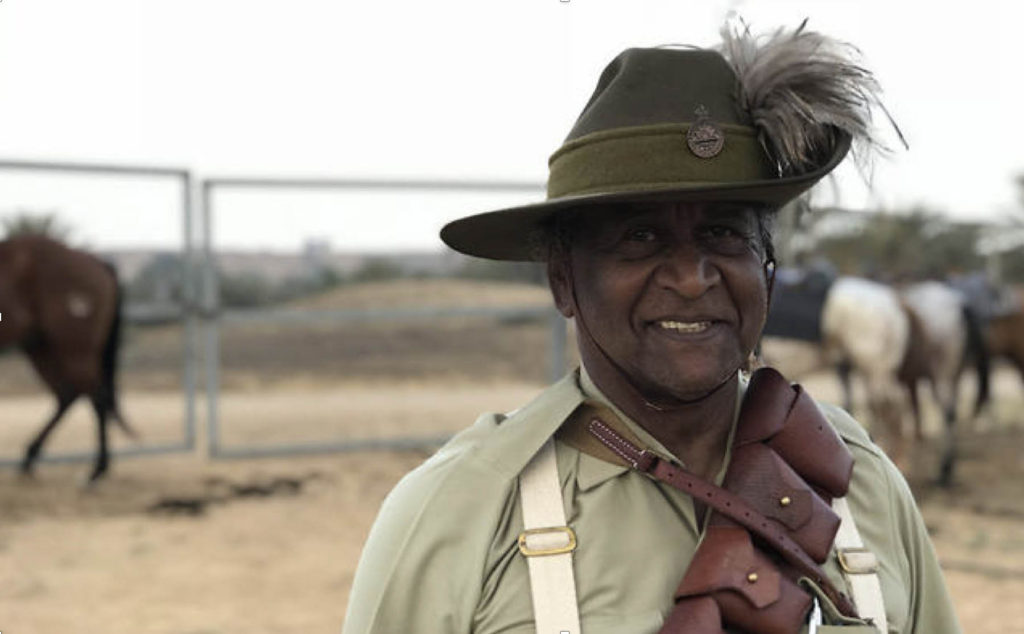 Sadly, many of the over 1000 First Nations soldiers who fought in the First World War did so while, back in Australia, they were not even considered to be citizens. Indeed, any benefits that were accrued by non-Indigenous soldiers through their war-time service, including land grants, membership in returned service clubs, and being named on memorials, were not given to the men in such units as the Queensland Black Watch. It was left to the First Nations communities to remember those who served and those, especially important on Remembrance Day, who made the ultimate sacrifice. Close to 150 First Nations Australian men died in the 1914-1918 war.

One such person was Trooper John Johnston. He embarked on the same ship as John Geary and James Lingwoodock, and was also a part of the reinforcements to the 11th Light Horse Regiment. Unlike Geary and Lingwoodock, however, John Johnstone never made it home. He was a station hand at Winton in Central West Queensland and was initially rejected for service because, at the time, people who were not of any European descent were excluded from joining the AIF. Later in the war these rules were relaxed to a degree, but it wasn’t until 1949 that the policy of exclusion was formally repealed. The Australian War Memorial details what happened to John Johnstone:

“The 11th Light Horse had moved into the Jordan Valley where it was defending the crossing points over the Jordan, and where it had been subjected to hostile artillery shelling for around a week.

On the afternoon of 1 June 1918, the enemy again shelled the 11th Light Horse. Johnston was with a group of men leading their horses when he was struck. He was rushed to the nearest field ambulance, but his wounds were mortal, and he died on admission.

John Johnston was initially buried at Jericho Cemetery, but was later interred at the Jerusalem War Cemetery, where his remains lie today beside over 2,400 other allied casualties of the First World War.”

In Queensland, indeed in the boundaries of our Diocese, an effort is being made to acknowledge the sacrifice and service of our First Nations soldiers. At Burleigh Heads, within an ancient and protected Bora Ring, sits the Yugambeh War Memorial, a large rock decorated with totems and bearing an inscription. This inscription reads, in part, “We honour those who served in the armed forces and those who made the supreme sacrifice. The symbolism of this rock serves to highlight the role played by First Nations Australians in defence of this country.” 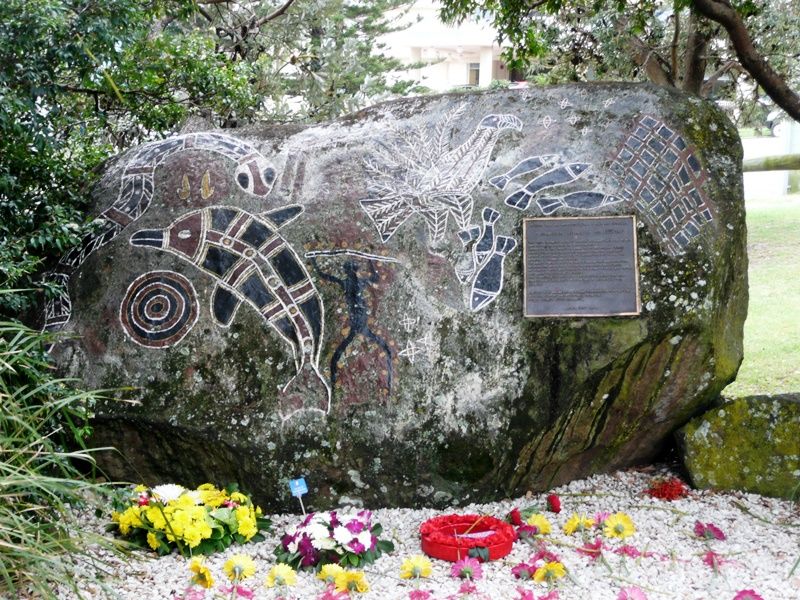 John Geary and James Lingwoodock’s joint wedding at St Luke’s Mission Hall in 1917, and the supreme sacrifice made by their comrade John Johnstone, serves as a reminder of the vital role that First Nations soldiers have played in the history of our country. During NAIDOC Week and on Remembrance Day, we should pause to acknowledge these First Nations service people, along with all who served, and especially those who never came back. 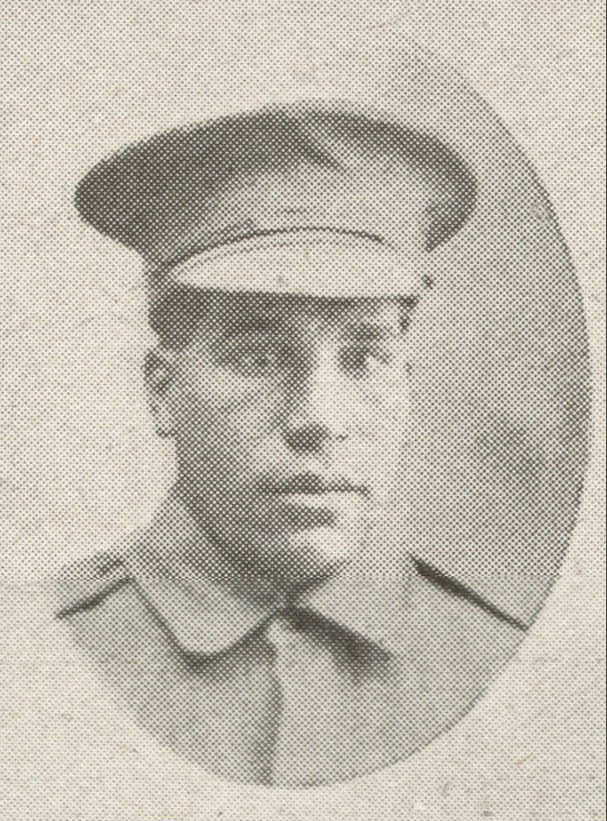 John Geary, 1917 (Image courtesy of the State Library of Queensland) 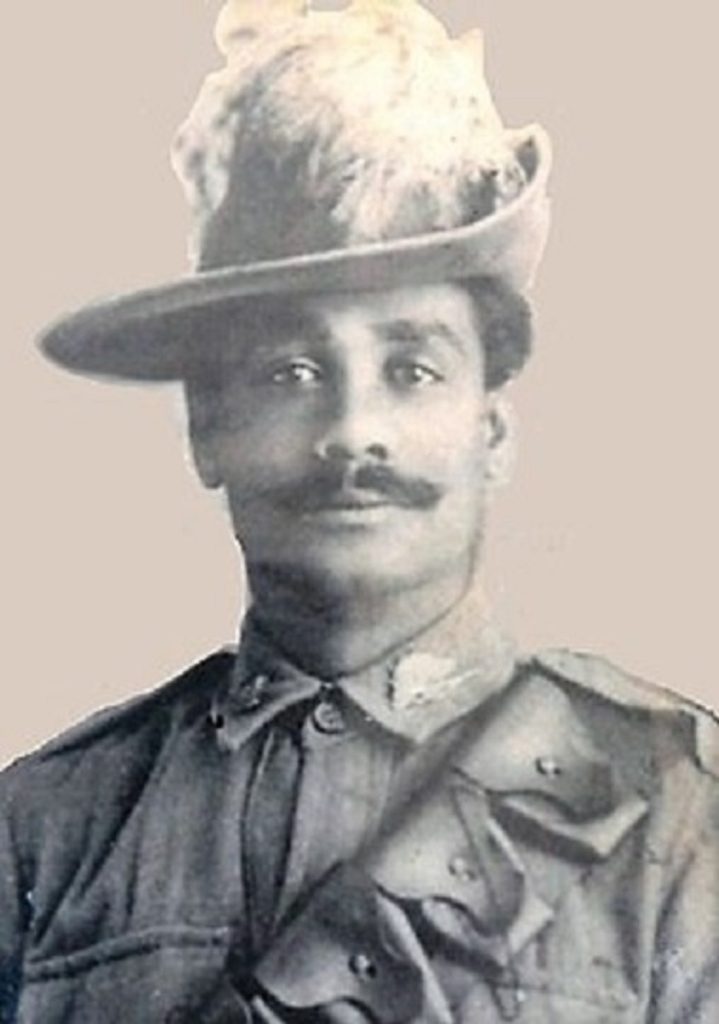