Visitors to St Martin’s House, at the Cathedral Precinct on Ann Street, may observe the plaque just outside the doors to the building’s reception, noting its past history as a hospital. Formerly known as “St. Martin’s War Memorial Hospital”, the building was completed in 1922 and commemorated the fallen in the First World War. 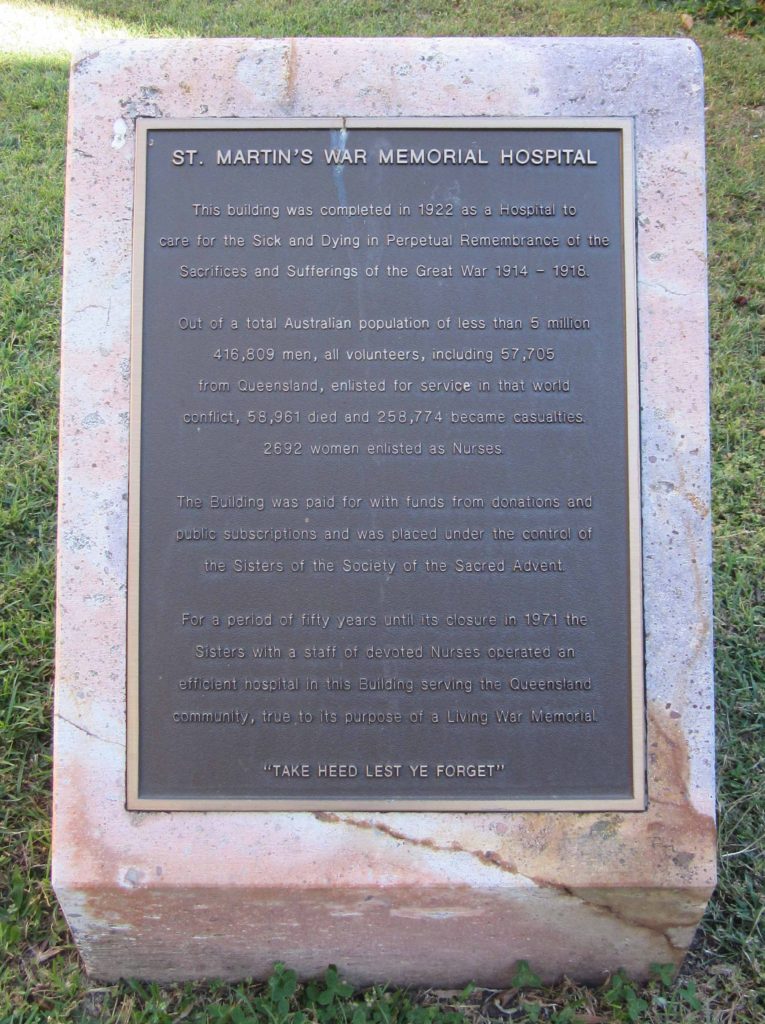 What many may not be aware of is that there was a hospital on the same parcel of land, stretching from Ann Street to Adelaide Street, prior to the construction of St. Martin’s War Memorial Hospital. 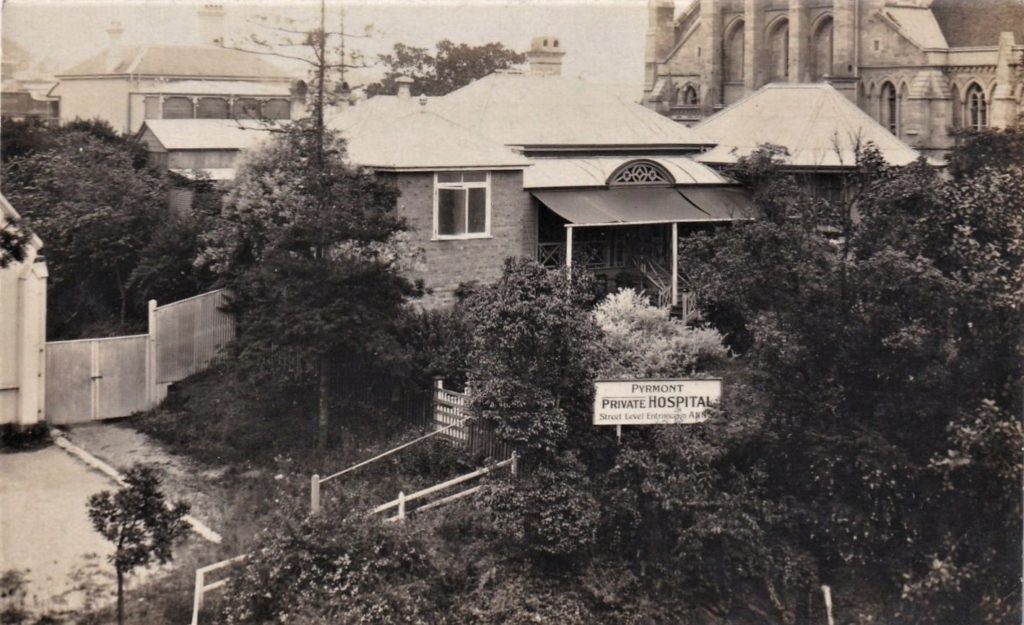 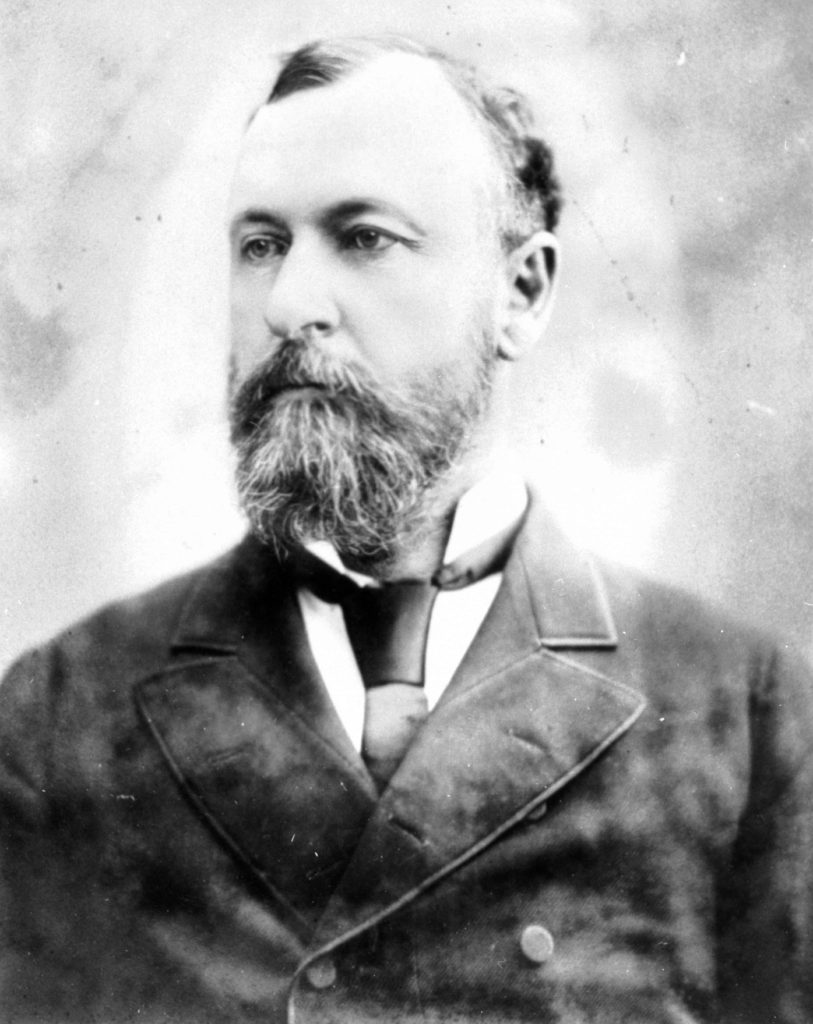 In March 1906, Glasgow-born lawyer Thomas Macdonald-Paterson, the owner of Pyrmont House on Adelaide Street (near the corner of Wharf Street), passed away. Macdonald-Paterson was a member of the Legislative Assembly of Queensland before being elected as the Federal Member for Brisbane from 1901 to 1903. The Macdonald-Patersons had moved into Pyrmont House around 1895. There are many references in newspaper articles and gossip columns noting visitors and events at the house. 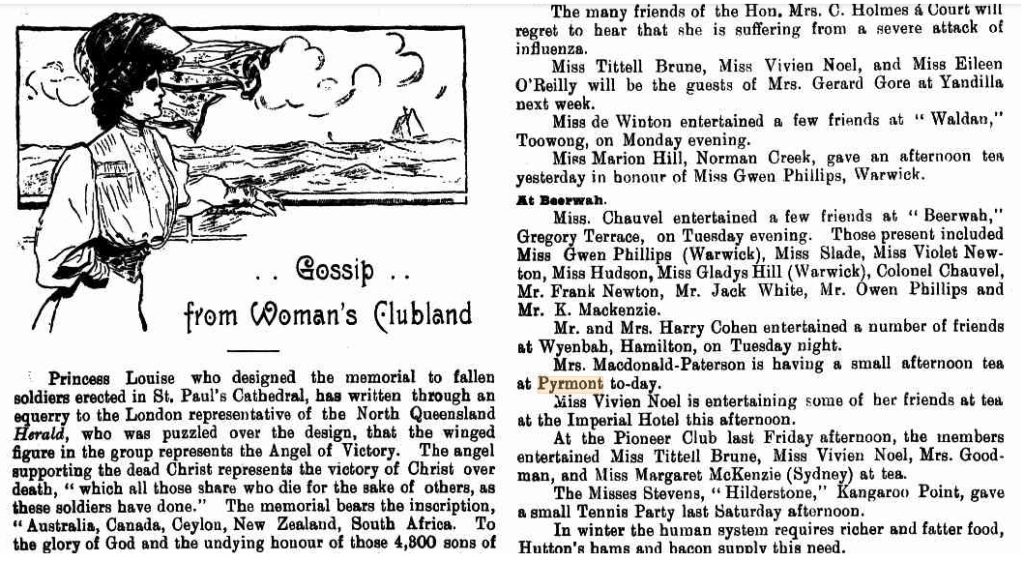 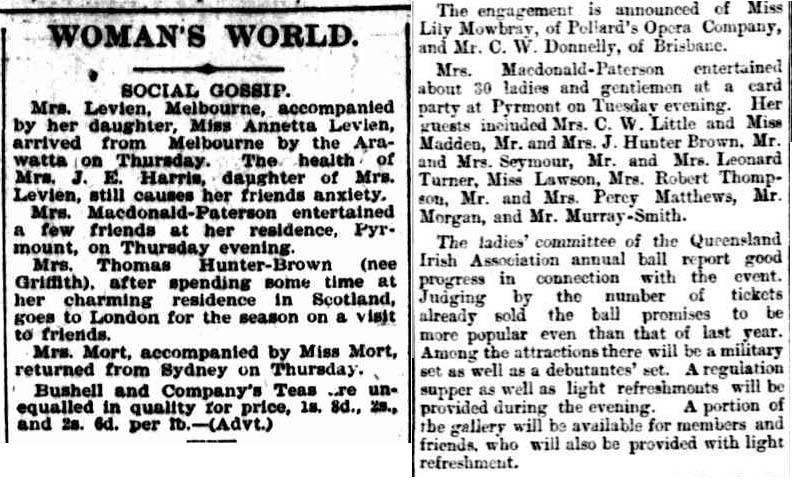 On 17 August 1908 Thomas’ wife, Maria, passed away. Following her death there was speculation as to what would happen to this historic house, which was built during the 1860s. The Cathedral Chapter (focusing on the completion of the first stage of the Cathedral) discussed the purchase of the property and the land between Ann Street and Adelaide Street. The Trustees of the property asked for 4,000 pounds. After inspecting the property and discovering that the purchase would have to include the furniture, the Chapter decided to withdraw from negotiations. 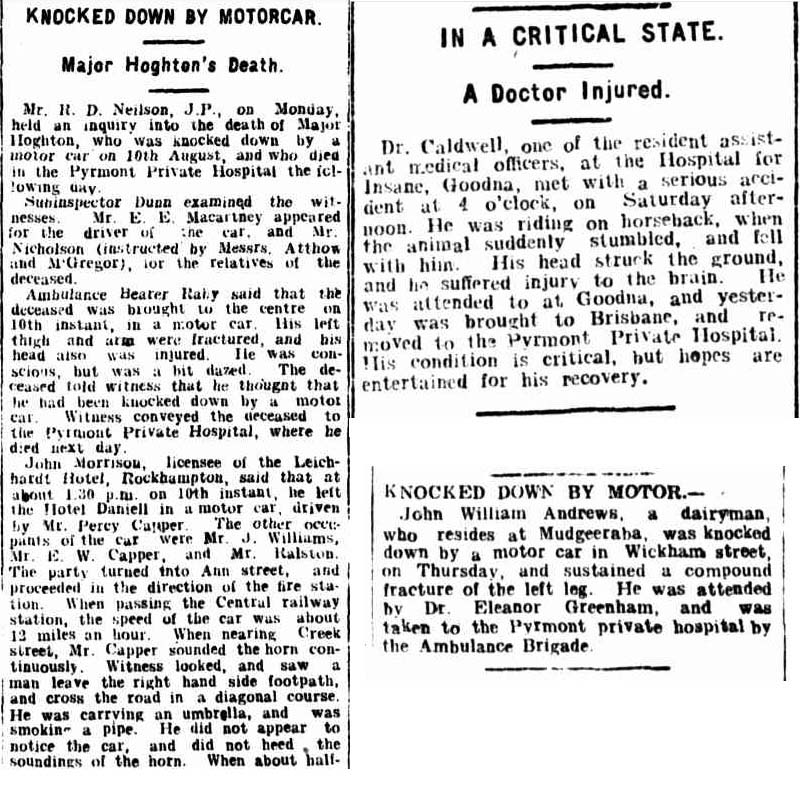 For a brief period the house was used as a boarding hostel. Around 1910, a doctor and his wife moved into Pyrmont House, retaining its name, and transformed it into a private hospital. The new hospital also incorporated  accommodation for nurses on Ann Street, situated approximately where the car park in front of St Martin’s House is now. The private hospital operated for the next six years. Although it had limited beds, it appears to have been well regarded and took in patients with common illnesses, as well as injured horse riders and motor vehicle accident victims.

Although the Chapter had not yet purchased the Pyrmont Private Hospital in 1908, it still had its eye on the hospital and its surrounding land. In June 1913, a sub-committee, including the Archdeacon of Brisbane Francis de Witt Batty, was established to “enquire fully into the matter and report, and also to make some suggestion as to how the proposed be financed”. A purchase price was noted in October for 5,000 pounds. Later, an agent for the property owner asked for 7,000 pounds, but it was not until 1916 that the Chapter decided to act.

Pyrmont Hospital Properties: details regarding Titles and Plan (Image from the Records and Archives Centre, ACSQ)

In September 1916, the agent offered 8,000 pounds for the Pyrmont Private Hospital property (and the land and nurses’ quarters on Ann Street), although the agent did note that a bid of 7,000 pounds might be accepted. 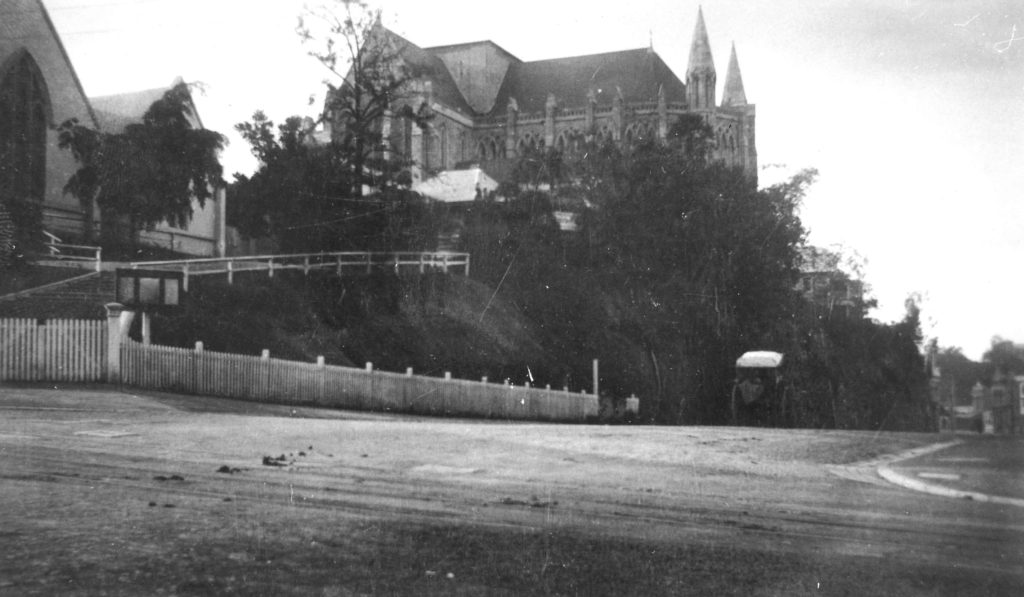 St John’s Cathedral from Adelaide Street with Congregational Church to the left and Pyrmont’s roof centre, circa 1912 (Image from the Records and Archives Centre, ACSQ] 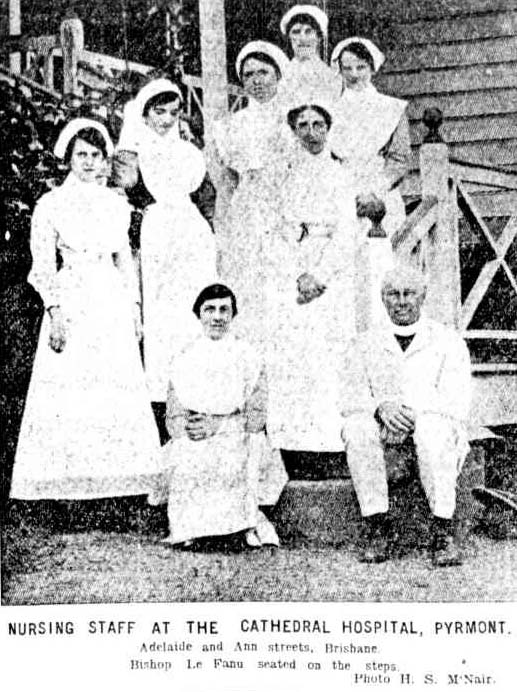 As part of discussions, Francis de Witt Batty interviewed the head of the hospital (a “Miss Ellen Mary Lowenthal”) who noted that her net profits from running the hospital were between 700 to 800 pounds a year. She also indicated that a purchase price more acceptable to the Chapter could be agreed to if the Chapter in turn allowed the hospital to continue operating in some form under their ownership.

In the end, a final purchase price was agreed to, which, with legal and other expenses, led to 7,681 pounds, 17 Shillings and four pence being paid. The Chapter agreed that the Sisters of the Society of the Sacred Advent would run the hospital on a rent of 600 pounds a year. 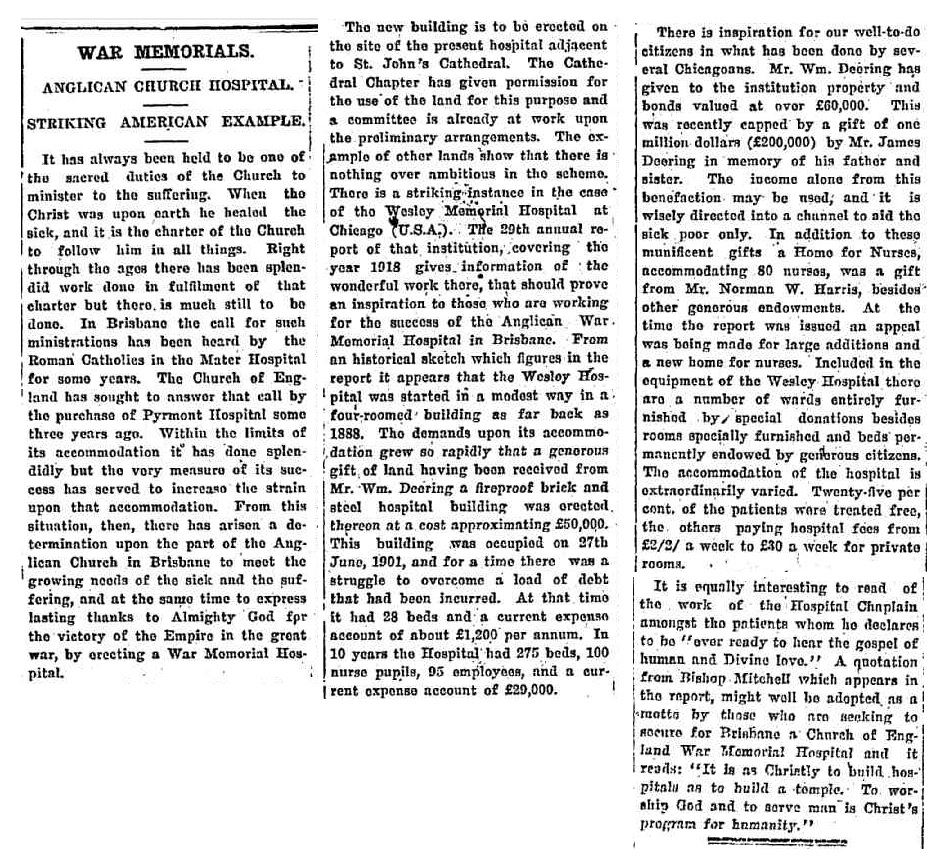 By this stage, the horrors and suffering of the Western Front in France were becoming all too real for Australians. After the Armistice on 11 November 1918, the Diocesan Council passed the following motion:

“In recognition of the fact that the basic principles of Christianity have been immutably upheld by the blessed gift of peace…The Church should, by some overt act of thanksgiving, raise a permanent memorial to the Glory of God as a mark of gratitude to Him and to those who have fought and died in the cause of righteousness.” 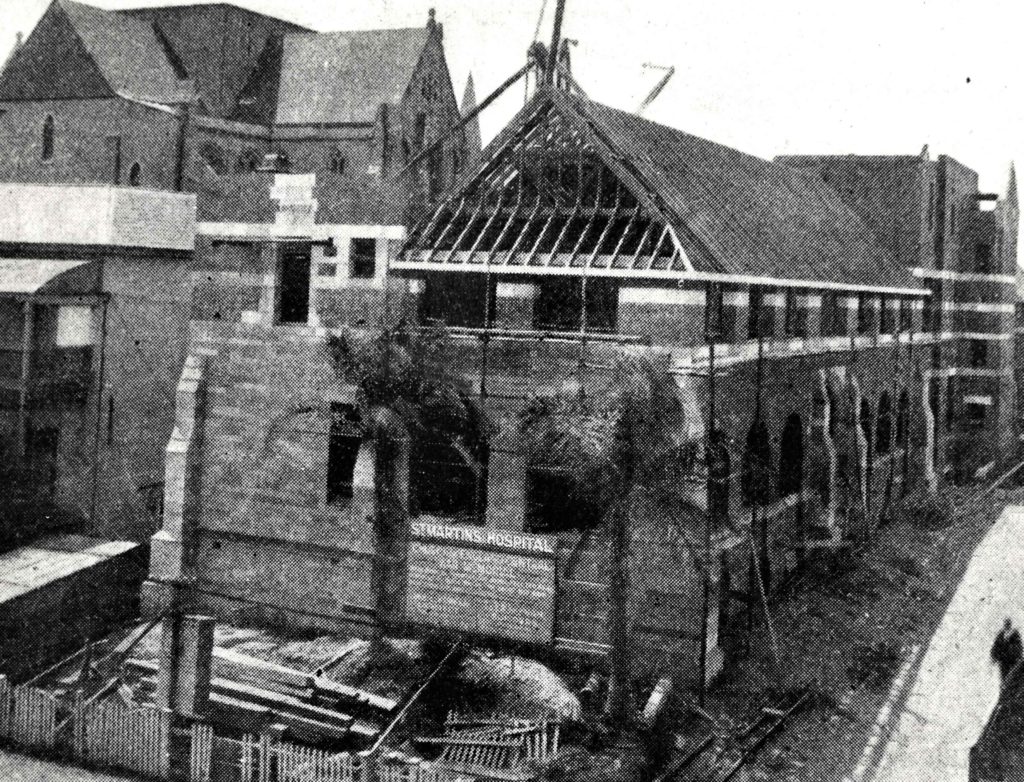 There was much discussion as to whether the permanent memorial should be an extension and enlargement of the current hospital, or a new building, or as part of the construction/completion of the Cathedral, or the purchase of additional lands between the Cathedral and Wharf Street. On 13 February 1919, the Diocesan Council agreed that the memorial should take the form of a new hospital.

It was also agreed that additional property between the Cathedral and Wharf Street should be acquired. This land was purchased for 13,500 pounds in February 1920. Both decisions were supported by the Cathedral Chapter. A War Memorial Committee was established, later becoming the Building Committee of St. Martin’s War Memorial Hospital, with Miss Stella Bruce-Nicol performing the role of Committee secretary. “St. Martin’s” was chosen as 11 November (Armistice Day) is commemorated as St Martin’s Day. 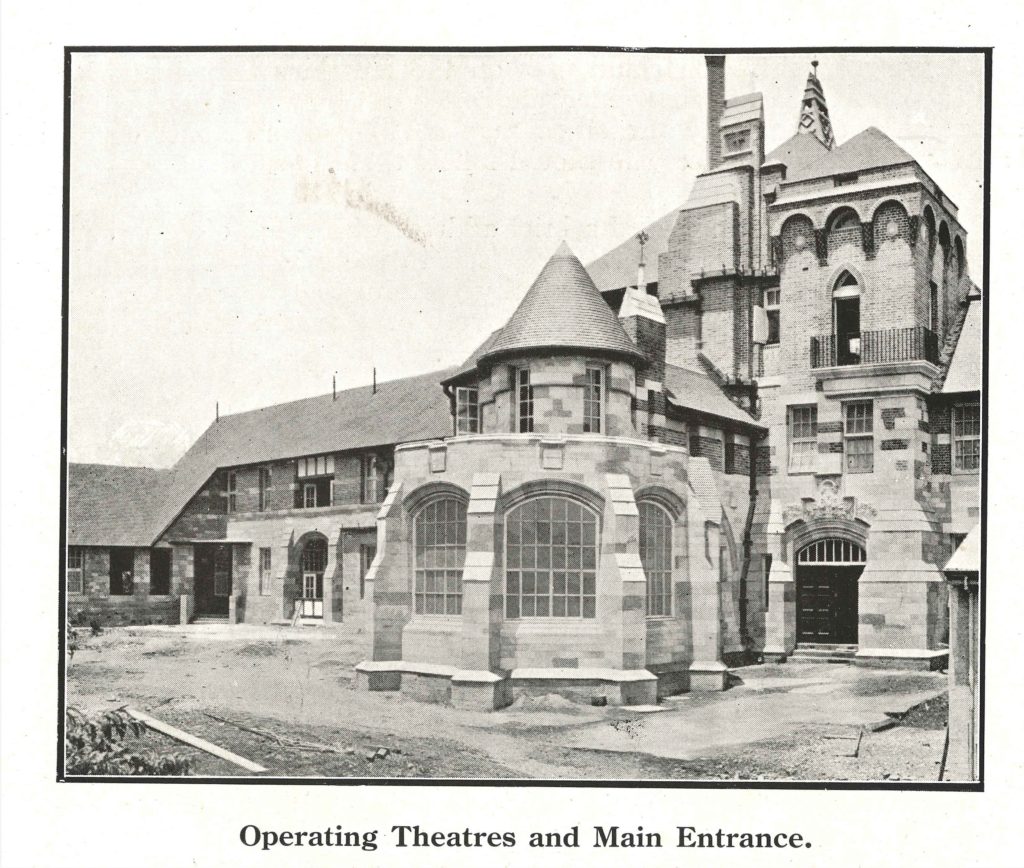 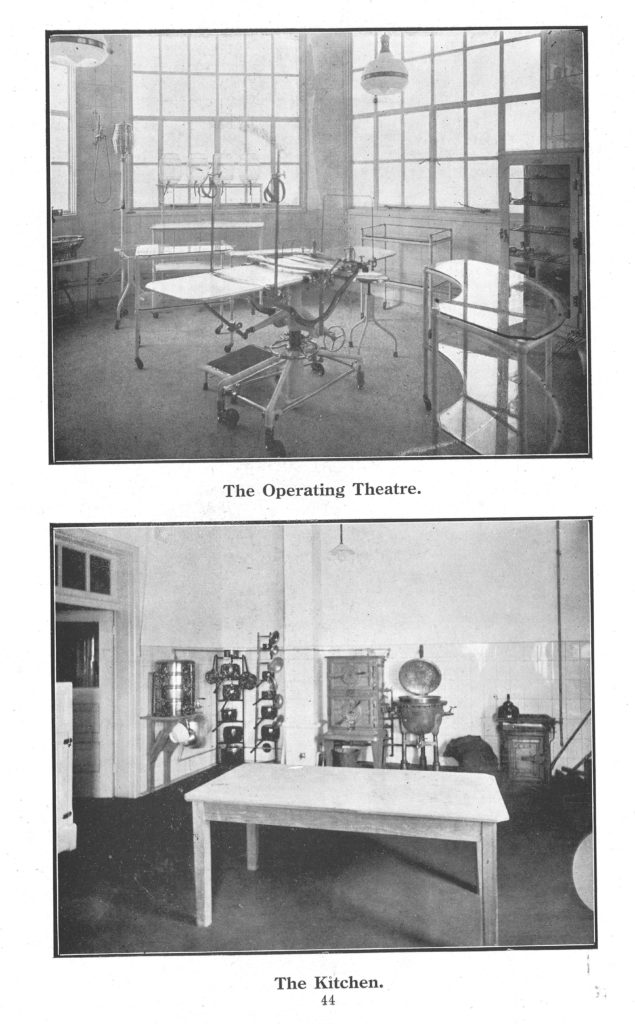 Images of the operating theatre (now the Dean’s office) and kitchen at St. Martin’s War Memorial Hospital (Images sourced from The Making of St. Martin’s Hospital, published in 1923)

Fundraising began with an initial aim of 50,000 pounds. The purchase of the additional lands raised the required amount to around 85,000 pounds. Special events, such as the laying of the foundation stone on 9 November 1919 and the contribution of many groups throughout Queensland (particularly the St. Martin’s League) ensured that the hospital, when opened, was free of debt. However, the money used to purchase the additional land still had to be paid. The original Pyrmont Hospital building had been sold for 491 pounds and 11 shillings in March 1920 and dismantled by Silk and Sons Pty Ltd. In the month prior, nursing staff and patients were moved to a temporary location on Wickham Terrace. 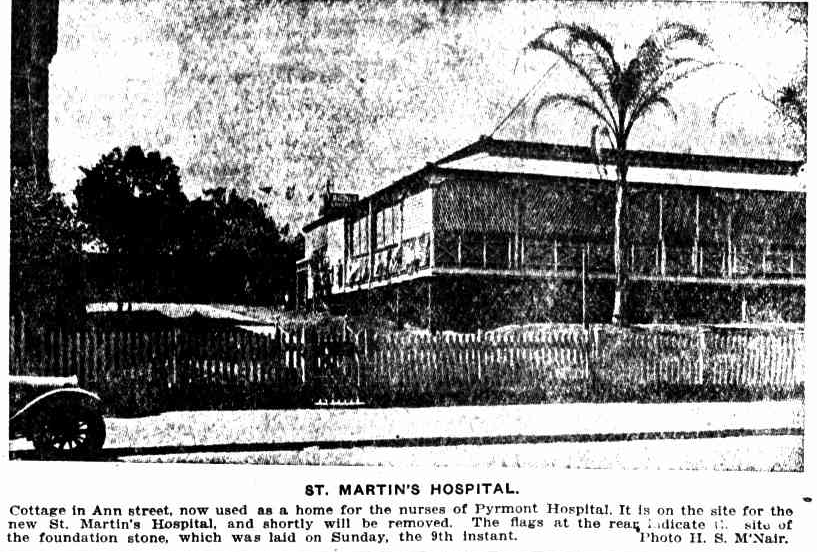 Today, St Martin’s House still serves a vital role for the Cathedral and our wider Diocesan community. Its role as a hospital ceased in 1971, and after much debate about its future, it was renovated and is now used as office space for our Archbishop, Regional Bishops and clergy and staff for the Cathedral and various Commissions.

There are still some mysteries that my research is yet to solve. One is the location of the foundation stone for St Martin’s House. The above photograph indicates that it was laid just behind the nurses’ quarters. 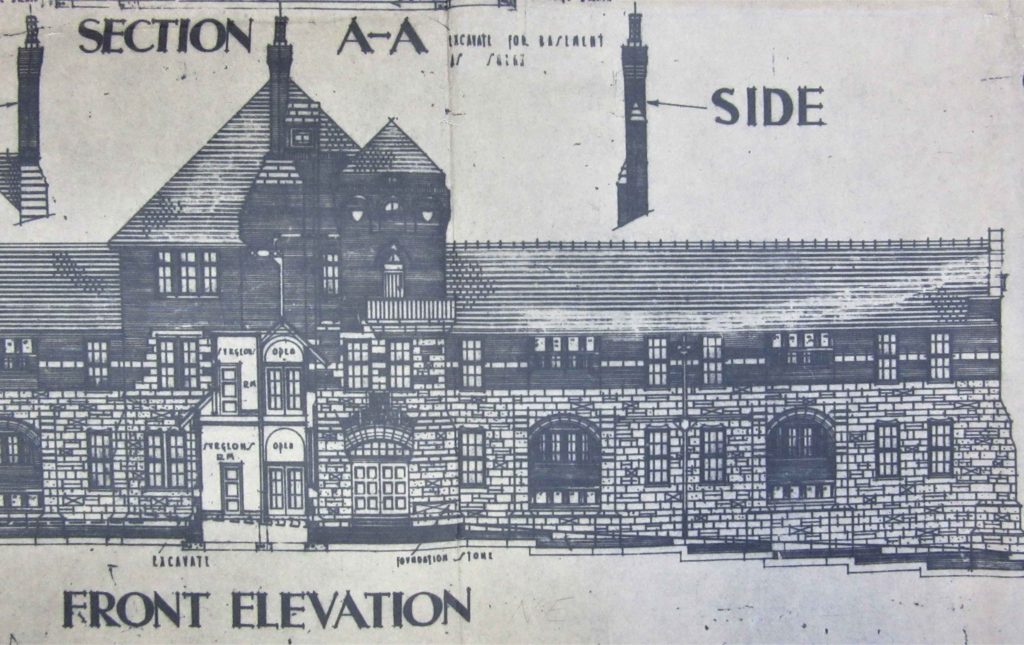 With the purchase of additional property between the Cathedral and Wharf Street, the planned location of what is now known as St Martin’s House moved further east, meaning that the nurses’ quarters (unlike Pyrmont Private Hospital previously) were not immediately dismantled. There are indications that the stone was moved and placed in a recess next to the entrance, which is supported by one of our plans for St. Martin’s War Memorial Hospital from the original architect, Lange Powell. However, we have been unable to locate anything else to support this.

The plaque outside what is now knows as St Martin’s House, commemorating the former role of the building, notes the following at its base:

These words ask that we remember the sacrifice that Australians made in the war. In terms of the foundation stone, when true history is forgotten or unrecorded, mysteries and urban legends can often propagate. I am working with Cathedral staff and volunteers on the location of the stone and its contents, so it is hoped that this mystery will be solved soon. 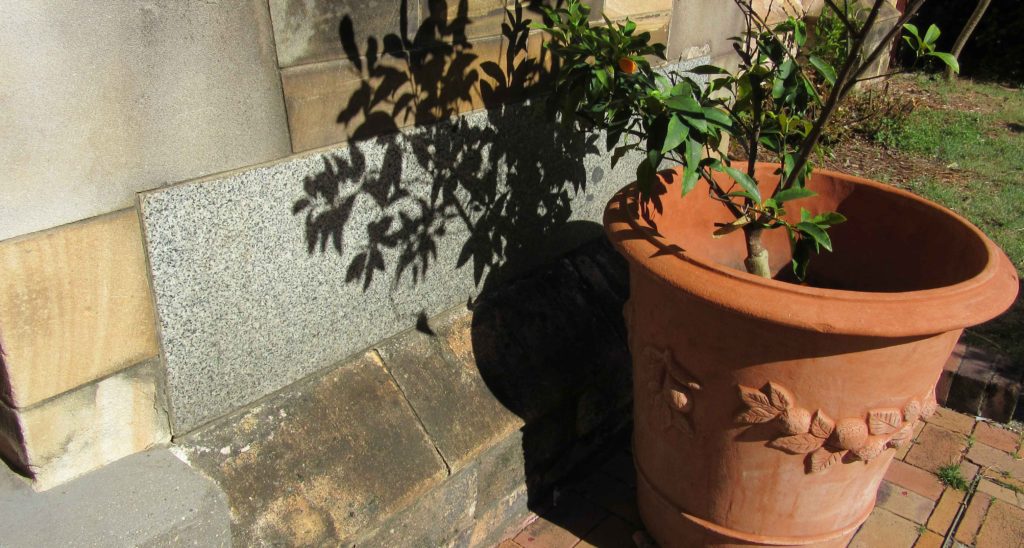