November saw a precious piece of history being returned to The Parish of Nundah in the form of an antique silver rose bowl, which was presented to parishioners Mr and Mrs Paterson 101 years ago.

“as a token of the esteem and gratitude of the congregation, remarking that what impressed him most about the work of them both that it was the work of really consecrated people.” 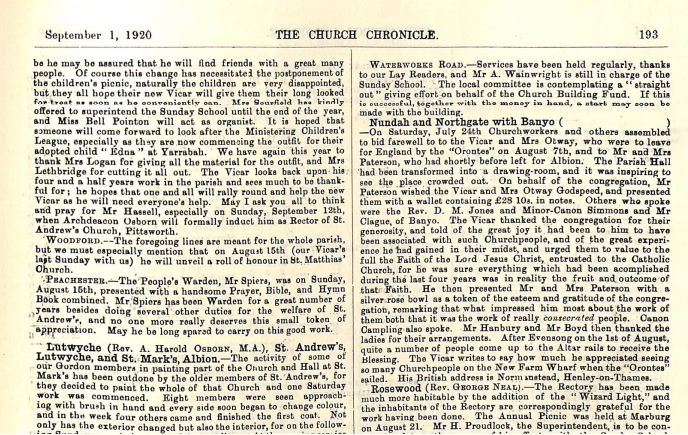 The rose bowl has certainly been on a journey since 1920. It was donated to the op shop of St John the Evangelist Anglican Church in Gordon, Sydney and then passed on to the Nundah Historical Society by the thoughtful op shop team. Margaret Prowse of the Nundah Historical Society kindly returned it to our parish. It is resting in its new home in the Lady Chapel at St Francis Church.

“A large gathering of parishioners and friends assembled in St. Francis’s Parish Hall, Nundah, last Saturday afternoon to entertain the Rev. Mr. and Mrs. Otway on the eve of their departure for England. The room, was tastefully decorated with roses and sweet peas. Mr. Hood (rector’s warden) briefly outlined the object of the gathering, and Mr. Paterson presented Mr. and Mrs. Otway with a wallet of notes us a token of the high esteem in which they were held by the parish. The Rev. Morgan Jones and Canon Simmons also eulogised Mr. Otway’s good work in Nundah during the past four years. Mr. Paterson (the retiring warden) and Mrs. Paterson, who have left the district, were also entertained at the same gathering. The rector, on behalf of the parishioners, presented them with a silver rose bowl as a small token of appreciation. Other speakers were Canon Campling [St Francis’ College Principal], the Rev. Hanbury, and Mr. Boyd.” 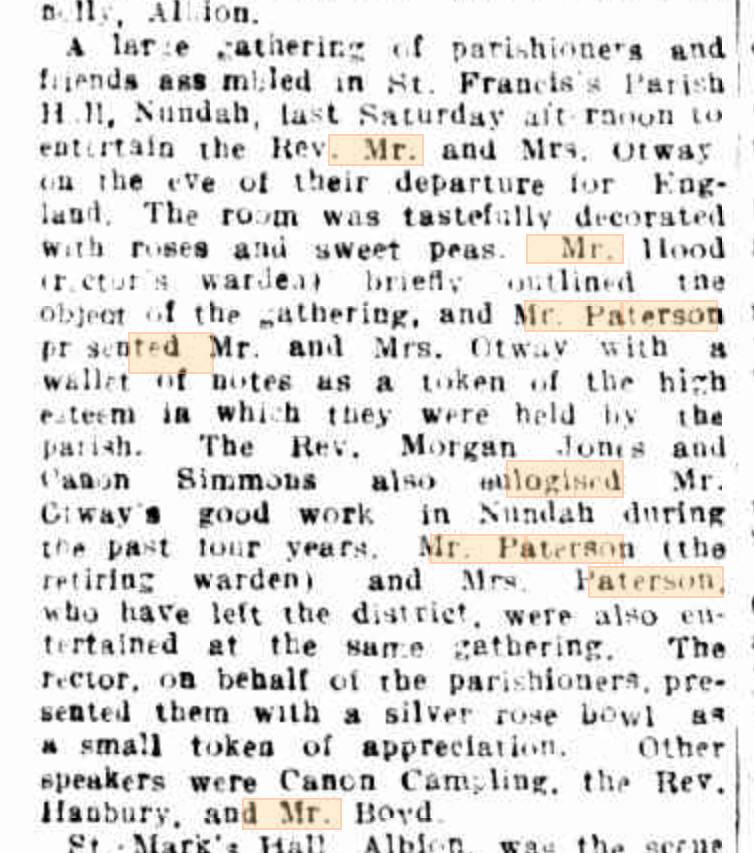 Sadly, correspondence with Michael Rogers from the Records and Archive’s Centre reveals that the Archives has little information on the Patersons, “as virtually all the early records from Nundah were destroyed in a parish hall fire.”

One of the speakers at the retirement ceremony was The Rev’d Canon William Campling, the then St Francis College Principal. At the time, the College was located on Buckland Road, Nundah, later moving to its current location in Milton. The former College chapel (now known as Church of the Holy Spirit) was moved from Buckland Road in 1936 to its current location on the corner of Olive and Imbros Streets after the College shifted to Milton. The church has heritage significance and is home to an active faith community, as part of The Parish of Nundah, to this day.

Earlier this month, our parish celebrated another occasion as our Deacon, The Rev’d Elizabeth Donald McConnell, was ordained to the priesthood at St John’s Cathedral. She is now serving as Assistant Priest to both The Parishes of Nundah and Banyo.

These parishes have shared a rich connection since the Banyo site was acquired back in 1918 and formed part of The Parish of Nundah. Banyo eventually became its own parish in 1974. Although separate parishes for more than 45 years, both Nundah and Banyo parishioners have continued to maintain close bonds of faith and fellowship.

Both parishes now embrace and look forward an exciting new chapter of ministry in the form of a shared clergy team consisting of The Rev’d Dr Graham Warren, The Rev’d Dr Imelda O’Loughlin and The Rev’d Elizabeth Donald McConnell.