Brisbane has seen many events and occasions that have literally stopped the city, including royal visits. Many would remember the visit of the Prince and Princess of Wales to Brisbane in 1983. A much earlier visit by another royal couple also stopped Brisbane. The couple took part in a special ceremony that had a lasting impact on the life of our Diocese.

When William Webber became the Bishop of Brisbane in 1885, he had a dream that the heart of our Diocese would be a Cathedral as grand as those in England. While Bishop Webber never saw the completion of the first stage, he was present for the laying of the foundation stone 120 years ago. 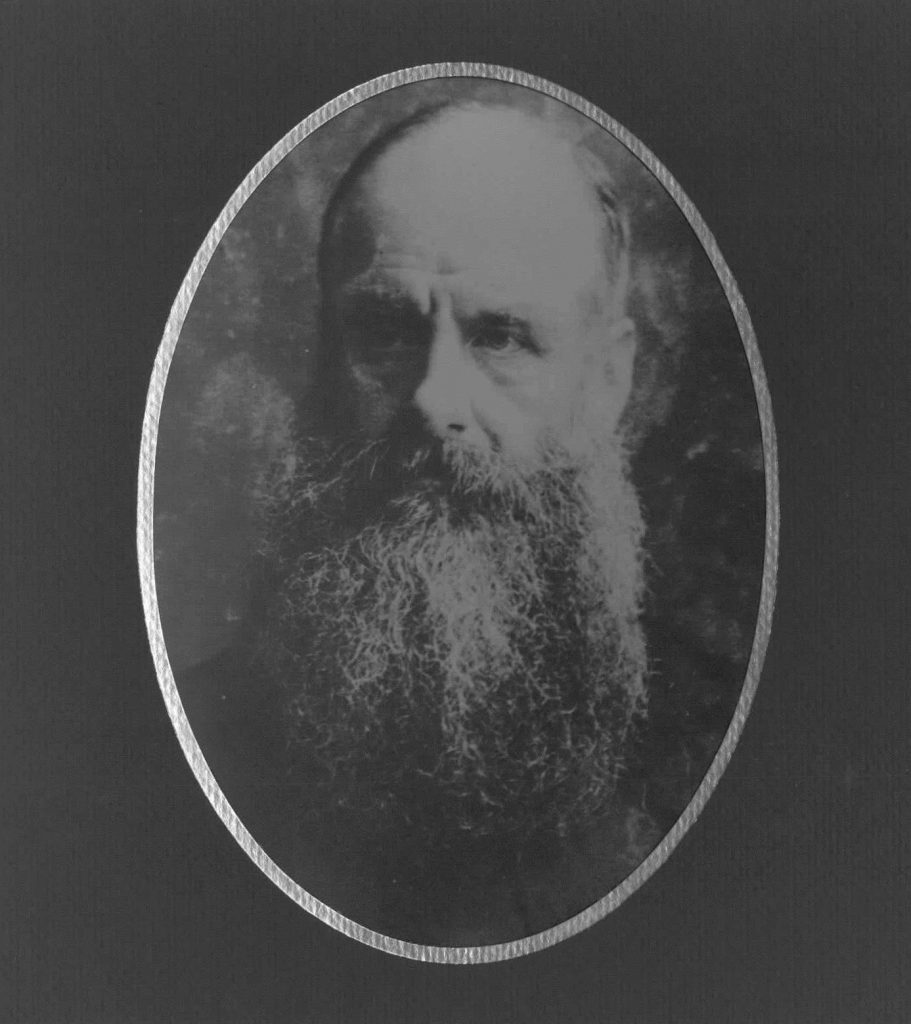 Bishop Webber’s vision for the Cathedral was inspired, in no small part, by the Cathedral of the Blessed Virgin Mary in Truro, Cornwall. Wanting a similar design, Webber contacted John Loughborough Pearson, who had designed the Truro Cathedral in the neo-Gothic style, and asked him to develop the architectural designs to fulfill his vision. 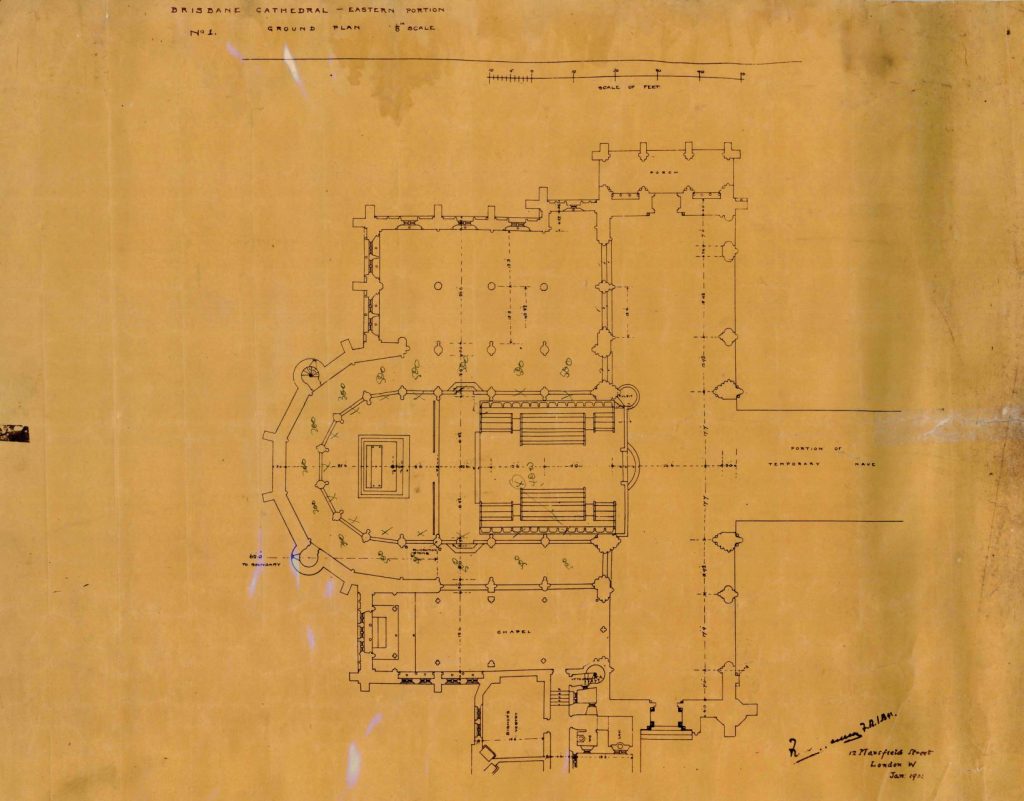 Ground (floor) plan of the eastern portion of St John’s Cathedral (1903). The foundation stone is marked below and to the right of the altar (original plan is held by the Records and Archives Centre, ACSQ) (CADR1)

The next step was to raise the necessary funds to pay for the Cathedral. Webber did this with a great deal of success, travelling frequently to the UK and raising money by giving speeches and spreading the word by touting through the press.  It is estimated that in today’s terms, he helped raise the equivalent of $17 million. 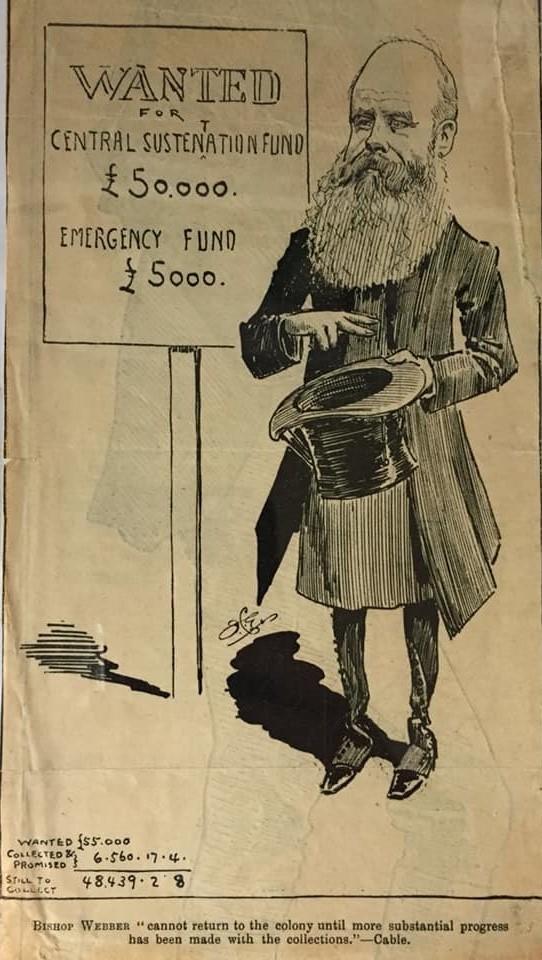 After much travel and fundraising, the time came for the foundation stone to be laid. Hearing of the forthcoming visit to Australia by the then Duke and Duchess of Cornwall and York (later King George V and Queen Mary), Webber arranged for the royal couple to attend the ceremonial laying of our Cathedral’s foundation stone.

Needless to say this event captured the public’s imagination and fevered preparations began to take place. Demand to attend the laying of the foundation stone was so great that it was decided to move the event to earlier in the day. This would allow for those attending the ceremony to then follow the Duke and Duchess to the Brisbane Agricultural Show that was scheduled for the afternoon. 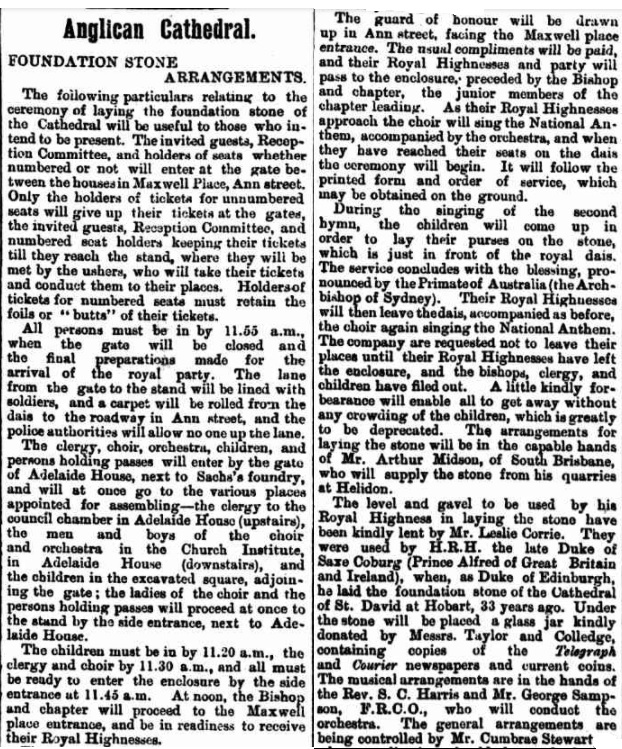 On 22 May 1901 the Duke and Duchess arrived by the river and made their way up to the ceremony. A specially constructed stand was erected for the day. The stand was built to take around 1,800 people. Of these, 250 seats were reserved for clergy, invited guests and dignitaries, with the remaining seats sold to the public for five shillings each. The Bishop wanted to make sure that children were invited and were welcome; however, it was only those who had a donation of £1 or upwards that would be admitted ‘for free’ and be allowed to march past the dignitaries, presenting a small purse to Canons Osborne and Matthews who were standing on the main platform. All donations made on the day went to the building of the Cathedral. 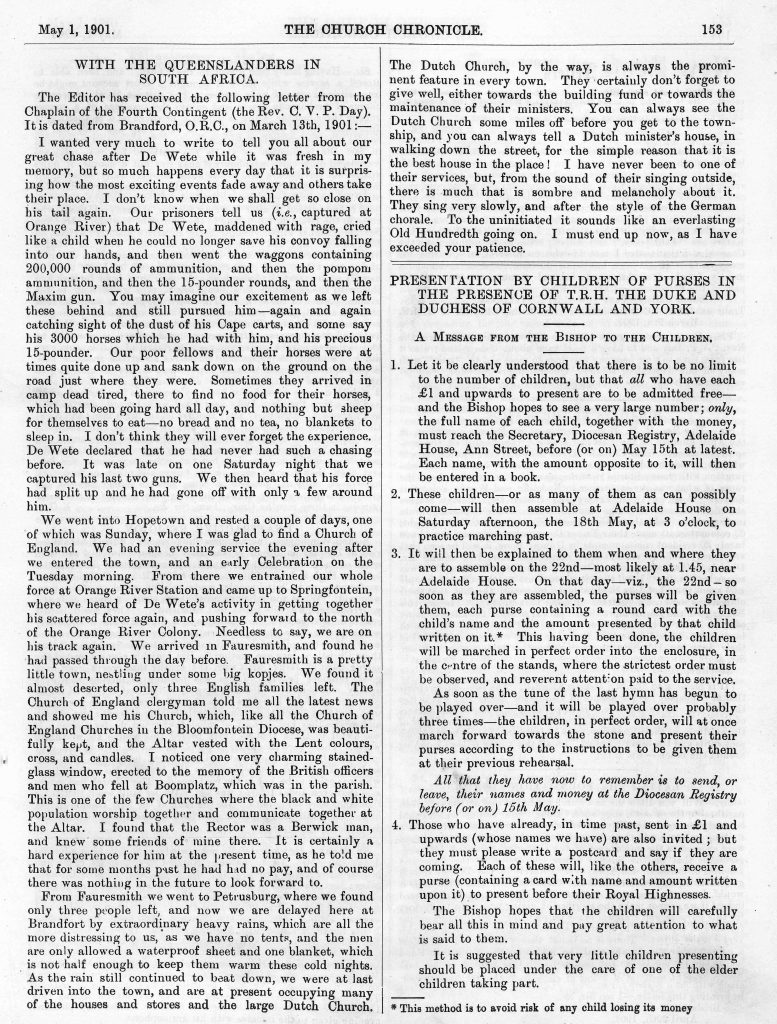 Message from the Bishop to the children attending the laying of the St John’s Cathedral foundation stone, published in The Church Chronicle on 1 May 1901

Bishop Webber made sure that the children knew what was expected of them by publishing a letter in the May edition of The Church Chronicle, noting the time of assembly and that each child should bear any instructions in mind and pay great attention to what is said to them, and that any very young children should be under the care of an older child. 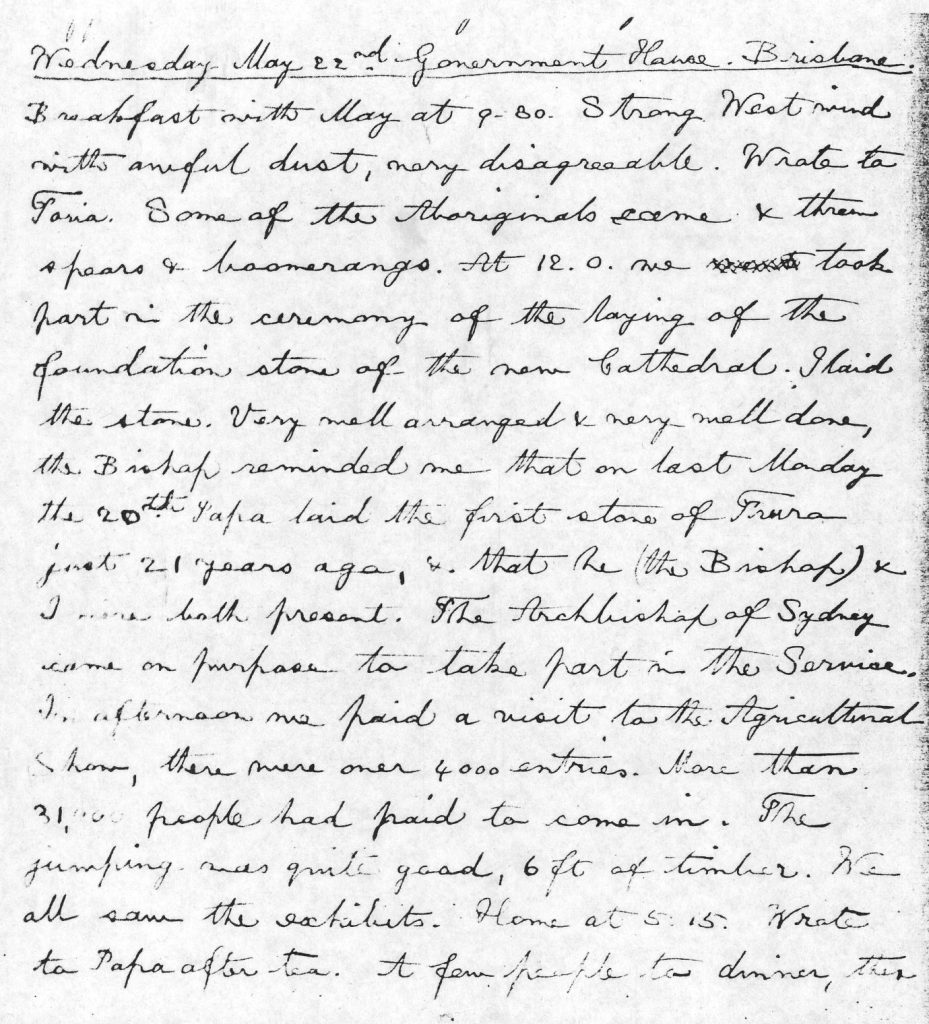 Diary entry for the Duke of Cornwall and York, noting the events of the 22 May 1901 when the St John’s Cathedral foundation stone was laid (Original held by the Royal Archives in Windsor)

This was a glittering affair for the time, with the whole city focusing on the small area of land on Ann Street. The ceremony itself, also attended by the Archbishop of Sydney, went very smoothly, with the Duke noting in his diary that the ceremony was “very well arranged and very well done”.  The photo below clearly shows Bishop Webber (the white bearded gentleman) just to the left of the stone pulley wheel.

The ceremony of the laying of the St John’s Cathedral foundation stone on 22 May 1901, with Bishop William Webber on the left, the Duke of Cornwall and York centre and the choir in the stands

Around 300 children crammed into the enclosure in order to hand over their contributions, said to total £459. Thankfully some of the silk purses used by the children made their way to the Records and Archives Centre collection and remain in very good condition. 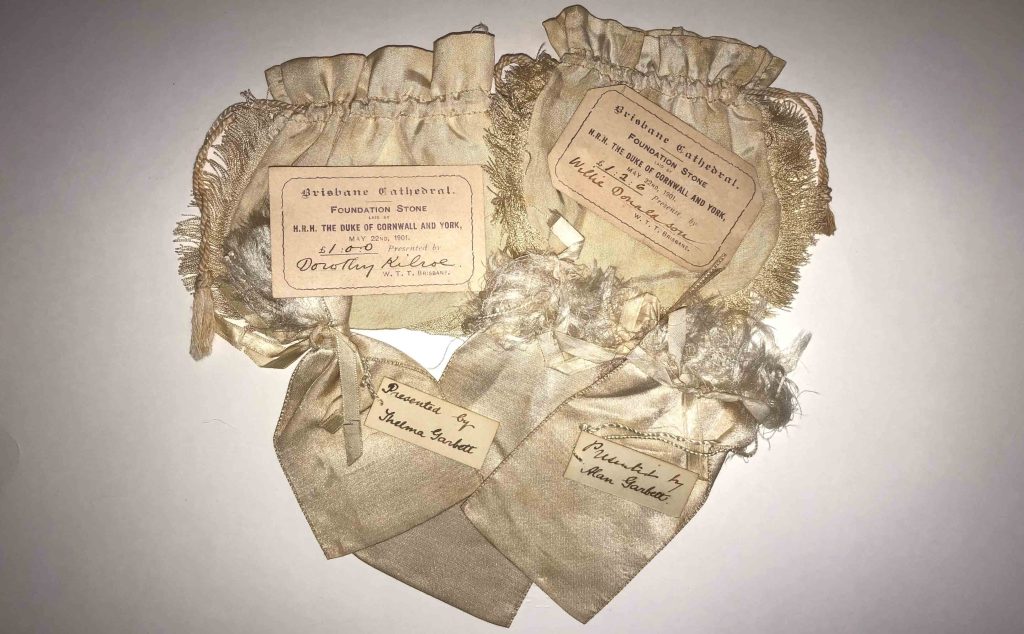 As part of the ceremony, the Duke used a ceremonial level and mallet (currently on display in the Arnott Reading Room in the Records and Archives Centre). The mallet was used to lay the foundation stone for Hobart’s St David’s Anglican Cathedral in 1868 – and continued to be utilised by our Diocese for similar events, including the laying of the Stone of Remembrance at St John’s Cathedral by Field-Marshall Viscount Montgomery in 1947. 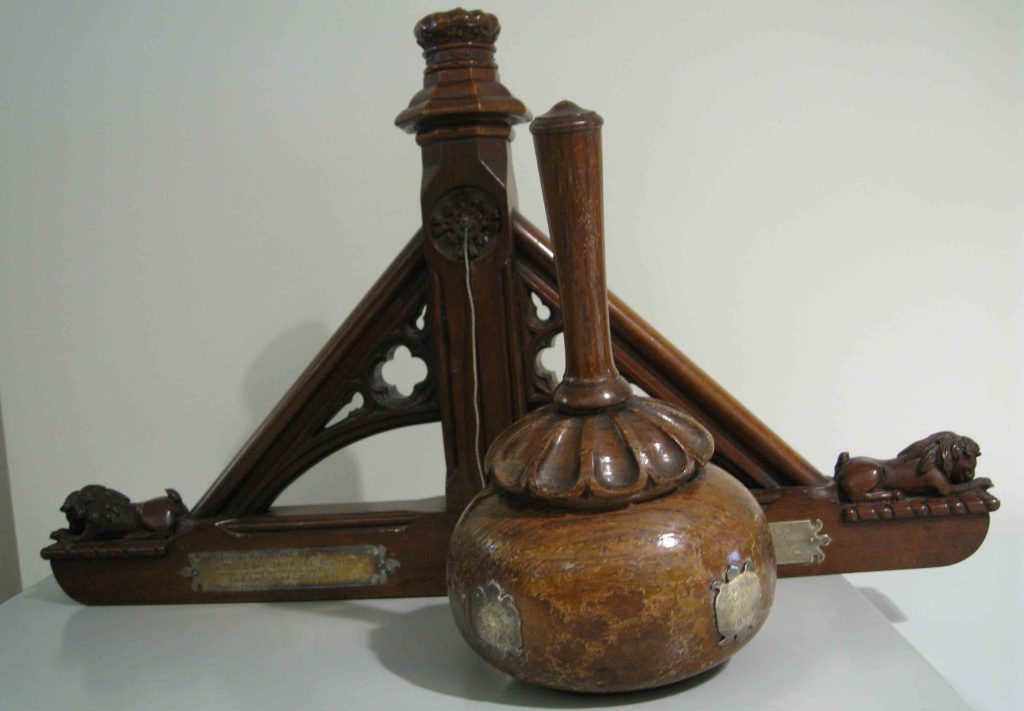 As part of the laying of the St John’s Cathedral foundation stone ceremony, the Duke of Cornwall and York used a ceremonial level and mallet (currently on display in the Arnott Reading Room in the Records and Archives Centre)

After the procession of the children and the ceremony’s closing, the Duke and Duchess travelled to the Brisbane Agricultural Show (now of course affectionately known as the ‘Ekka’) where over 31,000 people paid to attend on the same day as the royal couple.

With the ceremony completed, the hard work of constructing the first stage of the Cathedral commenced. Sadly, Webber did not get to see the start of this construction. After making one more fundraising trip to England in 1901 to 1902, he returned in failing health and passed away in 1903. He was buried at Toowong Cemetery; however, this was not to be his last resting place.

Upon the completion of the first stage of the Cathedral in 1910, Webber’s remains were exhumed. On 21 September 1910 he was re-interned below the Cathedral’s altar, just five weeks before Archbishop Donaldson consecrated the Cathedral on 28 October. He remains the only person whose body (entire) rests in the Cathedral. 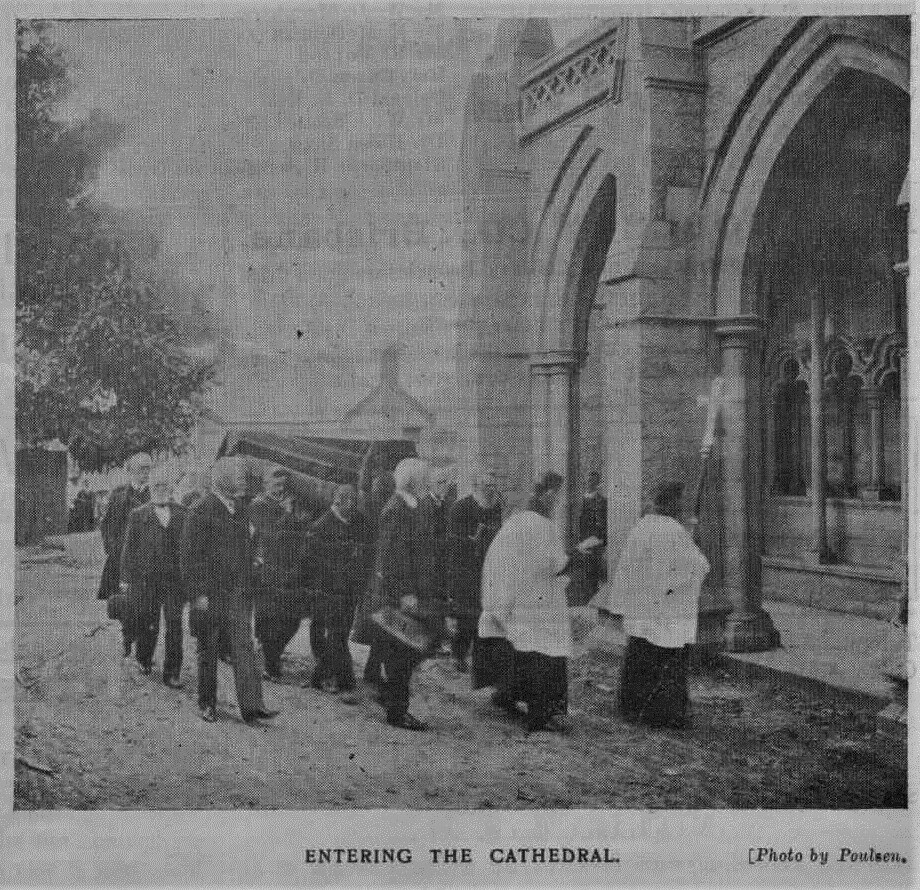 When the first stage was completed in 1910, it must have seemed a little out of place in the then dusty streets of Brisbane. By the completion of the third stage in 2009, our Cathedral had become surrounded by high-rise buildings. Despite this, it remains a truly remarkable example of neo-Gothic architecture. While many contributed to the funding and construction of this magnificent building, it is entirely fitting that the sole resident (other than the Holy Spirit) should be the person who inspired its creation. 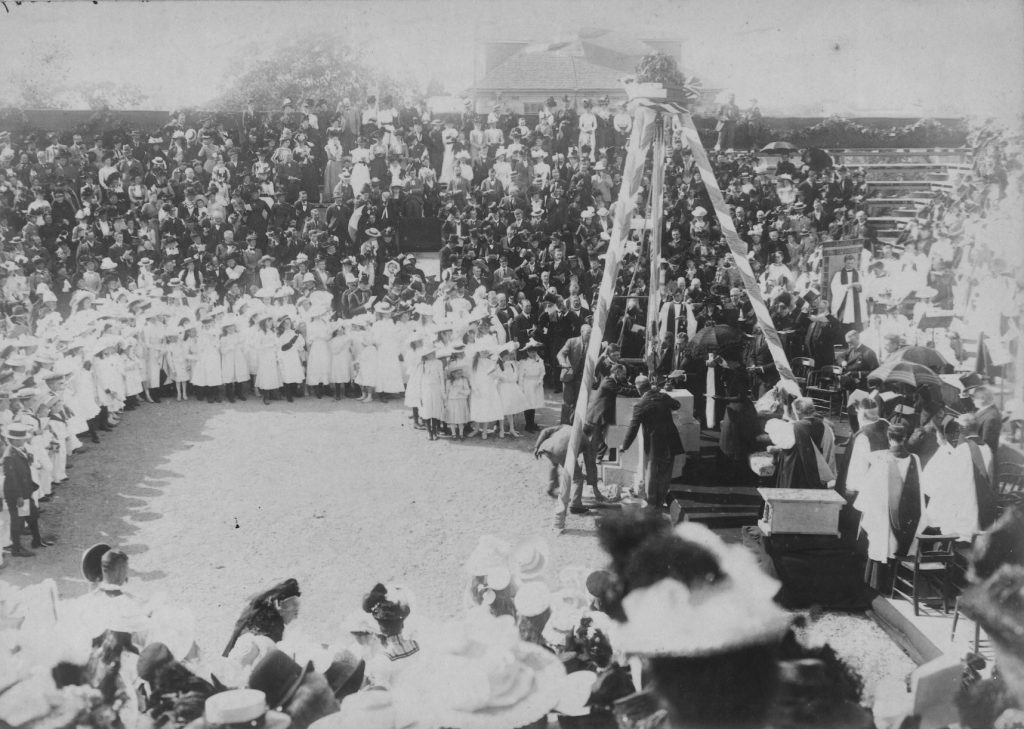 Children about to process past the Duke and Duchess of Cornwall and York to present them with purses at the laying of the St John’s Cathedral foundation stone on 22 May 1901 (Image courtesy of the Records and Archives Centre, ACSQ)

Author’s note: I am indebted to former Archives Researcher Adrian Gibb for his assistance with this feature, especially with the image selection. I would like to note my appreciation for all the work that Adrian has done for the Records and Archives Centre over the years, and I wish him the best in his new role in the Discernment and Formation team.