I was born in West Papua after Indonesia took control in the 1960s. I fled my homeland for Australia several years ago. West Papua was dangerous for me, in part because a loved one was a prominent community leader who courageously spoke up for West Papuan people’s rights.

When I left my family, they said “goodbye” to me – while I fled with their blessing, they expected not to see me again because the journey to Australia would be long and dangerous. I left West Papua with other Indigenous locals who also needed to seek safety.

In order to get to Australia we had to build a canoe. We travelled via a small motor boat at night from the mainland to a tiny and very remote island where we stayed to build the canoe. At night, we went deep into the jungle to cut down the trees and build it with simple hand tools. Most of us had never built a canoe before, so we worked under the direction of an elderly man. We respected him for his knowledge, experience and wisdom. He became a grandfather figure to all of us.

It took many months to complete the canoe on the island. In order to avoid arousing suspicion or getting caught, we limited our movements during daylight. We lived off fish, fruit, coconut and root vegetables. We shared everything we had.

While we were on the island building the canoe, we prayed and fasted in preparation for the journey, so we were spiritually and mentally ready. We knew that if we were caught by the Indonesian military that we would be tortured or killed. We also knew that we would likely have to contend with cyclones, pirates, sharks, thirst and hunger.

While we were on the island and before leaving West Papua, we did not communicate with our families because it was too risky. However, the night before we embarked for Australia, I contacted my family to let them know that I was leaving. I was anxious, not knowing whether I would see or speak to them again. They reminded me that while they could not be with me on my journey to protect me, that Jesus would be my comfort because he loves me. I was raised in a strong Christian family, and growing up I would always go to Jesus for hope and strength. During my journey, Isaiah 43 strengthened me, especially these verses:

“Do not fear, for I have redeemed you;
I have called you by name, you are mine.
When you pass through the waters, I will be with you;
and through the rivers, they shall not overwhelm you;
when you walk through fire you shall not be burned,
and the flame shall not consume you.
For I am the Lord your God…
Because you are precious in my sight,
and honored, and I love you.”

Because it took so long to reach Australia, my family thought that we had either been caught by the Indonesian military or drowned. I found out later that they had started planning my church funeral and wake.

The south of West Papua is closer to the Australian mainland than Tasmania is, so we hoped to be rescued by the Australian Navy within a day of our departure. However, we also knew that we risked being discovered by the Indonesian military or the Papua New Guinea authorities who were known to be corrupt at the time, with strong financial ties to Indonesia.

A few hours after embarking for Australia, our canoe’s motor broke down. Adrift in the ocean, we were unable to fix the motor. We drifted for days, with only sea water to drink and nothing to eat. It was very, very hot during the day and freezing cold at night.

Every day we had to contend with tropical thunderstorms. The canoe was lifted to the crest of huge waves before crashing, only to be lifted and crashing again and again. Instead of despairing, we cried out to God for help and prayed. Jesus had been faithful to us throughout our whole journey and so we continued to trust in him. When we were afraid, we prayed. When we were hungry and thirsty, we prayed.

We kept each other’s morale up by reminiscing. We shared stories about growing up, mostly stories to do with food. I shared about how I used to help myself to the Milo tin when Mum wasn’t looking and share it with my childhood friends. I talked about my mum’s cooking and how she prepared fried bananas for us in the morning, serving them with sweet tea for breakfast. Imagining what the food tasted like took the edge off our hunger and distracted out thoughts.

We also shared funny childhood anecdotes to make each other laugh and about our loved ones. I spoke about how on most mornings while growing up, my father and I would watch the sunrise together over a cup of tea or coffee before I went to school.

At one point we thought we were hallucinating from thirst and hunger when we saw something on the horizon. At first we thought it was a fishing boat. As we got closer, we realised that it was a large island. When we landed on the island, we tried to find out where we were. On the beach, we were surprised to find old beer cans and bottles. I remember seeing “VB” on one can, but I didn’t know what it meant. 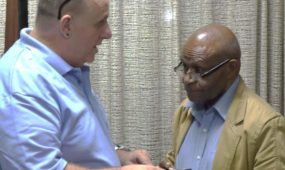 One of my fellow passengers suggested that we look for the words “Made in…” on the cans and bottles to help us identify our location. Even though we did not speak or read English well, we recognised the words “Made in Australia” on one can because many items sold in West Papuan markets are imported.

After a few nights sleeping on the beach, still uncertain about where we were, a fellow passenger went searching for food and any hint about our whereabouts. Upon finding a large crocodile warning sign, he quickly ran back to tell us of the danger of being on the beach.

Australian customs officers eventually came and took us to a detention centre. After our claims for asylum were processed and we were found to be political refugees, we began rebuilding our lives in the community. I am grateful to the Australian community for welcoming us with love.

This is the first time I have written my story. I have avoided writing anything that identifies me or my fellow passengers because West Papua remains dangerous for our families and communities and so we need to protect them.

Tens of thousands of West Papuan men, women and children have died at the hands of the Indonesian authorities over the last six decades. People tend to know a lot more about Timor-Leste (formerly East Timor) and their similar history.

I want readers to know about West Papua, to learn about what is happening to my people there and to talk about it.