Knitters, crocheters and sewers from the historic rural town of Harrisville recently gathered to celebrate the tenth anniversary of the local Anglican church’s industrious Women’s Shed.

Thirty-eight Harrisville locals marked the anniversary with a lunch at the Royal Hotel Harrisville, where they waxed lyrical about the shed’s history, including its remarkable community accomplishments. 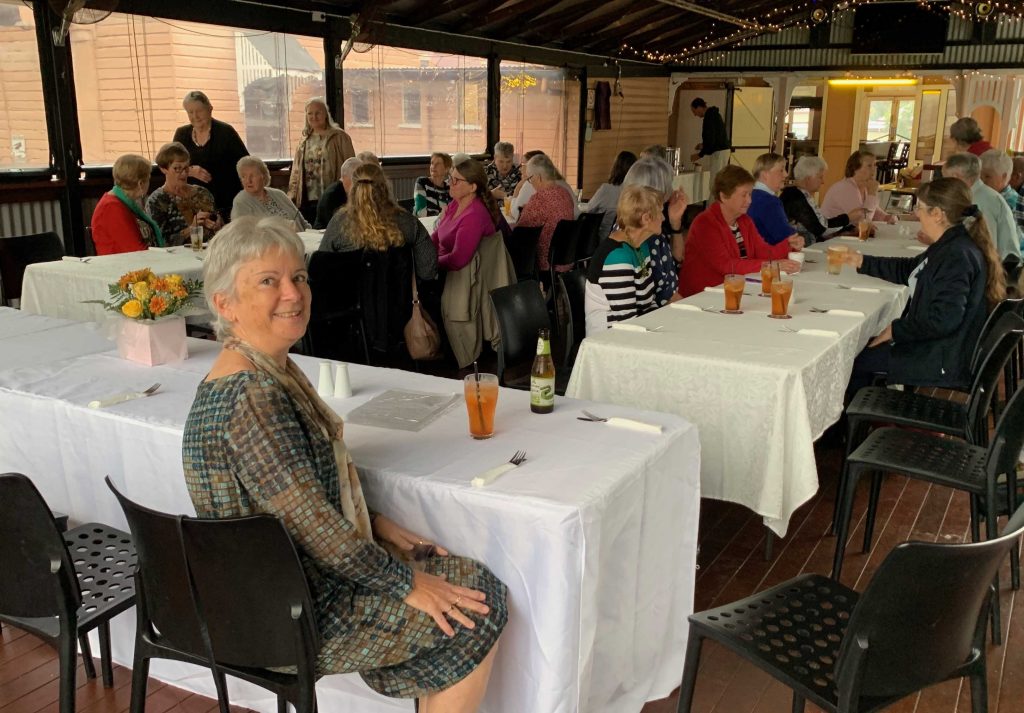 Priest-in-Charge of The Parish of Boonah-Harrisville, The Rev’d Helen Paget, said that since the shed’s 2012 opening, the group has knitted, crocheted and sewed thousands of items for vulnerable people, both locally and internationally.

“Twenty-four bags of baby jumpers were sent to Africa between 2013 and 2016 for the so-called ‘fish and chip’ babies – babies who are sent home post-delivery wrapped in paper like a serve of fish and chips because their mothers cannot afford warm infant clothing,” The Rev’d Helen said.

“The women also fundraise via raffles and event gold coin donations and have given tens of thousands of dollars over the years to the Archbishop’s Emergency Relief Appeal, the Country Women’s Association, the Salvation Army and the Romero Centre, which assists refugees, as well as other charities.

“For example, since 2012 the women have raised $27,000 for the Cancer Council’s Australia’s Biggest Morning Teas.” 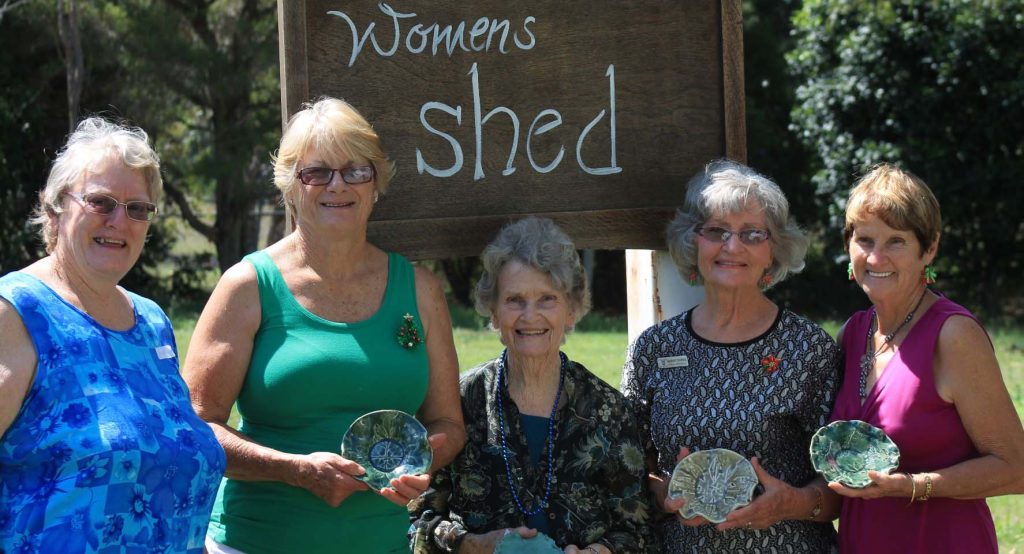 The group provides a support network for thirty-four retired women in their fifties and nineties, many of whom are widowed or live alone a long way from their families.

Women bring their own yarn and craft supplies to the shed gathering, which meets fortnightly on the second and fourth Thursdays of the month from 9.30am.

The shed is located on the grounds of St John’s Anglican Church, an hour’s drive south-west of Brisbane and 30 minutes south of Ipswich.

During the 12 May lunch, shed coordinator Charmaine Standfield presented the chaplain of Boonah State High School and Peak Crossing State School, Karl Spross, with a donation of $750 to support his school chaplaincy. 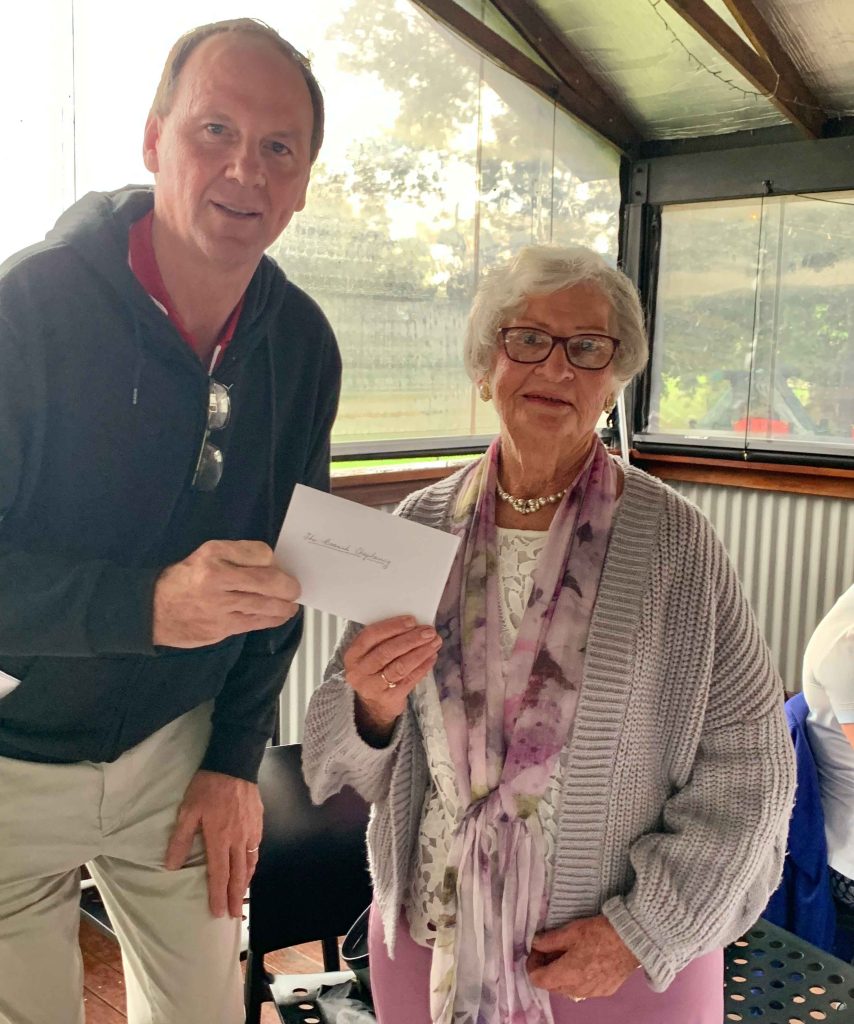 During the 12 May 2022 anniversary lunch, shed coordinator Charmaine Standfield presented the chaplain of Boonah State High School and Peak Crossing State School, Karl Spross, with a donation of $750 to support his school chaplaincy

Another $750 donation was given to Carinity Fassifern Community Centre and $100 was given to local radio station Rim FM after the event because their representatives were unable to attend due to heavy downpours.

Long-time resident Mrs Standfield, a parishioner of St John’s Church for 35 years, launched the shed in 2012 after the then parish priest The Rev’d Frances Andrews asked her to start a support group for young women in the Harrisville area.

“We found that there were not many young mothers in the area interested or available to meet, but there were a lot of older women who would benefit from a regular social gathering for mutual support,” Mrs Standfield said.

“I started the shed because I was looking at what I could do as a church outreach to the community where loneliness was identified as an issue – to provide a way for women to find friendship and companionship.

“A highlight for me was when an elderly lady, troubled by a family problem, was supported by the shed members – in her sharing she felt the weight of the problem had lifted.

“Families of shed members say they know when the ladies have been to the shed because their demeanour is more positive, and the women tell me that they no longer feel isolated and depressed, and that they have gained confidence.

“The name ‘Women’s Shed’ was chosen because they decided to do something while they gathered.

“While woodworking was not part of their wheelhouse, they knew they could knit, crochet, sew and fundraise for other organisations and charities.” 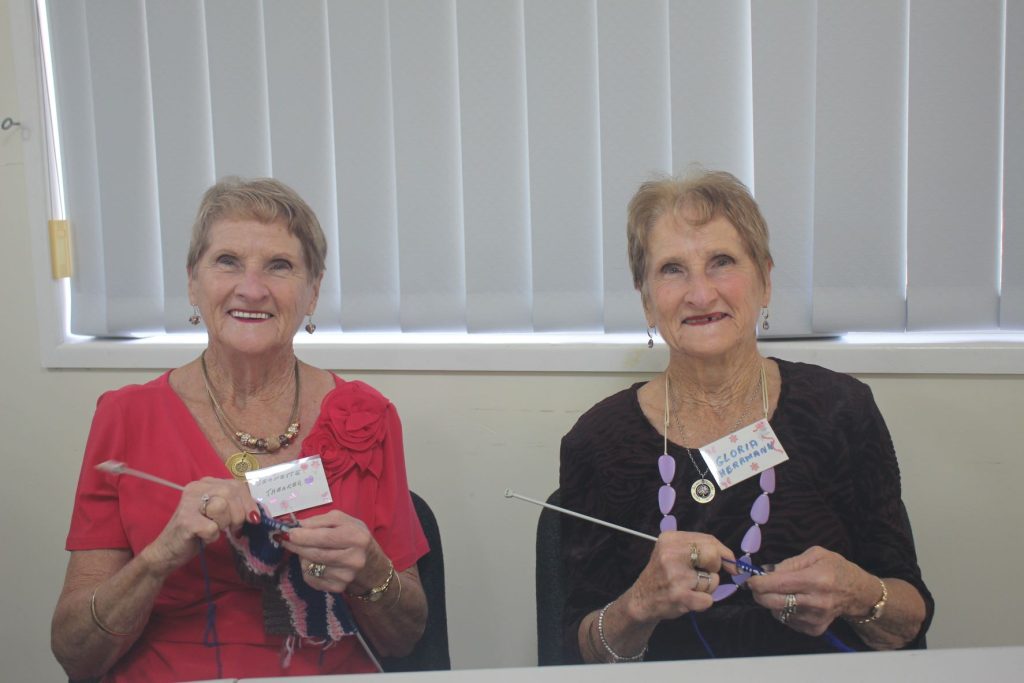 The Rev’d Helen said that the shed’s wonderful outcomes could not have been achieved without Mrs Standfield’s diligence and hard work.

“The shed has been led by Charmaine since its inception, but she is adamant that the success is not due to her, but the group,” she said.

“‘The ladies are the shed, not me,’ she told me, but without Charmaine, the shed would not be the success it is.”

So industrious are the shed’s members that just one year after the church’s Women’s Shed started, members created the winning float for Harrisville’s 150-year anniversary celebration. 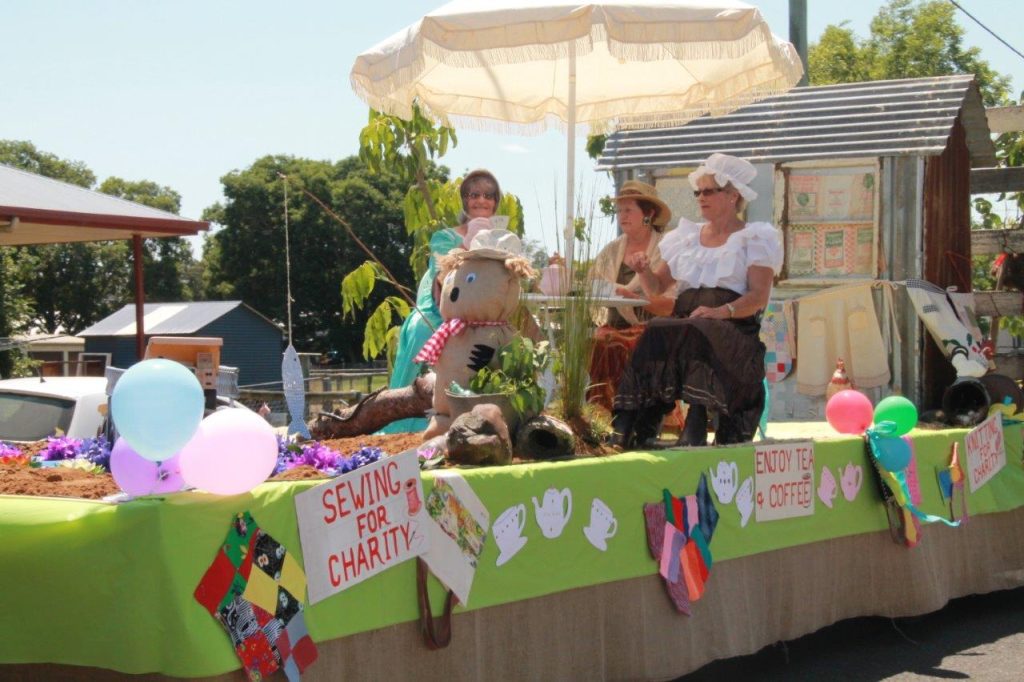 The rural town of Harrisville was created following Britain’s call for cotton when global supplies were curtailed during the American Civil War.

Brisbane merchant brothers George and John Harrison opened a store and started a cotton gin, which removes seed from cotton, in 1862-63.

The town was founded around the new cotton industry and named after the Harrison siblings. 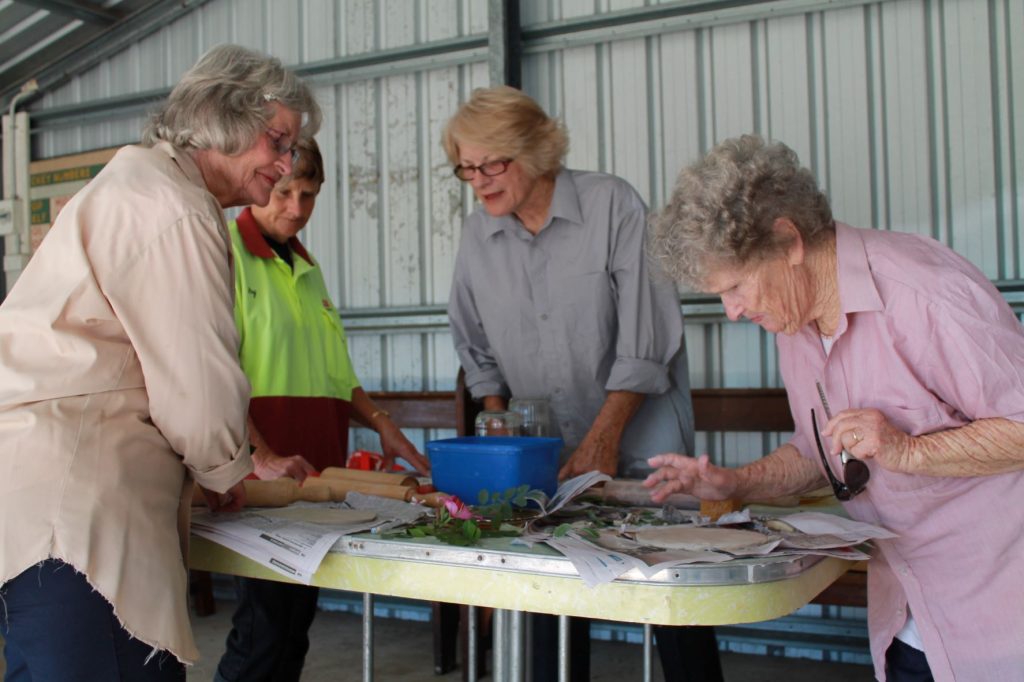 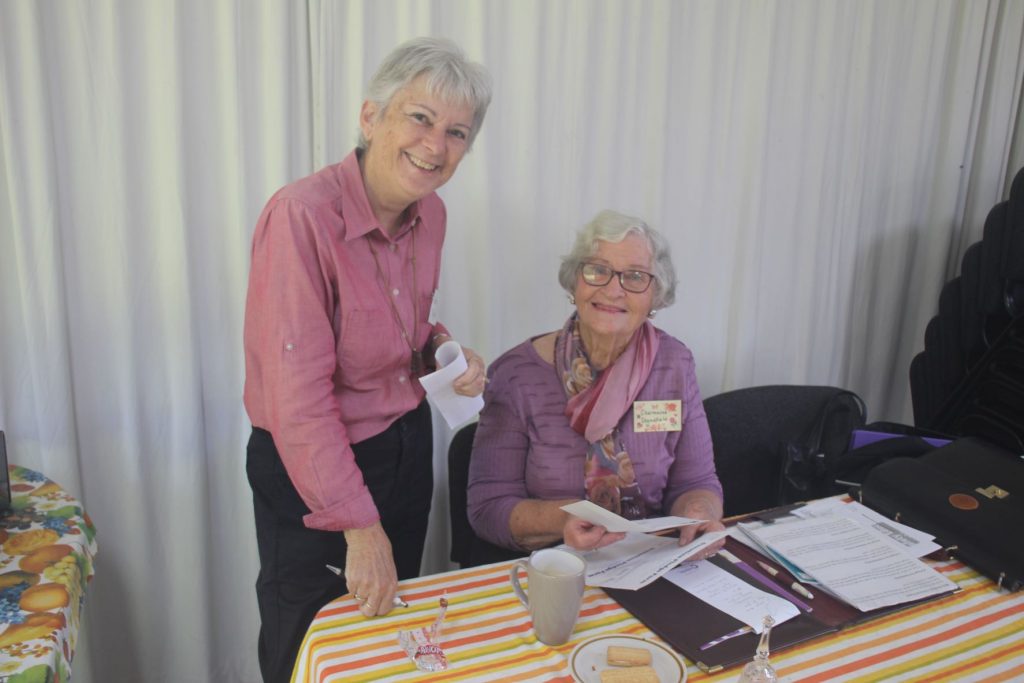 The Rev’d Helen Paget and Charmaine Standfield discussing a donation to Australia’s Biggest Morning Tea at St John’s, Harrisville on 26 May 2022