Cathedrals and churches will be celebrating the Queen’s Platinum Jubilee with a host of special services and events over the extended holiday weekend that begins on 2 June.

Lichfield Cathedral is one of 1,500 locations in the UK and Commonwealth to be lighting a Platinum Jubilee Beacon: an event during which the medieval cathedral will be illuminated in red, white, and blue. A town crier will announce the lighting of the beacon, and the Lichfield Cathedral Jubilee Choir will sing ‘A Song for the Commonwealth: A Life Lived with Grace’, written and composed by Lucy Kelly, from Australia, and Vincent Atueyi Chinemelu, from Nigeria.

The Archbishop of Canterbury has commented of the beacon-lighting: “This will be a moment of remarkable celebration as we join together across different generations, denominations, faiths, and communities all over the world in proper tribute to Her Majesty the Queen.”

St Asaph Cathedral will have a beacon ceremony, too, as will St John’s, Waterloo, in London, where the South Bank beacon will be in the churchyard; local choirs will sing the song — something that is happening simultaneously in 54 capitals in the Commonwealth in their individual time zones.

The Royal School of Church Music (RSCM) is commemorating the Jubilee with a special choral commission from the award-winning British composer Thomas Hewitt Jones.

“In Our Service” is a four-minute anthem, adaptable for different ensembles and situations, including a full symphonic orchestration available for hire. The anthem is available from the RSCM’s online shop to download as a music pack.

It has already proved a winner for the Choir of Royal Holloway, whose recording on YouTube had reached 163,058 views by mid-April. Royal Holloway’s connections with the monarchy date back to Queen Victoria, and the Queen visited the chapel soon after her Diamond Jubilee to bestow a Regius Professorship on the music department. 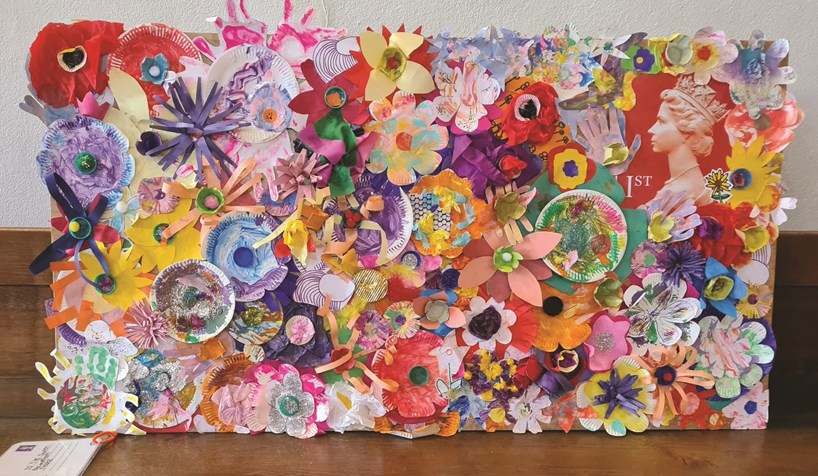 “It therefore gives us great honour to record this new composition in our chapel to mark the Queen’s Platinum Jubilee,” the choir’s director, Rupert Gough, said. “Her Majesty has imparted many words of wisdom in her speeches, and Thomas Hewitt Jones has been inspirational in joining these together to create an uplifting and heartening anthem of celebration.”

The charity Hope Together has also commissioned a new anthem, ‘Rise Up and Serve’, by Graham Kendrick, Mal Pope, and the contemporary worship band Rend Collective, for choirs to sing at Jubilee events and street parties. The Commonwealth Choir’s performance, filmed at the Tower of London, includes the British Gospel singer Muyiwa Olarewaju, who adds his own words of tribute to the Queen in Hausa, Swahili, Igbo, and Yoruba, with the Aldgate School children’s choir.

Hope Together, along with Biblica, has also published the souvenir gift book Our Faithful Queen, by Catherine Butcher. More than 268,000 copies have been bought by churches to give away.

The Church of Ireland has published resources for use in parishes, with prayers and suggested readings. The chaplain to the Liturgical Advisory Committee, The Rev’d Adrian Dorrian, said: “The Sunday of the Jubilee weekend is the Day of Pentecost — parishes will wish to consider how best to integrate a Jubilee service if it is taking place on this principal holy day. We hope these resources will be of benefit to those planning such services.”

Cathedrals are pulling out all the stops in celebration. Bristol Cathedral is hosting the Big Jubilee Lunch on College Green on Sunday 5 June: a variant on the annual nationwide Big Lunch for neighbours and communities, initiated by the Eden Project in 2009. It will be running activities throughout the day, hosting live performances, and, as the Big Lunch seeks to play its part in ending food poverty in the city, asking for donations for local food charities.

A free garden party is being held at Southwell Minster, in partnership with the Town Council, with musical entertainment, family games, and food and drink stalls. The Minster bells will play the National Anthem at midday, and the celebrations end with a Pentecost Jubilee service, involving all the churches in Southwell, at 3.30 p.m.

The Dean, The Very Rev’d Nicola Sullivan, said: “We are very much looking forward to hosting this special, once-in-a-lifetime celebration gathering the community to be together around the Minster. The Queen has served our nation and the Commonwealth with tireless devotion and dedication. Her wish is for this special weekend to be enjoyed by everyone; so please come to the party.”

Gloucester Cathedral has a packed programme of services, events, and family activities, including a Cathedral Corgi Trail and ‘Tea on the Green for the Queen’, served from its Monk’s Kitchen. The cathedral bells ring a Jubilee medley, and the celebrations conclude with a Service of Thanksgiving on Monday 6 June at 5.30 p.m., including Parry’s ‘I was Glad’, and Handel’s ‘Zadok the Priest’, both sung at the Coronation.

Bradford Cathedral’s Civic service of Thanksgiving on Sunday 5 June will be led by the Bishop of Leeds, The Rt Rev’d Nick Baines, with music from the City of Bradford Brass Band and the Cathedral Chamber Choir. It is saving the Jubilee Street Party for 11 June, the Queen’s official birthday.

Some churches are celebrating through craft: churchgoers and residents in Denmead, in Hampshire, have knitted and crocheted about 2700 red, white, and blue flowers, which have been sewn together to create long lengths of bunting to cascade around All Saints’. The Vicar, The Rev’d Emma Racklyeft, said: “It has been an amazing response to our appeal for people in the village — and their friends — to get knitting and crocheting, and the street party is a community event that the church is right at the heart of.”

St Luke’s, Southsea, starts the celebrations with a Commonwealth concert of art, poetry, and song on Monday 30 May, presented by refugees who meet in the church every Monday morning as part of a group hosted by Portsmouth City of Sanctuary.

Mindfulness of the economic situation is embedded in celebrations at, for example, Lichfield Cathedral, which is working with the city’s foodbank to appeal for special donations of food to families in need.

The Dean, The Very Rev’d Adrian Dorber, said: “On this joyous occasion, as we all celebrate in our own ways, it should be at the forefront of minds that there are thousands of households in the UK who are struggling to put food on the table. We are asking that all Lichfieldians, as they make their preparations for the extended Bank Holiday weekend, consider making a donation to Lichfield Foodbank.”

The charity Empowering Deaf Society is one of 70 organisations awarded a grant by the Platinum Jubilee Fund. It was awarded £50,000 over two years to transform an overgrown piece of land in the grounds of St Laurence’s, Barkingside, in east London, into a vegetable garden. The grant will also fund a second allotment in Waltham Forest, which is planned for next year.

The project will be opened officially on 3 June at 1 p.m. as part of the Platinum Jubilee celebrations. The Vicar of St Laurence’s, The Rev’d Chris Burrows, said: “We were delighted when Empowering Deaf Society approached us about using the church’s land. We are always looking for ways we can support the community, and hosting this project is a way we can practically offer support to the Deaf.”

The Royal Foundation of Saint Katharine is one of the Queen’s oldest charities, founded by Queen Matilda as a hospital for the poor outside the walls of the Tower of London. It has a full week of events at its retreat, conference, and community centre in Limehouse, where it works with some of the most marginalised communities in east London, from its base in the former home of the Sisters who inspired the TV series Call the Midwife.

“We are looking forward to celebrating the Platinum Jubilee, and we hope that our events will strengthen the ties amongst our diverse communities of east London.”

In a statement to commemorate the Platinum Jubilee, the Archbishop of Wales, The Most Rev’d Andrew John, and Bishops give thanks for the Queen’s reign and her “fondness” for Wales.

“Throughout her reign, Her Majesty has been guided by her Christian faith and has won the hearts of her people through a life of dignity, respect and commitment to them,” they write.

“We particularly appreciate the Queen’s fondness of Wales and remember with gratitude her many visits here, whether they were to celebrate with us or to share our times of grief and sadness. Her presence has so often been a source of comfort, reassurance, and steadfastness to many as the years have gone by.”

Churches and cathedrals across Wales will also be marking the celebrations with special services on Sunday 5 June. Other events include a Jubilee Crown Festival at St Giles’, Wrexham, with a suspended 8ft wide model of the St Edward’s Crown. St David’s Cathedral is displaying a section of the “golden carpet” used around the throne in Westminster Abbey for the coronation; and the Bishop of St Asaph, The Rt Rev’d Gregory Cameron, is to perform a coronation re-enactment by at Ysgol Maes Owen, Kinmel Bay, on Friday.