Every year St John’s College within The University of Queensland hosts the dinner to honour the academic focus of the college and recognise and celebrate students’ scholarly achievements.

This year students and other guests were fortunate to hear from Professor Hoegh-Guldberg FAA, who is one of the most highly-cited researchers and influential people in climate policy globally.

Professor Hoegh-Guldberg, who is Professor of marine science at The University of Queensland and Deputy Director of the ARC Centre for Coral Reef Studies, received the Prince Albert II Climate Change Award in 2014 and the Banksia Foundation’s International Award in 2016.

At the dinner, Professor Hoegh-Guldberg spoke about the severe impacts of climate change on Queensland’s Great Barrier Reef over the last 10 years.

“Fifty per cent of shallow water corals on the Great Barrier Reef have died in the last decade, along with countless thousands of associated species and dependent industries, such as tourism and fishing,” Professor Hoegh-Guldberg said.

Professor Hoegh-Guldberg’s words also inspired students and other guests to more urgently address climate change, particularly as he spoke about the future career pathways that will arise.

“While we must reduce emissions of greenhouse gases to below zero or face a very punishing future – we also need to recognise that climate change is also a huge market opportunity with some pretty unambiguous directions for future investment,” he said.

“If we can stabilise the climate over the next two to three decades by rapidly reducing emissions of greenhouse gases such as CO2, our world will be full of opportunities for people from almost every employment sector.

“To combat the loss of agricultural productivity in Australia’s drying southeast and southwest, we will need experts that can develop new temperature tolerant crops – as well as farming techniques that increase the efficiency of water use.

Professor Hoegh-Guldberg spoke of his 30 years’ experience, focusing on what led him to pursue what would become a ground-breaking career.

“I spent a significant amount of time as a youngster exploring the natural forests and estuaries of northern Sydney. These experiences led me to a career in the natural sciences,” he said.

“I was very much into ‘science for science’s sake’ – and soon – as a young academic – I expanded my studies to reefs worldwide, including the Great Barrier Reef. I was fascinated by ‘what makes a coral reef tick’.”

“His points were sobering, but I was inspired to see students respond so positively to his clarity around what was needed to harness the impact of the technology already available to help address the climate challenge,” Professor Terry said.

“I was so impressed with the students’ achievements, particularly given the ongoing impact of the COVID-19 pandemic,” she said.

“It was a great pleasure for me to have the opportunity to attend this year’s St John’s Academic and Professional Dinner.” 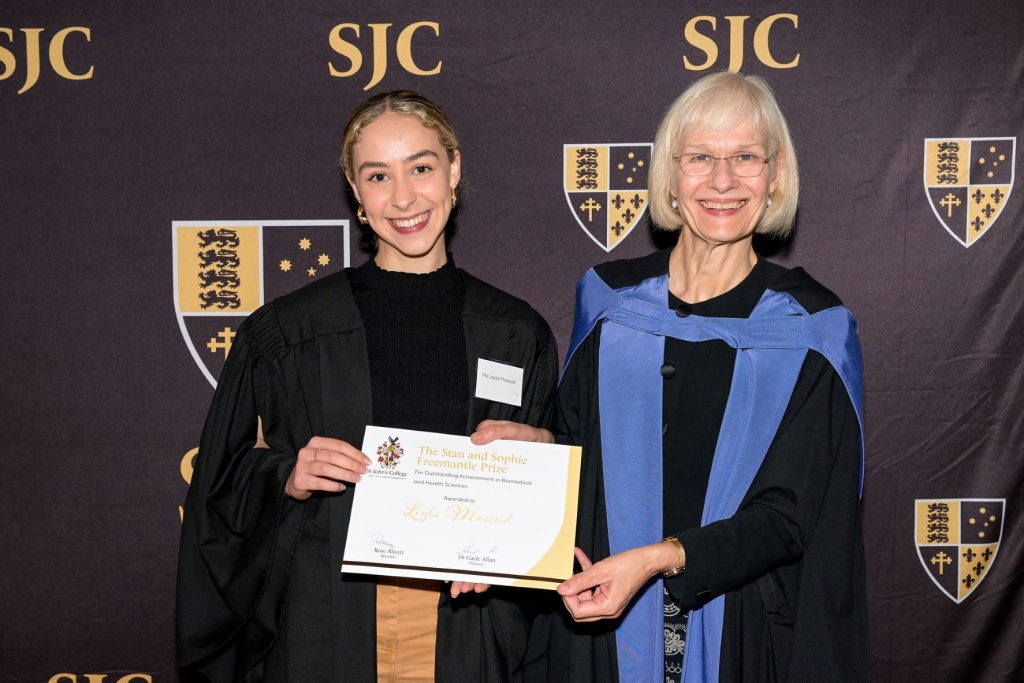 Ms Massoud said that Professor Ove Hoegh-Guldberg’s speech changed her perspective on damage to the climate.

“We often hear of only the negative effects of climate change, which can make one quite fearful for the future ahead,” Ms Massoud said.

“Professor Hoegh-Guldberg offered us a different perspective on climate change, and he showed us the possibilities of the future. It definitely had an impact on many, including myself.

“His speech was incredible, and I am very grateful to hear from someone who not only has a considerable amount of expertise on such an important subject, but who sees hope for the future of humanity.”

He, too, was impressed by Professor Hoegh-Guldberg’s speech, particularly the action he encouraged people to take.

“I think our guest speaker did an amazing job in highlighting the fact that climate change is both a threat to the planet, but also a calling for the people to do something about it now,” he said.

“He emphasised that there is an opportunity before us to change the way we, as humankind, live and behave.”