Anglicare Southern Queensland has this week welcomed the announcement from the State Government of funding for the needs of all young people in care up to age 21 so they can be better supported to transition into adulthood.

Minister for Children Leanne Linard and Premier Annastacia Palaszczuk made the announcement on Saturday 18 June, promising three extra years of extended care and support for all young people in foster, kinship and residential care.

An additional $400,000 has also been committed over four years from 2022–23 for implementation and evaluation activities, including focus groups with young people across the State to hear directly from them about the kind of support they need.

Anglicare Southern Queensland has played an active role in the Home Stretch campaign, an alliance of major Queensland care providers that has been advocating for extended care for more than three years.

The campaign has been based on international evidence from the US and UK showing significant reductions in homelessness, poor physical and mental health, unemployment, and other negative life outcomes from extended care policies.

Anglicare Southern Queensland Executive Director Sue Cooke said that the Queensland Government’s announcement of extended care until the age of 21 from July 2023 is a “game changer” for young people in the care system.

“After years of advocacy from right across the human services sector, we’re thrilled to see that the Queensland Government has heard the voices of young people and the staff who support them, and extended the option of care for three extra years,” Mrs Cooke said.

“This single decision will make all the difference in the life of our most vulnerable young people, as well as their children for generations to come.”

Anglicare Southern Queensland’s Group Manager for Children & Families Tammy Lloyd said that most young people leaving home have the support of their parents or other relatives to help them navigate the challenges of independence.

“Extended care will provide young people leaving care with the security they deserve and reduce their chances of being homeless and unsupported in these crucial early years of adulthood,” she said.

“We’re looking forward to our young people participating in the consultation over the next year to help shape what extended care will look like in Queensland.”

The announcement was also very welcome to the eleven young adults who featured in a series of Home Stretch videos launched at New Farm Cinemas at the end of April.

The young people shared their experiences of being forced to exit the care system at 18, and talked about the ways in which the option of extended care would have made a positive difference to their lives. 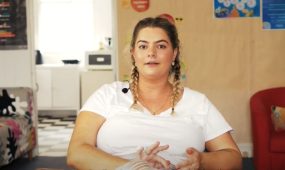 Among the young people in the video was Jessie, who was placed in care at 14, exited care at 18 and has recently been studying human services.

“Leaving care was quite challenging to say the least. I know so many young people who exited care on the street, and I watched that happening and it was really confronting,” Jessie said.

“Not a lot of 15-year-olds that I have met outside of care are thinking about — where am I going to live in two, three years’ time?”

With the announcement over the weekend, Queensland joins all other states and territories except New South Wales in a commitment to extended care.